I don't know about you but I do not really watch a great deal of television. Most of what comes on is of little interest to me. The only genre I do regularly watch is anything to do with wildlife and nature. When my two Orangettes were younger one of their favourite programmes was basically anything that Steve Backshall was in - various National Geographic progammes, 'The Really Wild Show' and perhaps their favourite of all 'Deadly 60.' They have of course got to an age where they have almost left such programmes behind but the chance to see Steve Backshall live in person at Whipsnade Zoo was too good an opportunity to miss. 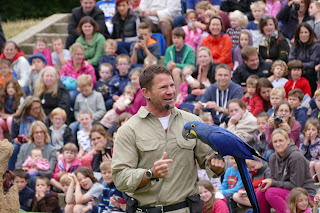 Whipsnade have been running their 'Deadly Explorer Trail' since 18th July where you or your little ones can learn how to be an explorer, learning all the skills you might require. There were some adverts for 'Deadly Summer Shows' at which Steve Backshall would be there live to present some of there zoos own deadly residents. I said to the Orangettes that I was booking for us to see Steve Backshall and if truth be told I was perhaps more excited than they were. 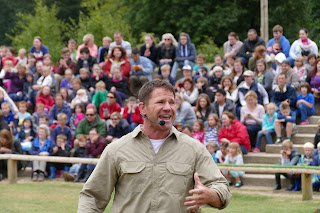 Arriving at the zoo in good time a queue had already formed and soon we were in it. We didn't have to wait too long and before we knew it we were seated and waiting. After a little build up out Steve came with an assortment of several parrots that instantly flew skyward. It was quite an opening. Some soared in a huge arc, while others flew just above the heads of those seated. 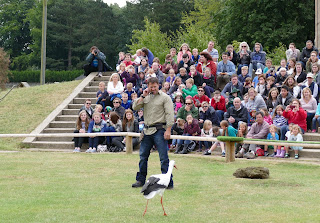 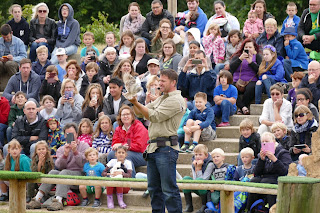 Steve was a very skilled presenter and engaged the crowd straight away. His knowledge about the animals he was presenting was extensive and he delivered it in an informative and enthusiastic manner. 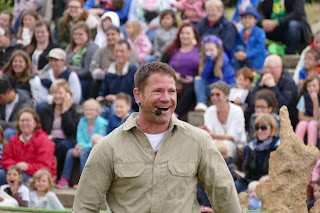 When certain birds didn't cooperate he was unfazed and carried on like a trooper. 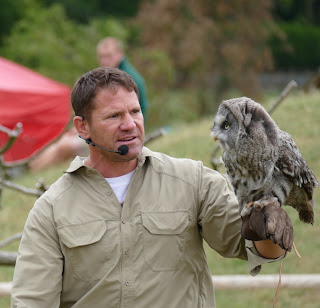 At one point in proceedings he opened the floor up to questions. A few children were lucky to ask their hero a question or two.

Sadly after 30 minutes which seemed to feel like 5 the curtain had to fall and the 'Deadly Summer Show' came to an end. Steve suggested that children line up in a great big semi-circle facing outwards and he would come along and pose for photos, as long as parents were at the ready with their cameras. I cannot tell you how I resisted the temptation of lining up among them to see the look of horror on my Orangette's faces. 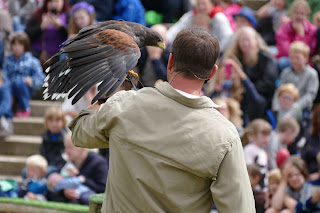 Sadly, this was the last of the shows, so you won't be able to see him until he does it again in the future. As you may have guessed I like the 'Deadly 60' programmes and wish that Steve would make more of them and some more adult orientated nature programmes. He seems very sincere, passionate about what he does and for my money a very good presenter. The only thing now is to get a signed photo!
at July 27, 2015