Last Sundays ride was going to be the longest so far this year. It was the 'Evans Cycles West London Sportive.' I intended to cycle the 54 miles of the medium route but ended up cycling another four miles. Read on to find out why. 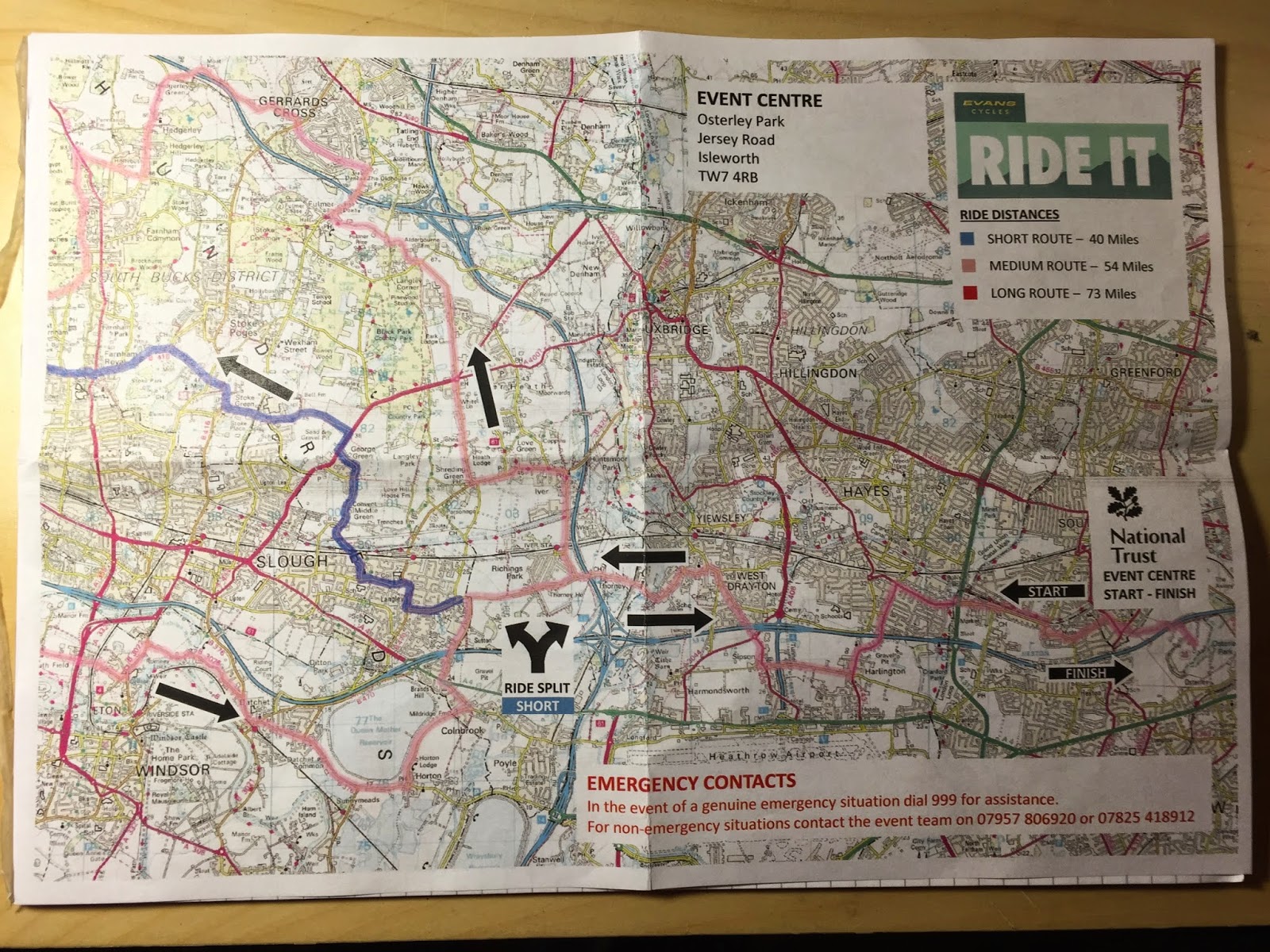 The start of the Sportive was Osterley House which featured in the New Years Day Ride.  I arrived in good time and saw and soon caught up with Chris B on her pink Brompton and various pink items of clothing. I really cannot understand why people do this!

Once in view of the Big House we saw lots of other cyclists in line so we joined them. It soon transpired that we had in fact joined the start queue and not the one for registration. On route to registration we saw the smiling face of Zoom Zoom Brompton and later Anne and David.

Just after 09:00 (I think) we set off. As usual David set a fairly quick pace and the group started to spread out as is natural on these sorts of rides. I had brought a camera with me and 2 x spare batteries but I should have left it all at home as these sort of rides don't really lend themselves to stopping to take photos. In fact you think I would have learnt my lesson from the 'Mitie Revolution' last year. That ride was a killer and 100+ miles. It did not stop yours truly from taking arty shots of lone trees in fields and alpacas being chased by dogs! What was I thinking?!!

The ride was very well organised by 'Evans Cycles.' Pink direction signs were placed well and even I was able to follow them...well for the most part. (More about that later). At about an hour into the ride we stopped to regroup and were joined by Guy (veteran of many a ride) on his new titanium Brompton which I have to say looked pretty fine. It was lovely to see him and we hadn't realised that he would be on this ride.

Setting off we thinned out again and it was just David, Zoom Zoom and myself for a while. There was a pretty steep series of hills but nothing we couldn't handle and if anything we had experienced much, much worse. David was in good form and ascended all hills on his 54t chainring as if his Brompton were part powered by a concealed motor.

Arriving at the first feed station we were able to stock up on cakes, crisps, peanuts, gels and water. It was exactly what you would want and although it didn't have any thrills it was excellent. In fact I hope that the same would be on offer at the final feed station.

Guy was on the longer route - 74 miles - said his goodbyes and was soon off into the distance. Hopefully he will be seen on other rides in the not too distance future. The rest of us pressed on again towards the last feed station.

It was a very cold day. Initially I could not get my hands/fingers warm but gradually they started to feel better after an hour or so. The sun was out and if one suspended belief one could almost imaging it was a lovely spring / summer day. This route would make a lovely ride when it really is spring / summer and I suspect the route (longer version with a few more hills) will appear as a future ride.

When ascending the steepest hill I heard something knocking against the front forks and to my horror saw that my Edulux II light had sheared off its bracket. Luckily I had all but reached the top of the hill and when I came to a stop David helped me tie it up. In fact David - who has the same light - informed me that the exact same thing happened to him with his. Thankfully I had a spare bracket at home and the light was undamaged. 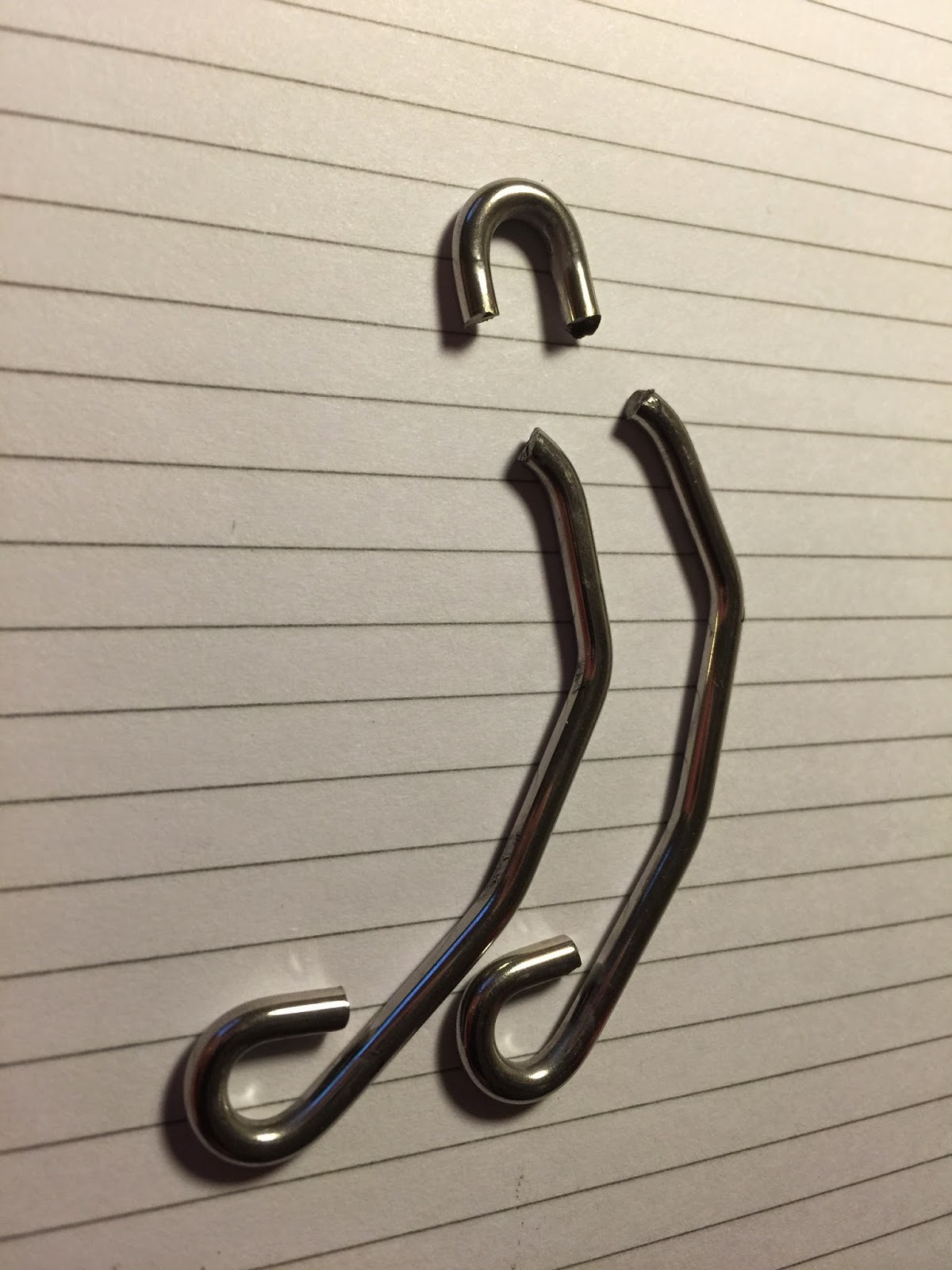 The final feed station was actually outside an Evans Cycle store. I am happy to report that refreshments were exactly the same as before. With only a just a little over 20 miles we pressed on for the end. Dr Chris, like a few other Bromptonians was on the longer ride but had caught us up and joined us for the last few miles. David set a blistering pace and Dr Chris and I kept with him for a good 10 or so miles.

Traffic lights and heavier traffic played their part to further thin us out and soon David and not long after Dr Chris were way in the distance. It was roughly at the 50 mile point that my woeful navigational skills came to the surface as at the junction of a very busy roundabout I became hopelessly lost.

Getting lost is nothing that unusual to me. The thing with getting lost is not to flap about it. I asked a shocked passer by for directions but unfortunately they didn't speak English - typical. I therefore resorted to Google Maps on my trusty iPhone and its excellent spoken commands. Having this at full volume, while riding an orange Brompton requires a certain thickness of skin. I must have looked like some sort of junior Minister on a fact finding tour of inner city cycleways.

Following Goole Maps and its spoken commands religiously - as I was at this point desperate and without a clue where I was - I ended up cycling on a very busy stretch of road called the A312. I think I remember it as a route towards Hampton Court. I like Hampton Court and keeping this happy thought in my head I cycled along a near motorway.

I was beeped and treated to some pretty rare language i can tell you as I cycled along the A312. Wanting to live another day I dismounted and decided to cycle along a stretch of pavement. Feeling much better I cycled further until disaster struck and said pavement ran out. Back on the open road again and still following the spoken commands from Google Maps I somehow managed to see the familiar sight of black arrows on a pink background!

Back on track and with Google Maps telling me to 'turn around' I stoically cycled on. At nearly 58 miles - a few more than billed - I crossed the finished line. I was greeted by David, Anne and Zoom Zoom who having travelled the correct route, finished some time before me.

This was a great little ride, well organised by Evans Cycles and certainly something that I would like to do again. Well...the part about getting lost I'd like to avoid and along with going anywhere near the A312 even if towards Hampton Court!

Going home my knee felt pretty good and I certainly wasn't suffering from having cycled 58 miles at an average of 13.5mph. Hopefully there will soon be many more rides in the calendar and yours truly cannot wait.