On Saturday morning I rose in good time and was off for a journey into the unknown. Many a time I had been along the Thames heading east, but rarely have I travelled west and then south. Saturday was the Wander Trail Wander - the brainchild of David and Anne.

I have written before that my navigational skills are dire. The meeting point was the Look Mum No Hands coffee kiosk located under Hungerford railway bridge. I had a vague idea of where I was going so setting off from St John's Wood I made it to the Royal Festival Hall. This is where I got lost! I typed the desired location into Goole Maps and got it to make a route for me. Trying to follow this as best as I could, with a combination of walking, cycling and complete good luck I saw the familiar faces of David, Anne and ever stylish Floyd. Introducing myself to some new faces I returned to David to curse the merits of Google Maps.

That done we were off. Weather wise it had already rained a little on my way to the meeting point but as we set off it was fine. Our first stop was to take a few pictures of the Houses of Parliament. I have always thought nice building, shame about its occupants. 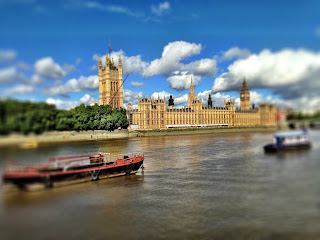 At Albert Bridge I was given the task of taking a group photo. You can see my rather lovely Titanium Orange Brompton bereft of owner. 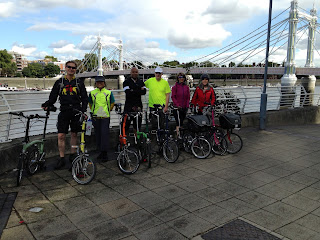 As we cycled along a few buildings caught my attention. The first reminding me of Goldfinger's brutalist style. I quite liked it. It was not far from here that the first of two strange things were seen. In the distance I saw a 30 something male wearing Lycra and a lime green ballet tutu. He was on his own and performing some quite professional looking tours en l'air, sauté de chat, sissonne and pirouettes. It was as I am sure you can imagine very eye catching. I must say that it must be doing him some good as he looked very athletic. 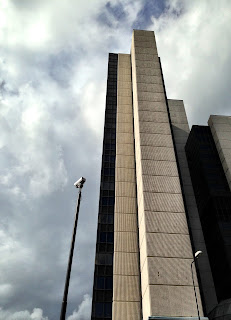 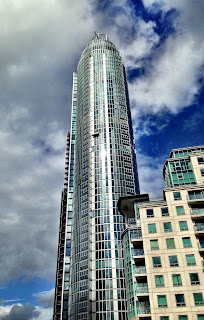 As we cycled adjacent to the Thames we got some lovely views. I stopped where I could to take a few photos and then cycled quickly to catch the group up. 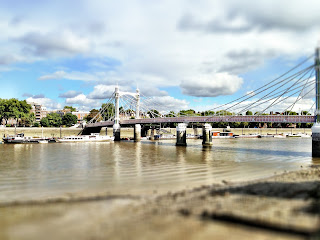 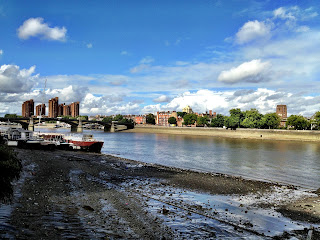 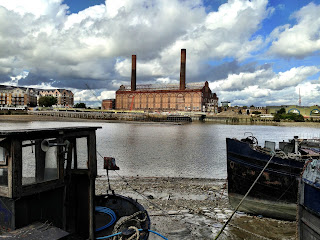 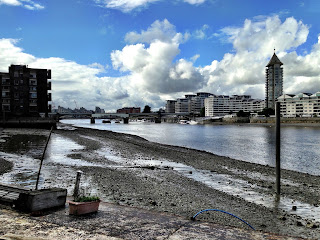 We arrived at Merton Abbey which was a lovely place I had not heard of before. In its near past it was home to all manner of arts and crafts industries, including the Liberty Print Works which supplied the famous shop in Regents Street. After a very tasty Brazilian pastel - a thin pastry envelope that can be filled with just about anything and a mean milkshake-type drink we headed off again. 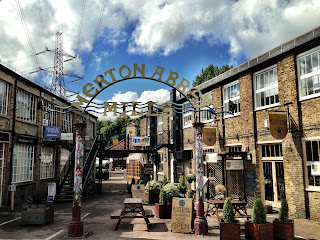 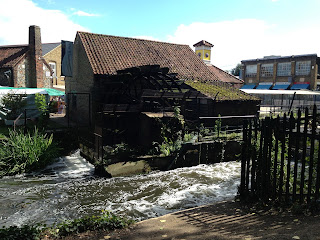 Reaching Carshalton Ponds it was again photo time before heading back on our loop. Just before arriving at Carshalton Ponds we past a pub where traditional Morris Men and Women were getting ready to dance, or whatever it is they do. As we past they cheered and waved. We reciprocated.

When passing them a second time they were off down the High Street. It was at this point that we saw the second and last of the strange things I alluded to previously. A large straw or perhaps wicker construction was also being marched up the High Street. Having remembered sneaking down as a child to watch the film 'The Wicker Man' when it appeared in one of the BBC's Horror Double Bill, I did not hang around to see what happened!! 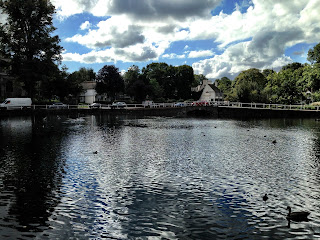 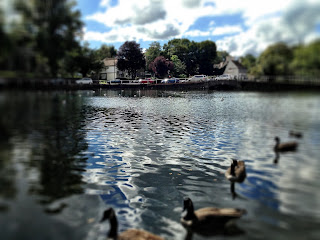 Arriving back at Merton Abbey we sampled the delights of a Belgium Waffle establishment before making our way back to Clapham Junction. Saying our goodbyes we wet our separate ways and on the train back into central London I thought that this particular ride would be yet another to repeat. The great thing about rides like this is that you end up meeting someone you know/ someone new and seeing lots of places you didn't know existed.


Being an early riser I was off to Richmond Park nice and early. Last night I had given my bike a good clean as my entire family made me watch. 'Strictly Come Dancing.' I cannot say I enjoyed it greatly but giving the bike a clean acted as a form of sanctuary.

My parents are to blame for me liking the rain and rising early. They still take the view that rain should not stop you from doing whatever it was you intended on doing and that getting up late wastes the day. Even though rain was on the cards I still wanted to head out and early.

I opted for Richmond Park as it provides a reasonably demanding circuit. Added to this is the fact that it is only a 30 minute car ride from where I live at this early on a Sunday morning.

It was busy last week but this morning seemed to me a couple of levels up. There were dozens upon dozens of cyclist out in force and as many cars driving through! 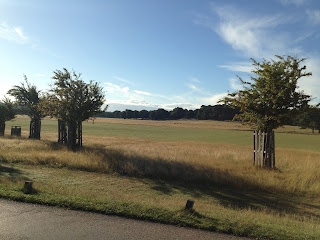 I  only had time for three laps as I wanted to be back home by 10:00 so we could venture out. My first lap not shown in the data was hindered by cars that appeared terrified of passing any cyclists. (If only they were like this on the roads outside)! I remember that it was hovering at about 16.3 mph despite this.

I did however record 2 x laps. The first looked to be pretty good and was averaging over the 17 mph mark that I wanted to finish on. It was scuppered by a number of cyclists riding three abreast at about 14 mph. I was unable to pass them for ages as there were either cyclists the other side of the road or cars trying to overtake. It was pretty selfish but it did get worse.

On the second lap just past the big hill and on the straight, a peloton of 5 - 6 cyclists tore past me at speed incredibly close. A chap on a mountain bike motoring ahead was almost hit and slammed the brakes on which slowed me down as I did the same not wanting to go in to the back of him.

I was still pleased that I managed to average more or less the same as last week. I am hoping that if luck is on my side and I have a clearer run of things I will be able to finally get an average of 17 mph or better.

The weather has definitely turned to autumn as I felt the need for a long sleeved top yesterday and this morning. On Friday night/Saturday morning I have a night ride from London to Southend which I am looking forward to a great deal. It won't be long until I will be layering up and taking my waterproofs with me. It will also be time to decide finally on whether to keep the Kojaks through winter? Whatever happens I will be out on my Brompton in all weather!