A few years ago I owned a Garmin Edge 510. For me this was a near perfect sized GPS device and although I eventually ended up with an 810 - as it had navigational features - I still liked the form factor of the 510.

A few week after Garmin's flagship Edge 1000 was released, the kind people at Garmin let me test it for a few weeks and although a big improvement over the 810 I didn't care about the extra screen size. Garmin released an update to the 510 in the form of the 520 and despite its looks and it diminutive size which I liked a great deal, the fact it could not give you turn by turn navigation meant I passed it by.

Zoom forward to July 2016 Garmin released the update to the 810, the 820 but instead of keeping things roughly the same size as the 810, it resembled the 520 more. Added to this it had turn by turn navigation.

I have been very lucky to have been given a Garmin EDGE 820 for a few weeks to review and having used it for a couple of weeks already I am in a position to write about what I like and don't like. 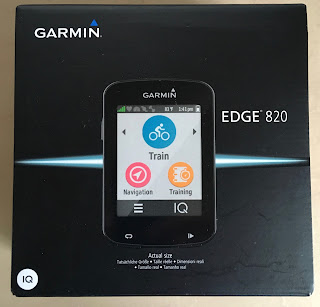 As already mentioned, I really like the size. It is lightweight and compact and the 2.3 inch screen is a much higher resolution than the 810. The screen is capacitive and Garmin say it works when wet or wearing gloves. I can say it definitely works when raining. It is summer so gloves aren't a requirement yet - even in a British summer - but I did put a pair on to try and the screen can indeed be operated using them. 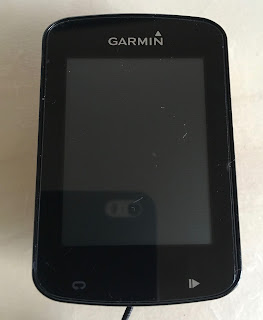 There is nothing different about the quarter turn mount and the 820 comes with a Garmin out front mount and a couple of standard mounts and various O rings. 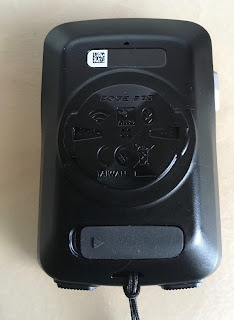 Also included is a tether and despite not using this on any other Garmin device I have owned, I decided to use it on the 820 while under review. 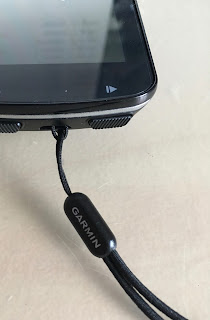 The 820 only has three buttons. Two on the bottom for start/stop and lap and one on the side for on/off. 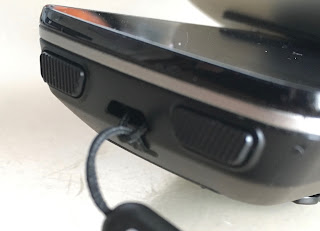 As far a battery life goes it is quoted as 15 hours or 24 hours in what is called UltraTrac mode which is an energy saving feature. I have been on a a night ride with my phone connected by bluetooth, cadence and speed sensors connected, riding for a good nine hours with the ride being recorded and the battery registered 43%. It is of course waterproof and able to cope with wet weather.

The screen is bright and easy to view in all lighting conditions. There is an ambient light sensor that automatically adjusts the brightness of the screen. This actually works pretty well and can be turned off if not required. One thing to say about my photos. They have been cropped and if viewed at full magnification it looks as if the screen is pixilated. It isn't and this is just the screen being magnified.

You can set up several profiles on the 820. I have three so far which takes care of all my bicycles. One thing to note is that the slightly cheaper Explore 820 does not allow multiple profiles and does not have the ambient light sensor. 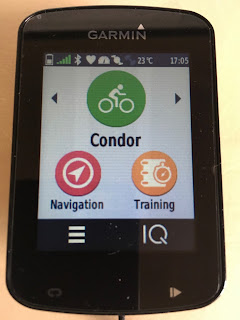 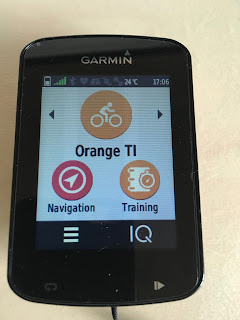 As far as data screens go, like the 810 and 1000 you can set this up to your personal preferences. It is very easy to do and if you want to change a field you simply tap and hold and a menu comes up to change it for something else. The amount of customisation is vast and there is more than enough for the hardened geek, club rider or professional. 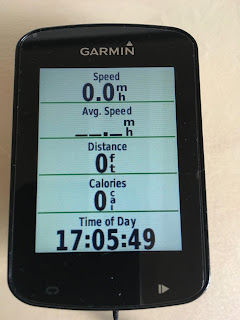 A new feature for the 820 over the 810 and 800 is the ability to connect to Garmin's IQ store. Essentially this is a little like an app store for your Gamrin. There is an ever growing library of free material that can be quickly downloaded to your device. At the moment this includes various data fields and graphics that are different from the stock layout. 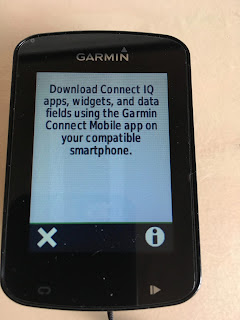 Another new feature over the 810 and 800 is that you can swipe down to reveal some of the more important functions. For example from this you can turn bluetooth on and off. You can adjust the brightness or set it to the ambient sensor. You can connect external sensors such as speed, cadence, heart.

The 820, like the 1000 when contacted to your phone alerts you when you receive a text message or call. You cannot take a call or send a message via the 820 but you know someone has tried to contact you. This feature can be turned off but I have found it pretty useful. 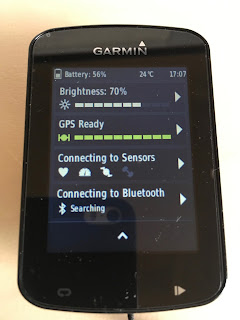 Navigating is excellent on the 820 and for me more usable than the 810. It uses GPS and GLOSNASS satellites to locate your position and when turned on locks on a GPS signal very quickly, more so than the 810 which I believe only has GPS and not GLOSNASS.

My 810 had maps on a SD card which was an additional extra. The 820 has then built in. You can enter points of interest, stations, intersections and postcodes which then quickly provides a route for you follow with turn by turn directions.  The 810 has this but the 820 seems to be able to update more quickly with little in the way of delay from making the turn to what happens next. In addition the smaller screen didn't detract from me - yes me - being able to use the 820's turn by turn instructions to navigate. This might be in part due to the higher resolution of the screen.

One feature, which is for me at least, is nothing short of brilliant is the ability to get audio prompts while navigating. This works when paring your phone to the 820. Once paired the 820 sends audio prompts for navigation to your phones speaker. This really does work well. I have used it with just the phone in the chest pocket of a jersey and I could hear the prompts. Better still you can use one headphone bud or a small bluetooth speaker. I am normally hopeless at navigating but I have found that I have actually managed to get from  A to B using the 820. This has been a little bit of a revelation for me and quite liberating. As a result I have used it to cycle to a few locations I previously would have struggled to get to. A smartphone with google maps or a specific mapping app are of course better but I am really enjoying the 820 as far as navigation goes.

There is also a round trip feature. With this you can select a route of say10 miles. The 820 will then make a couple of routes for you to choose from that will be 10 miles and return you to your start location. You can select things to avoid like main roads, hills etc.., and having tested it out it is very good. I can see myself using this as a training aid if I got bored of my usual circuits around the block as it were. 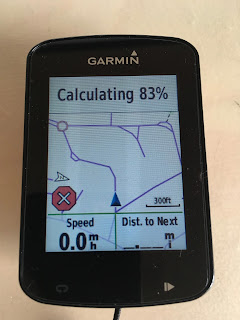 GroupTrack is a new feature that I believe with come to the Edge 1000 in the future in a firmware update. With this once your 820 is connected to you phone you can keep an eye on friends - with and 820 or 1000 (when the firmware update allows) as they show up as markers on the map. I can see this being of great use on rides when riders thin out and are separated or when the front is seeing where the tail is. You can keep track of up to 50 other riders.

The LiveTrack feature on my 810 was a little bit hit an miss at times. This feature essentially allows people you have chosen to view realtime on a map your location. I have enabled LiveTrack on almost all the longer rides I have been on since getting hold of the 820 and I have to report that it worked 6 out of 7 times. 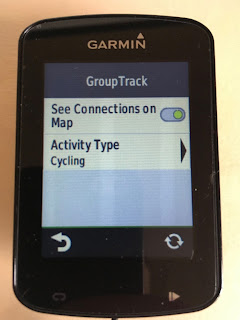 If you have a good ride stored on your 820 you can transfer it quite easily to a friends 820. This is done very quickly and a ride leader could transfer the official route to participants with an 820. 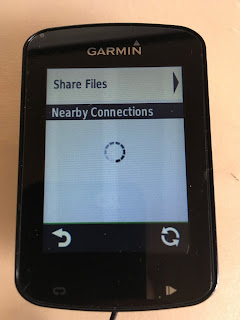 The 820 has a built in incident detection that sends out your location to an emergency contact if you are involved in an incident. It does seem like a good idea but I have not activated it so far.

The 820, like the 1000 has Wi-Fi. This means that when you step through the front door your ride data will be uploaded to Garmin Connect by the time you have put your bicycle away. This auto upload feature can be turned off but it is very useful. 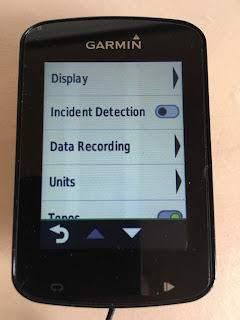 I only have a few more days with the Garmin 820 before I have to send it back. I have really enjoyed using it and haven't even scratched the surface with all the more advanced feature packed into this small package. I suspect that Garmin will release an update to their 1000 at some point in the not too distant but for me, the size and compactness of the 820 would be very compelling.

The Edge 820 comes in three different packages. The Explore 820 is £279.99 but lacks Wi-Fi, ambient light sensor, live Strava segments and some of the other serious training data like VO2, Watts, lactate threshold.

The Edge 820 - which is the one I have here is £329.99 and a version with a heart rate monitor, cadence and speed sensor comes in at £389.99. If you shop around you can probably get each for a little less, but don't expect a huge reduction. Until recently only a few select retailers were first in line well the 820 but I think it is now widely available.

Is there anything I don't like? Well, not a huge amount. I have noticed that occasionally it cannot pick up WI-Fi when I am standing next to the router. Perhaps a firmware update can fix that? The only other ting is that I do think it should come with the rubber protective cover/jacket rather than having to pay possibly £10 extra. Apart from this, as stated not a huge amount.