This morning it took me a little longer to get up as I had stayed up to watch some of the opening ceremony, before my eyes felt so heavy I could watch no more. What I saw I enjoyed and I made a mental note to dip in now and then to watch various sports.

The meeting point was outside Kew Gardens at 10:00. With my car parked I put the front wheel of my bike back on, pumped the tyres and got myself ready for the off. Dr John arrived more or less when I did and making my way to the official meeting point, some 100 metres away I saw that almost everyone was there. David - our ride leader, Anne, Chris, Zoom Zoom, Rob, George and friend and Jack.

Poor David was still suffering from laryngitis and was hardly able to talk. Anne stepped in to provide a set of brief instructions and not too long after 10:00 we were off.

The weather was glorious and I had thought it best to apply some sun cream before leaving just in case. It was in this lovely weather that we soon reached the outskirts of the rather lovely Osterley Park and its rather magnificent house.

I cannot be sure for certain but I think the last time I was here was at an Evans Cycles sportive  about a year ago. I recall that the weather wasn't too wonderful then and I was glad today was better.

Dr John had deliberated long and hard about to wear a newly purchased pair of bib shorts. The bib short can take some getting used to. I myself can only say that I thought I looked pretty good in them much to the horror of Mrs Orange and the Orangettes. For a bit of a lark I paraded around the house in them and threatened to go out in public wearing them - and I mean just them.

Thankfully, Dr John took my advice and decided to wear them and I suspect they were a success. Certainly in the summer months I can see myself wearing them all the time - when cycling that it! 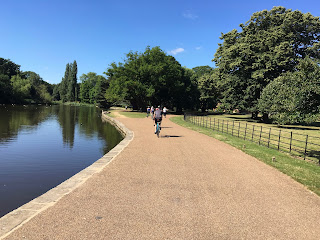 Osterley House which was started in 1762 was designed by the architect Robert Adam and was set in acres upon acres of countryside in its day. Much of the surrounding land is long gone and now housing, shops and industrial estates but what remains is still one of the largest open spaces in west London. 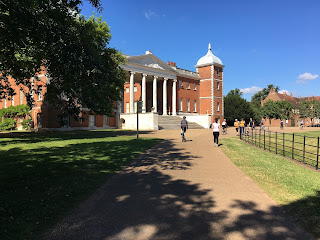 This particular ride was a big bike only ride. All participants have Brompton bicycles but as many of us are new devotees to all things big wheeled, small wheels were not appropriate on this occasion. Of course I took my Condor with me and I am starting to get to know this bike very well. 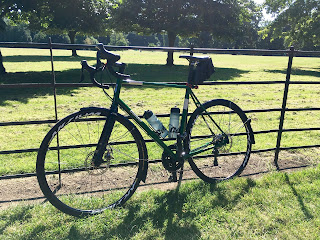 At one point we stopped to regroup and saw a sign for 'Rodney Meadow.' Of all the things you could call a meadow! It just didn't seem right.


There were quite a few cyclists  about and one rider in a family group had a small dog sitting quite happily in a rear basket. As I cycled past, if a dog could speak it might have said, 'lovely morning for it!'


We arrived at Windsor after passing through Eton - some might say the most pretentious location in the South East - in very good time. We took refuge outside 'Olivia Cafe' where good cakes, panini and coffee could be purchased.

Not having a Brompton to fold and quite literally have by my side - or knowing me under the table I sat at - I had to prop my beloved Condor up against a post. I can tell you I watched that bike light a hawk and eyed with immense suspicion anyone who I regarded coming too close to it. Luckily I didn't have to launch myself screaming like a banshee at any would be thief!

With refreshments over with we cycled up the main street with good views of the famous castle itself. We didn't get too far as a few riders needed to powder their noses.


Windsor Castle was built in the 11th Century after the Norman invasion of 1066. Since Henry I it has been used by all monarchs and holds the record for being the longest-occupied palace in Europe.

The Castle also contains St George's Chapel which is the site of burial for several royal internments. These include Henry VIII, Charles I and George III to name but a few. 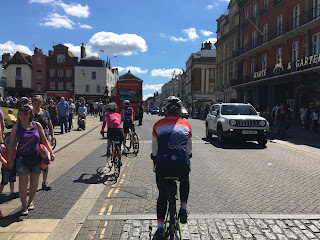 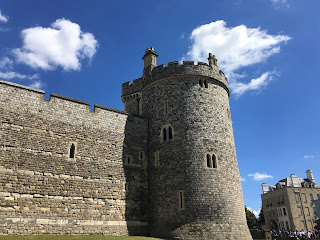 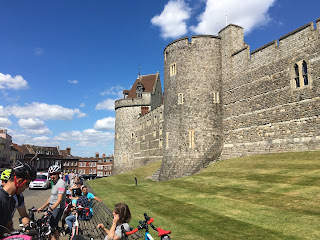 Soon we were off again and arrived at Windsor Great Park. We were informed that riders could only enter in groups of no more than six. Obligingly we went off in two groups.


Windsor Great Park does live up to its name. It is vast. covering just over 20 square miles. For centuries it was the private hunting ground of the castle and back in the mid 1200's extended over an area that was even larger than its current incarnation!

At the Long Walk we stopped to take some more photos - always an important part of any decent ride. The Long Walk is just over two and a half miles and the castle can just about be seen in the distance. 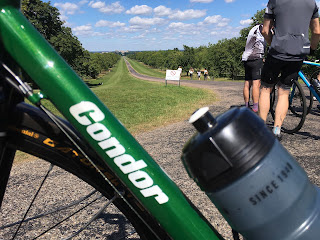 Looking in the opposite direction you can see Snow Hill, upon which a statue of King George III is depicted as a Roman Emperor. I asked David to pose for me and my only regret is not having brought my big camera! 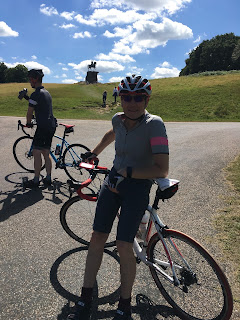 Moving on we progressed through the vast expanse of the park and encountered a few deer who seems oblivious to the the many walkers and bikers taking photos. 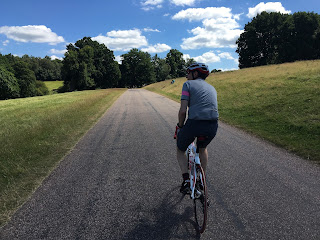 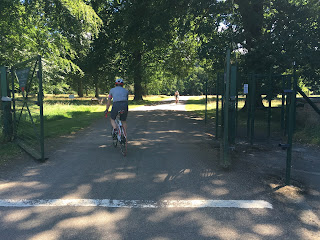 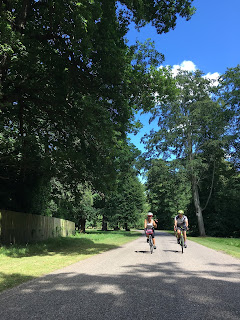 At Windsor Polo Club we stopped for another photo opportunity and it looked as if preparations were well under way for a polo match later that afternoon. Passing the many polo ponies that were lined up and getting ready, I thought to myself that in the unlikely event I were to ever need a polo pony, I would need one a great deal bigger! An English Bray came to mind. With the afternoon sun still happily shining we arrived at Bushy Park just after passing Hampton Court Palace. Soon thereafter Richmond arrived and not long after that Kew Gardens. Saying our goodbyes we headed our separate ways, happy in the knowledge that we had cycled just over 50 miles.

It is perhaps be no surprise to you when I say that I am really enjoying my Condor road bike. After completing 50 miles I knew that I could have started all over again and done another 50. I have signed up for the St Crispin's Day 100 mile night ride later this year and even though I have done this previously quite happily on a Brompton, I suspect it will be completed on my Condor road bike this time.

Another lovely ride with great company and again many thanks to David for being the ride leader and organising the ride in the first place, especially when he did not feel 100%.