Normally the big night rides to the coast are on a Friday but the ride to Felpham (a first for me) was a Thursday. This was almost certainly done to capitalise on the Bank Holiday in the UK for Good Friday.

I met Geoff, veteran of many a ride at Charring Cross and we made our way to Victoria which is closer to the start point of the Friday rides (although this one being a Thursday). Sadly, Mark (King of the Hill) was unable to make this ride as he has taken a nasty tumble and hurt his leg. Hopefully he will be back to form soon after some recuperation.

At Victoria we met up with David, Anne and Bob and gradually other riders joined those already there to form a sizeable group. The weather had been good all week and with reports of dry conditions for the entire ride I decided to bring my Titanium Orange Brompton out to play for the first time in 2014 (I think).

We set off on the short journey to Hyde Park corner and by the time we arrive there were many more cyclists. After the now familiar and enjoyable safety talk (joining in is very much part of this) we gave our bicycles the once over, turned on GPS devices and lights.


With a slight chill coming over me I decided to put on one extra thin layer and doing so gave me the psycholigcal boost that I was indeed warm enough. With shout of gentle encouragement we were off into the night. It was going to be the longest ride of the year so far for me and I was excited at going to a new location but equally excited that I was going on another night ride to the coast - they are quite simply brilliant.


I think about 90 riders had signed up for the ride. Not sure all made it but it was a sizeable group and the tail end Charlie's and way makers did an excellent job at keeping everyone safe. Bob, was acting as one of the tail end Charlie and for the entire night I rarely saw him. A shame as I always enjoy his insight to all things Brompton. Not long after we set off I heard the very familiar voice of Ian M who wasn't on his Brompton but on an extremely good looking Bianchi bicycle.

Bang on midnight we were off under the watchful gaze of a statue of the Duke of Wellington. I wonder what he would make of it all?

One of the features of a ride with so many participants is that occasionally you have to wait and regroup. This could be waiting for riders who have been caught at traffic lights or suffered a puncture or other mechanical issue. At these times I took the odd swig of water and munched on various goodies smuggled in to my Orange Mini O bag. In some regards it is like a midnight feast and as enjoyable.


As I mentioned the safety talk encourages participants to vocally make other riders aware of any nasty hidden dangers but shouting them out so others can avoid them. Shouts of: hole; bump; bollards and what have you are frequently heard. When I have done my bit by shouting, 'hole...HOLE!' it actually makes me chuckle a little as in my mind I sound like the late Sir Norman Wisdom shouting it out.  One of our number embraced this with enthusiasm. From several hundred metres behind me I heard shouts of 'HOLE!!!"

As we got further and further away from the urban sprawl we started to cycle through more rural areas. There are of course no photos of this as these areas don't even have street lights. As we cycled along to my right I was startled by owls twit  twooing and foxes wailing like banshees being assaulted. In addition to this there frogs croaking and shouts of 'HOLE!!!' and the like from a hundred metres behind.

At just over 33 miles we reached 'The Cabin' in Faygate. This was a small roadside cafe that offered tea, doorstop sandwiches and bread and butter pudding. At 04:30 sharp we headed off again. As always, no sooner had this became a reality I was like Captain Lawrence Oates setting off into the tundra. I put on an extra layer but it made little difference until I was cycling a few miles and warmed up a little.

After our stop at 'The Cabin' dawn was approaching. Chiffchaff after chiffchaff could be heard competing with wrens, blackbirds, robins and Dunnocks. It was lovely listening to them and another feature of these sorts of rides.


The great thing about these rides to the coast is that they really celebrate cycling in all its forms. Road bikes, hybrids, Bromptons, mountain and a recumbent all participate. It is a mix of people from all sorts of backgrounds and it is great to have a chat with them. 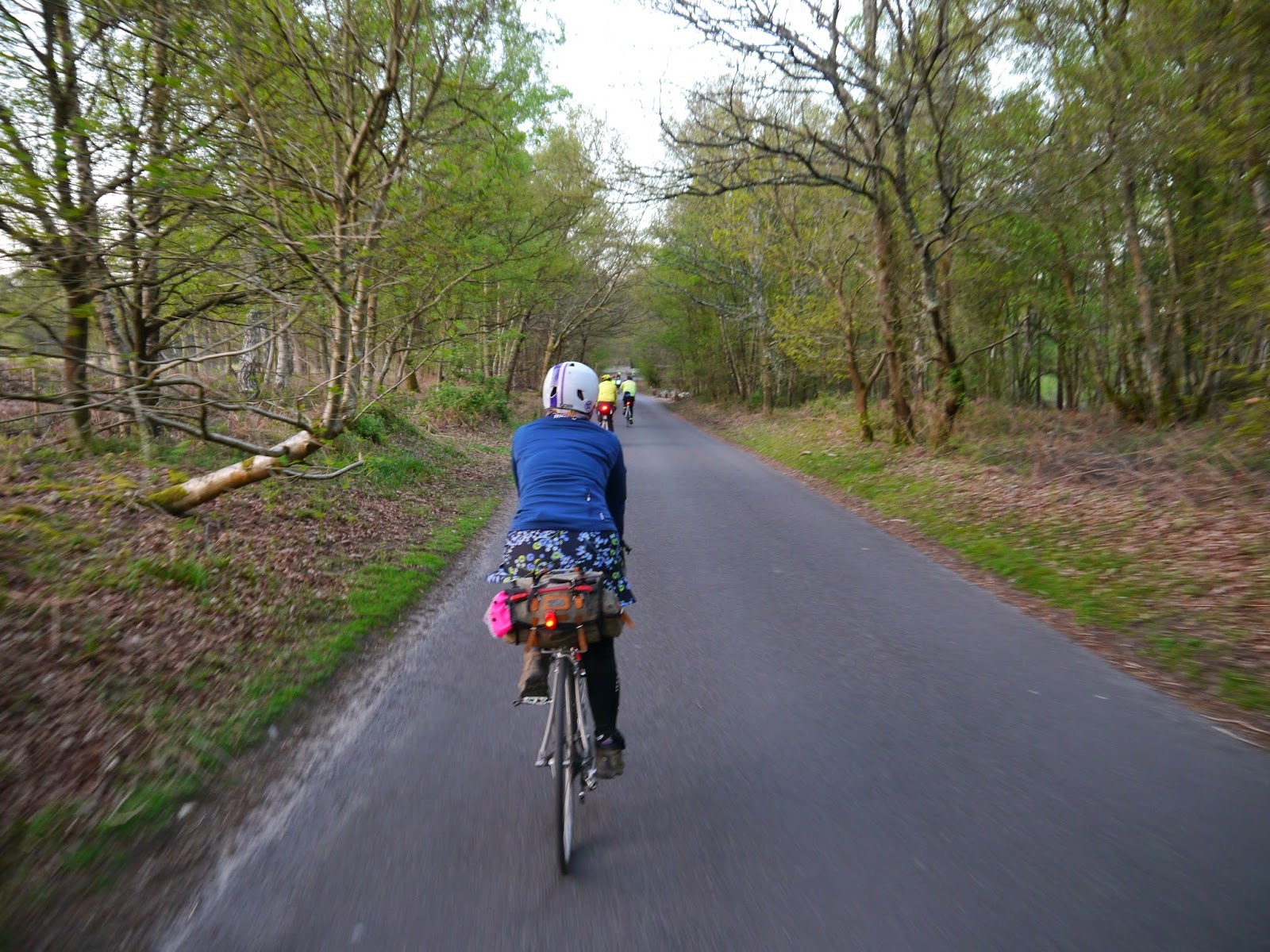 With a few step inclines the riders started to spread out and there were periods of several miles where I was cycling along more or less on my own with just my thoughts for company and he views to take in which I have to say were stunning.

One interesting part of the ride which I think saved us from ascending a horrendous hill took us on something that would have brought moist eyes to even the most militant member of the Ramblers Association.

We went off road totally and marched with our bicycles in single file along a narrow track. Imagines of 'The Hobbit' came to mind.

At certain points - and there were quite a lot of these certain points - we had to carry or hand our bicycles over a gate. It was all good fun and the way finders had a new and different role to perform in assisting people with their bikes.

After negotiating several of these gates we entered an open field. The views were marvellous and I could not resist taking a few photos. Ahead, further up the line there was talk of being careful of bulls in the field. I have to say that this concerned me!

In the distance there were indeed several cows but their sex could not be determined. As others were wheeling their bikes quite nonchalantly I did the same. I gave the air of a person who had lived in the countryside all their life (bulls can sense fear or is that dogs)?

I can honestly say that I am an urban creature and take the view that if something is bigger than me, I'd better stay clear. I can also say that if ones of those cows or bulls had of charged in my general direction I would have surely showed myself up. (Those from the UK of a certain age might be able to picture how I feel I may have reacted if this had of happened). I fear that I would have run quite swiftly in the opposite direction in a not that dissimilar way to the 80's variety entertainer Duncan Norvell when he said, 'chase me.'

Bob acted in a quite disgraceful way towards the assembled cows, who it has to be said were looking him in the eye. He angled his Brompton seat post towards them showing them his saddle and suggested that they might one day become 'Brooks' saddles. I mean, really!

The fun didn't end there as we had to negotiated fallen trees and a bridge that was out of Indiana Jones. For some reason my youngest daughter has the impression that I wheeled my Brompton over a rope bridge, suspended over an horrendous river gorge. I couldn't possibly comment how she might have got that idea from my description. 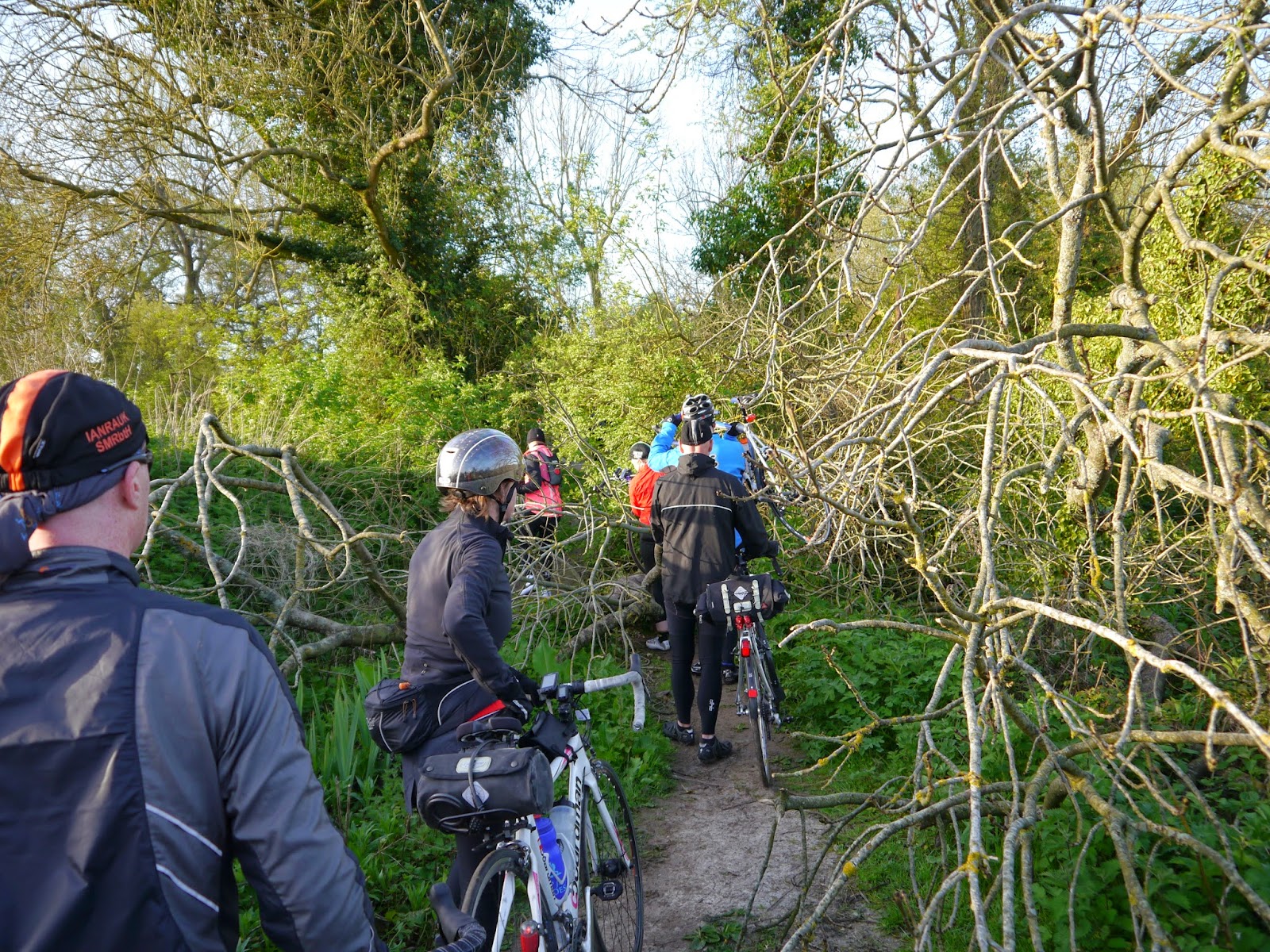 A footbridge over the River Arun was the last of this excellent mini- adventure before we returned to the open road again. Just before hitting the road the cameras were out again taking arty shots of sunrise.

I have only been to Arundel once and that was to one of the Wetlands Centres. It is a lovely part of the country and seeing the castle in the distance and the lovely looking narrow streets made me think I must return.


Bob, had done a stirling job as a tale end Charlie but with a few miles before we reached the breakfast stop at, 'The Lobster Pot' I saw him pass me at tremendous speed. I considered trying to keep up but tried to maintain the nice 18mph rhythm I had been maintaining on a lovely stretch of open road.

My first thoughts were why? My second thoughts were that Bob would indeed be formidable opposition at the Brompton World Championships and that I'd have to up my game. My final thought was that perhaps Bob was testing some sort of top secret electric motor cunningly disguised?! The real reason...he wanted to be first in line for breakfast!

'The Lobster Pot' was great and my 'big breakfast' was just the ticket. After saying our goodbyes Geoff and I headed to Bognor Regis railway station to catch the train back to London.

This was my longest ride of the year so far. As I type this apart from feeling as if I could do with an early night, I feel fine. I would even say that I could have gone further - which is a good thing as the big 100 miler is looming. Looking at the ride data I am rather chuffed that my average moving speed was 12.2 mph over this distance. This ride was by no means flat and there was the adventure where we walked with our bikes. Again my Brompton and the other Bromptonians showed that our beloved small wheeled marvels are much more than just a commuter hack for short distances.

I really enjoyed this ride. It was a brilliant route and again Simon (the leader) guided us safely with his team of tail end Charlies. Many thanks to them. I have now been on several night rides to the coast and this ranks as one of my favourites. Lots of elements conspired to make this a wonderful adventure: distance, a few hills, friendly banter, the prospect of food, some stunning scenery. and completed on a Brompton! I have said before that these rides are addictive and this one certainly makes me want more!