The weekend was going to be a rather busy affair but Saturday kicked off with a version of a ride I had done before - train to Brighton, good cycle around and train back to London. As I wheeled my Original Orange Brompton out of my front door I looked forward to the day ahead.

I met my Cycling Partner Andrew at Victoria, boarded the train and before long we had reached Brighton. I decided to travel their early for purely selfish reasons. I don't really enjoy public transport of any description - one of the reasons I bought a Brompton - mild claustrophobia perhaps - so getting the earlier train down seemed like a good idea. I am just glad that my Cycling Partner provided some welcome company.

Once at Brighton we sauntered down the road to a coffee shop where we had some suitable fortification for the day ahead. This done we headed back to the station to see a growing ensemble of Brompton bikes and riders. Many were old hands and a few were new - always great to see new faces.

Our ride leader was David and after going through a quick briefing we were off. Even for a town like Brighton which really must have seen it all, the sight of several colourful Brompton bikes with equally colourful characters created a buzz.

As we rode along the winding streets of Brighton it struck me how many independent retailers there were. In London there are perhaps too many of the big multinational corporation types and it was refreshing to see something original and different.

Of course there were plenty of photo stops. This really does almost go hand in hand in owning a Brompton.

Our ride took us to our first destination Shoreham Airport. The last time we were here this wasn't our first destination and it served to make thing fresh. The airport, founded in 1910 is the oldest in the UK. It was used during the First and Second World Wars and until 1981 the landing area was entirely grass!

The atet deco building although needing some restoration is lovely and I hope that its Grade II listing means that it can be renovated to bring some life back to those wondrous curves. 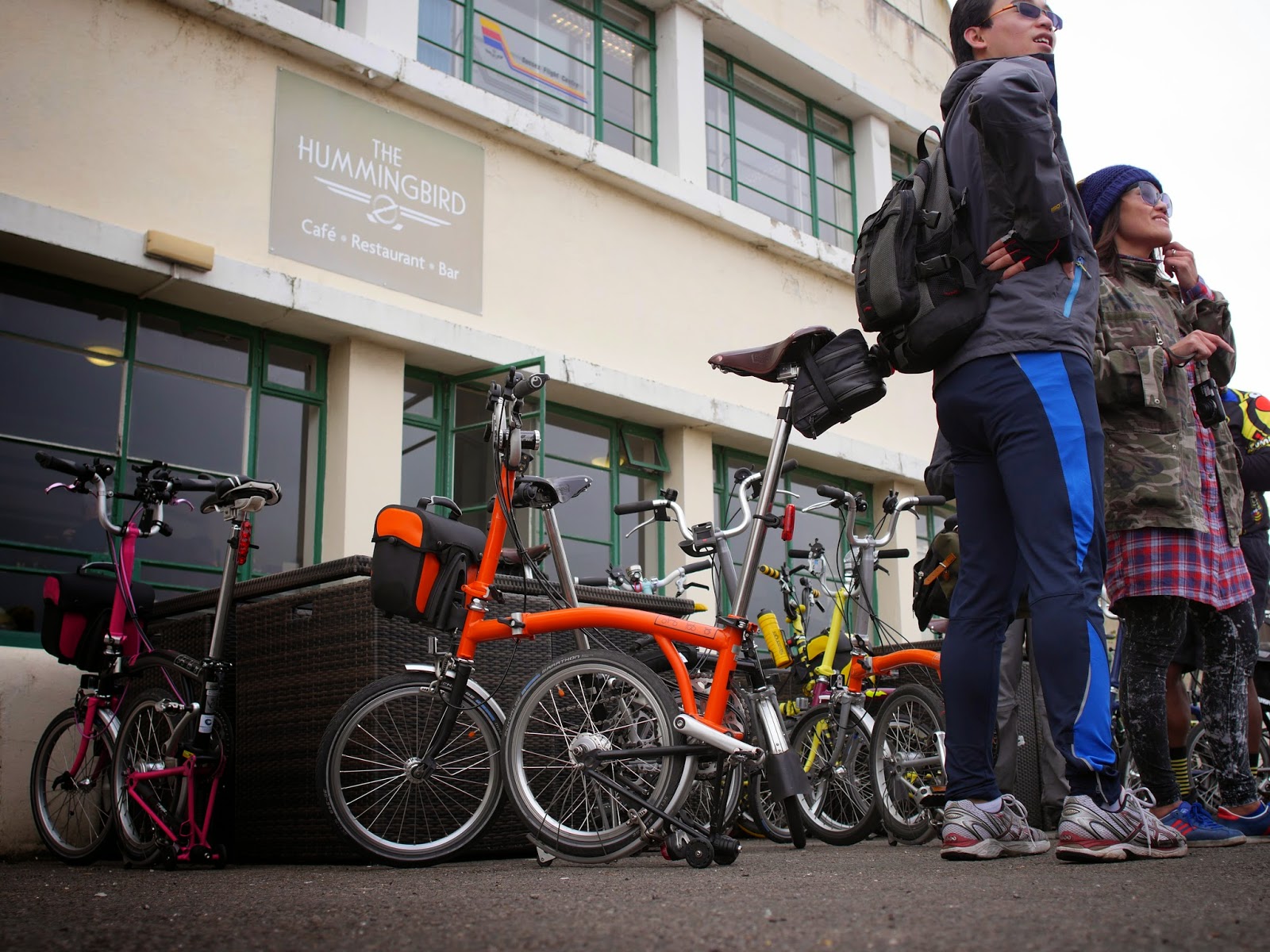 Many of our number decided to partake in a slice of cake but I simply enjoyed the views of planes taking off, helicopters landing and looking out at the views. 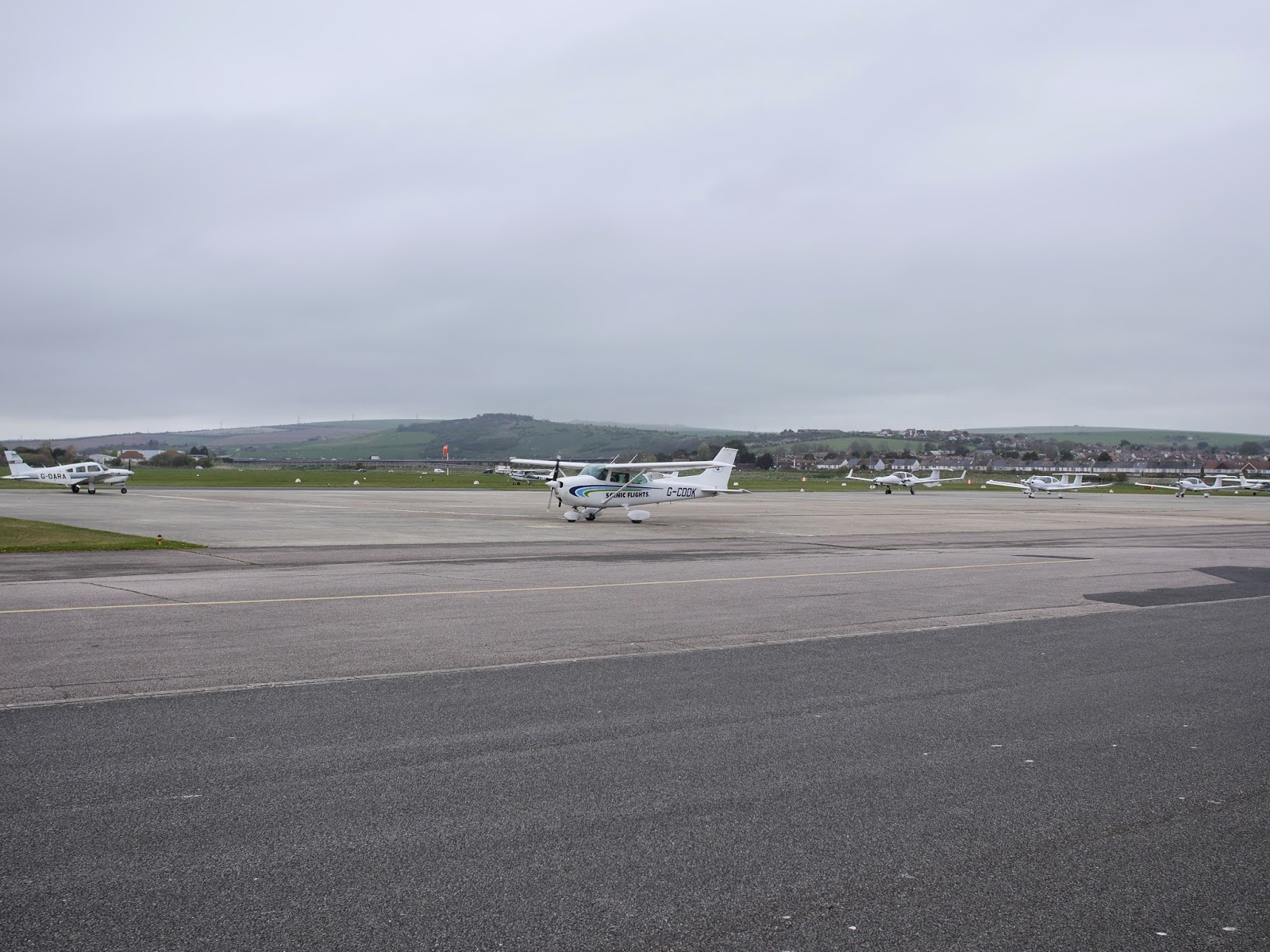 Saying goodbye to Shoreham we cycled back towards Brighton. We kept a decent pace and our Brompton peloton brightened up the grey clouds that were threatening. 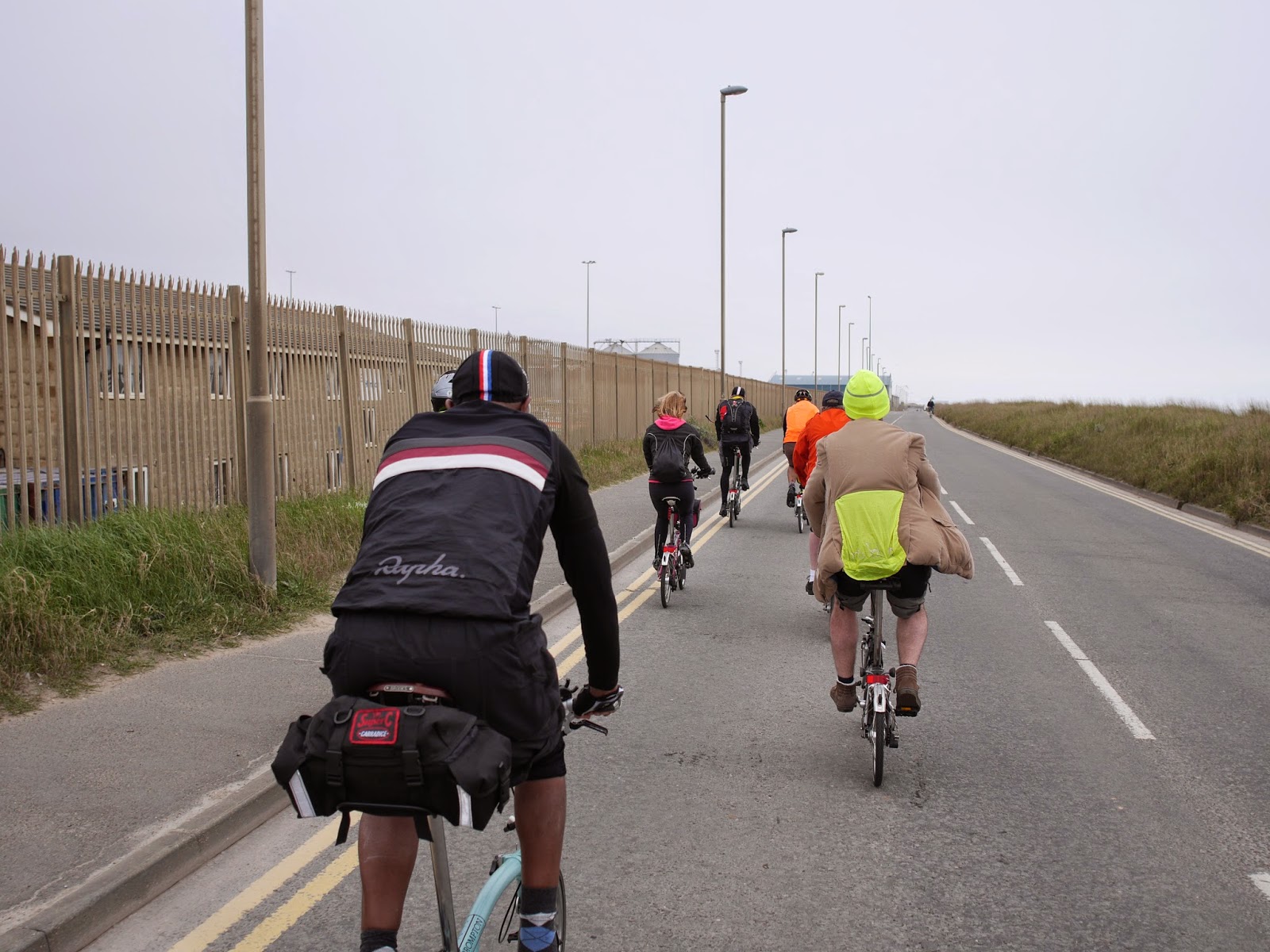 At the beach huts many sought out the colour of their Brompton to take a suitable photograph. Only the Brompton user would do this surely? I cannot see the owner of a Specialized doing this for example.


Upon reaching the Royal Pavilion, Anne braved the traffic to take a picture of us from the middle of a very busy road. 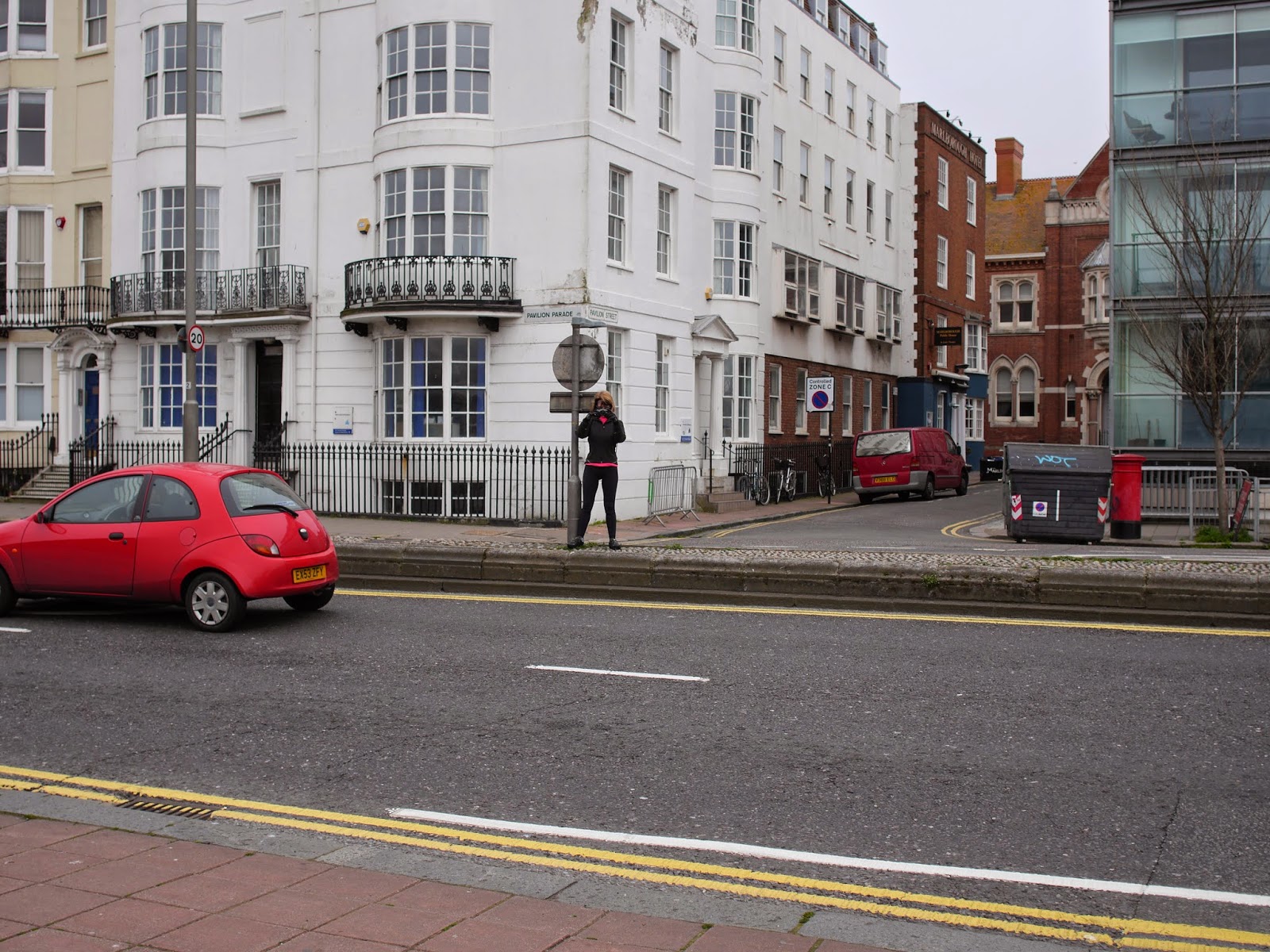 I have been to the Pavilion a number of times and like it a great deal. It was a retreat for George IV who was quite a flamboyant type. (Incidentally I passed a statue of him in Trafalgar Square on my way to Victoria station). If he were around to see a Brompton I'd wager that he would have loved them. I wonder what colour he would have chosen??

If you are ever in Brighton the Pavilion is well worth a visit. It is one of those buildings where the inside more than lives up to its exterior!! 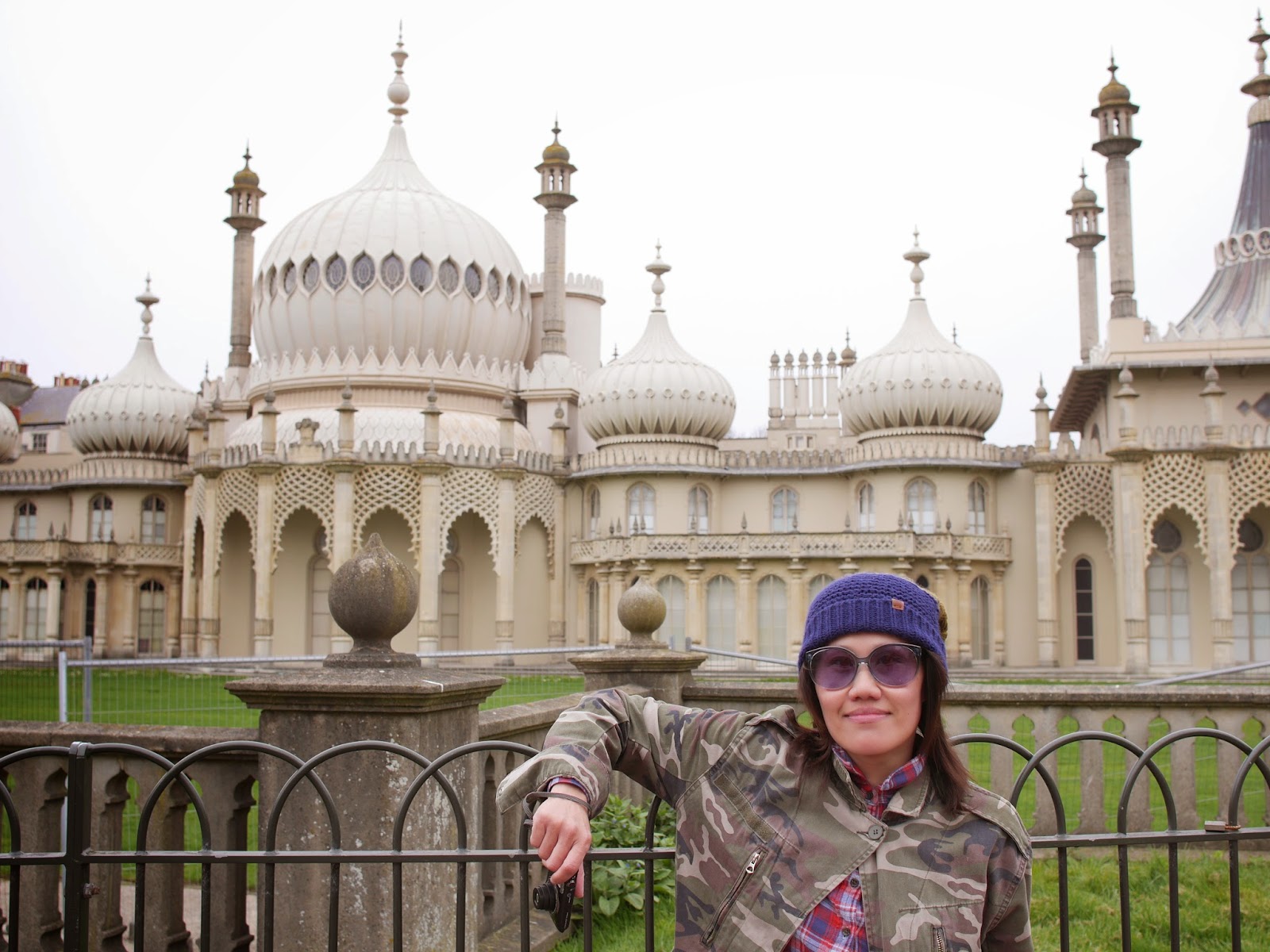 Our next stop was the Velo Cafe Brighton. It was extremely busy which is always a good sign. The menu looked rather good and I ordered a pulled pork sandwich. I have to say it was pretty fine! The staff were very friendly and the food arrived quickly. I will definitely be taking Mrs Orange and my two Orangettes there during the Easter holiday. If you are in Brighton, well worth a visit.

Passing east of the marina with lots of little boats the waterfront dwellings reminded me a little of those by the Thames. As we cycled along the Undercliff, a 4.5km walkway along the bottom of the chalk cliffs that run to Saldean I saw a Brompton parked up along the sea wall. Our little bicycles really do get everywhere. 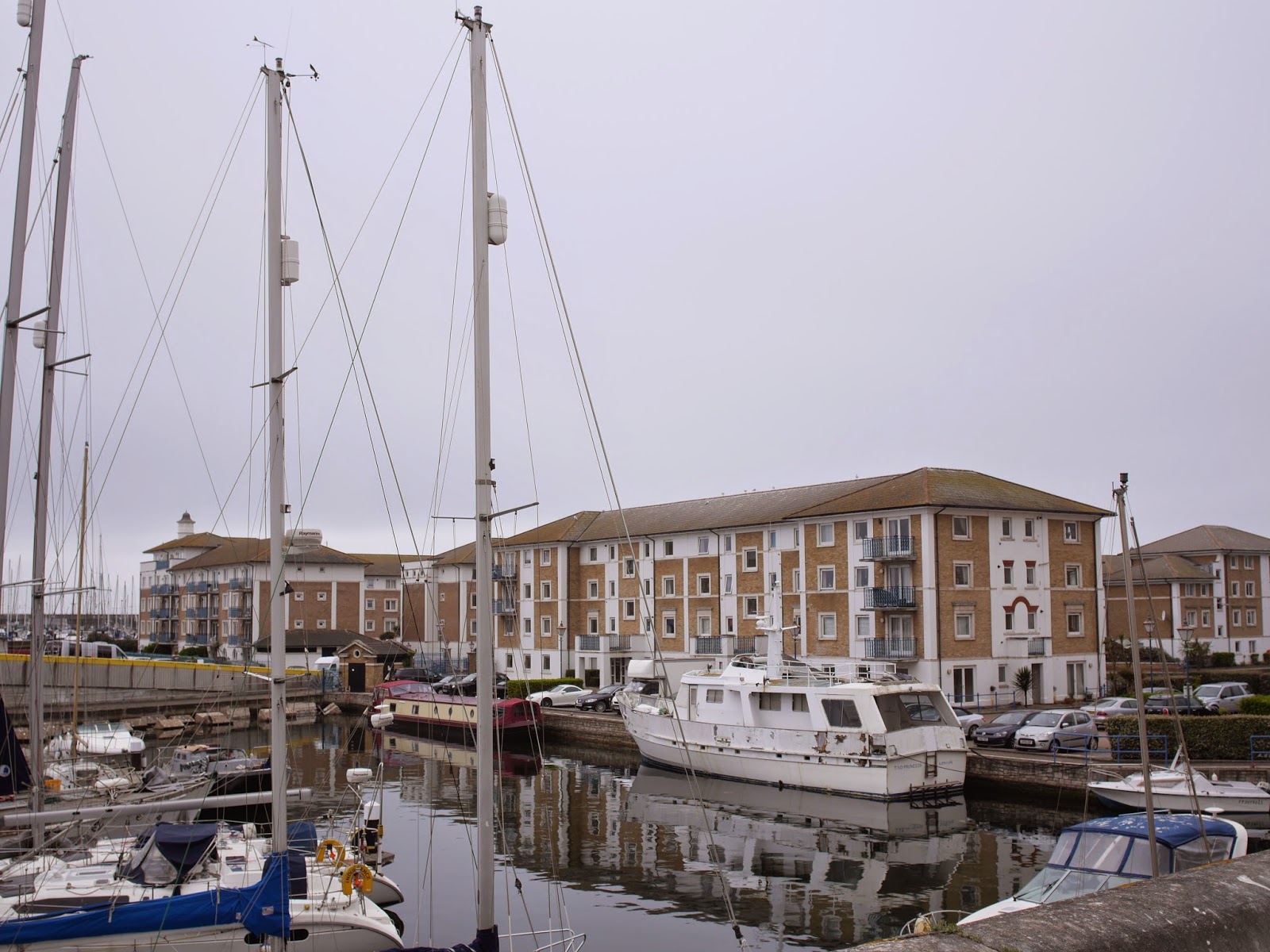 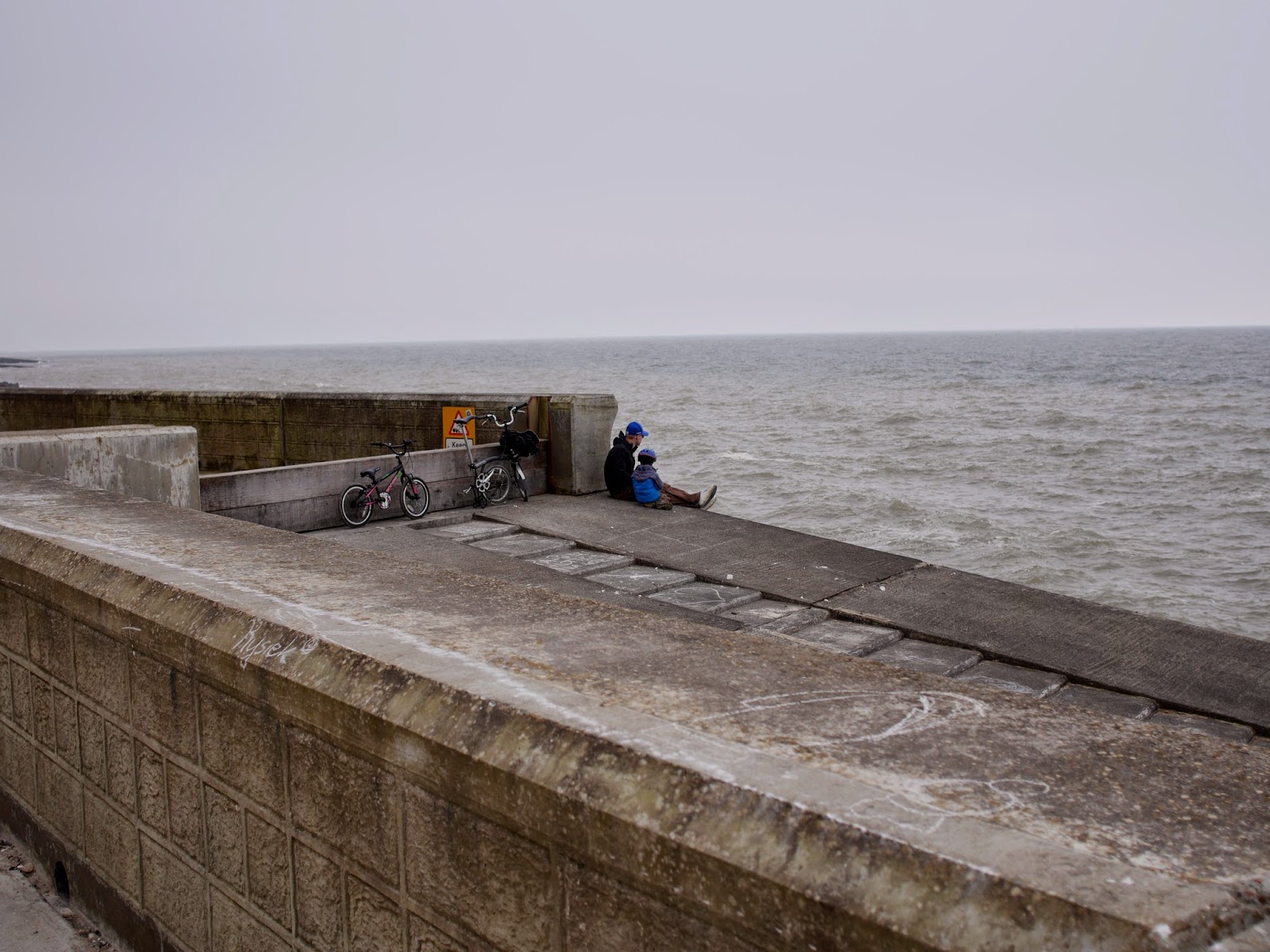 With the tide gradually coming in the waves started to splash up and lots of us tried to take photos, videos or just stare out at the waves with its near hypnotic quality. The weather was turning ever so slightly but it was still warm and nowhere as windy as the last time we ventured this way.

The chalk cliffs were formed millions of years ago and goodness only knows what forms of life once roamed where we were cycling. Lots chalk in various shapes and sizes regularly falls from the higher parts of the cliff. In my youth I could imagine me hammering away at it with anything to hand to see if I could find a fossil of any description. On this day I simply settled for a few pictures. 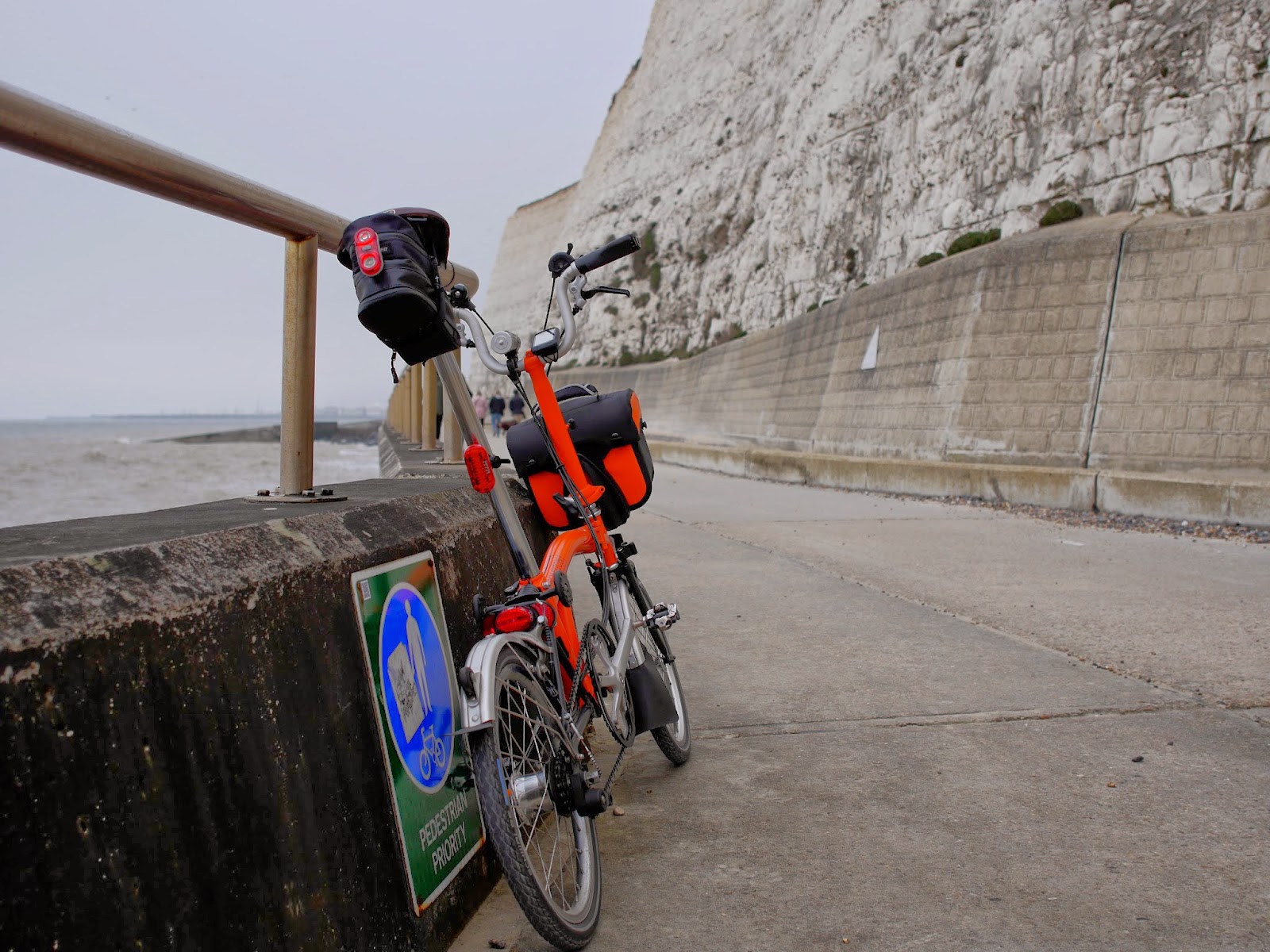 At one point along the walk there is a large open space with great views of the sea. For no particular reason when I arrived after taking arty shots of sea, I discovered my fellow Bromptonians riding around in circles. There was no reason for doing this other than it was fun! This it the essence of owning a Brompton - they are just fun and make you happy. 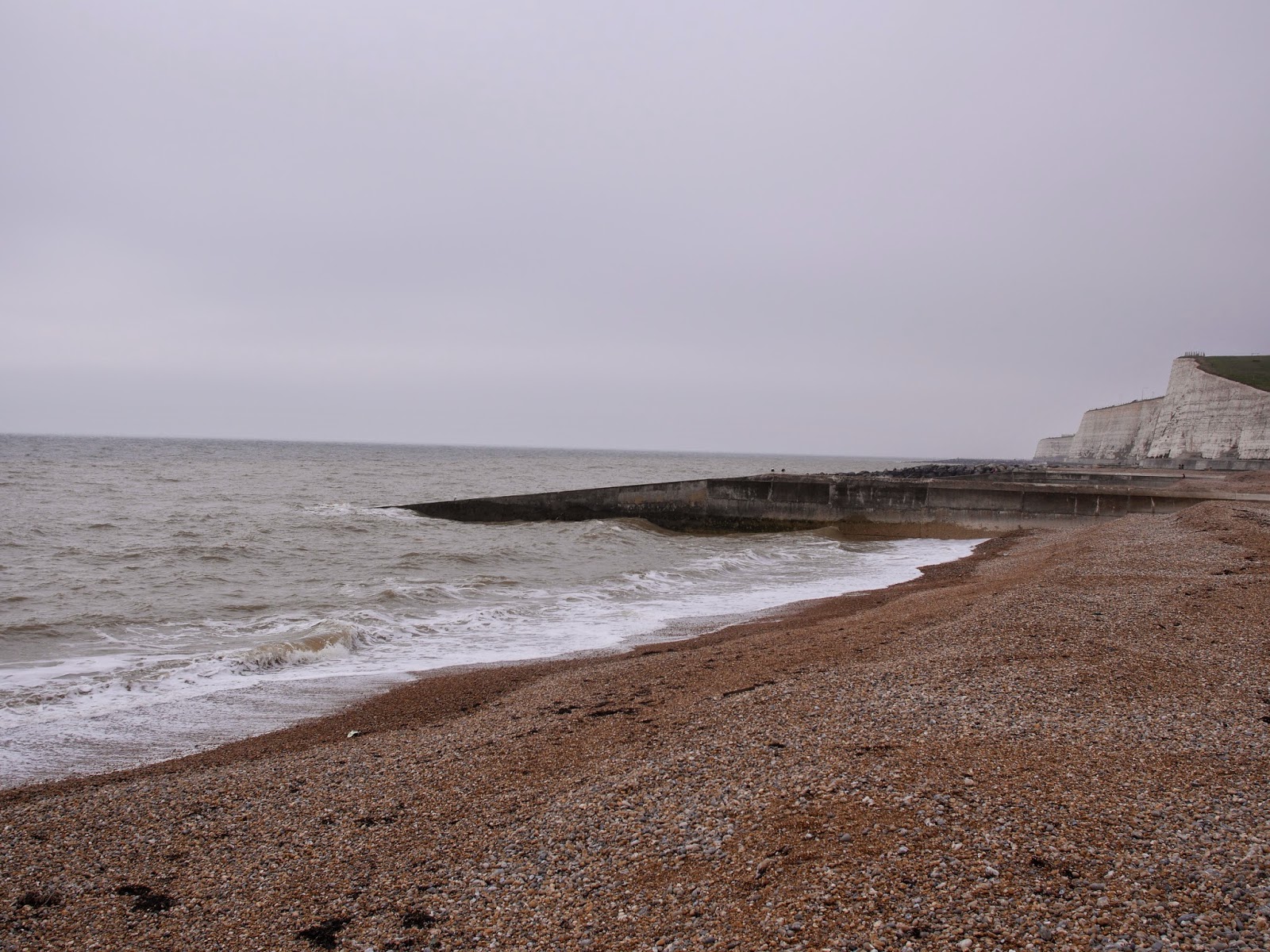 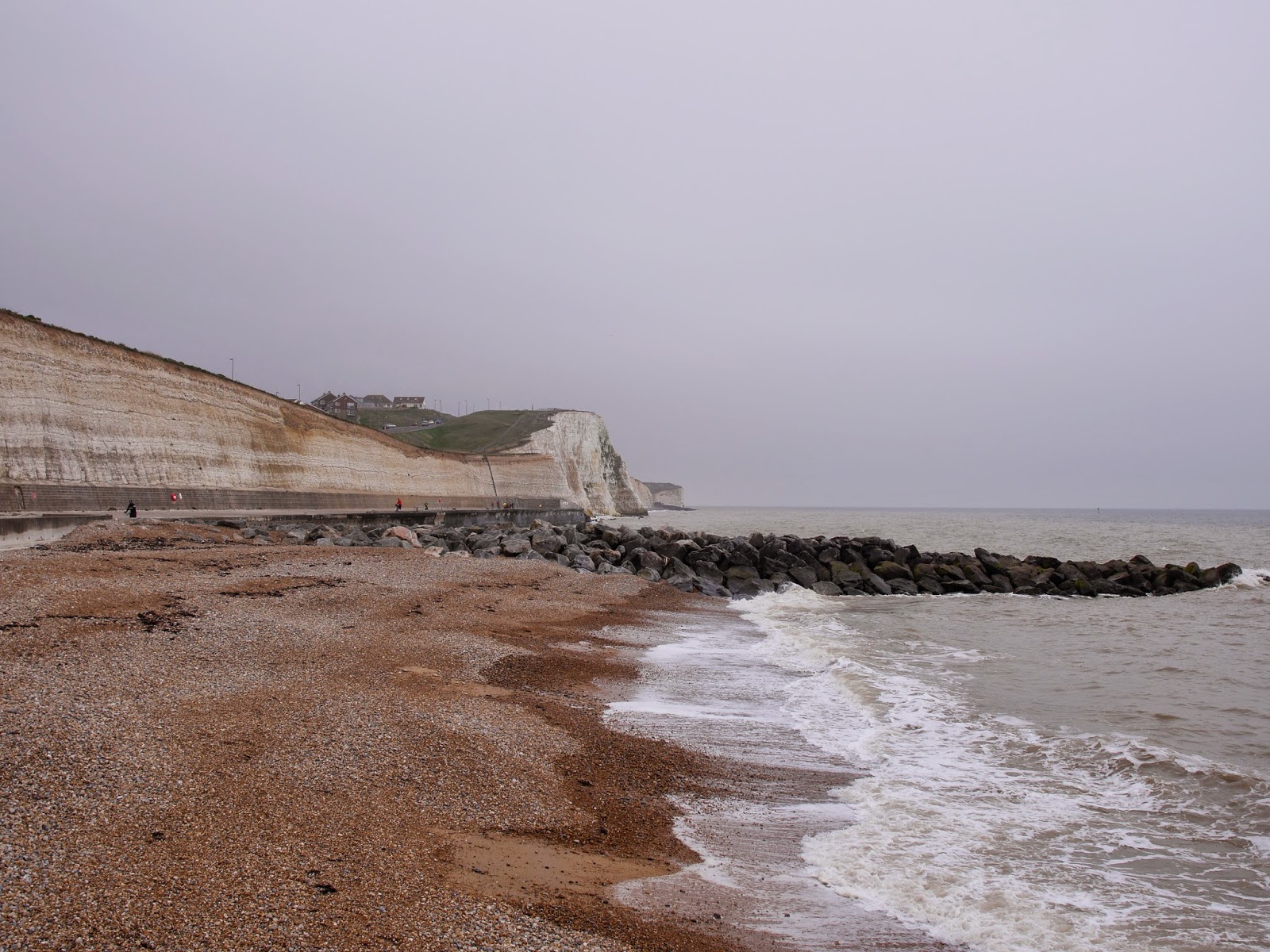 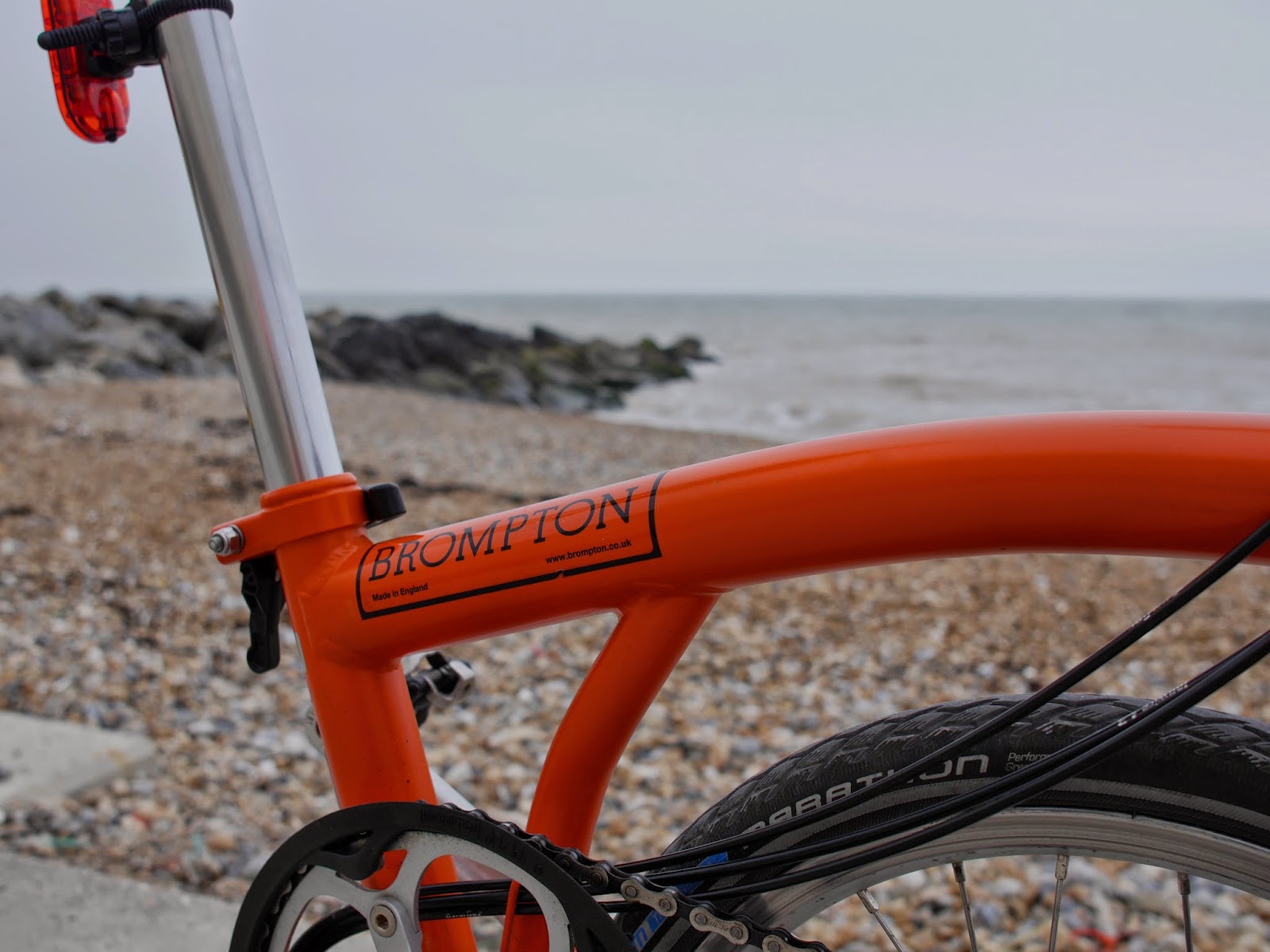 Heading back again towards Brighton we headed up a few hills but nothing we or our Brompton bicycles couldn't manage. 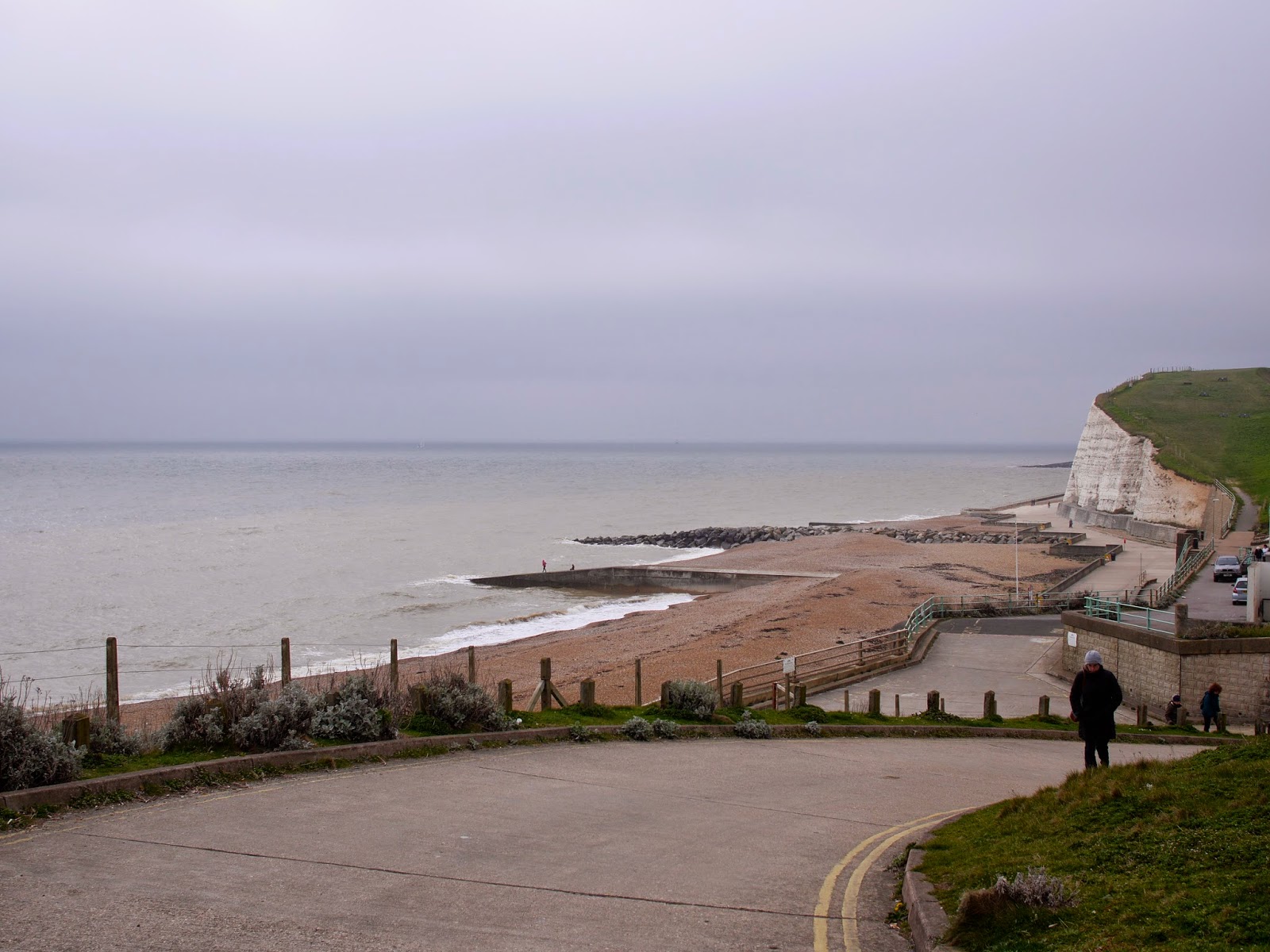 With one last look towards the sea we headed back to the train station where we said our goodbyes. Andrew, David, Anne and I had tickets booked for a later train so headed to the same coffee shop we started out at all those hours ago - a fitting end. 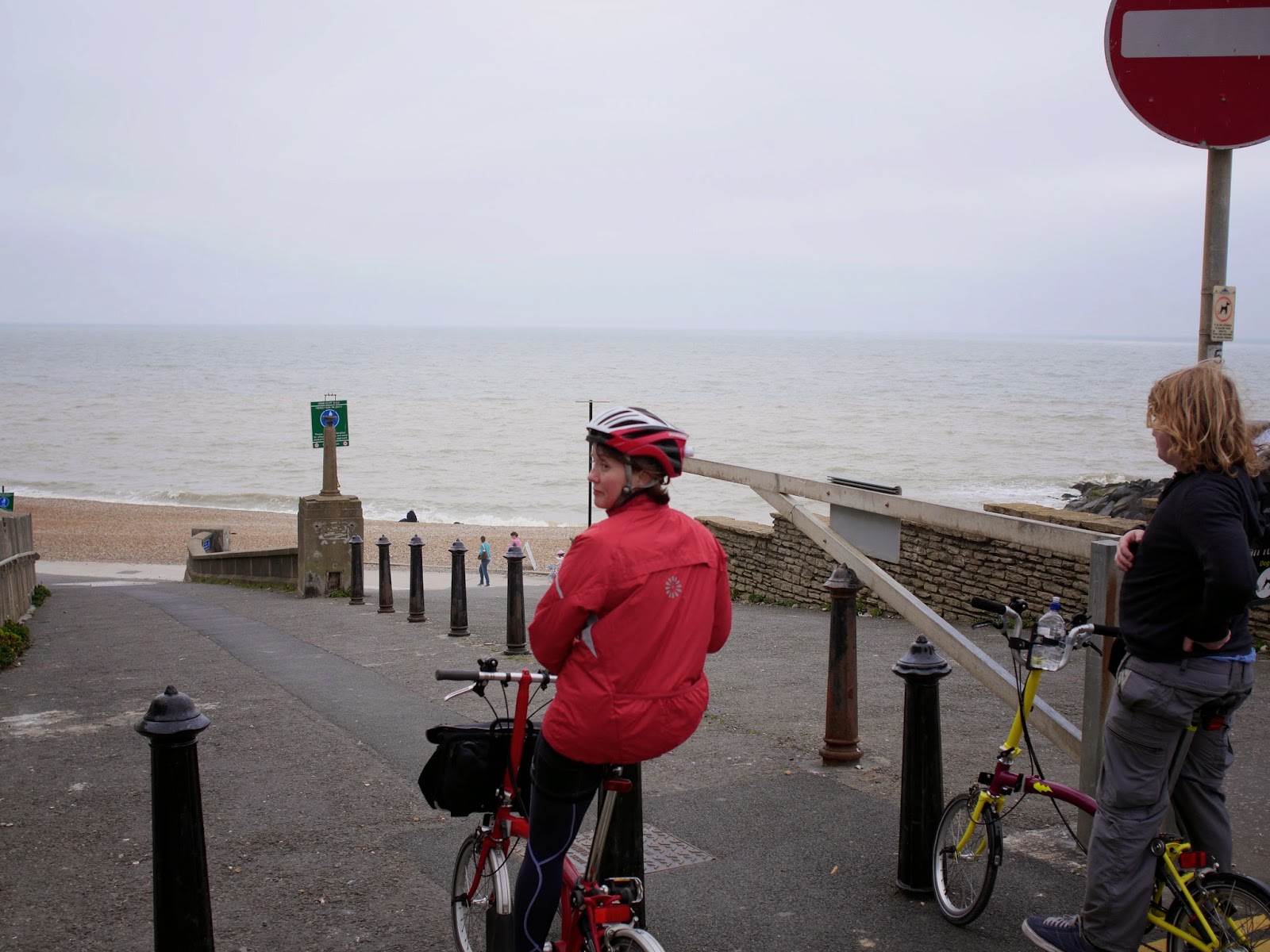 I like Brighton and this was a lovely day out. It was lovely to see lots of familiar faces and great to see some new ones too. A very big thanks to David who yet again was the ride leader and navigator. Can't say we'll be doing this ride again this year but it is definitely one I am sure we'll come back to.