Well the day finally arrived. This afternoon I collected the 2 Speed Brompton from a cycle shop in London. Here are my impressions.

The bike colours are a fetching purple and apple green. Not really to my taste but that isn't what is important.  After cycling a few miles it was quite obvious to me that I really did like the simplicity of just having two gears. I did managed to go up several small hills and one that was quite steep. The start off gear was pretty good at assending and I didn't seem to need anything else. Quite impressed.
The bike I hired had a great big front hub light. Totally pointless as far as I am concerned as it adds a great deal of weight to the bike. I suppose the hire shop needs to cater for people who might need the lights. The weight saving despite this, is noticable and I would imagine that without the light hub it would be quite telling. Certainly comparing my beloved orange Brompton which is a 6 speed to this, I really did notice the weight saving. This is something I didn't think would be as noticeable to me.

I cycled down Oxford street, the Edware Road and eventually ended up on the Harrow Road. As I knew I was not too far from Kensal Green Cemetery I decided to pay it another visit. I am going to Whitby in a few days time for the Goth week. I am not a Goth but I have occasionally worn black and like those old RKO and Hammer House of Horror films so this location gets me in the mood for Whitby. 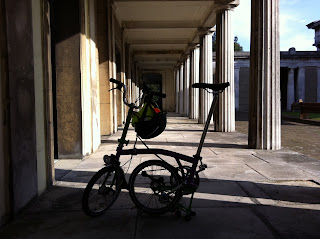 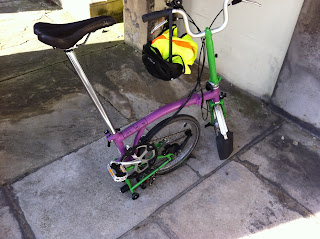 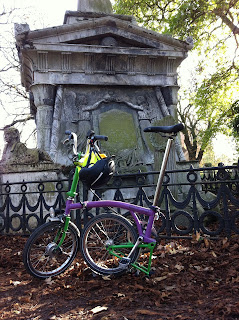 I am taking the bike back tomorrow but I already know what I think of the 2 speed. I love it. It is just so efficient and simple. The weight saving is considerable and it just seems like a great option for City riding.

When I cast my mine back to the Brompton World Championships I am coming to the conclusion that the 6 gears on my orange Brompton were actually a hinderance. I was up and down the gears and not ever seeming to find the gear I wanted. Going up a sustained incline bordered on the ridiculous as I desperately tried to find traction. After riding this 2 speed today I am convinced that I would have had a more successful and less stressful ride. I could of course be wrong and those of you our there reading this might very well have an opinion you'd be gracious enough to comment on.
What I am still not so sure about is an S Type. The being over 6 feet tall and riding comfort thing, does bother me. Added to this if I did get an S Type, my C Type bag wouldn't fit. This would mean another added expense. In addition as I need an extended seat pillar, my ride is fairly sporty on my beloved orange Brompton anyway. There is also a part of me that likes the tradition of an M Type. This combined with raw lacquer and the brown Brooks saddle I took off my orange Brompton in favour of the black one, would certainly create the look I'm after. So...I really am not sure?