Well it finally came.  I cannot begin to explain how excited I was getting up and heading off to my very first BWC.

I dragged my wife and two young children out of bed (they didn't really want to come) and we headed off to Oxford. There was a mild disaster in that before departing I attempted to pump my tyres up with my foot pump. Much to my dismay the nozzle end wasn't working and all I ended up doing was defaulting the rear tyre! Despite this we headed off in the knowledge that someone at the other end must have a pump I could borrow or I could use the one that is attached to my Brompton (for the first time).

We arrived in good time. I was a small child, too keen, too eager. I went to registration and got the number to place on my bike with the time chip attached. I then put my bike on the grid and the long wait began.


The nearer things go to the start the more the anticipation built. At 11:40ish we assembled for the instructions and safety procedures.  That done it was time to get ready to go into the pens - the waiting area in which one would wait for the off, run to your bike and go.

Once in the pens I detected a nervous tension among many standing near me. A few people from the Brompton staff lightened the atmosphere my starting a Mexican wave. That done things became quiet. A silence descended over the pens like a sea fog creeping quickly out of nowhere. I felt nervous and could hear my heart beating. The first wave went off. The second wave. It was now my turn. The two minutes between each wave seemed like an age. The air horn sounded and we were off.

Many ran as quickly to their bikes as possible. I have always been taught that a gentleman does not run, so I walked to my bike, assembled it and was off. I raced through and overtook quite a few riders. As I approached the first steep climb I tempered this initial haste as there was such a long way to go.

I do not know whether what happened to me can be what runners describe as, 'the wall' but believe me I hit something. I almost ground to a halt as I desperately searched for a gear to keep me going. I couldn't find it. My legs did not have the power to turn the peddles and I had a stitch (something I haven't had since I was 11). As I searched for a gear that would help I must have somehow kicked off my own chain as it was off and I had to stop to put it back on.  This was a kind omen as I say with all honesty, I would have had to stop and push if it hadn't.  I suspect that I should have gone through some sort of warm up beforehand and not regarded having a cup of tea as being sufficient! Chain back on as I reached the summit I mounted my bike and headed off.

This event, race and day was a celebration of owning something quite unique. What other manufactuer put on an event like this? What other sport would allow a 40 year old, father of two to compete in its World Championships? My time for this race was just over 35 minutes, quite shocking but does it really matter? Upon receiving the Brompton medal I was tired but elated. Something I had looked forward to, for so long exceeded my expectations. I loved the Brompton World Championships 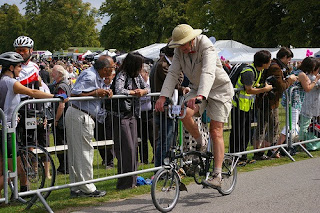 The great thing about having a time, is it is there to be beaten. BWC 2012 is only a year away. I can put in proper training, go on a diet and perform some sort of warm up. I even bought a pair of racing slick tyres to give me that extra edge for next time. I can't wait. After all, I am now a world class international cyclist and if you buy a Brompton, next year so could you!