Dream of a Brompton night ride to the coast...

I don't know about you but when I get a new phone or laptop - the latter isn't that often as my MacBooks seem to last ages - I usually search out a photo to use as a screensaver. With my new and I have to say quite wonderful MacBook arriving last week, I went through this very process.

The photo I found was from a night ride to the coast. I know that it was taken on the way to Whitstable. This particular location has some quite magical qualities about it and has often been named the Queen of rides. I wouldn't disagree. What is is doubt is the time. I think that it was taken at almost 05:00 am.

The photo was snapped on an iPhone that I had back then, while cycling along behind the riders you can see. The sun had just risen and there was a haze all around us, that not 10 minutes later was all gone. Despite being in June I remember it being somewhat chilly, perhaps as we had not long left the warmth and sanctuary of the halfway stop.

For a few miles before and after this photo was taken, no-one said a word. The only sounds were those made by the many birds singing happily away and the sound the various bicycles made as they pedalled towards the finish and the prize of a cooked breakfast. This photo has always been one of my favourites and was a lucky capture.

I got this photo onto my MaBook just before I retired to bed after along day. In my sleep I replayed this ride. My favourite part was reaching the point in the ride where participants reach the last left turn and are allowed to cycle as fast as they wish to the seafront. This was all so vivid that upon reaching the end of the ride - in my dream - I woke up.

As I got ready for work I wowed to myself that along with a nocturnal Brighton adventure, the run to Whitstable will also feature in my bucket list of rides I want to do as soon as lockdown ends and we are permitted to do such journeys. 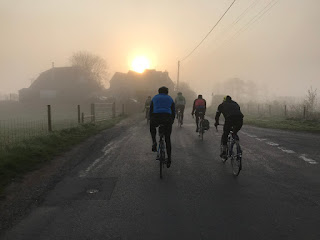