Look who I bumped into? + Short video

There was a time not that long ago when my Partner in Crime, Andrew and I would be attendees at all manner of Brompton rides. Wherever there was one, the other would not bee too far behind. I suppose life gets in the way of such things and both of us, but to a greater extend Andrew, have not been out on adventures as often as in the past. It was therefore a happy Mr Orange who was venturing out into a grey and dull morning.

The meeting point was the London Eye at 09:00 and when I go there it felt cold and a little drizzle was falling from grey clouds. 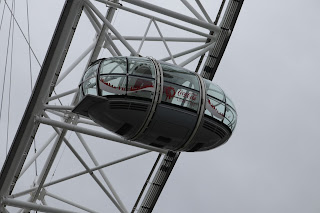 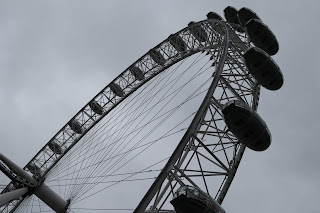 My riding partner arrived and before we knew it we were cycling east as we had done many times before.

We chewed the fat as we cycled along and it was good to be riding again with my cycling buddy. In fact the last time we saw each other was the day of the Brompton World Championships - that neither of us got in to. In other words, it has been far too long.

At the fountains with views looking out to Tower Bridge we rewound time a little and putting our Brompton bicycles in familiar poses. 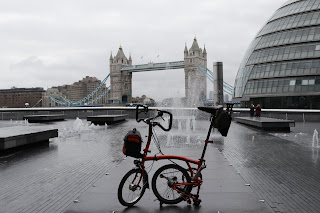 As well as a few photos I managed to capture a small amount of video and I have spliced together a few clips and put them in a short video clip, the link for which you can find at the bottom of this blog post.

Cycling further east we stuck to familiar territory and hugged the Thames for much of our journey, chewing the fat as we cycled along. 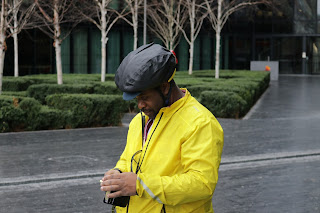 The Thames Barrier Cafe opened at 11:00 and timed to perfection we arrive four minutes before opening. Once inside we ordered our usual and it was as if the old times were back again. 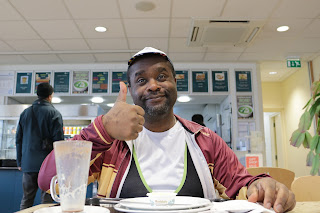 As I needed to be back home by about noon and didn't want to keep Andrew out for hours, I suggested that we take the tube from the O2. He agreed and we traveled together until parting company a few stops later.

It was great to see my Partner in Crime after so long. I will make sure that we will go on one of our adventures sooner rather than later!