Yesterday I was up bright and off for a cycle around and old haunt, Richmond Park. It seemed like ages since I had been there but it was to be a very different route to my usual.

Taking my mountain bike - which I have to report is more fun than I had ever expected - instead of my usual circuits on the road, I ventured to something called the Tamsin Trail.  This is a trail just over 7 miles in length going round the outer edge of the park. The surface is pretty good and it is shared by other cyclists, joggers, walkers and what appeared to be the walking dead (those without a clue where they were going or any sense that other people where walking, running or cycling past).

I got there quite early and my first lap was a great deal faster as there were fewer people about. I have not included any ride data for this as my journey started from a friends flat in South Kensington.

The second lap was a great deal slower as lots of people were quite rightly taking advantage of a lovely morning. 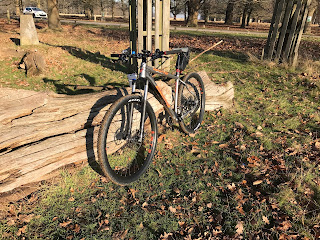 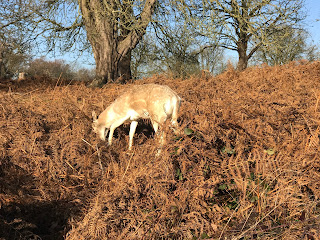 At a few points on the ride around deer were quite happily munching away and blasé about humans taking pictures of them.

When I reached one of the cafes within the park I could not resist a bacon roll and a tea. These were consumed with much enthusiasm. 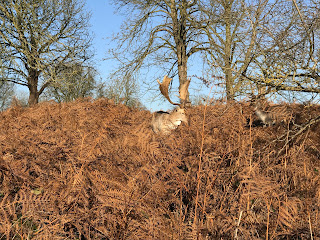 My new mountain bike and I are getting on rather well so far. I do like being able to cycle over the rough stuff quickly and being able to cycle quite happily to Paddington via the Grand Union Canal instead of take the tube has been brilliant. I have done this on a Brompton a few times during the summer months but this has been a quite slow and jittery affair. I am much happier doing this on big wheels and especially ones with such grip.

I do still like my Brompton bikes a great deal but they have been resigned to what I suppose they are intended for - convenient folding bikes for ones commute. For the moment at least the fun is definitely with my Condor road bike for distances/speed and my mountain bike for urban rough and tumble...