A new steed for the hard stuff

Of late my cycling adventures have been few and far between as have my blog posts. On the cycling front I mean to put this right. As far as blogging is concerned, we shall have to see.

I own three bicycles. My Condor Fratello road bike which has been a revelation. My trusty P6L Brompton which is my commuter hack and a super light S6L which I rarely use. Do I need another bicycle? Probably not but I have been itching for a very specific type of bicycle for very specific adventures for ages.

I have written before that I would never spend another Orange pound on another Brompton. I have to say that I stick by this for several reasons.

First of all, Brompton in their wisdom have halted orange as a colour option. Mentioning colours, I have been very underwhelmed by the copious 'special edition' colours which seem to be released at an alarming rate.

Colour is one thing but with regards the components of the bike itself there just doesn't seem to be a huge advance. Now I know that there are new shifters, M-type bar, new grips and a wider saddle but I cannot help but recall seeing a blank wall at the last Brompton World Championships I attended where participants could write up suggestions of what they would like to see on Brompton bikes in the future. It just seems that many of the better ones are unlikely to see the light of day anytime soon. Companies like 'Kinetics' appear more innovative with options for disc brakes, twist-shift gearing and greater range of gear options.

This all probably reads as though I am bashing Brompton. I am not. The truth is, when I took my Condor road bike out for its first long distant ride I could sadly see the shortcomings of my humble Brompton. Gearing, brakes, ride comfort, speed and maintaining that speed on my road bike wasn't just better, it was a lot better. I could also add quick release wheels and a lighter package to this as well.

Of course it would be foolish to compare them. I still love my Brompton bicycles and nothing out there is as user friendly with their ability to fold and go anywhere, however  for longer rides I now relish the chance to use my road bike over my Brompton any day.

Owning a Brompton has been nothing but a positive experience and laid the foundations for adventures I had not thought possible let alone contemplated. In addition I have met and made friends with some wonderful people - some of whom are like me spreading their wings as far as cycling options go.


So, my new steed is a mountain bike by the British company, 'Whyte.' Lots of research went into what bike I was going to get and what I wanted to use it for. When I started looking one thing that shocked me was that the prices of the higher end mountain bike was equal to and in many instances exceeded its road bike equivalent.

Essentially I wanted a mountain bike capable of confident riding over the rough stuff - canal paths, riverside paths, bridal ways, trails and Sustrans routes which can turn out to be navigating through an open field with lions, tigers and bears, oh my! I also wanted it to have good brakes and gearing that made ascending hills easy. It also needed to allow me to participate in light cross country / off road events in the future. 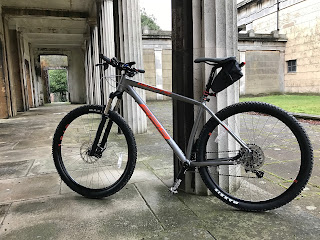 The bike I eventually went for ticked all those boxes and more.  The fact that it had lots of orange elements was - ahem - coincidental. 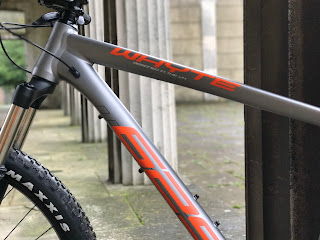 The brakes are certainly impressive. Hydraulic with 180mm discs on the front and 160mm on the rear, it certainly stops!

The front shock absorbers- a RockShox Recon Silver -  are excellent and like most mountain bikes can be dialled to different degrees of travel which makes things firm or more absorbent. I took my new steed for a ride along the Grand Union Canal with some awful surfaces at various sections but all felt as though I were riding on a pretty good road surface.


The quick release on the front fork has a through axle rather that a standard quick release skewer. This adds a big of extra beef to proceedings and also means that alining the wheel first time is all but guaranteed. 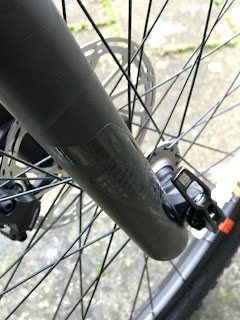 The gearing was a concern. It has a SRAM NX 1 x 11 groupset so there is only one chainring and no derailleur to worry about. Very much in vogue in the past few years. The cassette at the rear is 11-42t and the 42t is bigger than the 160mm brake disc.

I write worry as my concern was whether I could live with a 32t chainring and whether I was just going to spin out on the open road? Well the good news was I didn't have to worry. Now this bike is not going to compete with my road bike in terms of acceleration/speed but I could quite happily cruise along at 20mph on the flats without turning the pedals like a maniac. I suspect that I would spin out at not much more, perhaps 22mph but so far road conditions have not allowed me to put this to the test. 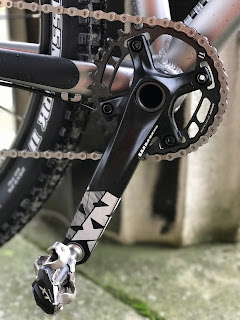 For the last two days I have cycled quite a bit on the Grand Union Canal. Yesterday saw me cycling to Little Venice. A few very steep canal bridges with those raised groves used in the past for someone to get purchase when dragging a barge by a rope, provided no fuss at all. This was due to the gearing which is astonishing. I love hills and I fancy on this bike, with this gearing I could ascend just about anything.

One section on this mornings adventure of about 2 miles going towards Denham was nothing more than thick mud. On my Brompton (no way with my Condor road bike) I would have been off pushing through and in the process of having a fit of the vapours as it was getting dirty. On this bike I simply moved the chain up to a couple of larger cogs and was able to easily cycle through the near treacle-like mud.

The wheels are 29r's and the tyre choice is differentiated from front to back. The front is an ultra aggressive Maxxis, Ardent and the rear an only slightly less aggressive Maxxis, Crossmark II. These tyres and rims are tubeless ready so if I take that route in the future I can. 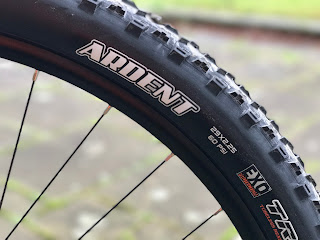 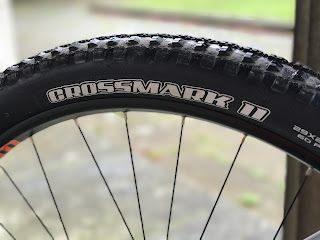 The huge tyres together with the front shocks seem to work some sort of magic on terrible surfaces, making them seem like a good road. 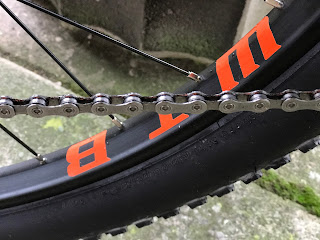 I was concerned that the tyres being so big and butch would make things horrible for when using on the road. They don't. Yes I will be slower on the road when compared to a thinner road tyre but their ability to let you go much faster over awful surfaces is wonderful. The grip they afford is immense and this does instil confidence.


The stock seat is light and very comfortable and I have no plans to replace it. 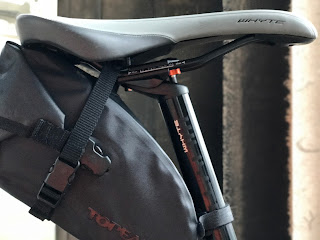 The handlebar is wide at 720mm. This is really comfortable and good for road and off road cycling. It also provides vast real estate for lights, Garmin and phone mounts. I like it. In fact I one of the reasons I have felt confident in cycling off-road and into new territory is because I can mount my iPhone 7+ and get turn by turn navigation. 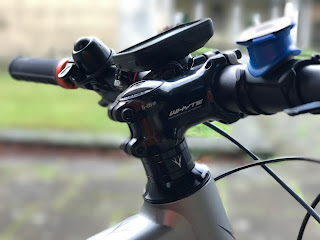 The grips are very...grippy and I suppose like all hydraulic brake levers, only the slightest touch is needed. 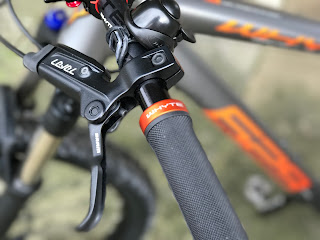 The headset is silky smooth and very different to that of my Brompton which by comparison is not. It is also better than that of my Condor road bike. 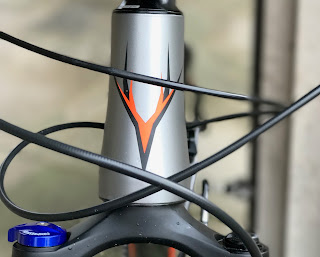 This is obviously a much larger bike than my road bike but despite the beefy tyres, front suspension and heavy duty rims it weighs in at 12.5kg. My P-type Brompton is heavier.

This morning I headed out again on the Grand Union Canal and when I got home the bike was splattered in mud, as was I. This did not bother me. A mountain bike is meant for journeys you wouldn't or couldn't do on other bikes. (I did give it a clean naturally). I won't be wearing my finest Rapha on this unless it is in the summer and dry! 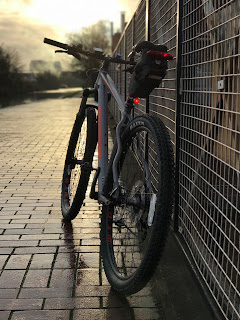 Perhaps you can understand why I would not buy another Brompton. If they made it considerably lighter, had better brakes, better gears and reintroduced the colour orange...who knows?

I can see me using my new mountain bike quite a bit in the coming months and I am already planning the routes for several adventures that I would be terrified to contemplate on a Brompton or my Condor road bike.

The last time I owned a mountain bike was when I was a young teenager. I recall going everywhere on it as it was fun to ride. This new bike is as much fun if not more - perhaps also because of all the rather lovely technical goodies that all work well together. With this added to the stable I think there will be many more adventures ahead.