Those who know me in a cycling capacity would probably say that I am a little OCD as far a my bicycles are concerned. I am not alone in this. You know who you are. I mean, my Condor road bike has not been allowed out in the rain and would not leave the house even if there the slightest prediction of precipitation. Yes, I like to keep my bikes clean. My new mountain bike has taken me to a state of being I had not thought possible. More on this later.

An early riser and one of those people who do not like to waste a day, I was soon up and out on my new bike. It was a little before 07:00 and it was still dark. I took my powerhouse of a front light - Exposure Toro - with me as part of my route involved navigating a woodland trail. Yes you read that right. Me on a woodland trail, off-road and in the still darkness of dawn.

I am glad that I brought it with me as proceedings would have been terrifying without. Strange little creatures ran across my path. Unknown flying objects, tweeted and flew as I glided past. One very small section has an extremely steep incline but even going halfway up the chainset it was a piece of cake. 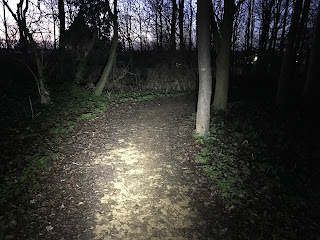 Much of my route saw me cycling along the Grand Union Canal. I am liking this little route into London as it is traffic free and on this bike does not take too long.

I really like my new bike. On the open road it is very comfortable and although I am slower on it compared to my road bike, I am can still happily cycle along much faster than I can on any of my Brompton bikes. Once on a canal towpath, trail etc.., things are a very different picture and it is in its element. There is just no way I on these surfaces - although others I am sure might be able to - could cycle as fast or as confidently.

There were a few people out an about, mainly dog walkers, joggers, other cyclists and what appeared to be a few people walking to work. The vast majority of people I passed were very pleasant and responded in kind to greetings of, 'good morning.' Unfortunately I encountered a couple of walkers who walked shoulder to shoulder and would not give way to any cyclist or jogger. I watched this from afar and when I got close I simply cycled on the grass to the right of the path and shouted out, 'Merry Christmas!'

As I cycled along the sun came out and I spied the familiar and welcome sight of Trellick Tower. This is a Grade II listed building in the brutalist style designed by the architect, Erno Goldfinger. It is a love it or hate it sort of thing I suppose and I am in the former camp. 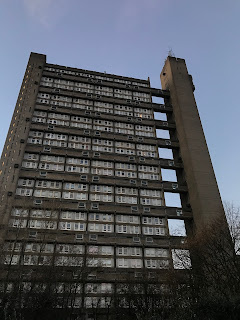 When I reached Paddington Basin which has been and is still being developed I stopped for a cup of tea bought from one of those coffee establishments that happened to be open and a few sweets I had brought with me. 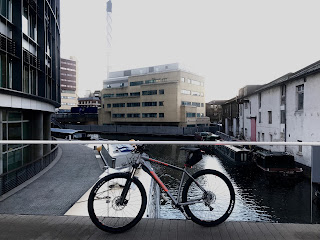 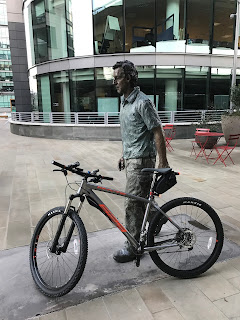 Two states of men, one standing and the other walking by artist Sean Henry caught my attention for a few moments. I do like these but he does seem to be a one trick pony as much of this other work is along a very similar theme. 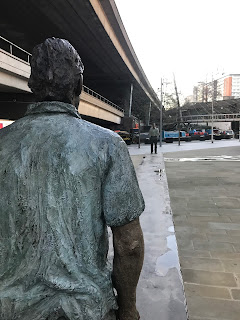 After taking these last pictures I turned round and headed back home. In all I cycled 27.93 miles at at average speed of 12.2 mph. The maximum speed was 19.5 mph which I did on a section of flattish road just after entering / exiting the canal section.

When I got home the rear of my jacket was covered with a splattered mud stripe and only then did it dawn on me that the seat of my shorts was wet. I will have to invest in one of those Ass Savers, although the wider version for mountain bikes.

My bike was filthy so before us all having to venture out I gave it another therapeutic clean. It is really strange but I still don't care what state this bike - or I - get into. It would seem pointless buying it if I did. I just love the fact that this bike really can go over almost any surface - however steep - and if it or I get a little dirty in the process, well that is half the fun!
at December 26, 2016