East to Olympic Park on a Brompton

The adventure today was to cycle from the London Eye on the south side of the river Thames all the way to and around the Olympic Park. I have to say that I was looking forward to it greatly all week and it was with some enthusiasm that I set off early.

Unfortunately traffic was terrible for some reason and this meant that rather than cycle to the Eye I was forced to take the tube. Exiting Waterloo you would think that it would be easy to find the London Eye as it is but a step away. An initial wrong turn -surely an easy mistake - resulted in me losing my bearings somewhat. After consulting Google Maps I was back on track and made it about five minutes late.

I was the last to arrive and it was great to see the familiar faces of Mark (King of the Hill) who I have not seen enough of recently and Geoff who has kept me going on countless night rides. In fact Geoff had brought his brother with him and his newly acquired orange and green Brompton.


After a quick briefing we were off and heading east along a familar and favourite route. The sun shone through very little cloud and the skies were an ever increasing blue. It was a cold but rather fine morning and the rain from the previous night had done its worse and wouldn't be troubling us. 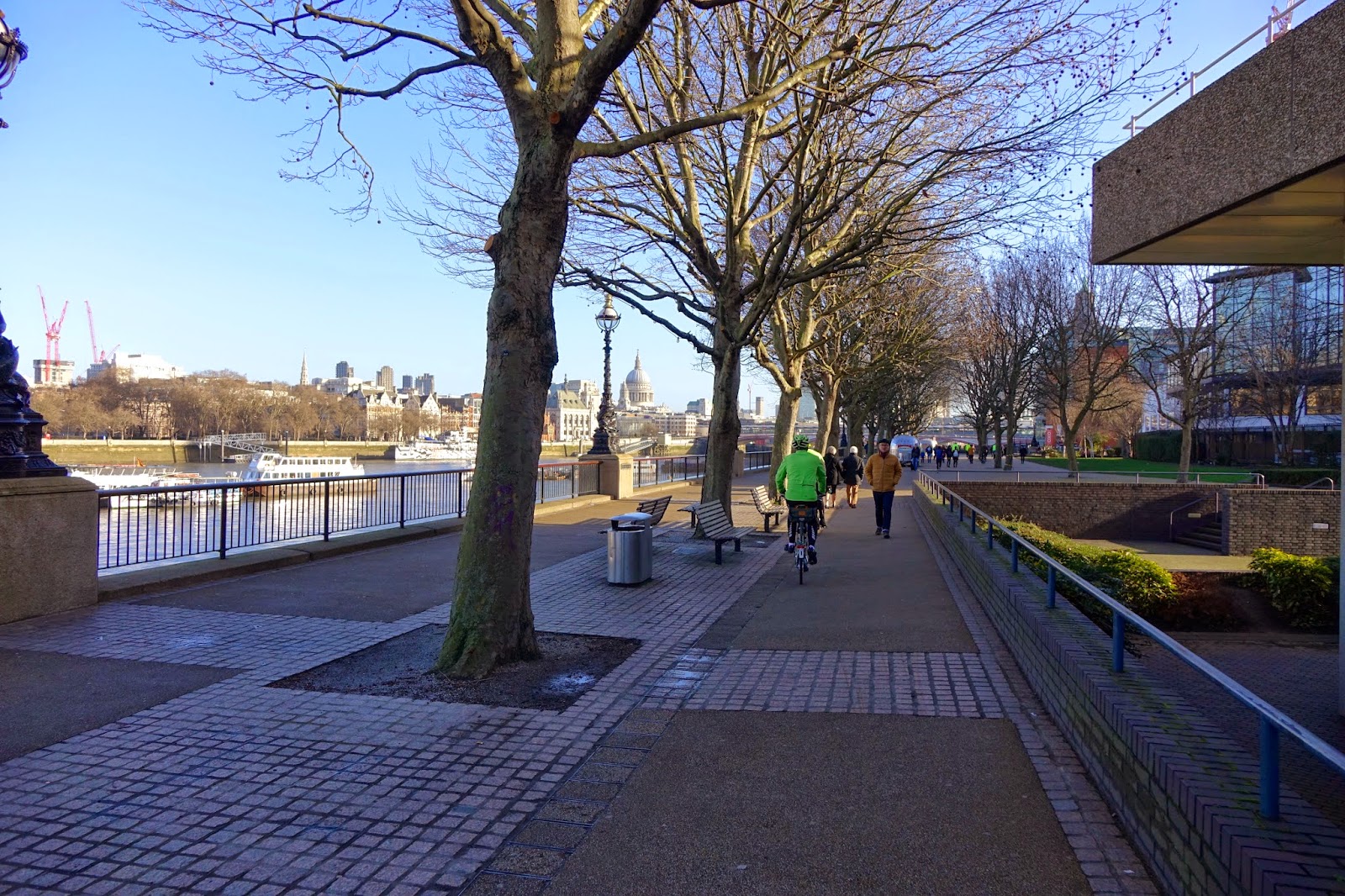 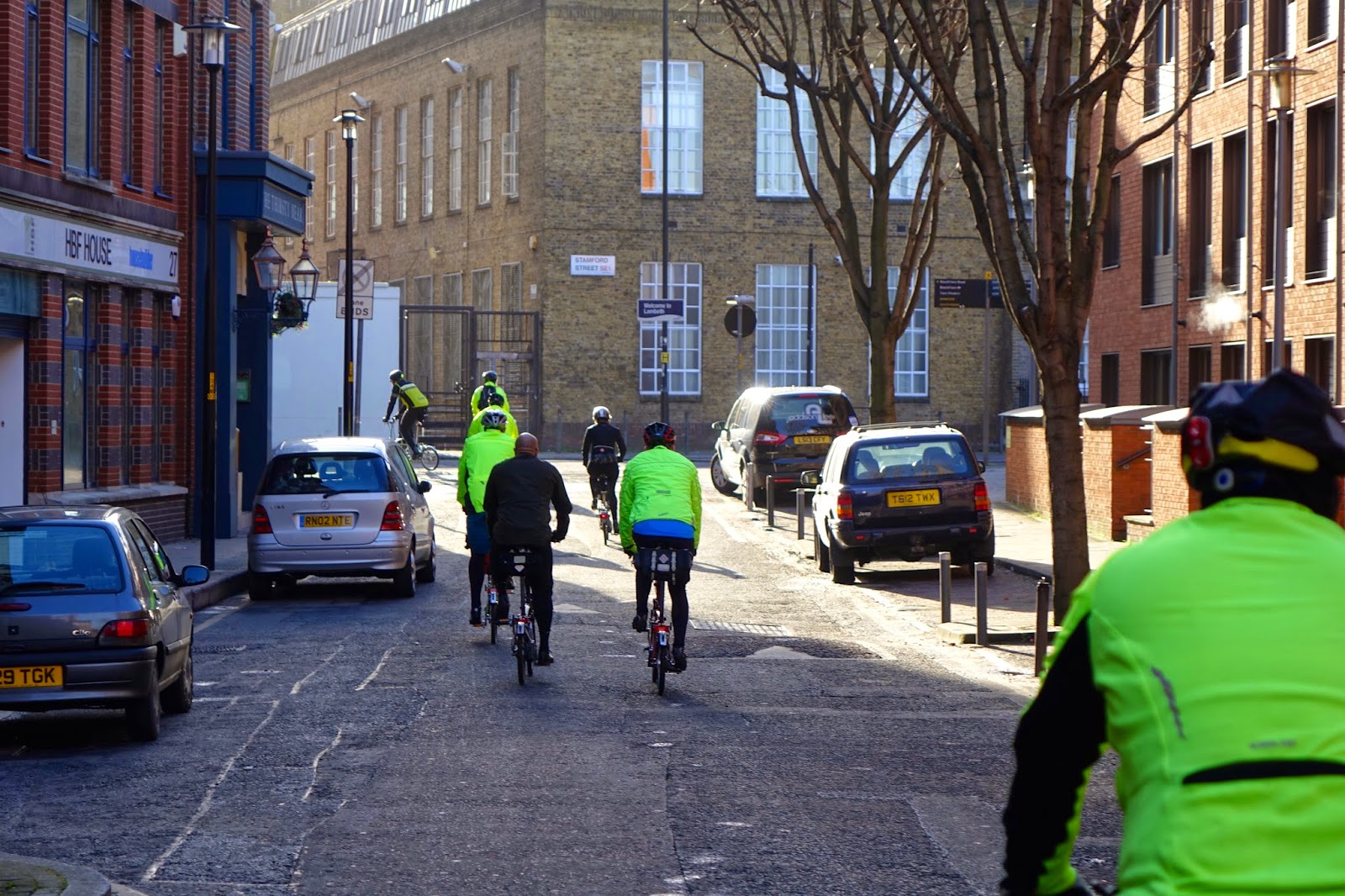 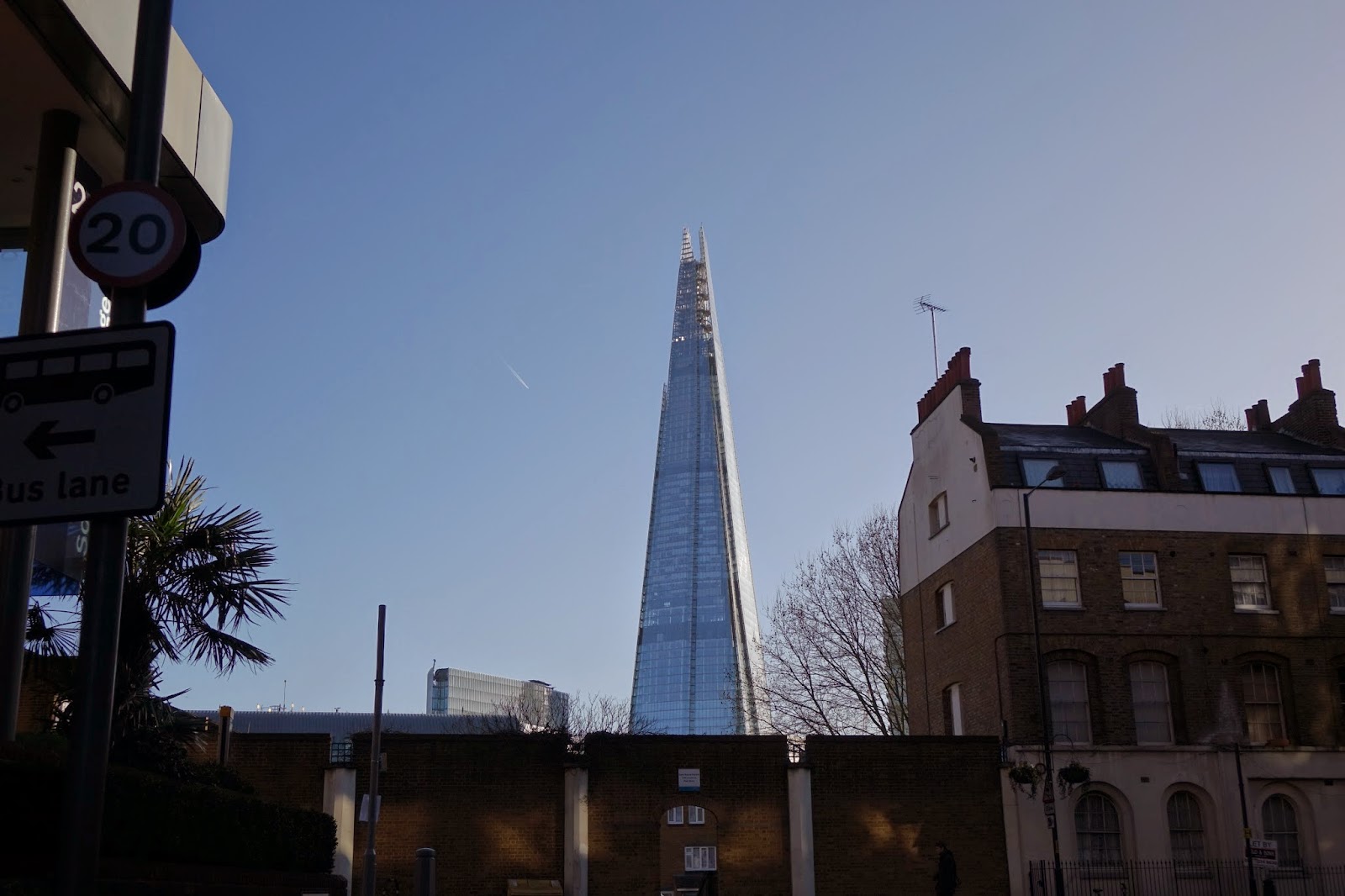 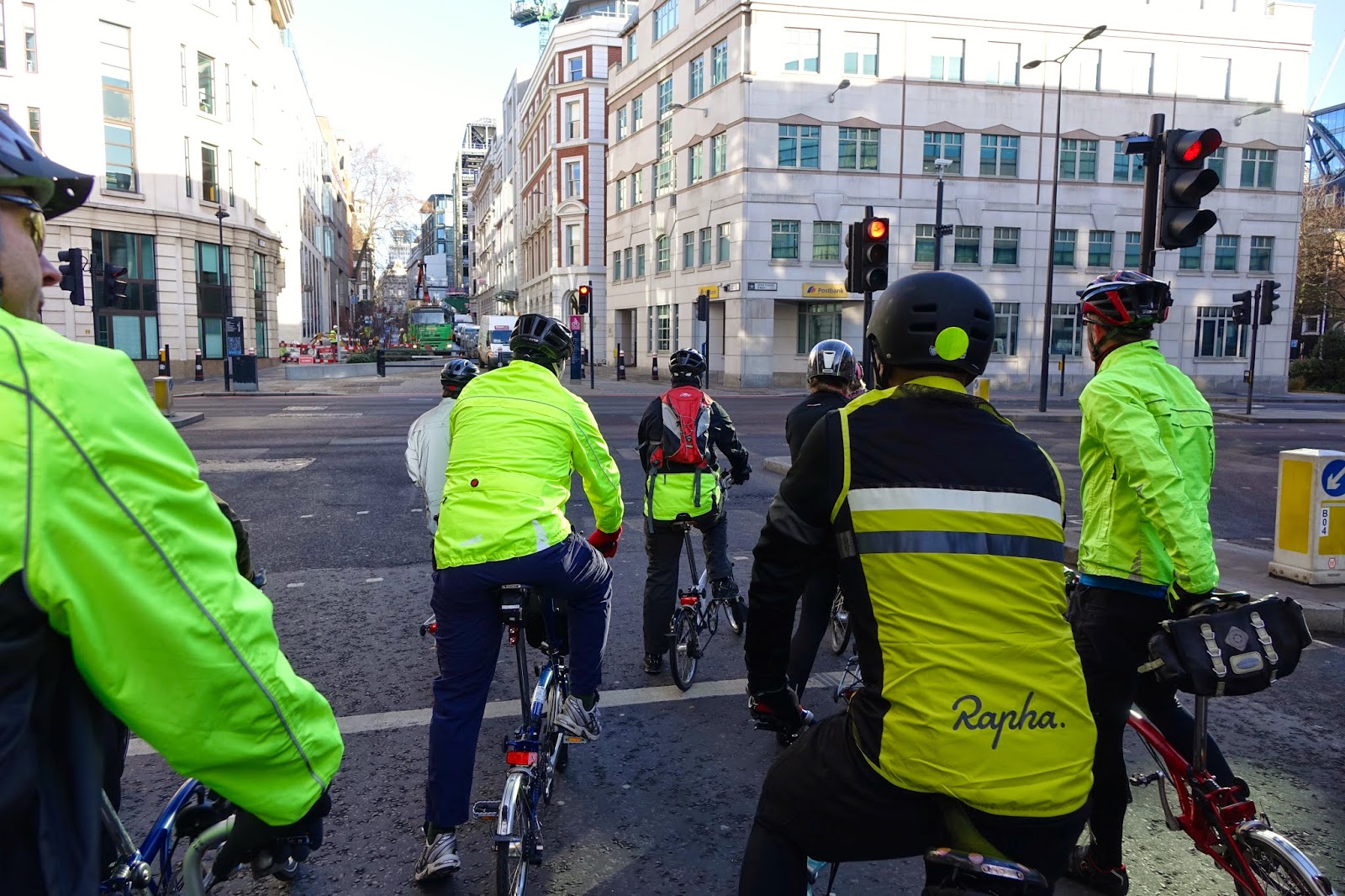 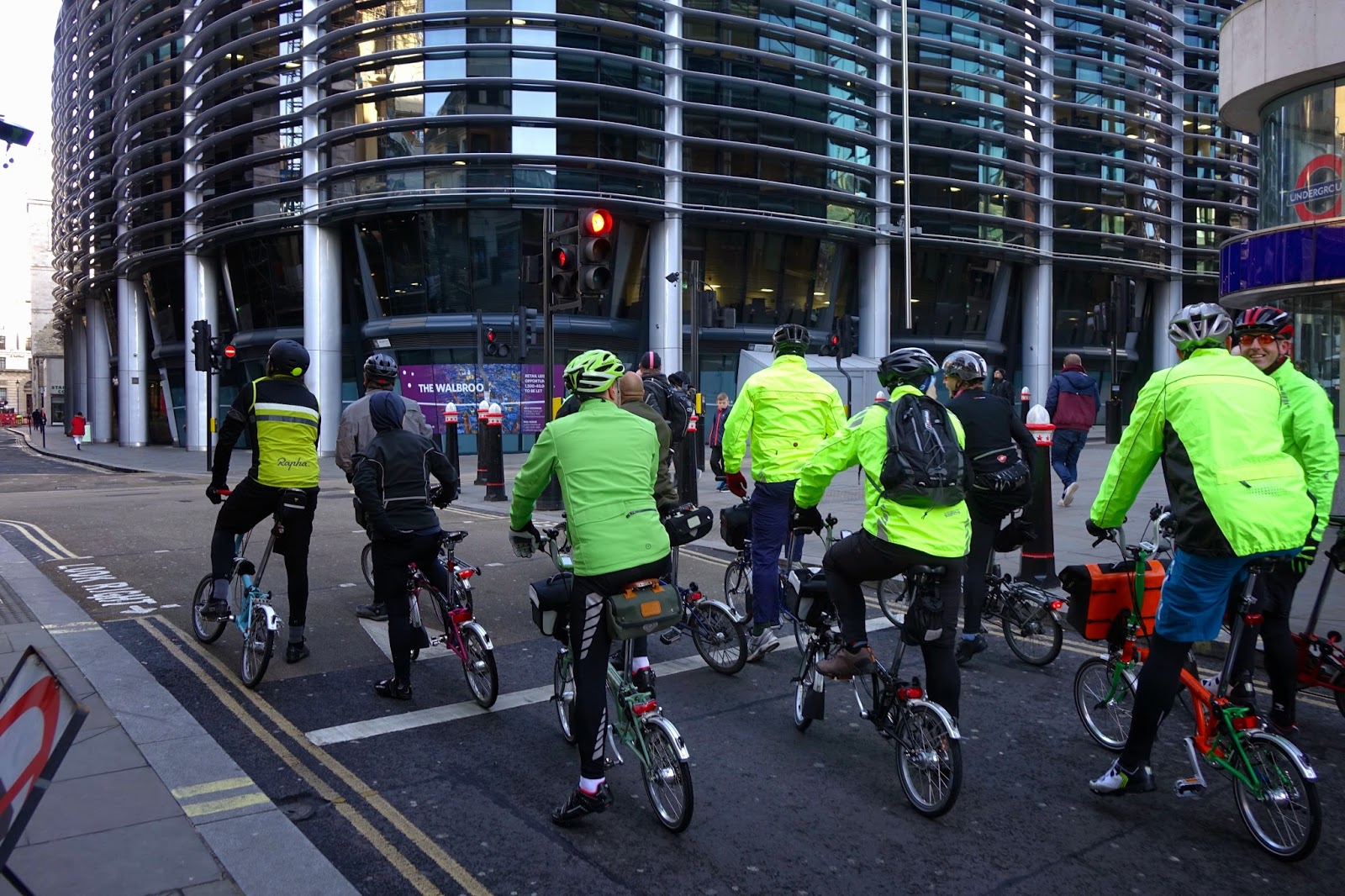 At the views of Tower Bridge I recalled the time I slipped on decking when out with my riding partner Andrew. No decking or trips this time round thankfully. 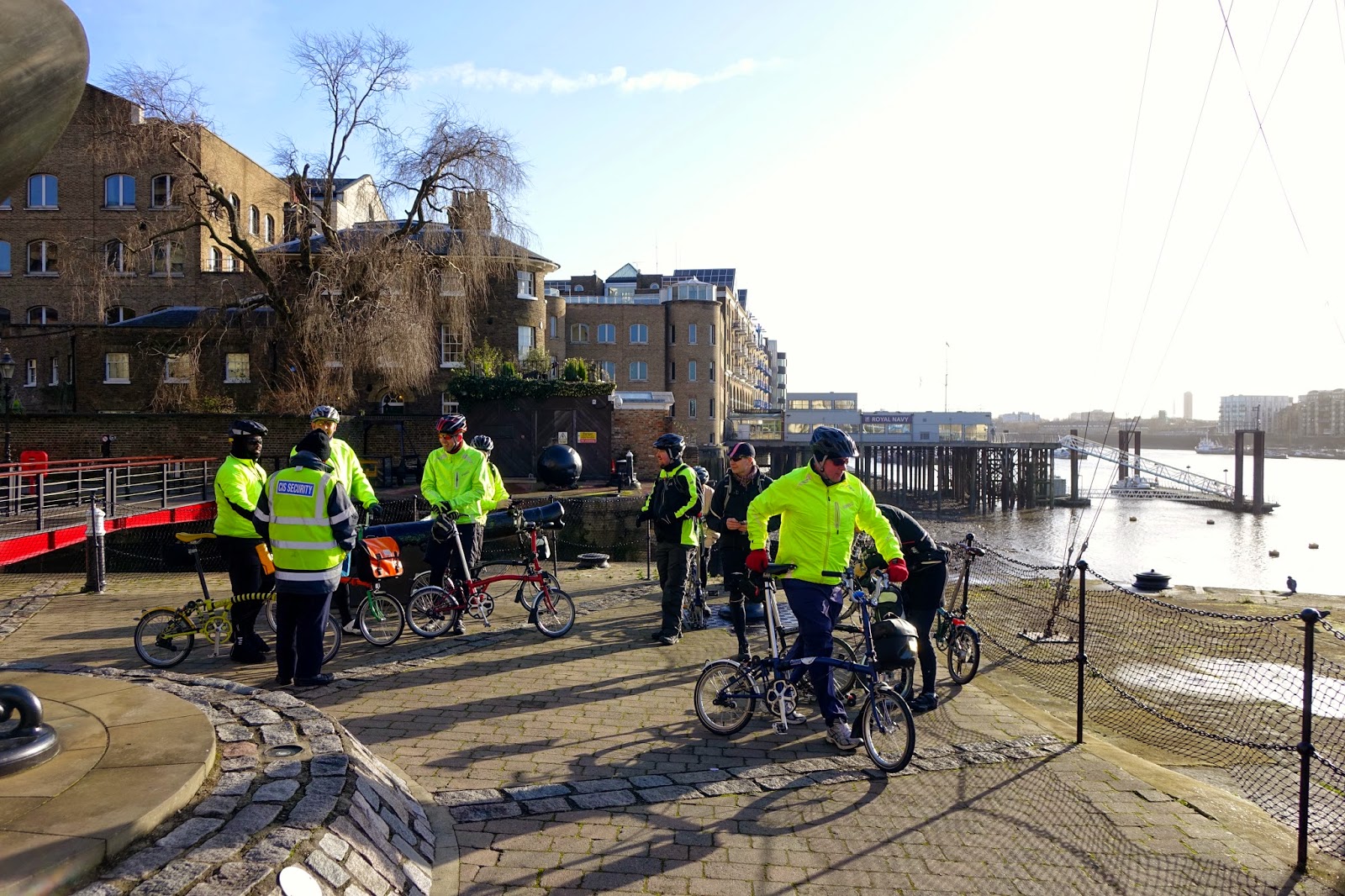 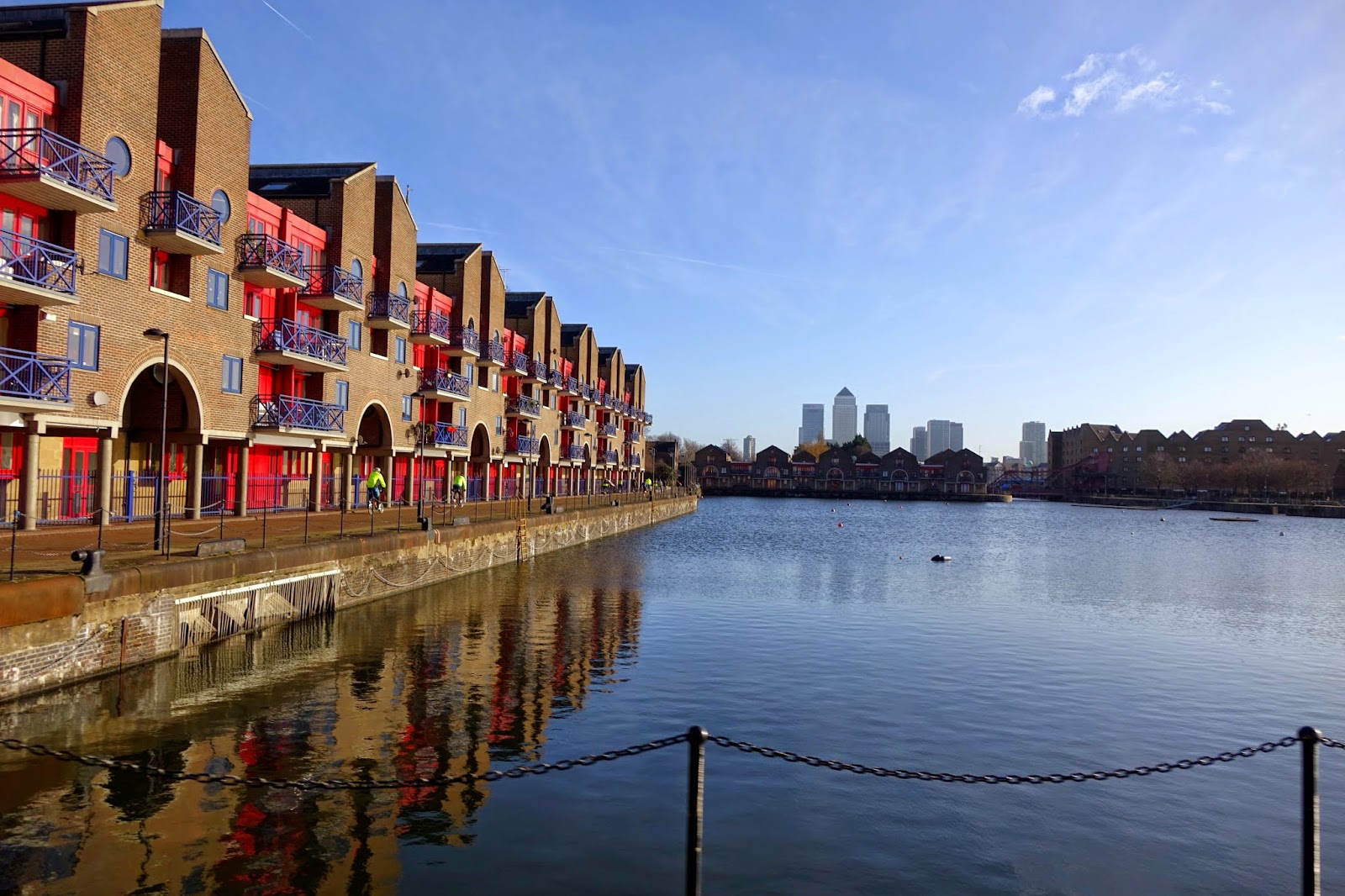 We cycled further along the river Thames and as per usual when at low tide there were a few people mudlarking. I suspect they were looking for small items forgotten in time such as coins, clay pipes and what have you. I remember having a go at this many years ago and was told that as long as you are prepared to put in the time and look carefully, you stood a good chance of finding something of interest. 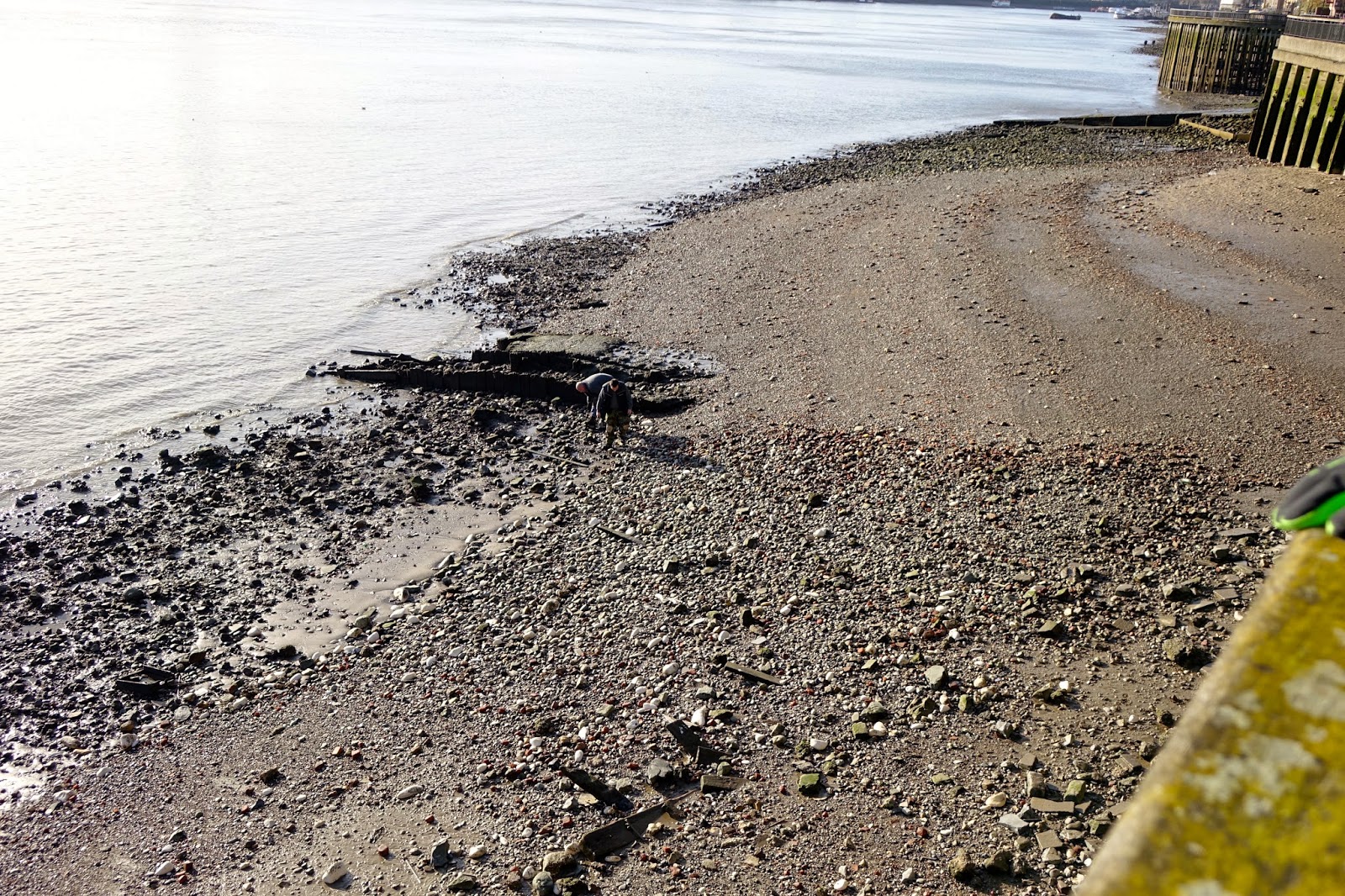 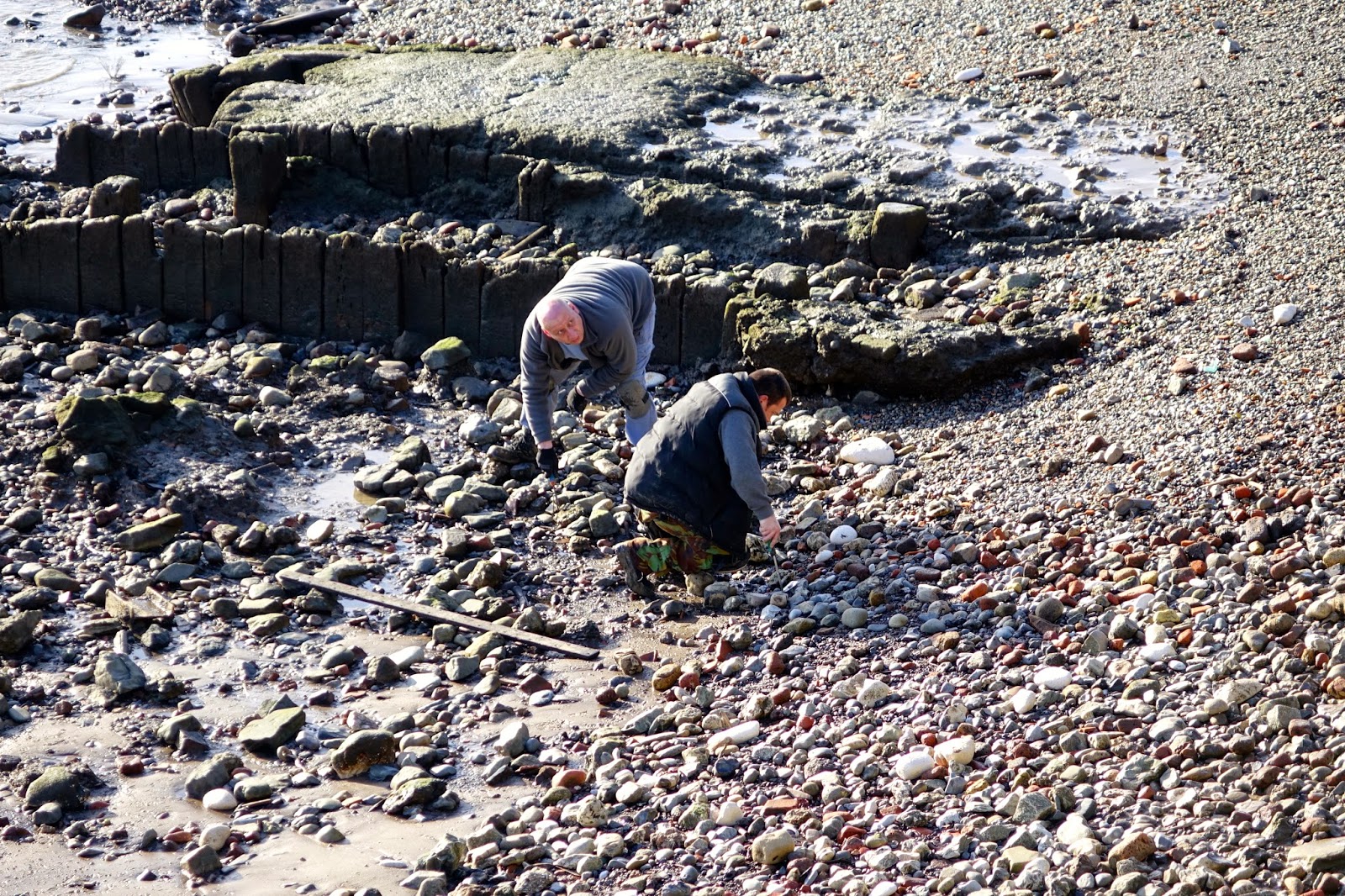 The good weather, as well as brining out the Bromptonians brought, joggers, walkers, dog walkers, personal trainers and their trainees and other cyclists who have yet to see the light and purchase a Brompton. 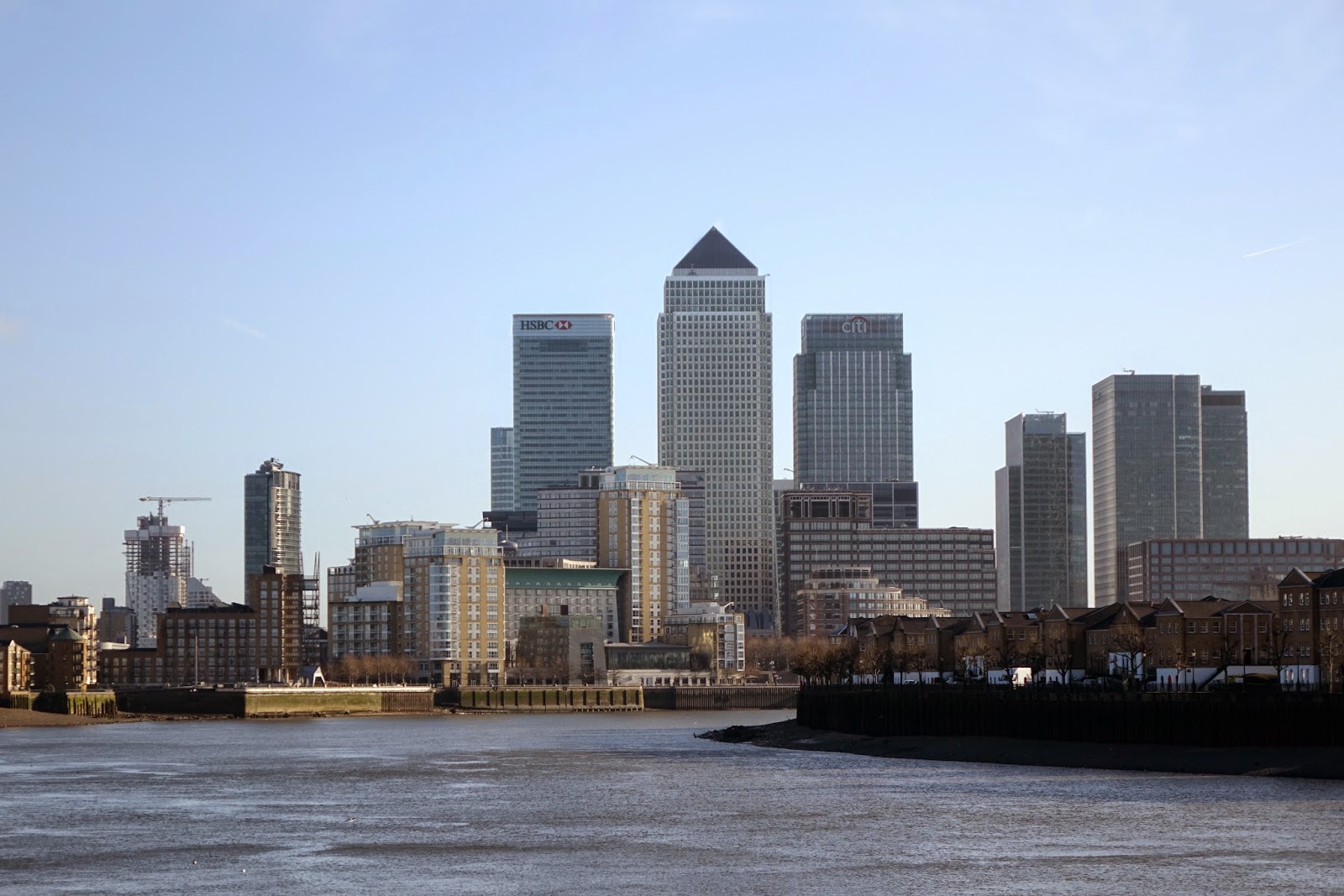 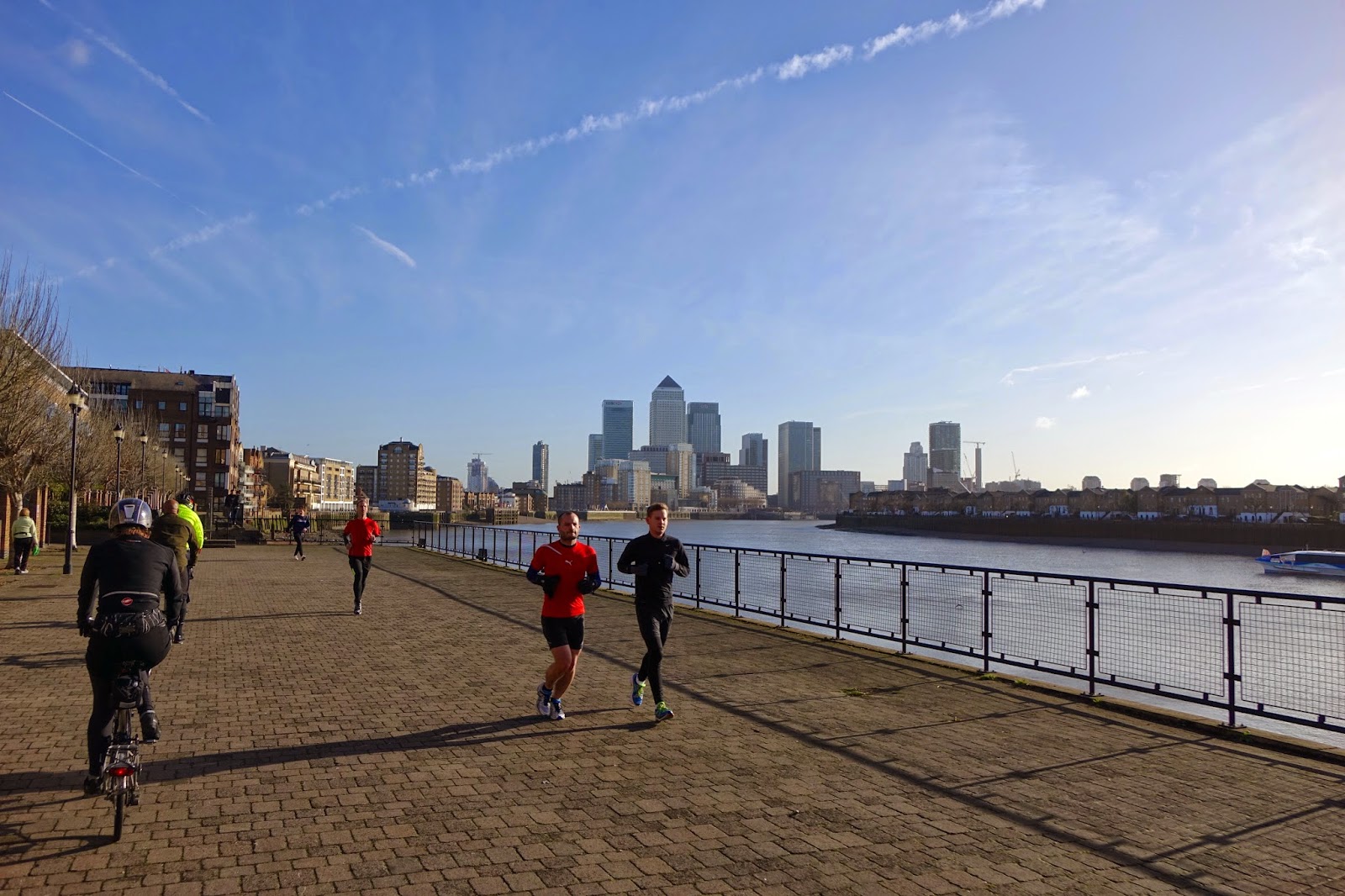 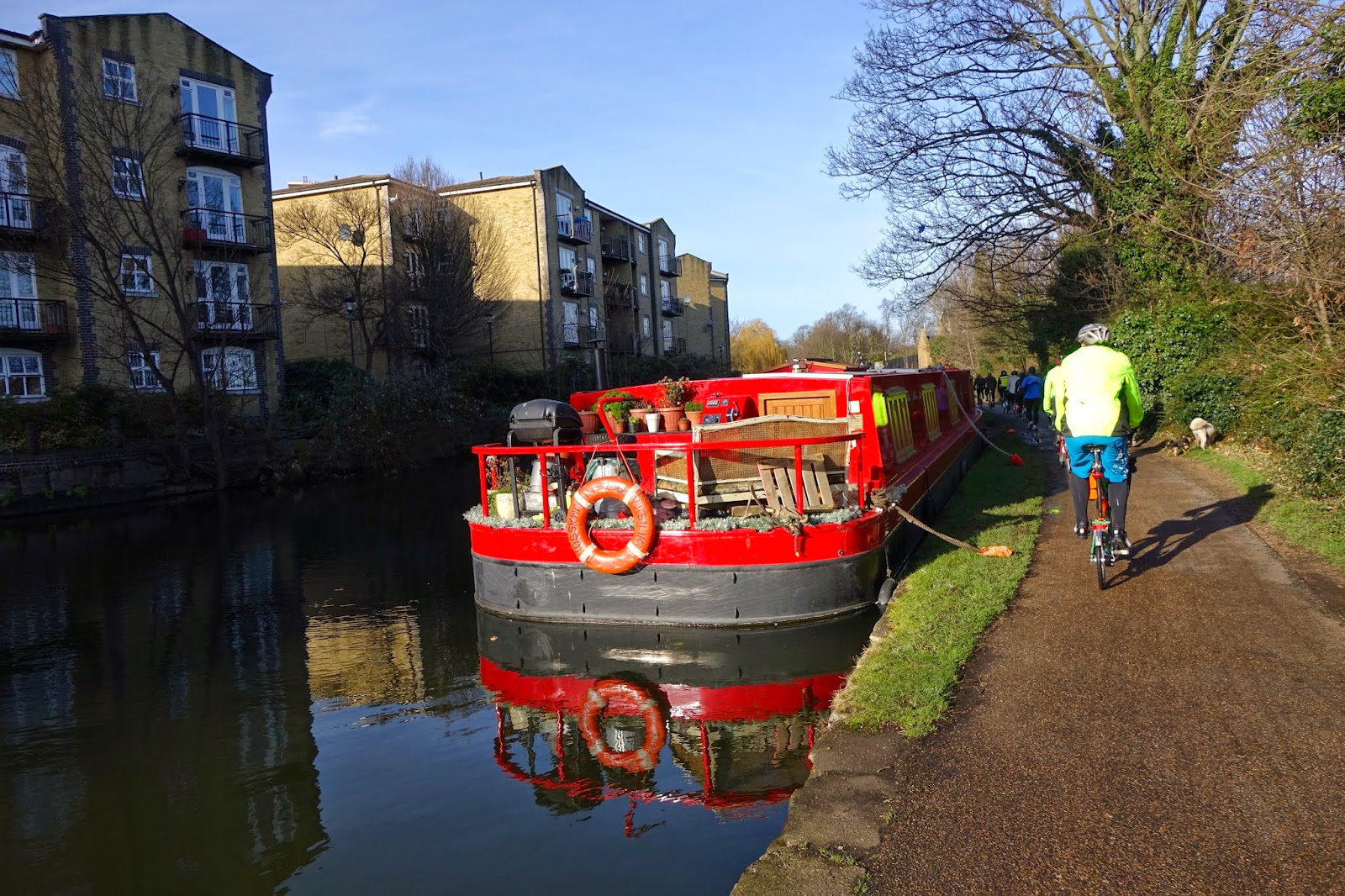 Not having a clue where I was we entered a park and I was informed that we were in fact in Victoria Park. It was here that we had a chance meeting with Brian. He is a fellow Bromptonian and the last time we saw each other was at the Brompton World Championships. Small world. 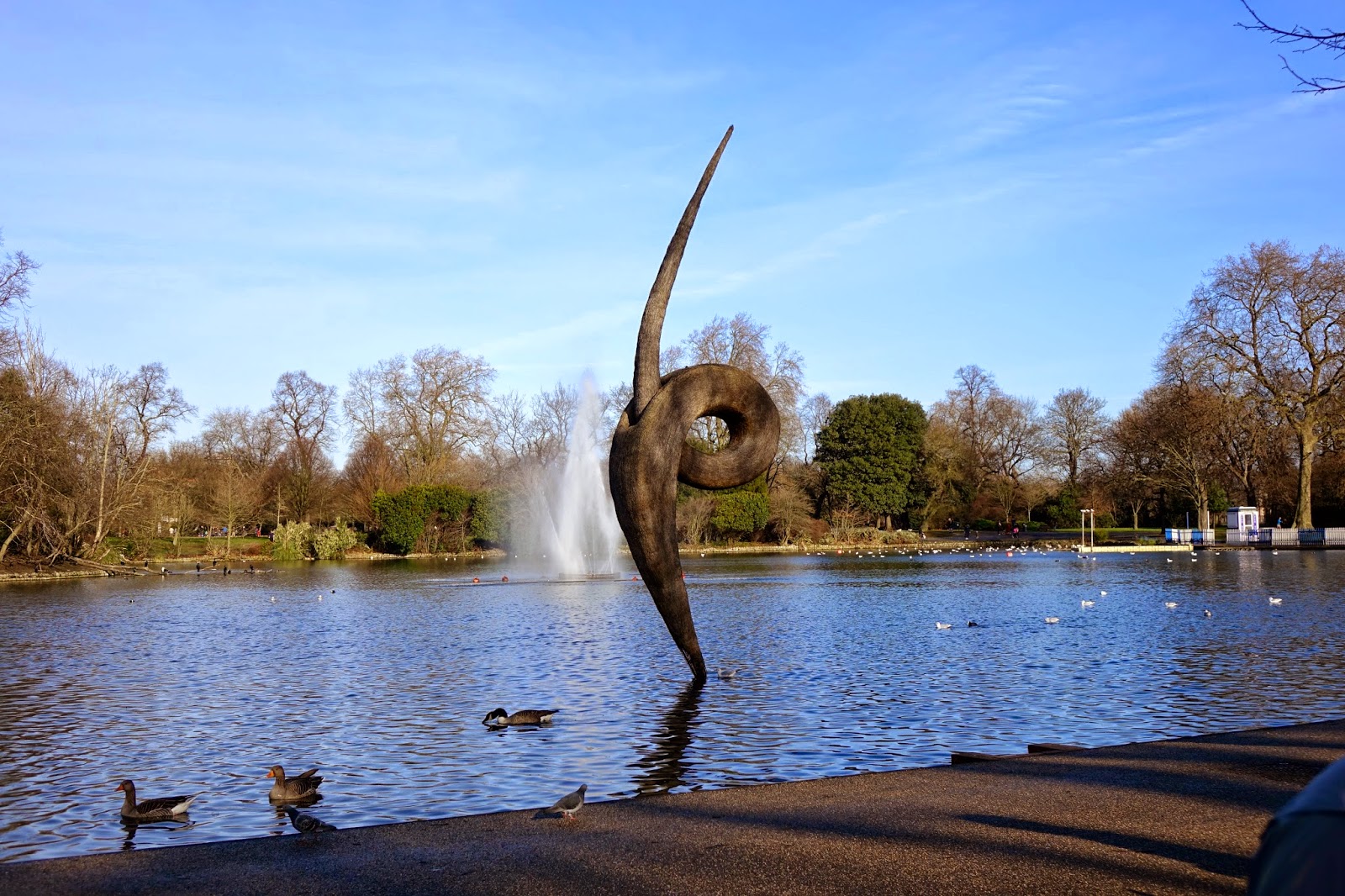 Part of our route - which again David had made interesting - was along canal paths. One particular wall covered in graffiti provided a suitable backdrop for copious photo opportunities. 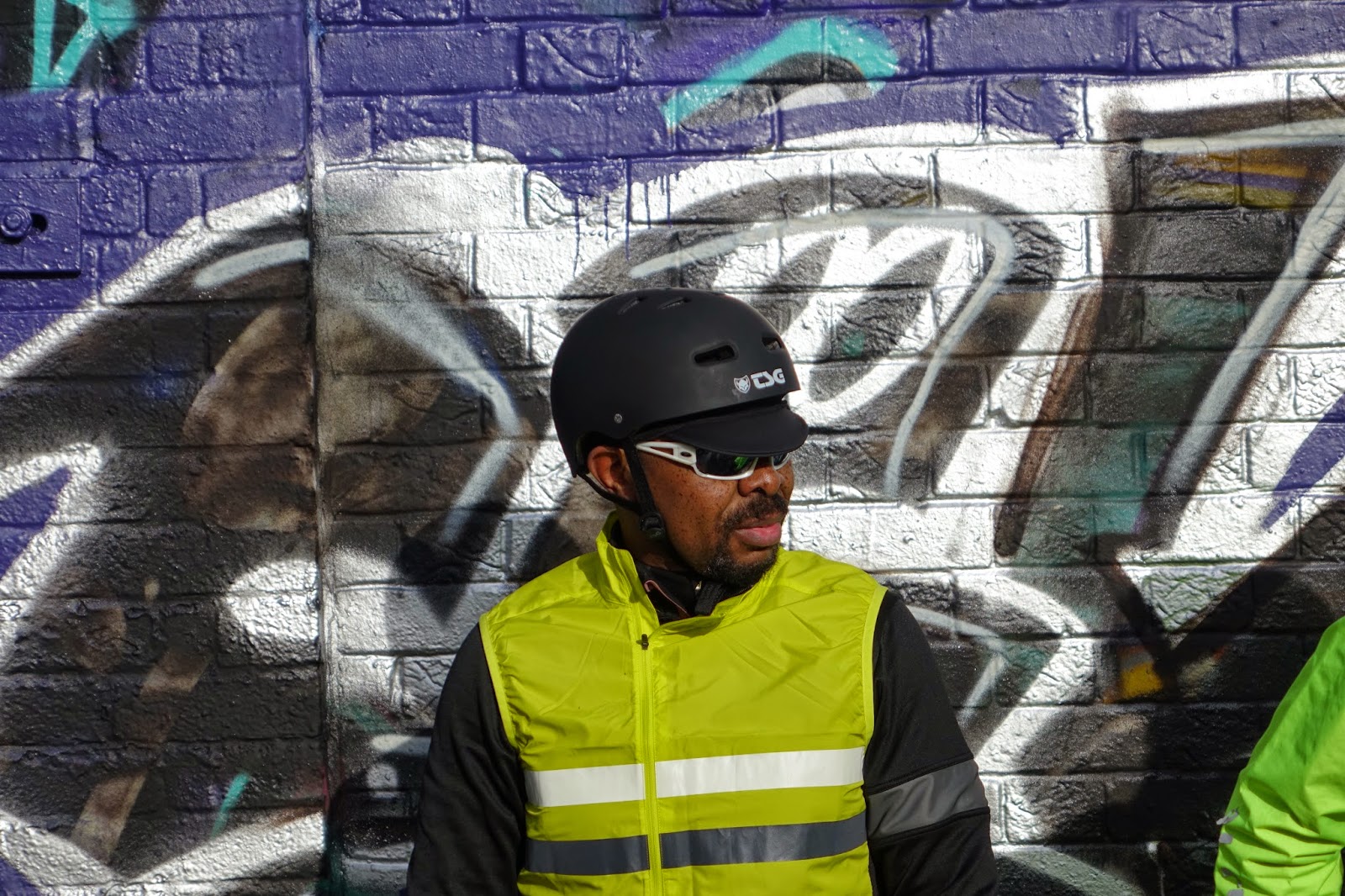 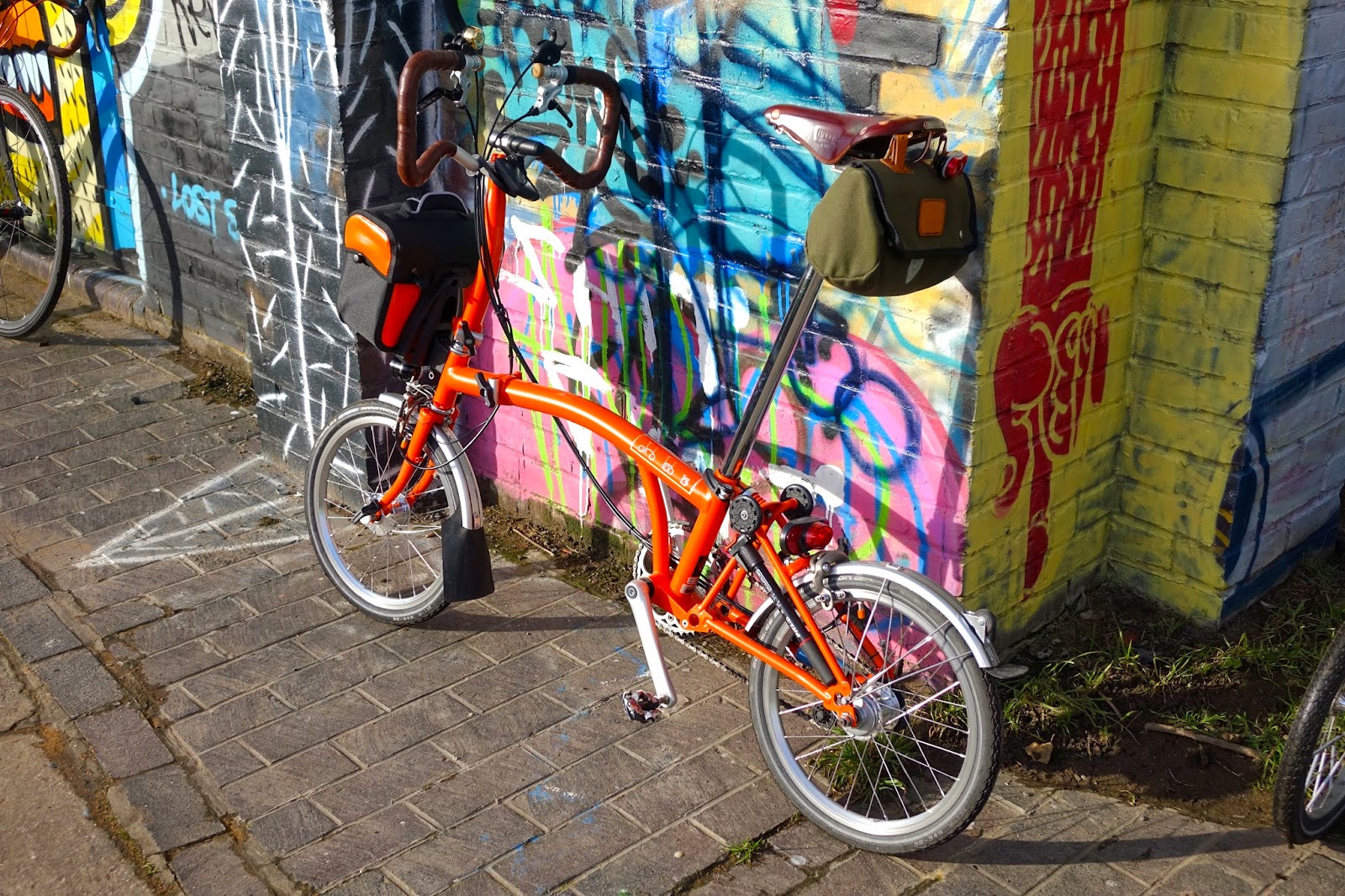 This stretch of canal path proved to be of great interest as there were a huge variety of barges and boats. An orange hulled vessel was of particular interest. 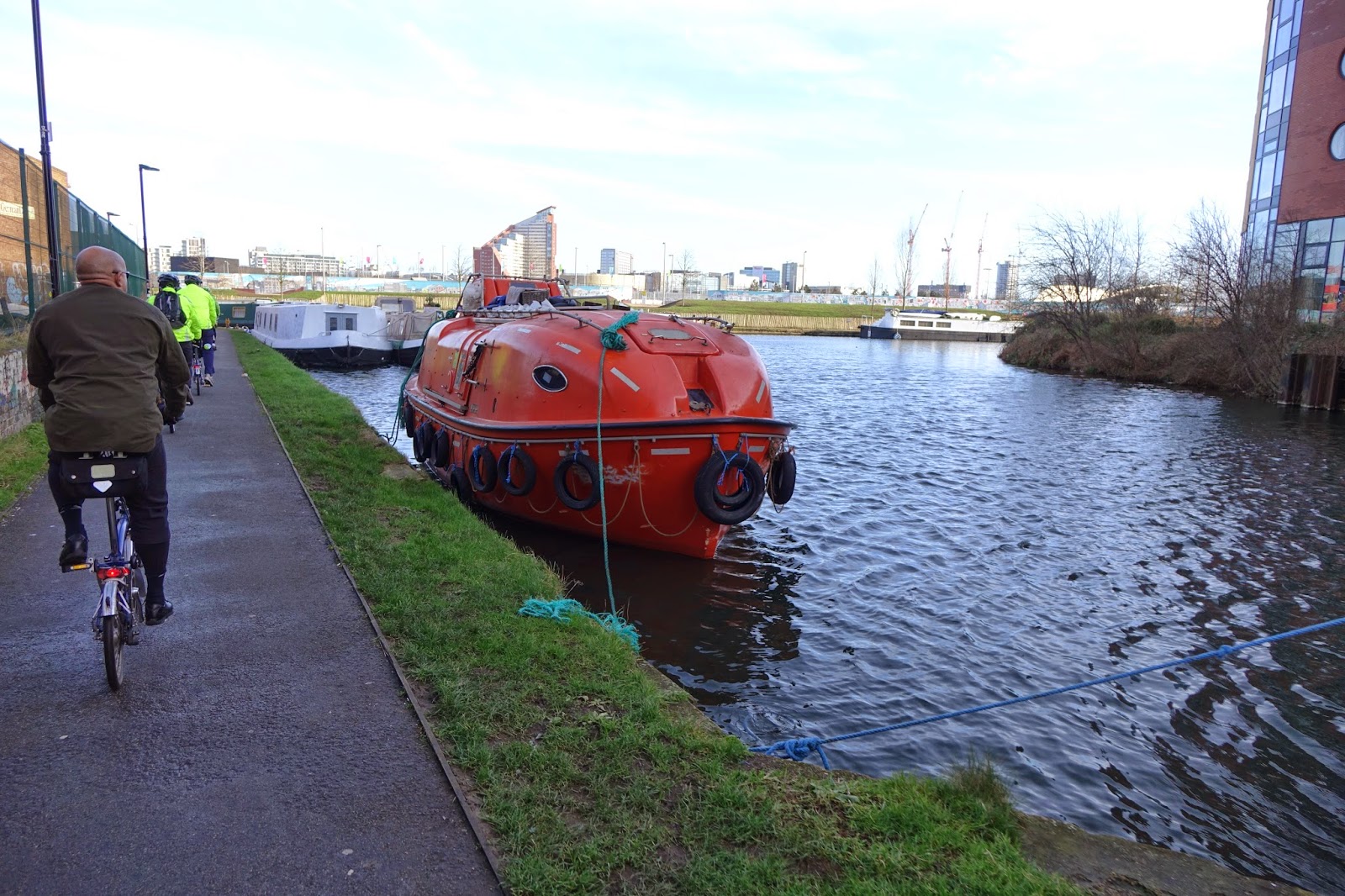 Something I have not seen before on a canal was a couple of rowings eights - male and female. They looked pretty good to me and must have been part of a local rowing club. I wonder thought whether they are ever able to reach top speed on a narrow and possibly busy waterway? The Olympic Stadium fell into view and our route was one that snaked all around it. The Velodrome looked spectacular in the distance and even better up close. 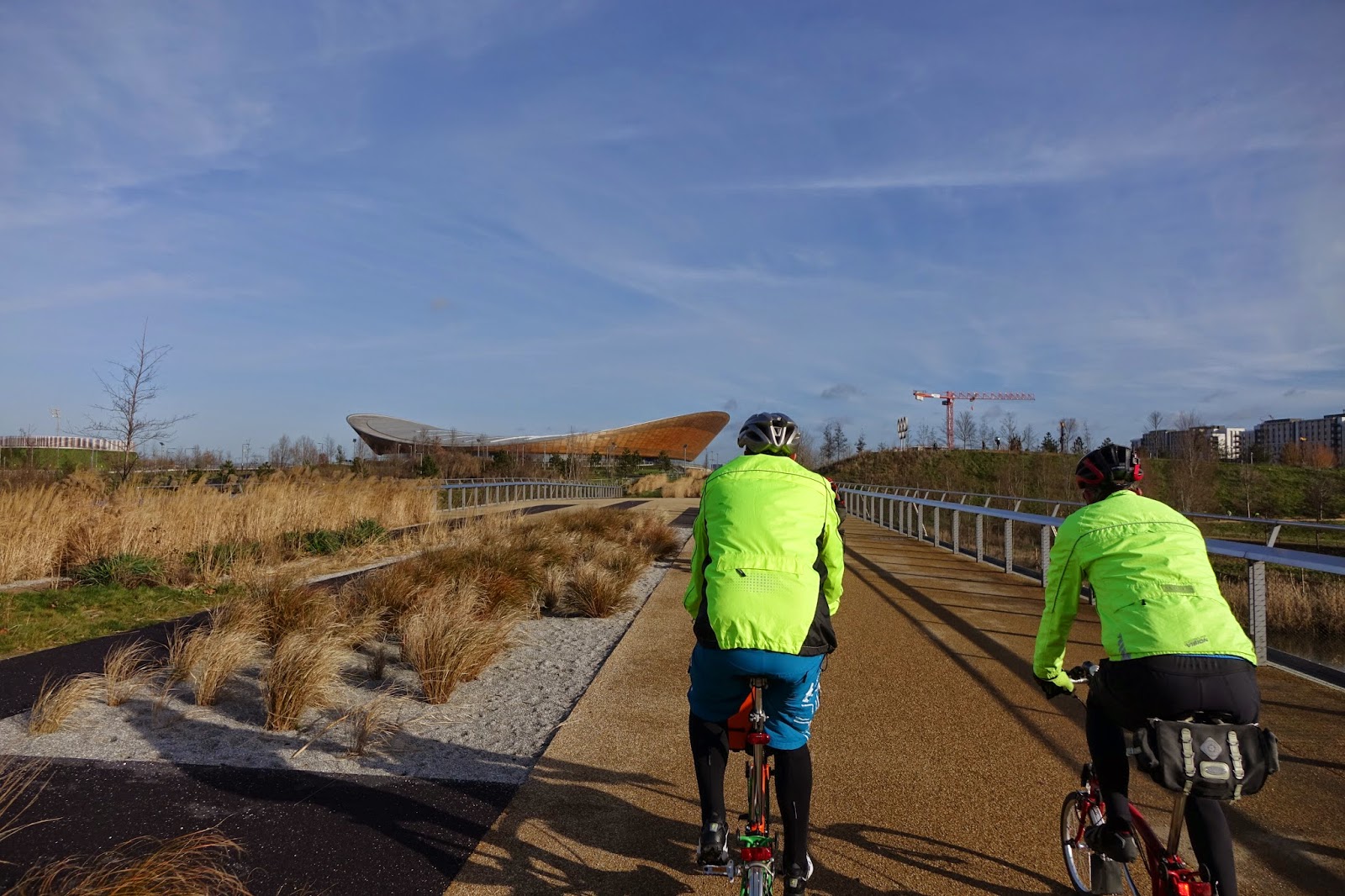 As I was taking the picture below I could hear a coach providing let us say honest advice from within. One day I will try and venture inside. 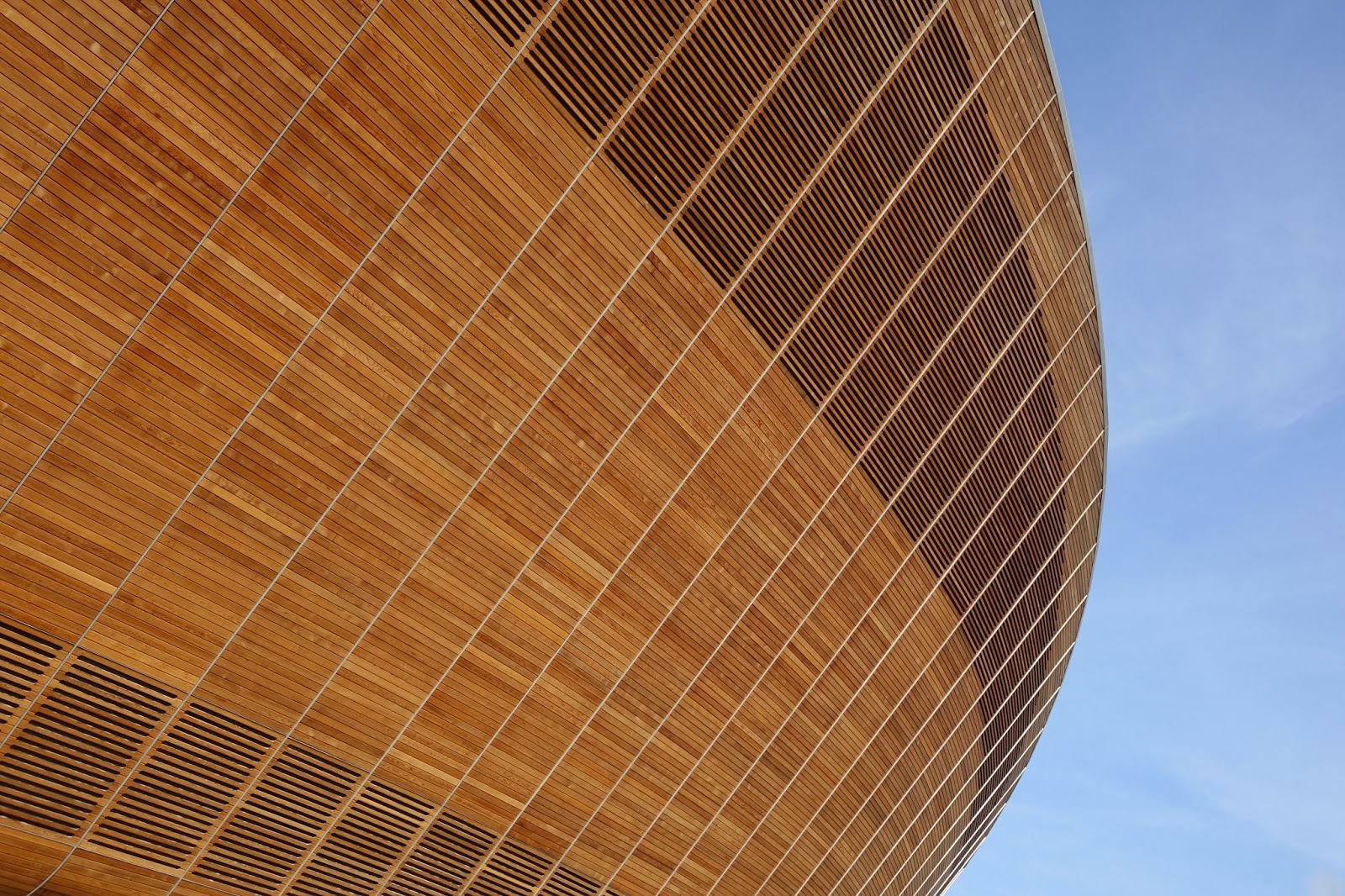 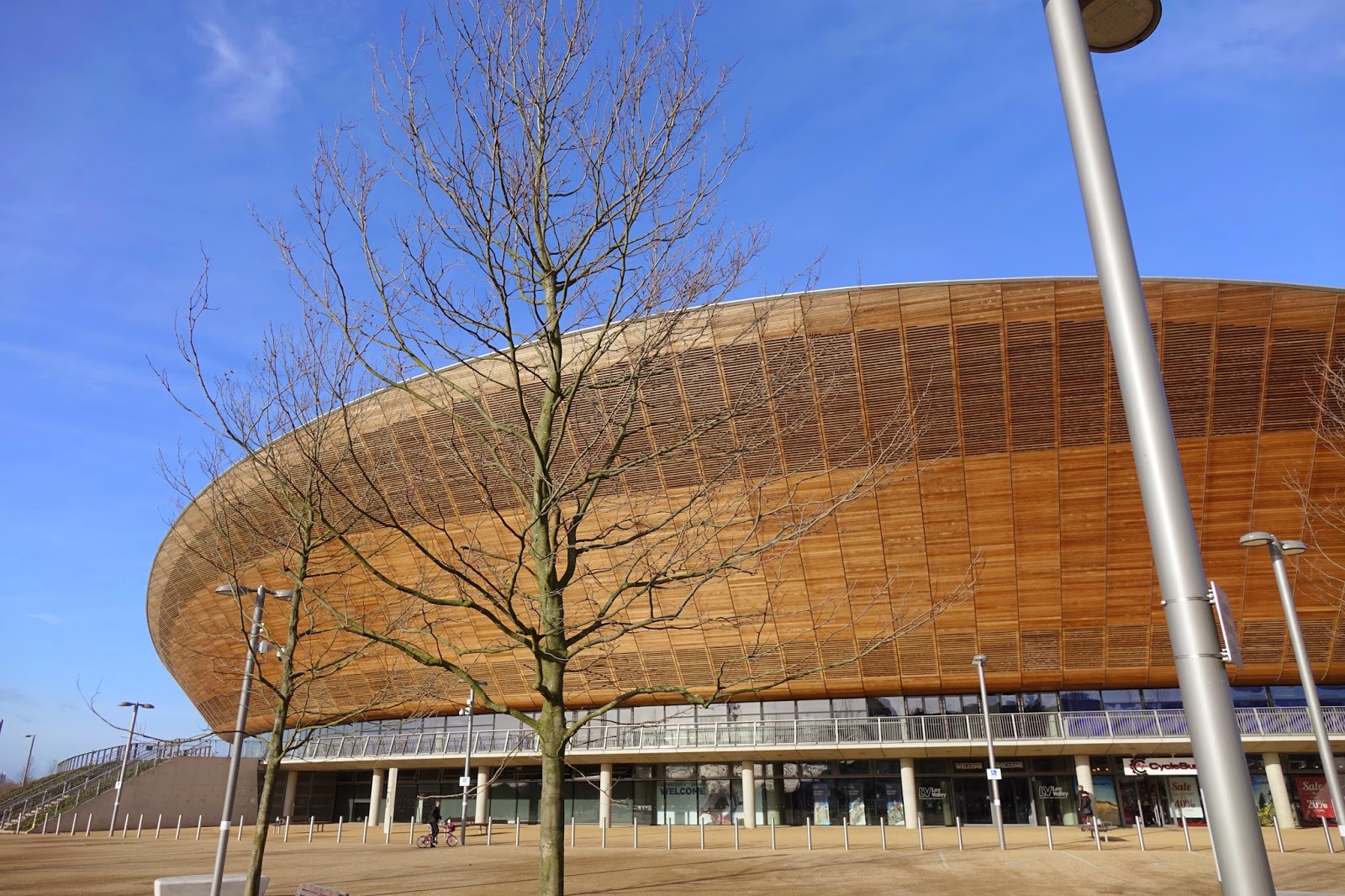 Sadly my adventure was cut short. I had planned to leave the ride as soon as we reached Greenwich as I had plans later that evening but I had to depart even earlier than anticipated. This meant me trying to get to Stratford railway station. Putting the route into Google Maps I quickly said my goodbyes and cycled the two miles at full pace.

Once there I boarded a train bound for Richmond and I was off. Regular readers will know that I dislike public transport and this journey confirmed my worst fears. A lady on the carriage was vocally recalling passages from the Bible. I didn't dare to point out that she was in fact inaccurate in all but two of her references to various Gospels or that she was factually wrong in what she was saying. In a nutshell she asserted all on the train would be going to hell...apart from her.  Thankfully, four stops later she got off.

Tutting and wishing I had simply got a taxi a chap got on, almost replacing her and proceeded to sing very loudly and in a rather sinister way to music on his iPod. I fancied that the Bible bashing lady might have been on to something, as surely I must have done something wrong to deserve this?! With the end in sight, getting off the train was a great relief!

This was another great ride and it was loverly to see familiar faces and new ones. Many thanks yet again to David for organising and leading another great ride. Saturday was certainly an eventful day and I hope to go on another adventure next week that will involve a few hills.