Being free on Saturday morning I put it out that I was going to go on a Brompton photo ride. I was going to be a case of meet at Trafalgar Square, head out east hugging the river Thames towards the O2, take photos along route and return to central London.

Thankfully, I didn't have to navigate as I was joined by David and a select band that included Anne, Jenny, James and later Samantha. When I set off it was actually spitting with rain but the forecast had predicted correctly that it was going to be a dry, crips and bight day. 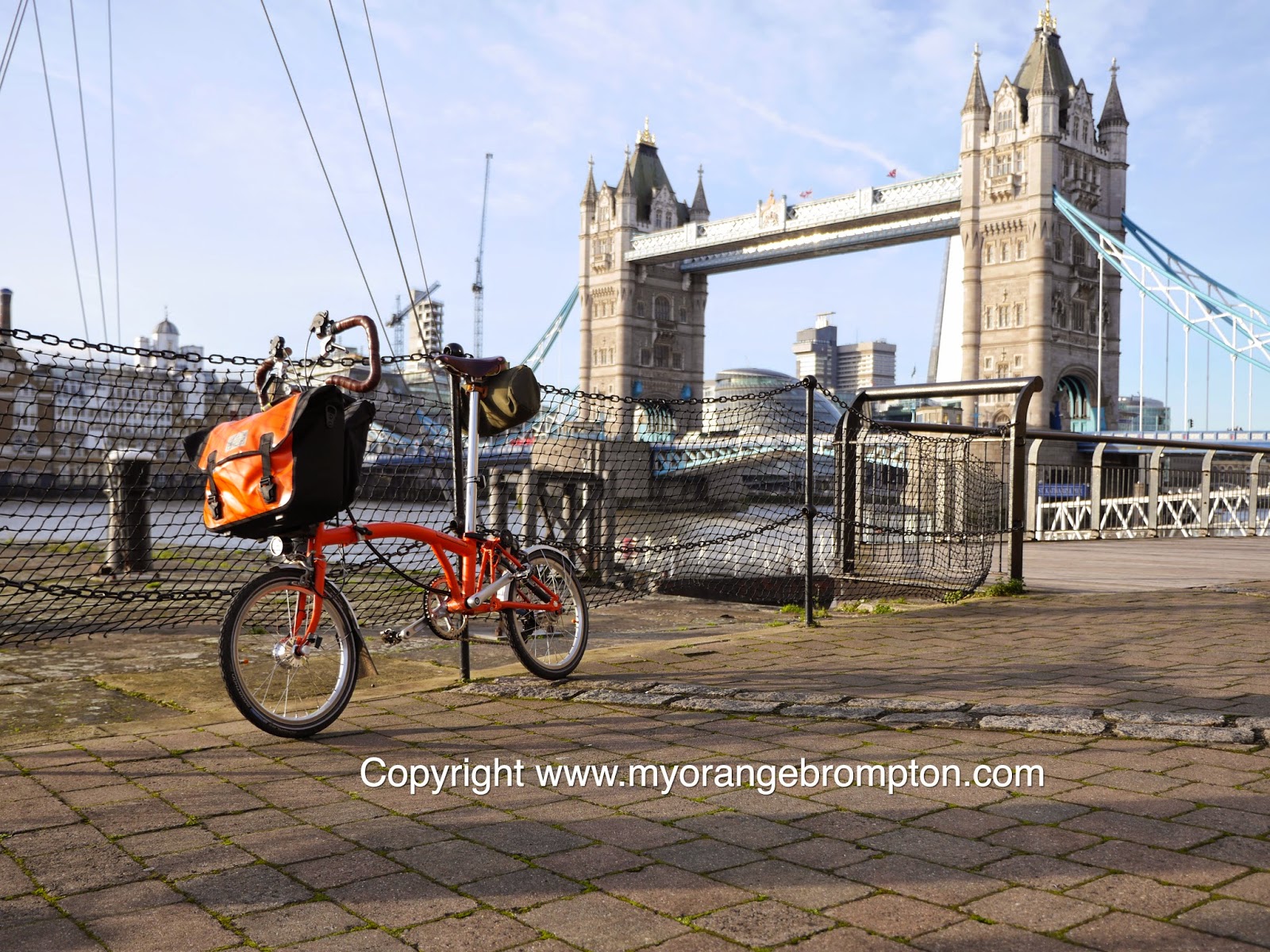 I reached Trafalgar Square in good time and although early I could hear people shouting and sort of singing. Being a curious sort I ventured closer to have a look. I haven't a clue what was going on but there was a film crew and a crowd of people being whipped up into a frenzy by someone with a similar over zealous enthusiasm to Keith Chegwin in his prime. Without a clue what was going on I retired to the nearby fountains to take arty shots of water.

I didn't have to wait too long for the troops to start arriving and after a brief chat we headed off. The roads were fairly quiet at this time of the day - just after 09:00 - which made for more pleasant cycling. 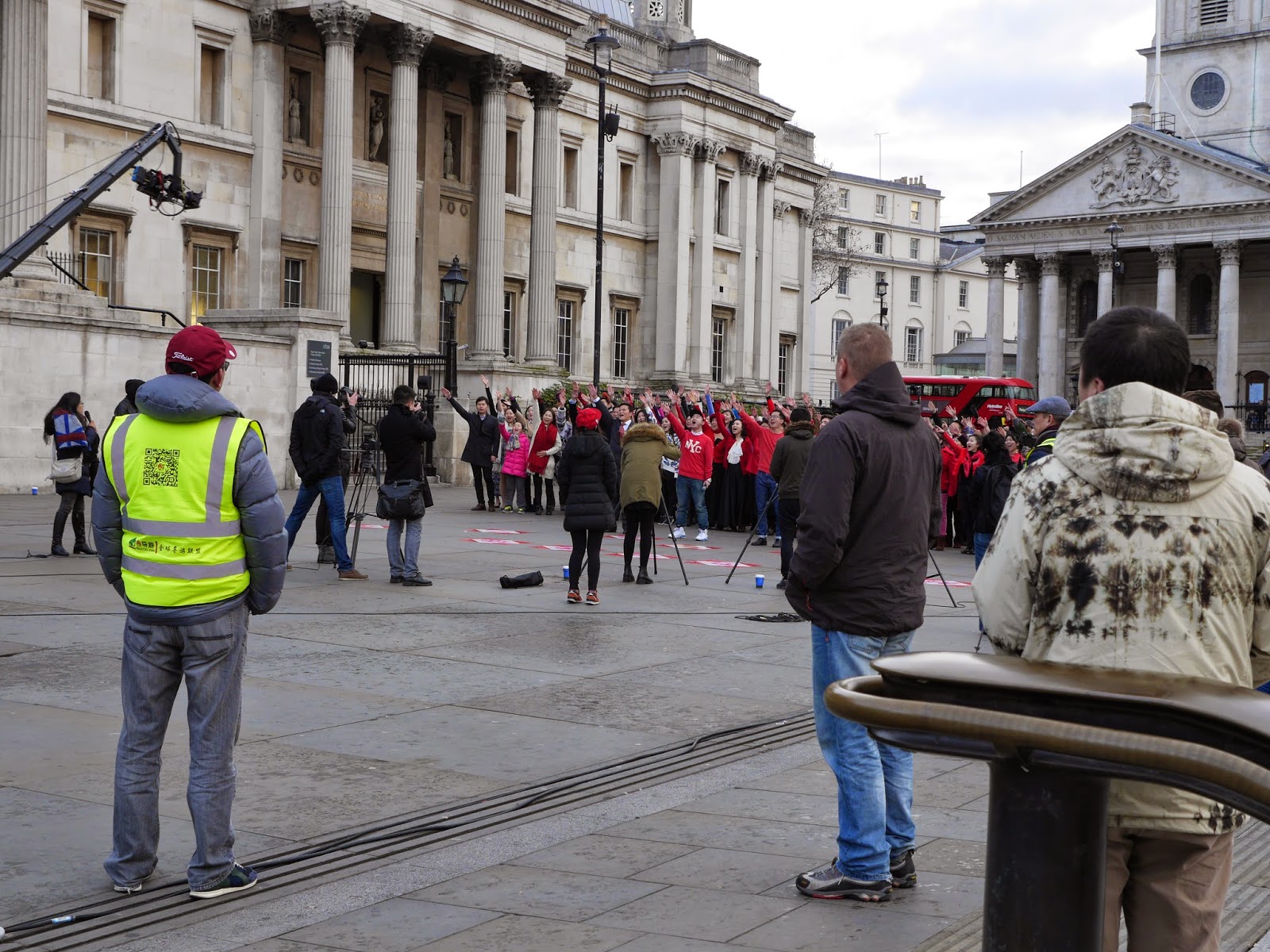 Reaching St Paul's Cathedral we stopped to take a few pictures. There was a Paddington Bear statue which is one of 50 dotted around London. There was also a statue of a London bus and again there are over 50 of these too. I know that my cycling partner, Andrew recently went on the trail to find all of these but sadly their charms were lost of me. 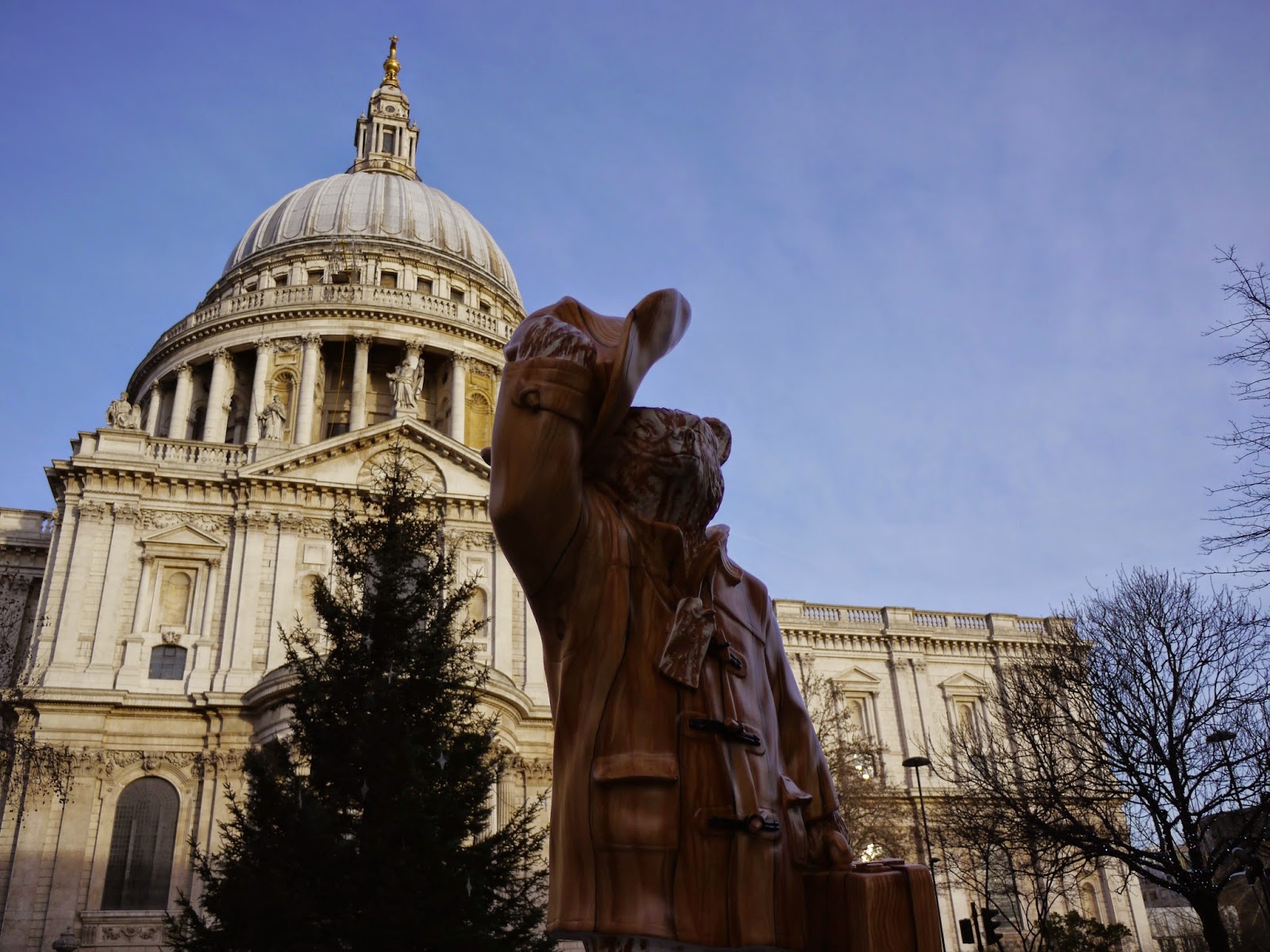 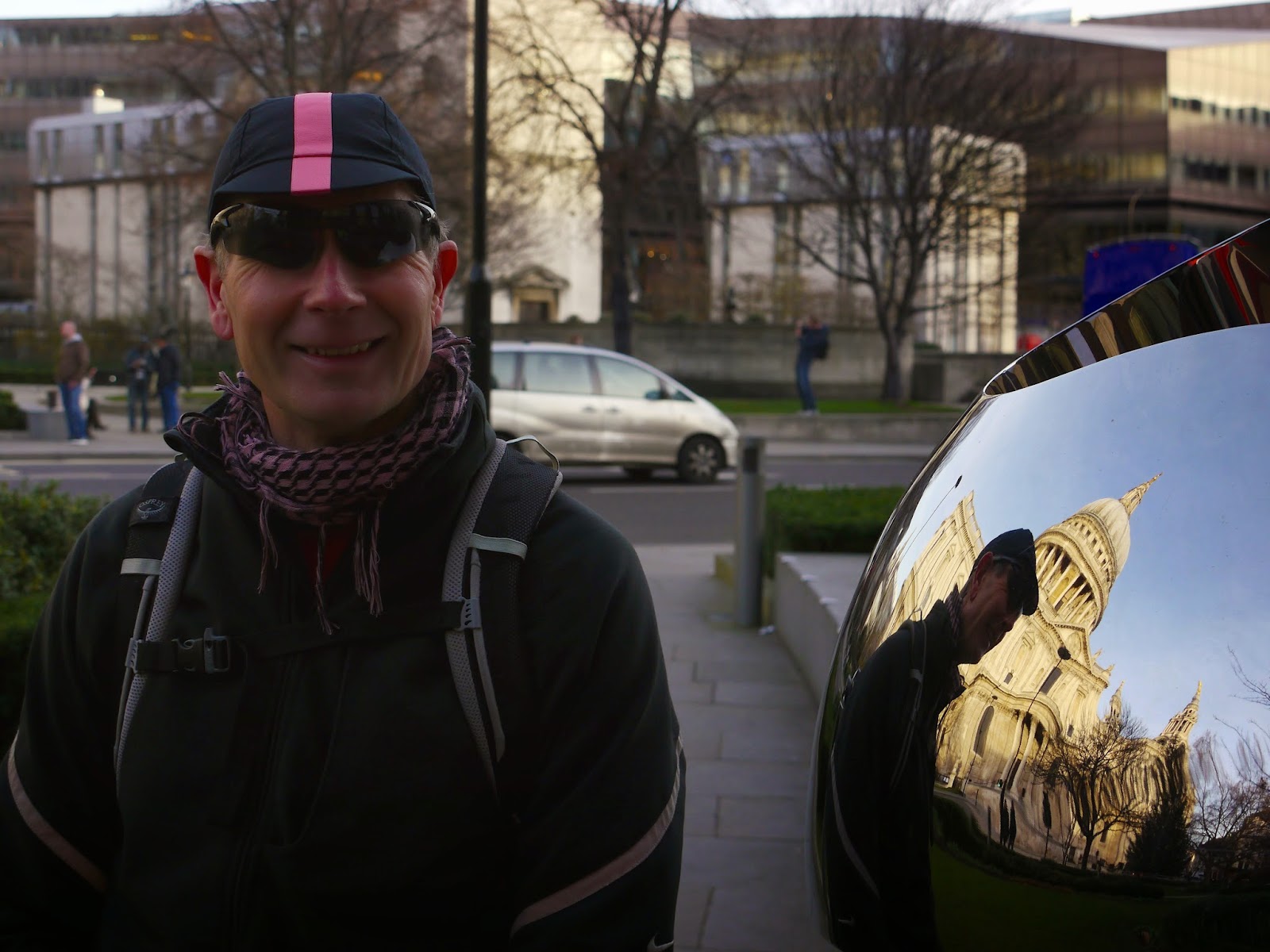 In the bright sun a new star in terms of the London skyline - the Walkie Talkie - looked quite stunning  and appeared to glisten. 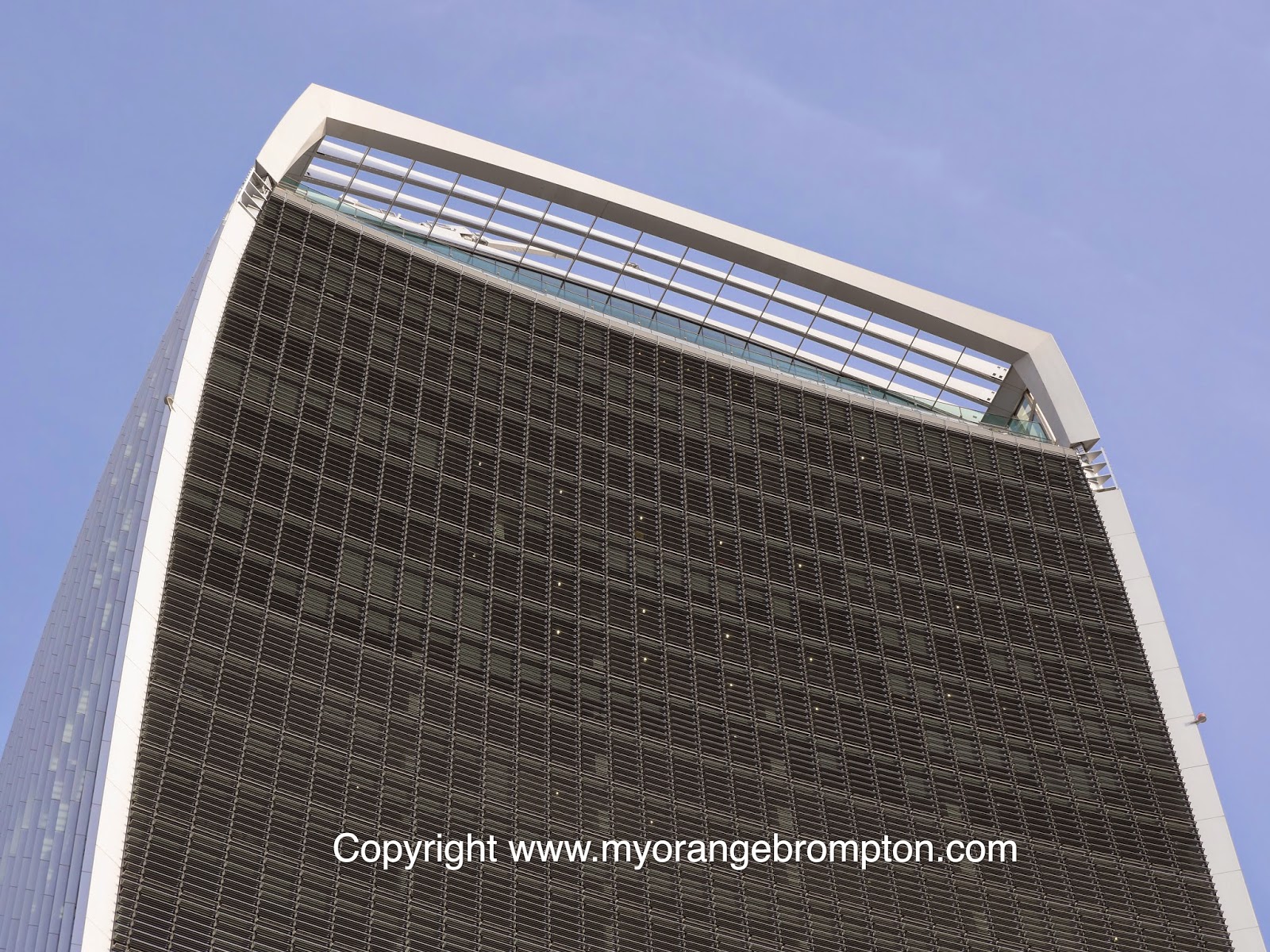 On the north side of the Thames great views were afforded of Tower Bridge. Looking out towards it was illuminated greatly by the sun. Strangely when one glanced the other way the view appeared to be almost that of sunset? 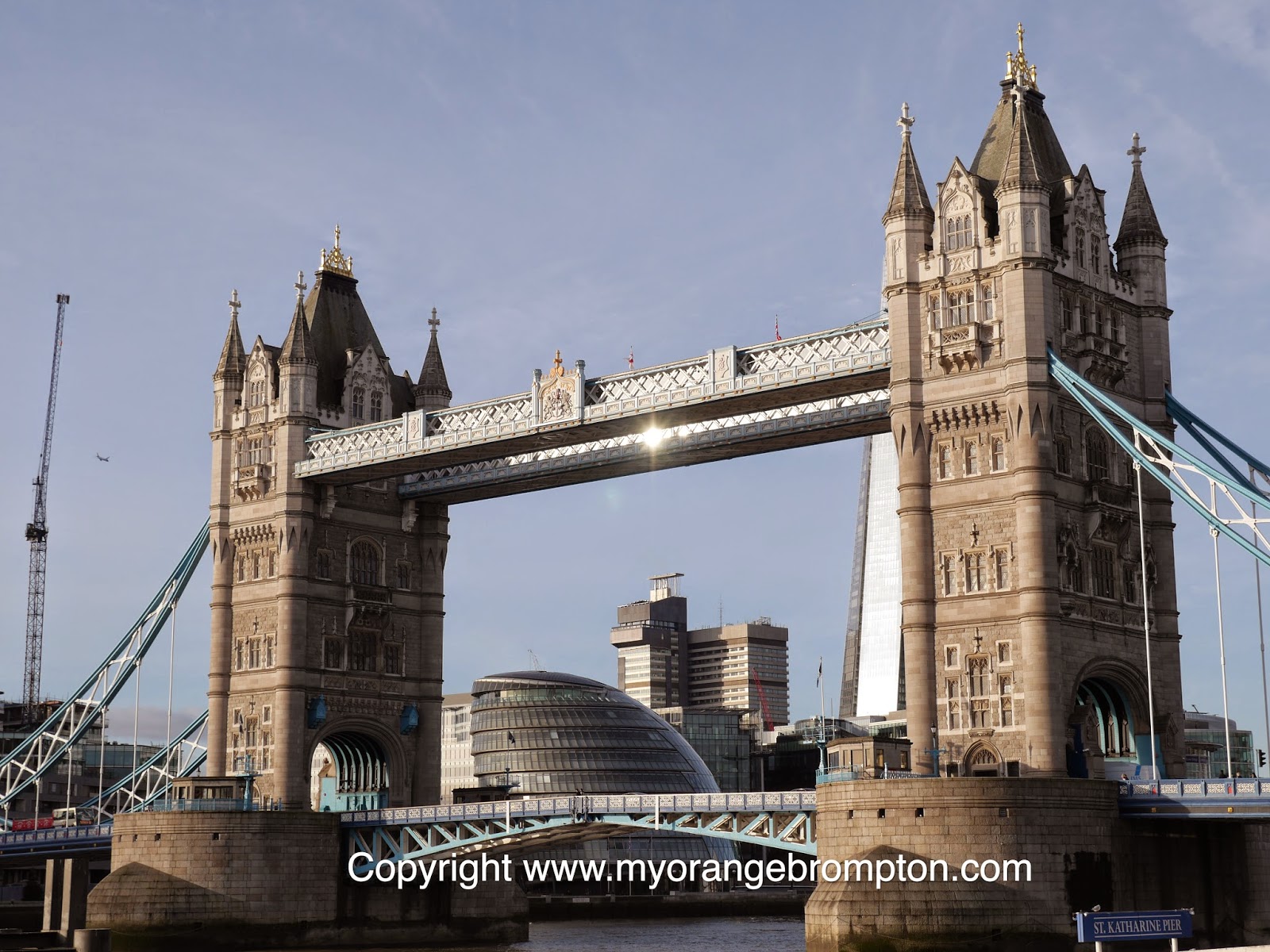 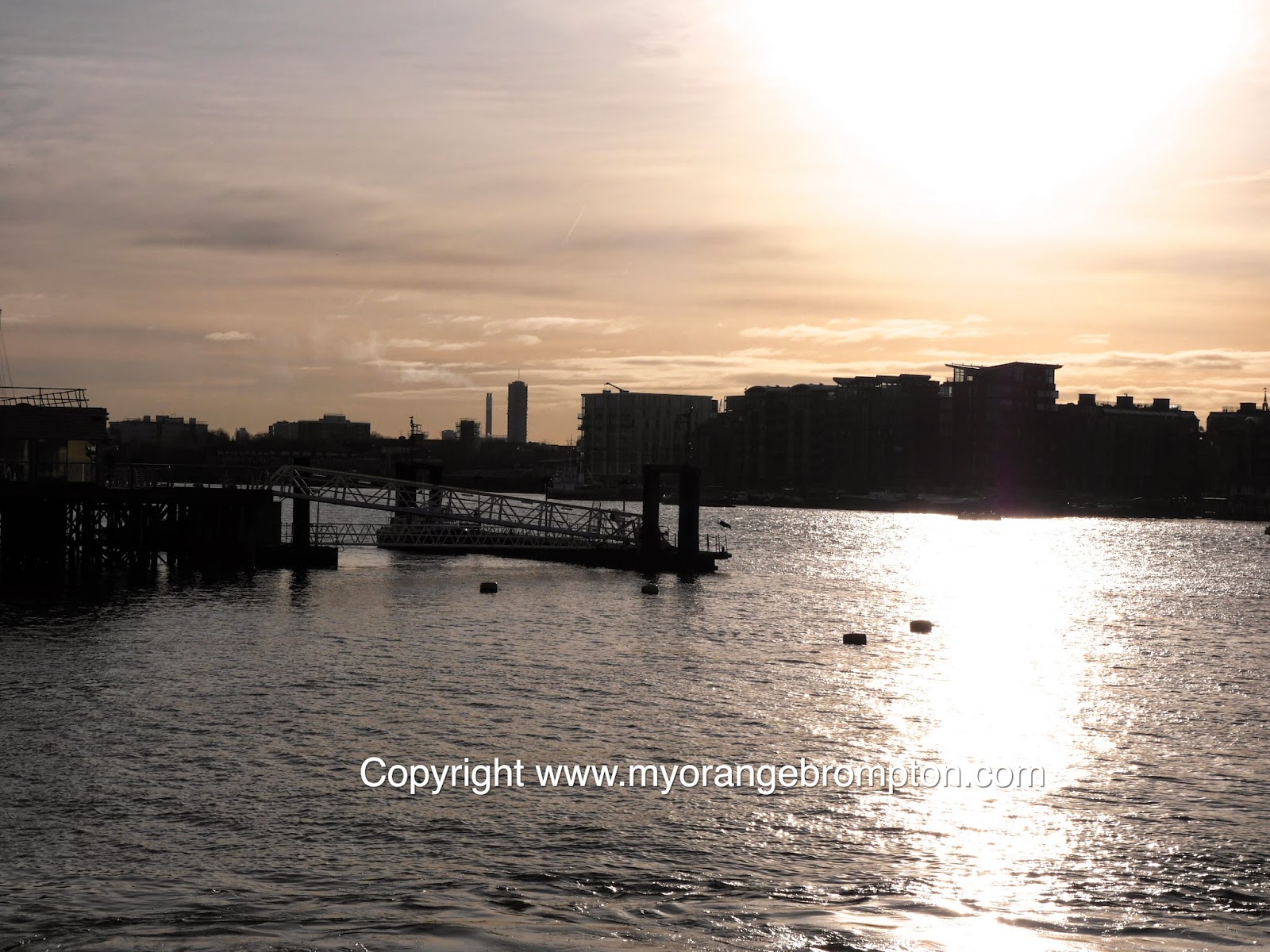 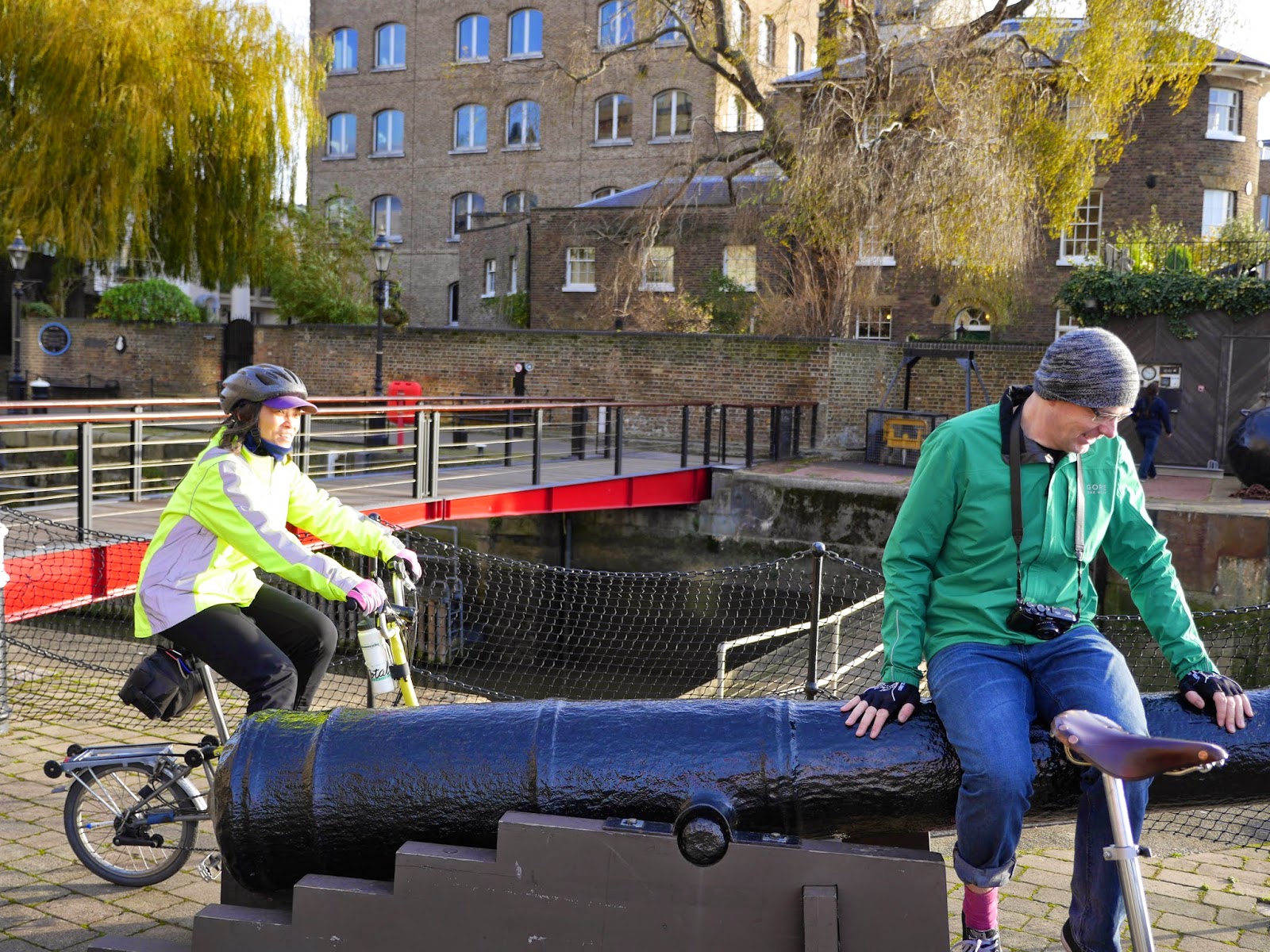 Heading further east, never straying too far from the Thames we passed Wapping and its many narrow streets lined with expensive riverside, urban accommodation. On the whole the developers seem to have done a fairly good job and all looks very tasteful. 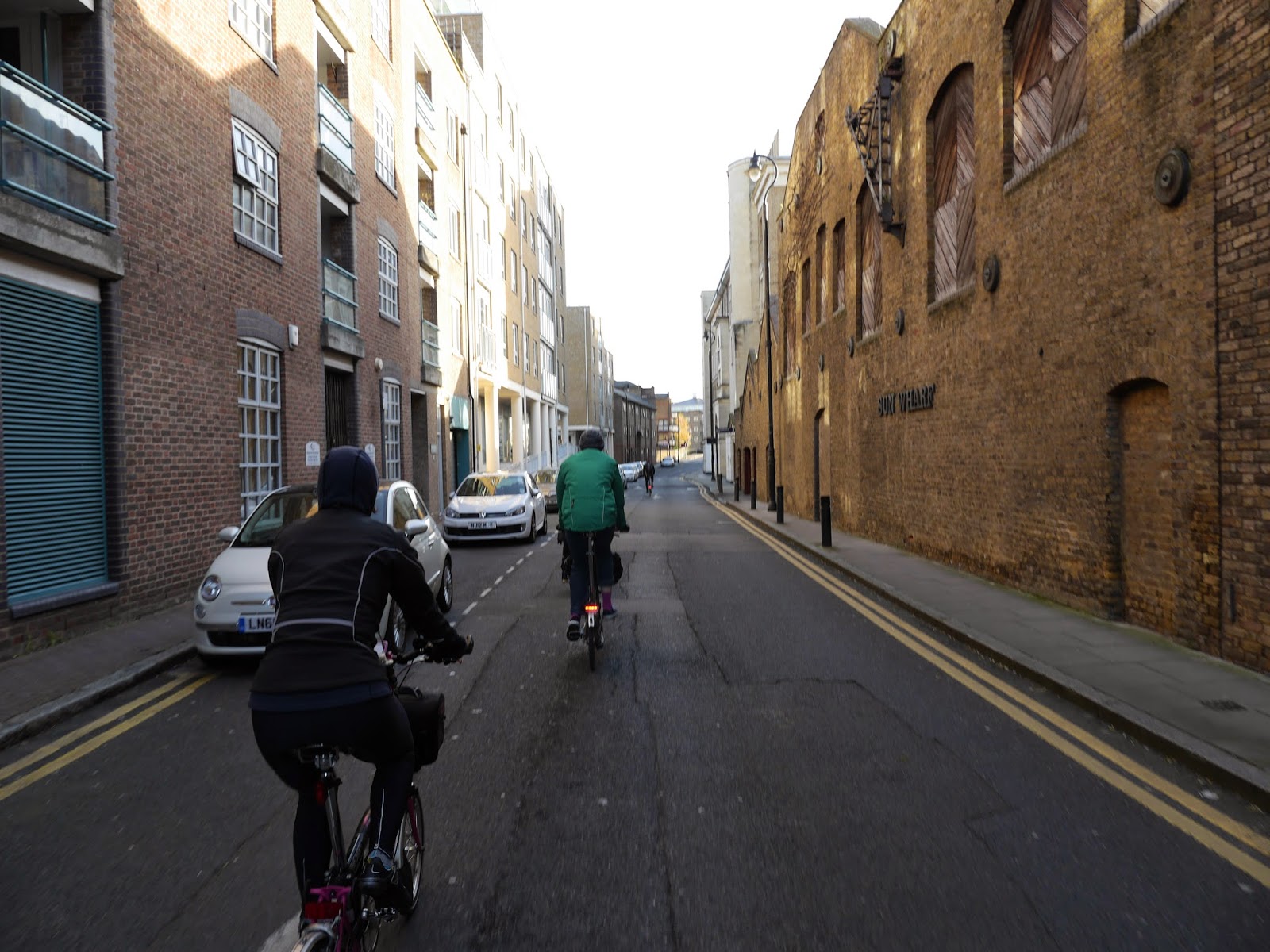 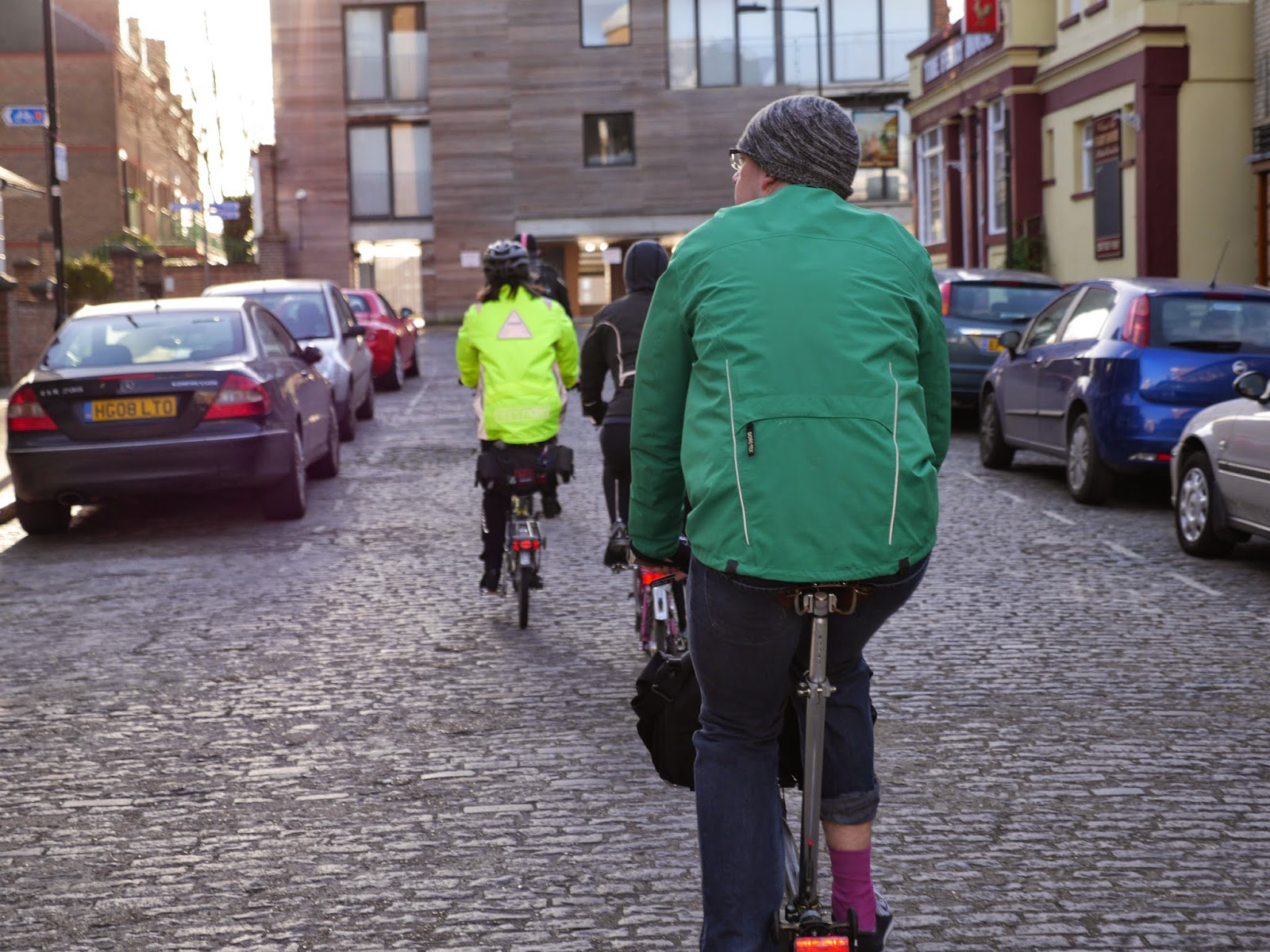 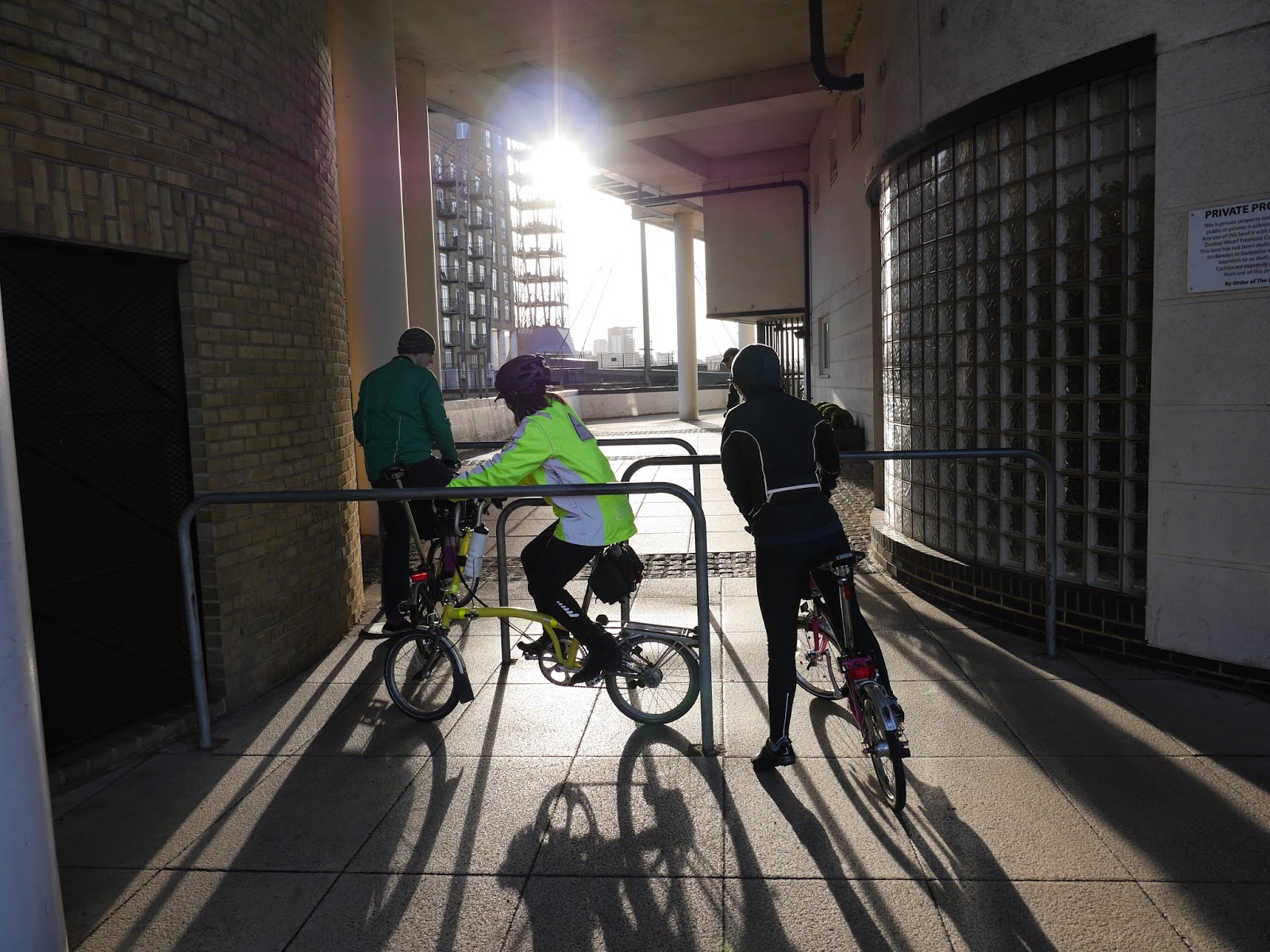 This ride was billed as a photo ride and many of use took copious photos of anything resembling a lovely scene. In the picture below a glance towards the right revealed several people hard at work on some sort of circuit training. This looked ridiculous to my eyes and if they were paying even more so. There were two people doing low steps, one doing squat thrusts and several others lifting heavyish objects above their heads and then placing them on the ground. My initial thoughts were money for old rope and then I thought, surely you'd have more fun and burn off more calories on a Brompton?! 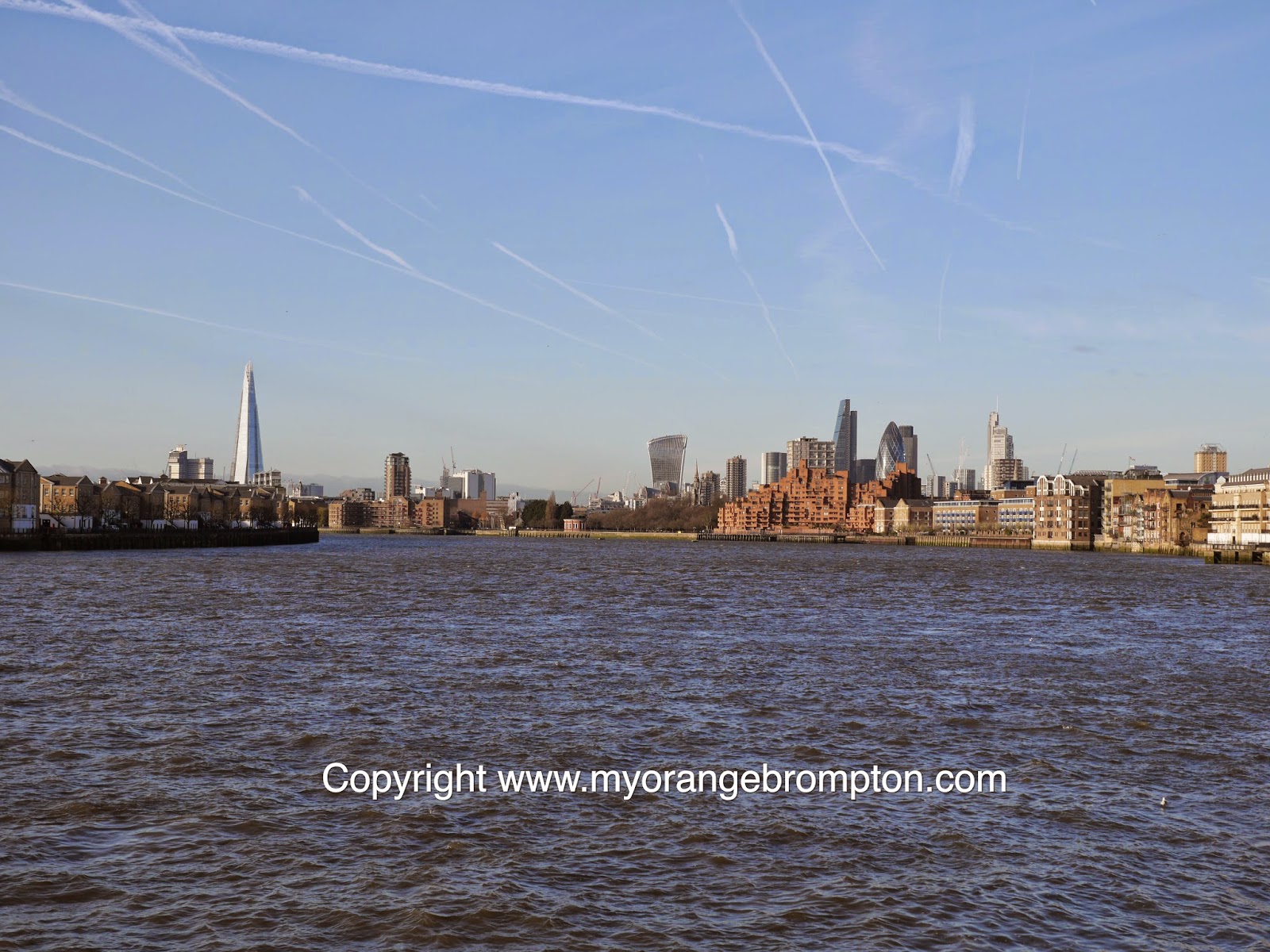 Reaching Canary Wharf we took a little more time than usual to take the odd photo. 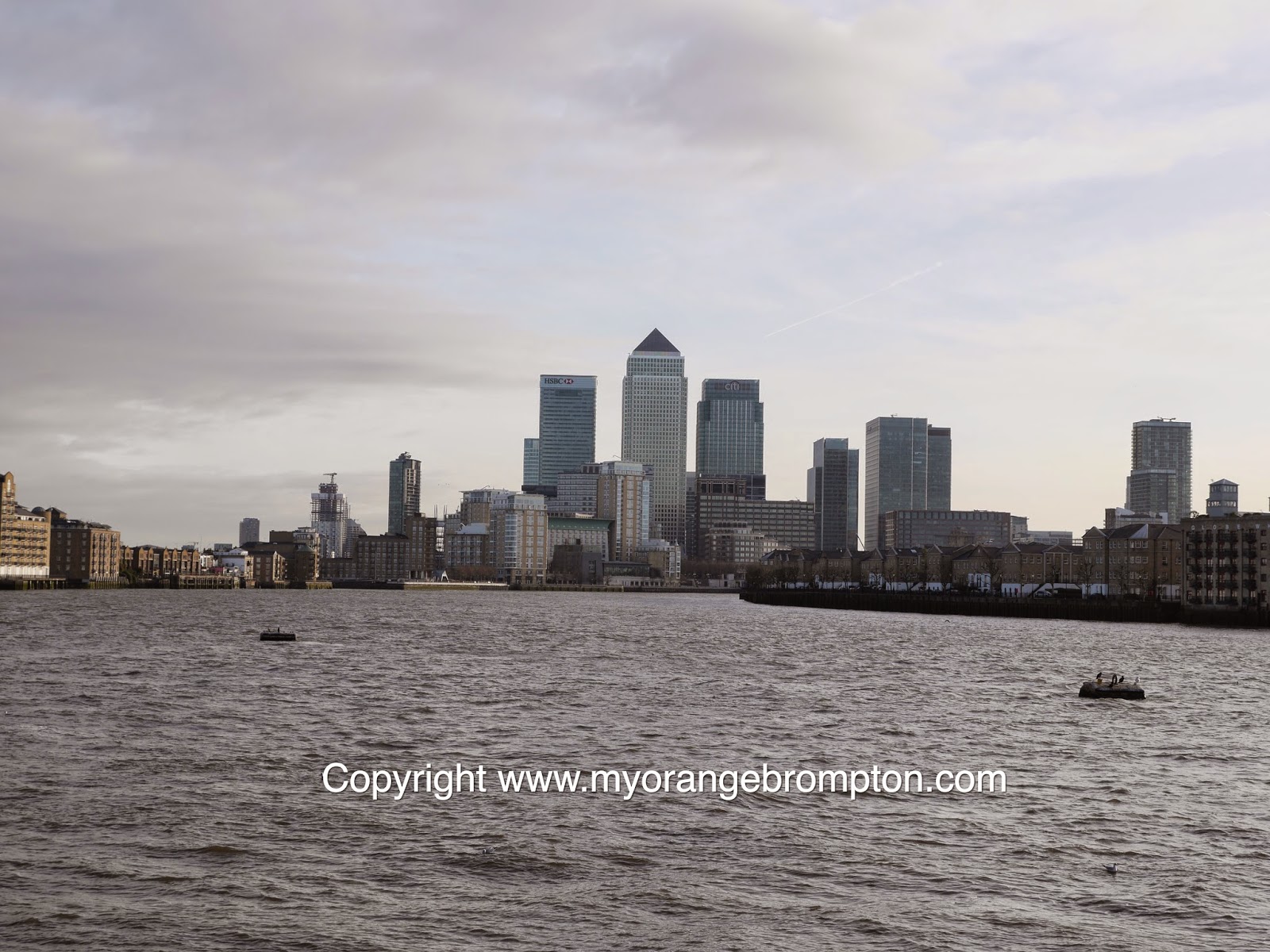 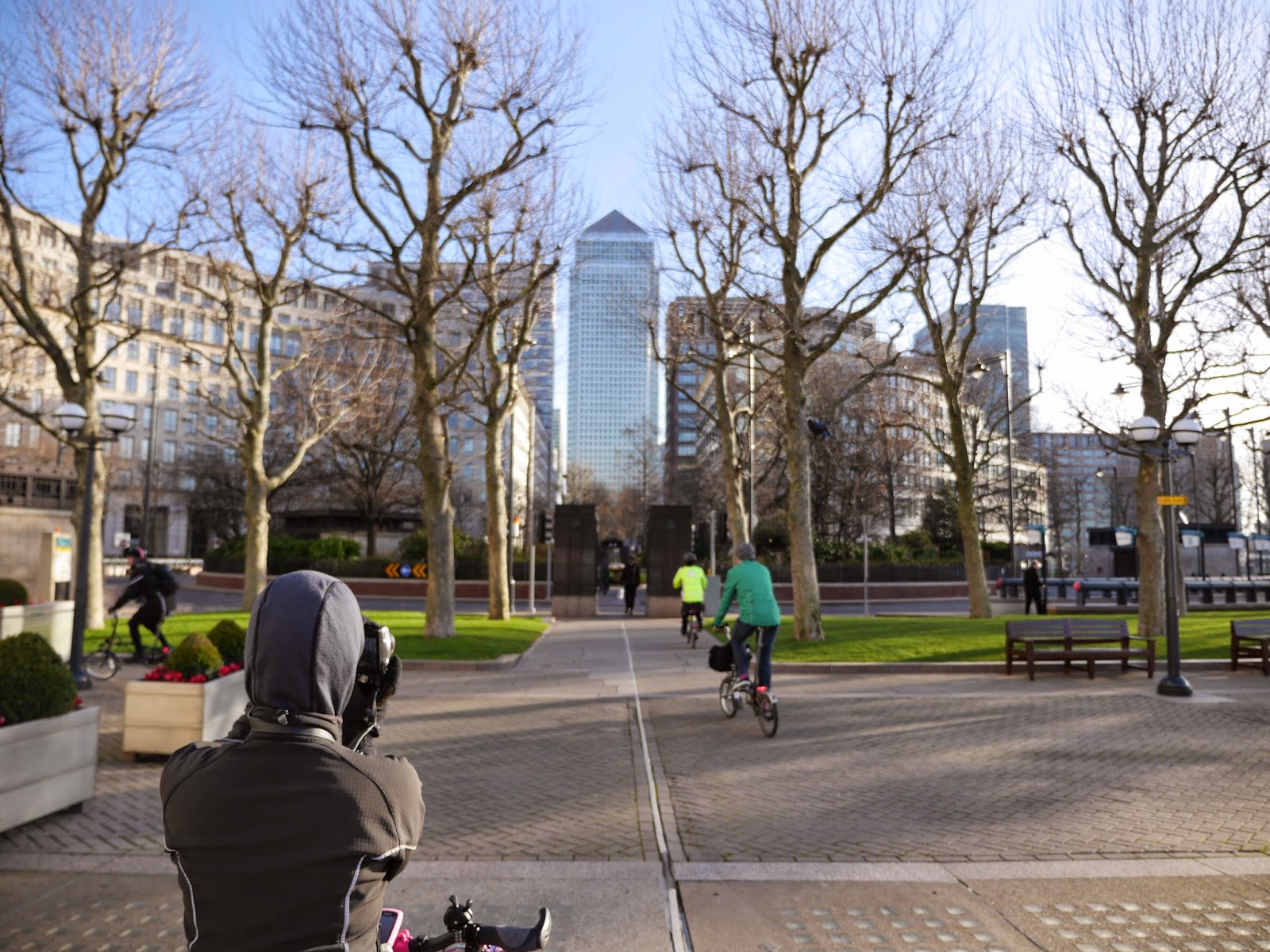 While composing the photograph below, Jenny was content to ride round the circular fountain having great fun. 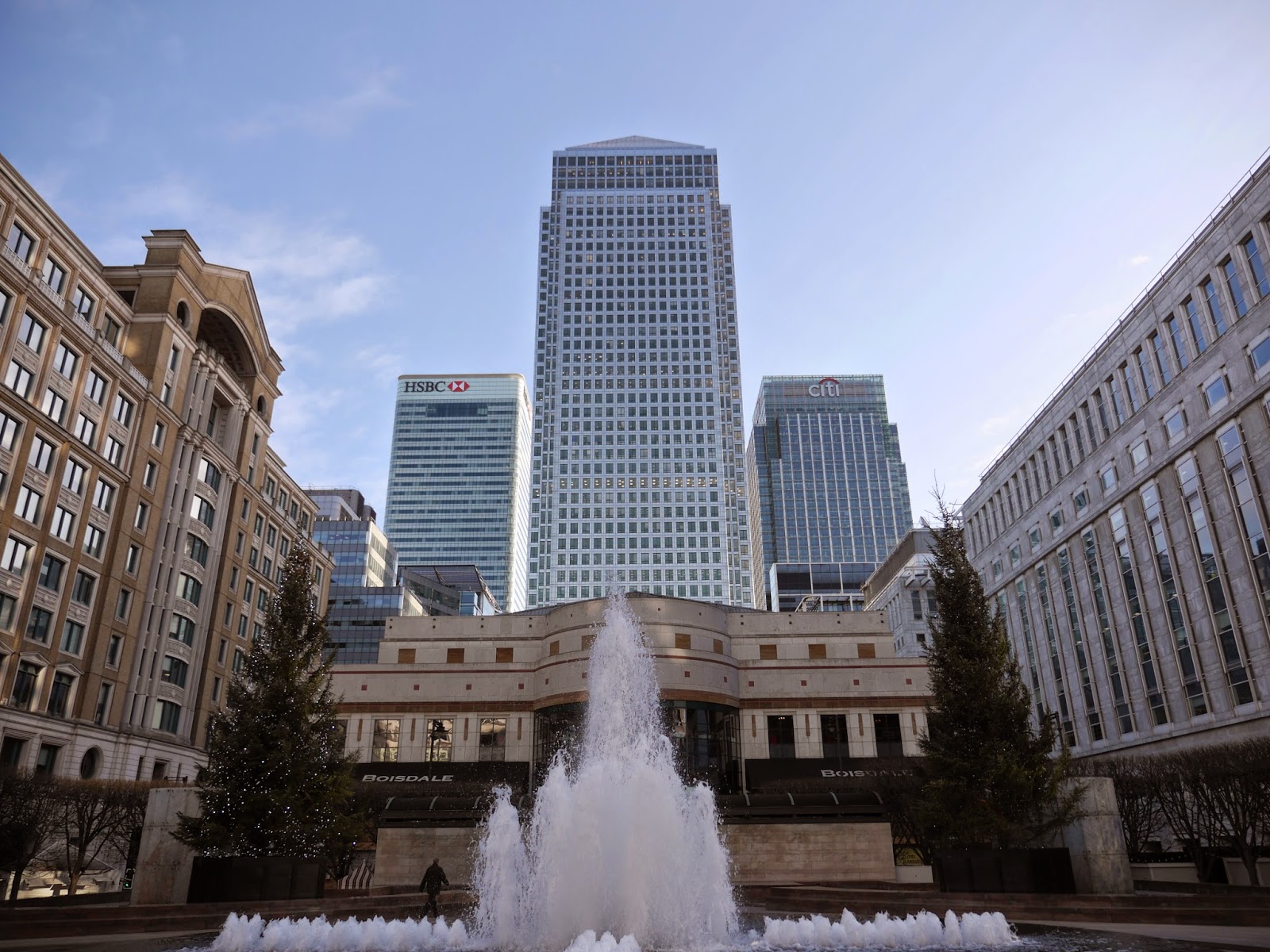 Again I was left with the feeling that I might venture back to Canary Wharf to take some more photos at some point. 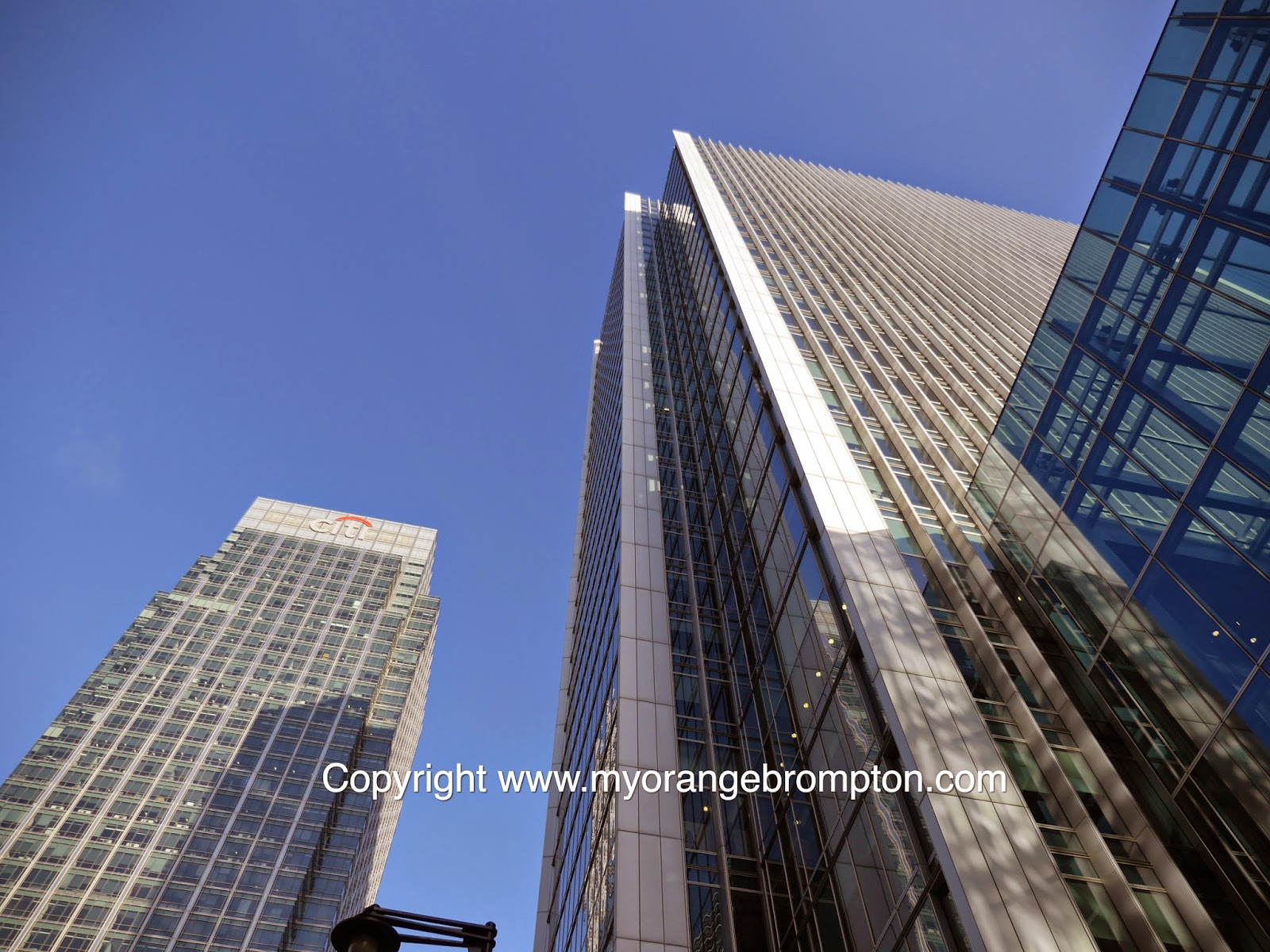 Going under the foot tunnel at Greenwich we were greeted by Samantha who had joined us there. 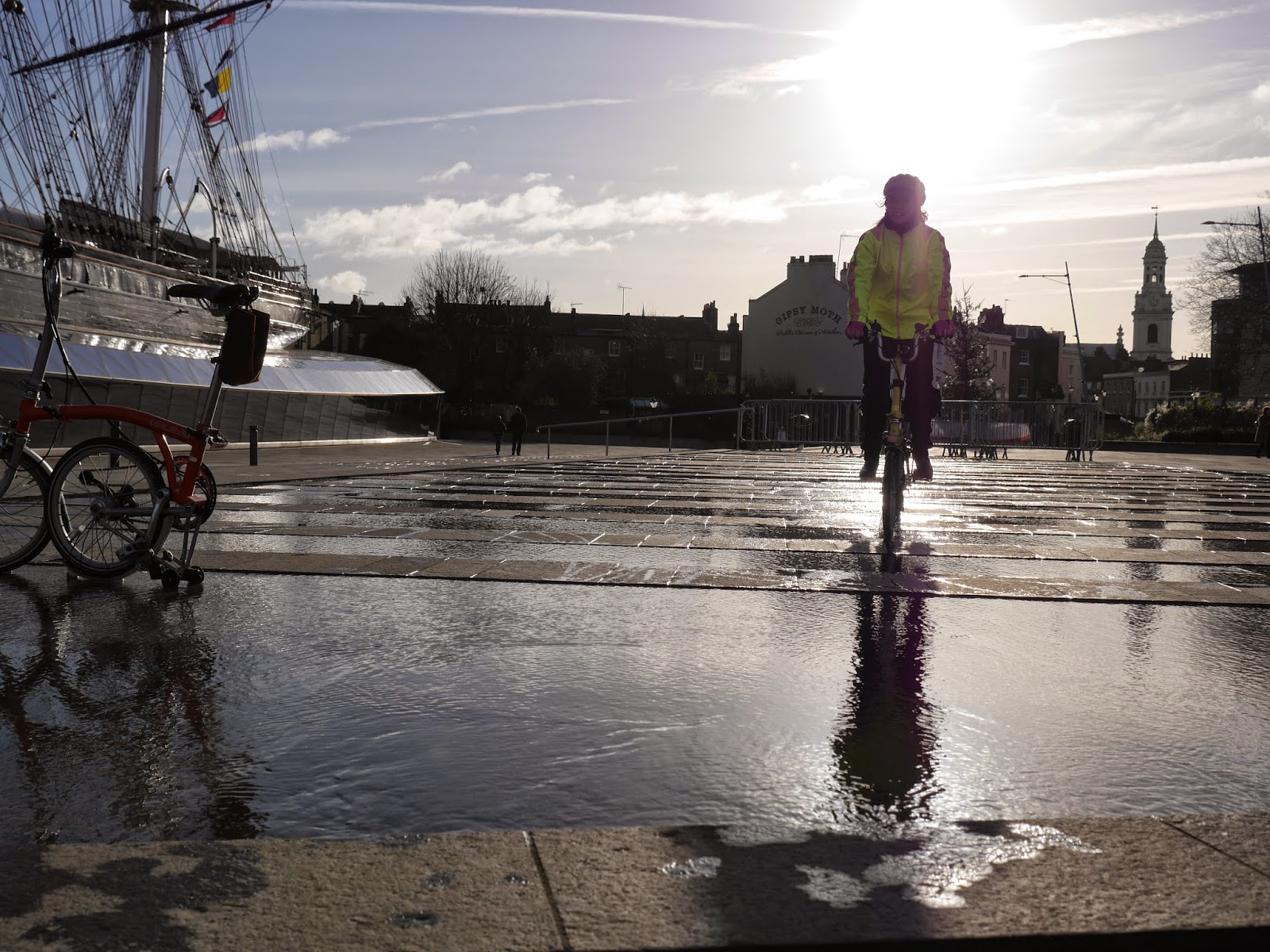 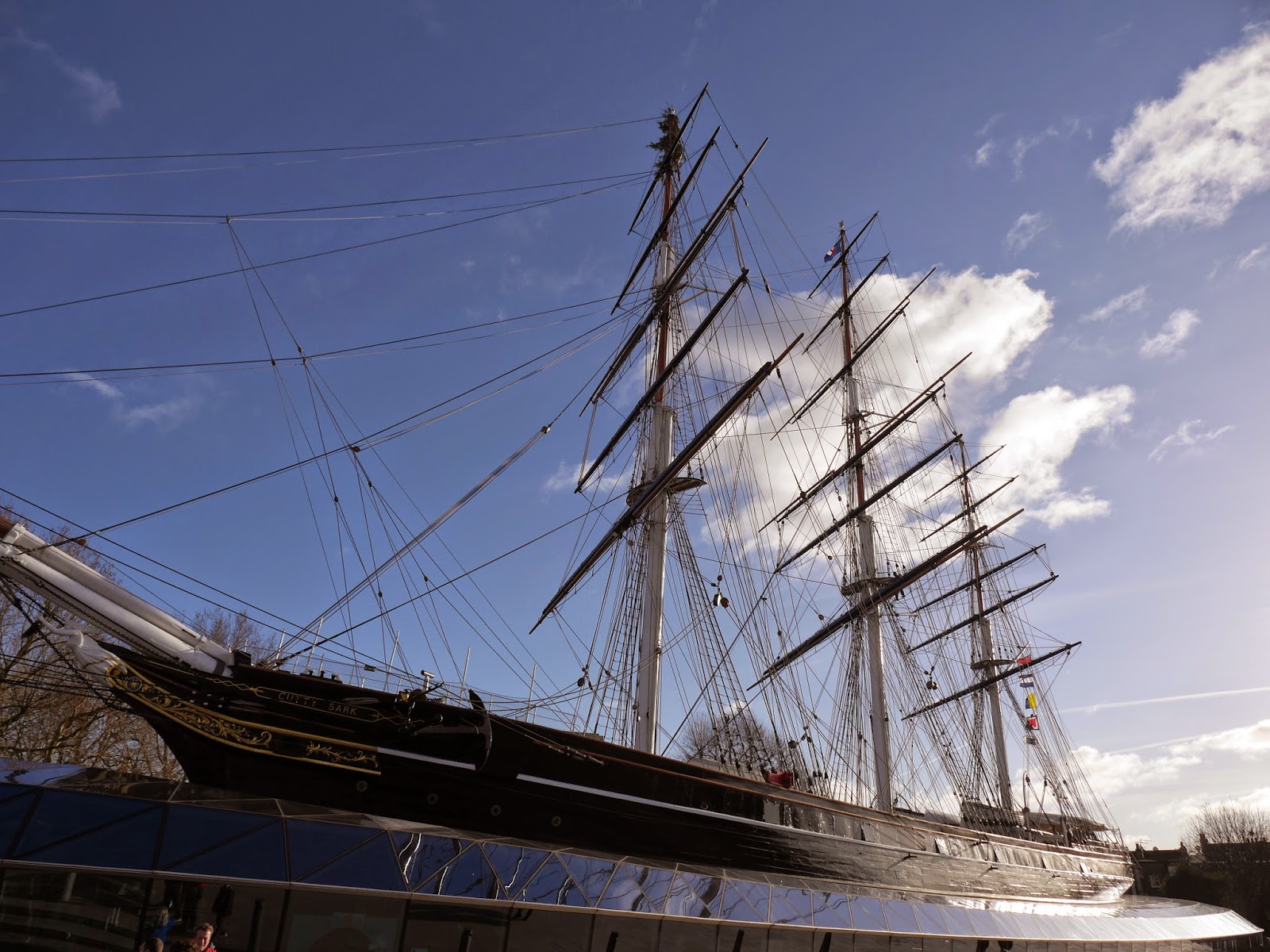 Greenwich is a lovely location and the great thing about its riverfront location is that you can travel there via the Thames Clipper service from central London. This return journey in itself is most enjoyable, taking the sights but there is some stunning architecture to be seen when at Greenwich. 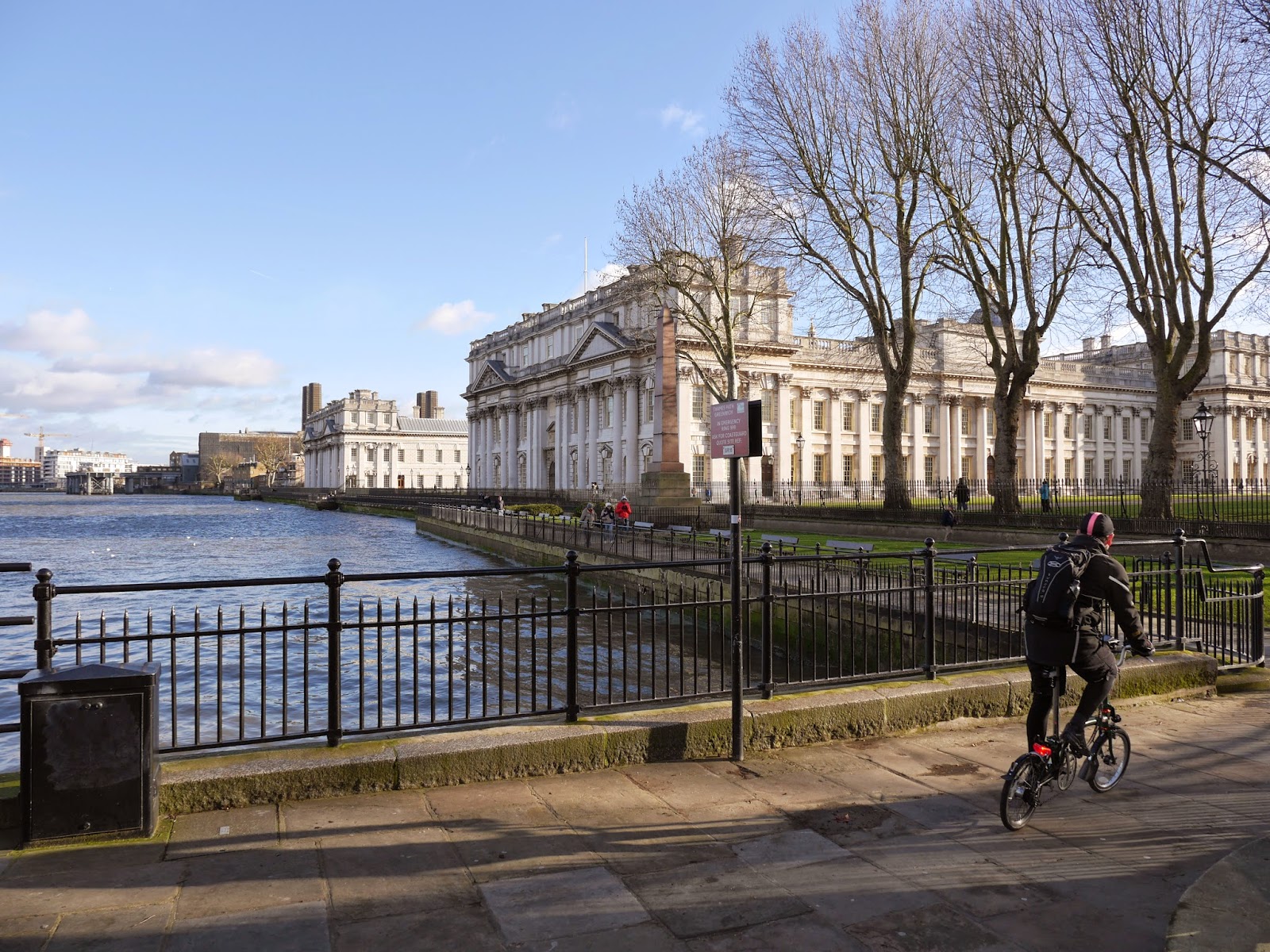 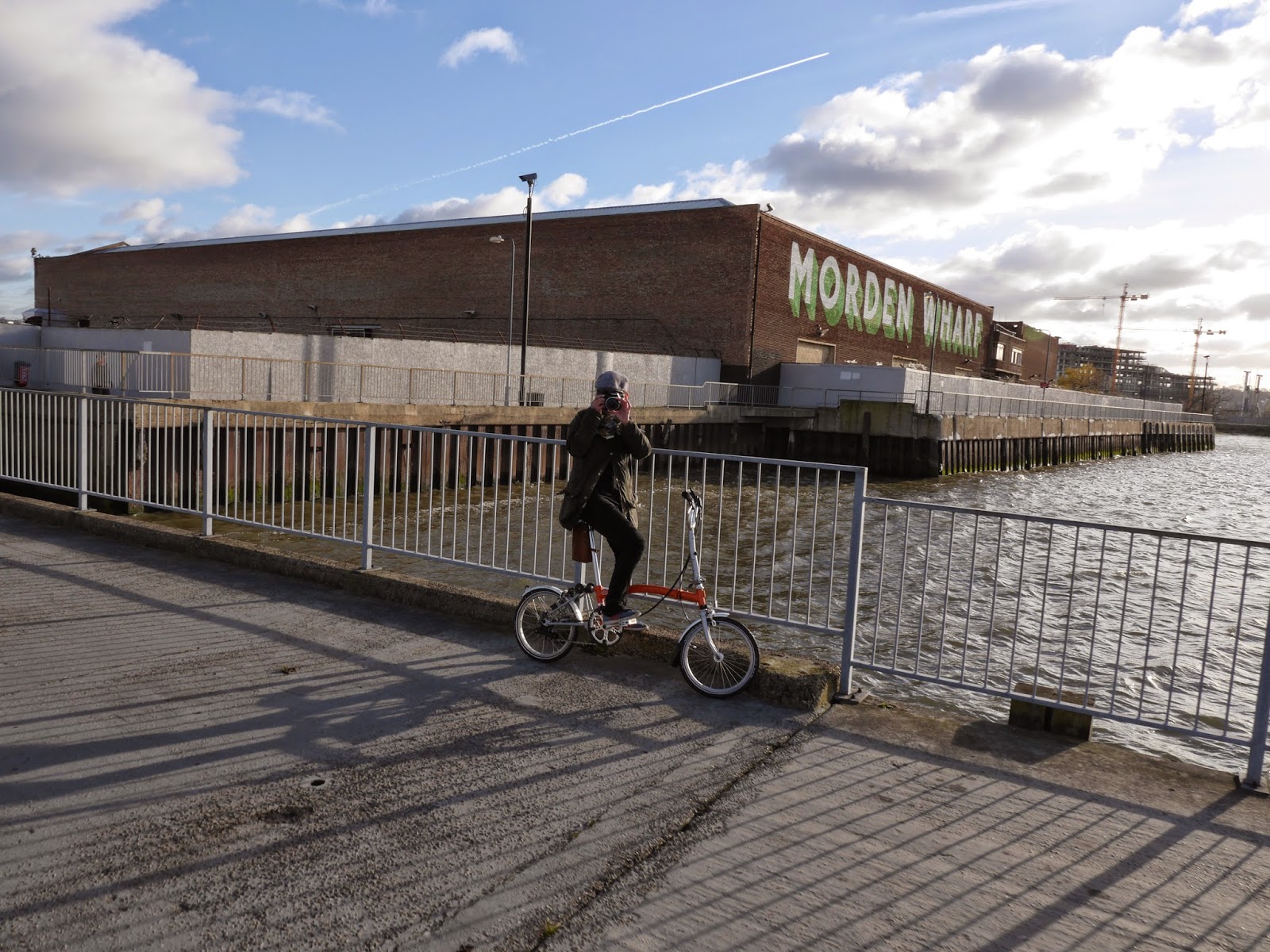 Heading further east we entered riverside developments that are still being developed. Having cycled along here at various times over the past three years, I have seen a steady change in this part of London. Cormorants, an almost prehistoric looking bird, sat happily on an old mooring drying their wings. 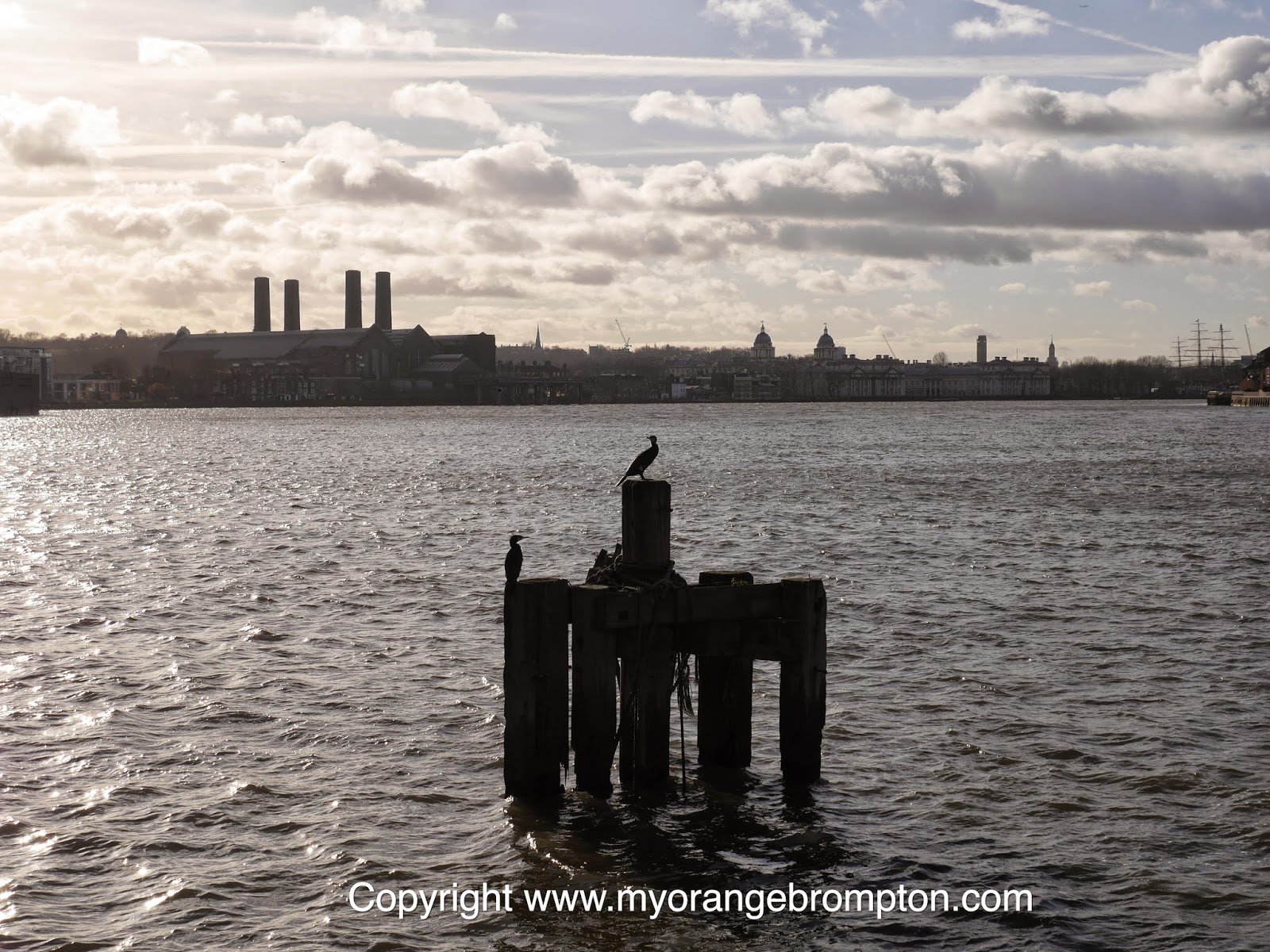 There was a small stretch of our path blocked by a mini lake of water. This did not deter anyone but yours truly. I had no intentions of letting my Brompton get too dirty, so long as I could find a safe and  suitable alternative. 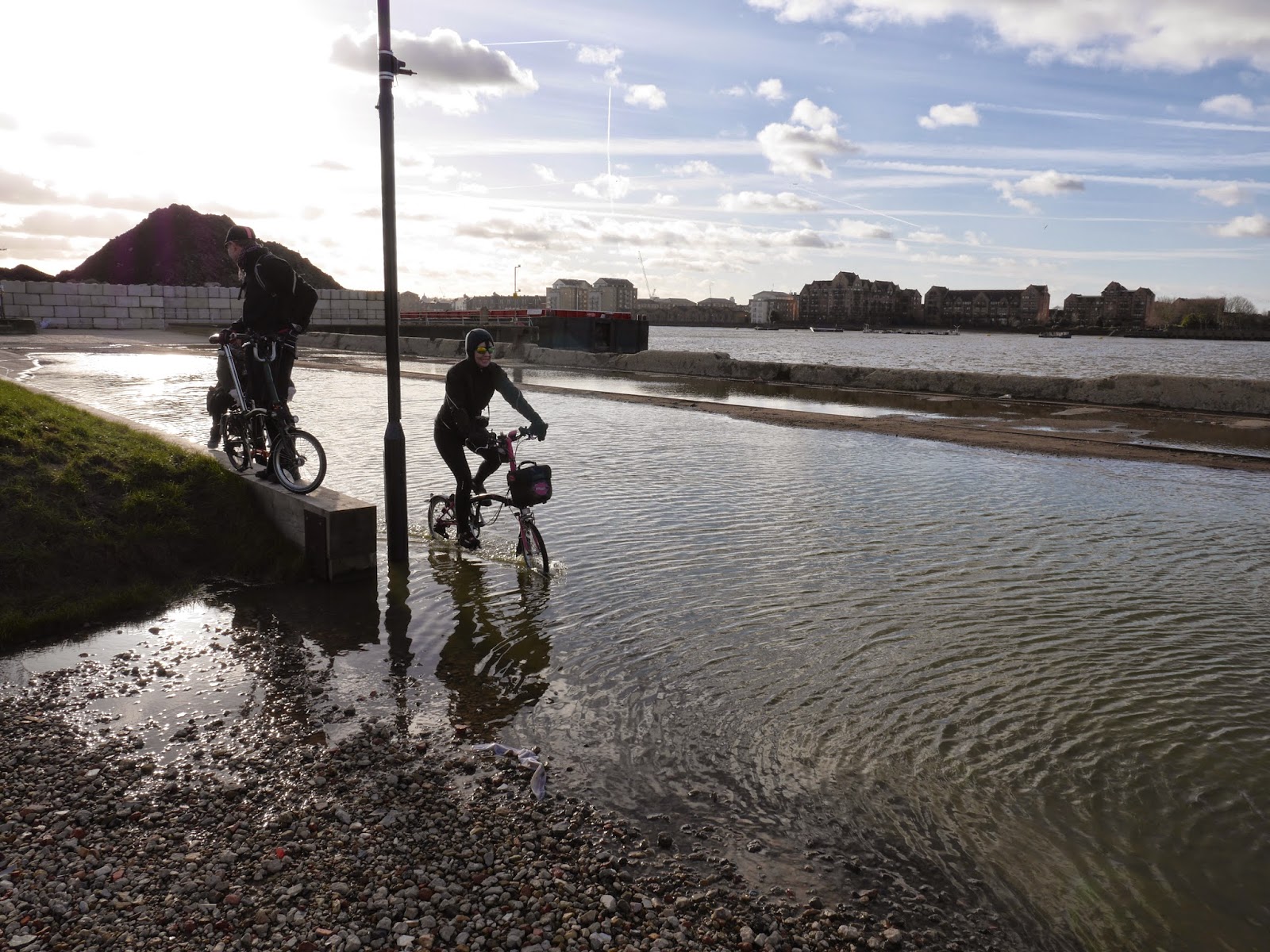 James decided to ford the water on a mini causeway that reminded me of Blakeney Point. I opted for higher ground and walked along the embankment to the right of the picture below. 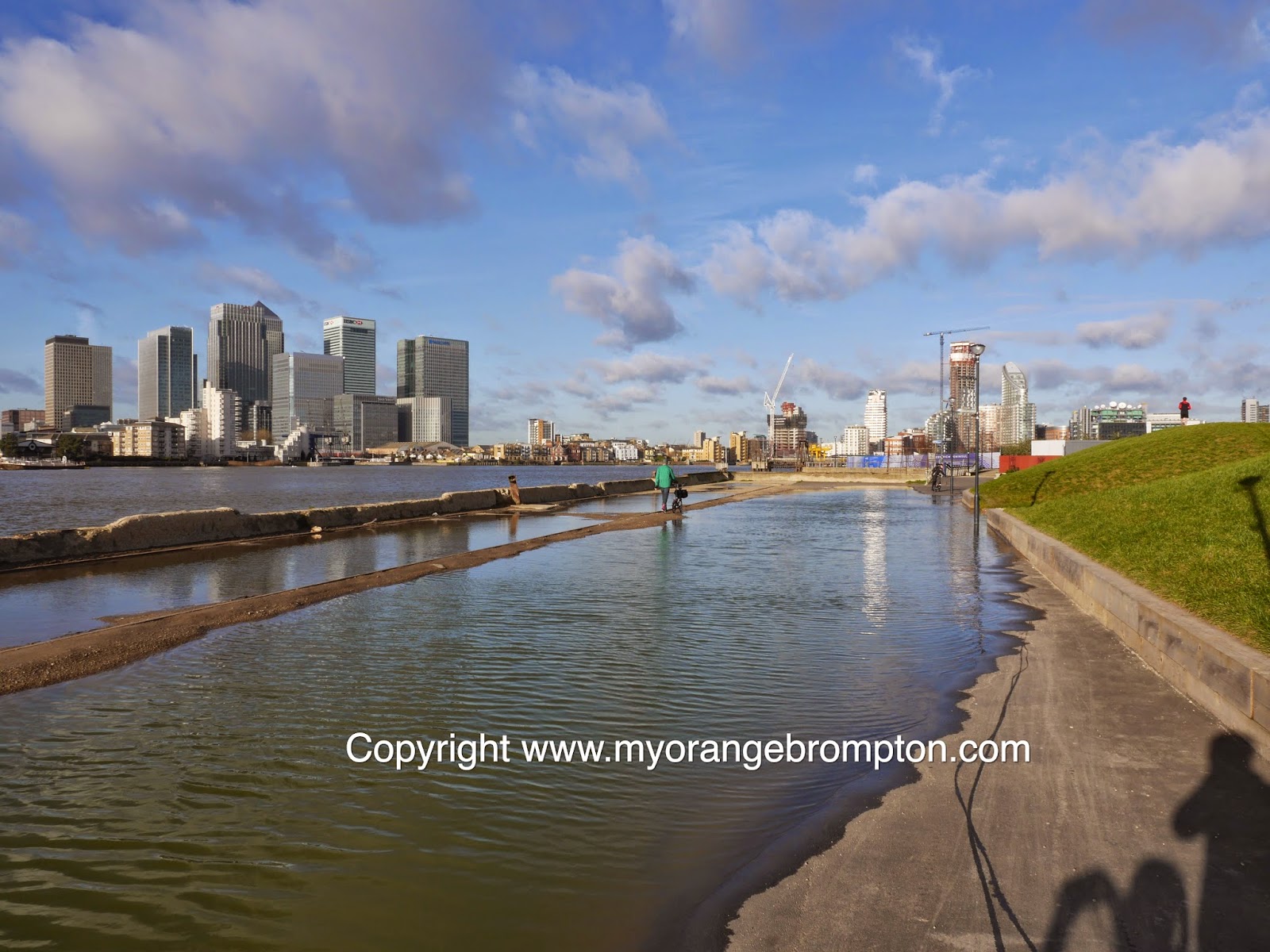 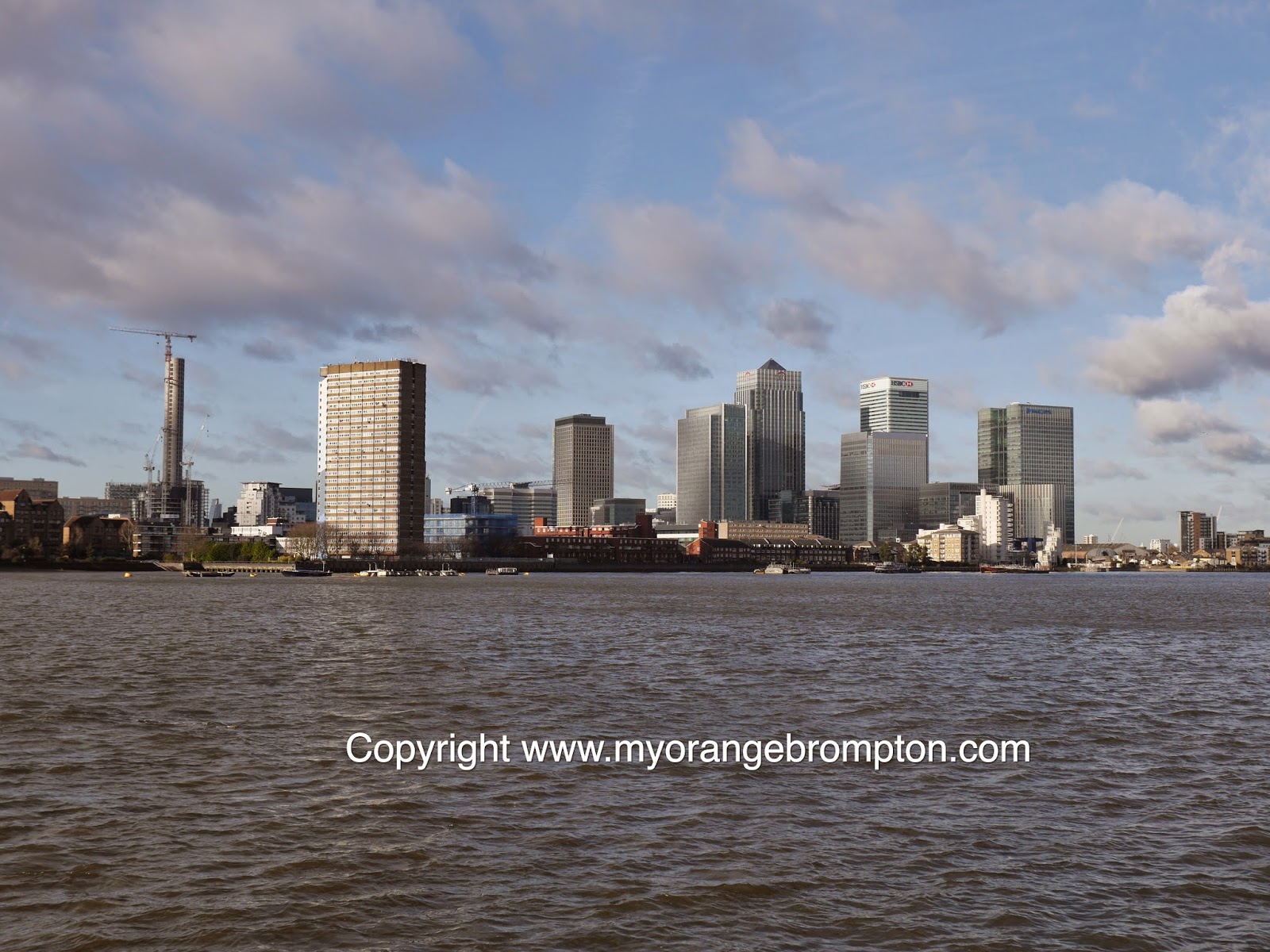 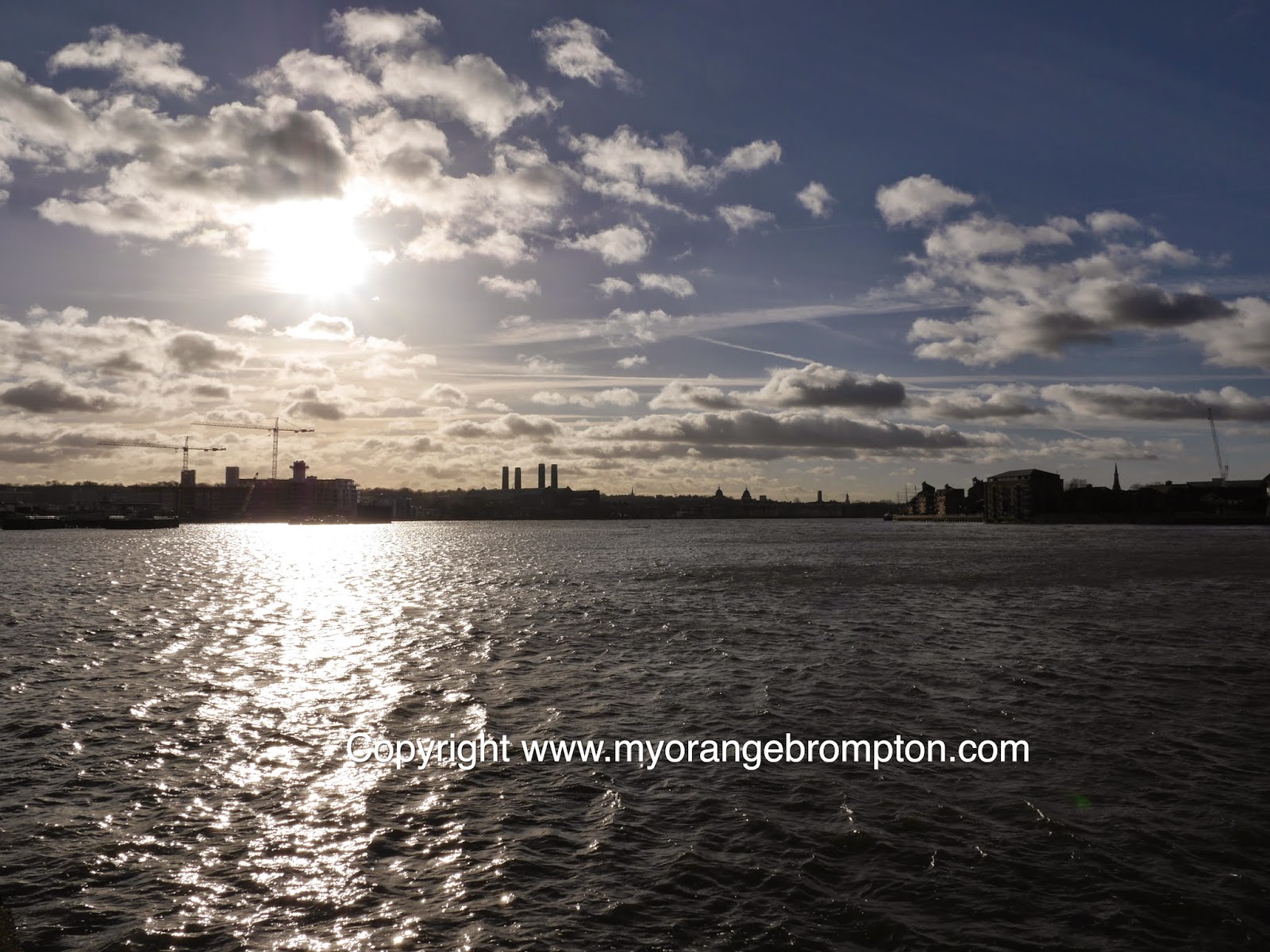 At the O2 the Emirates Skyline carriages - well worth a visit - glided overhead. Sadly, there has been talk in the media that due to the number of people using it on a regular basis, it might not survive in this location and there was speculation that it could even be moved. This would be a shame. 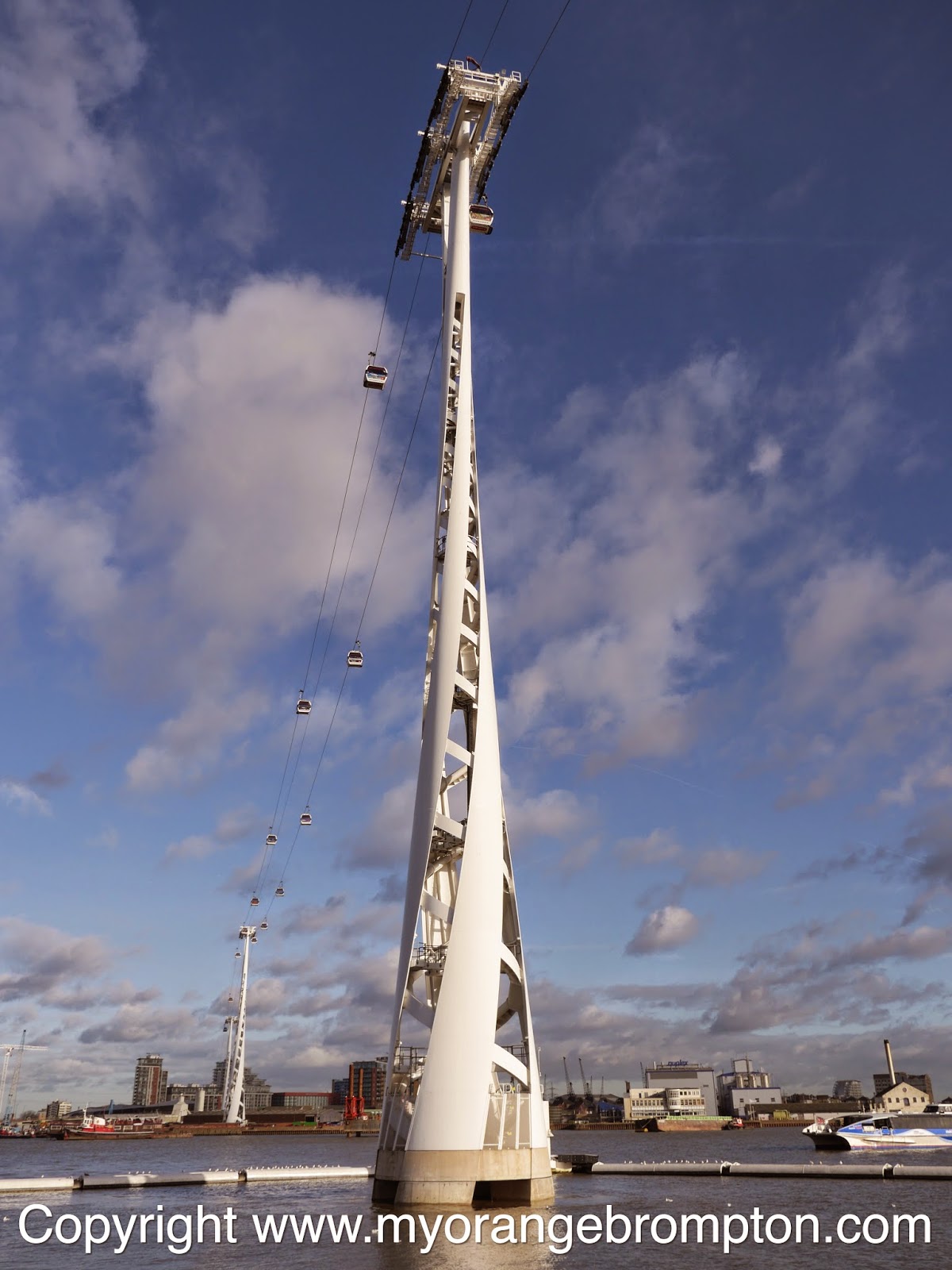 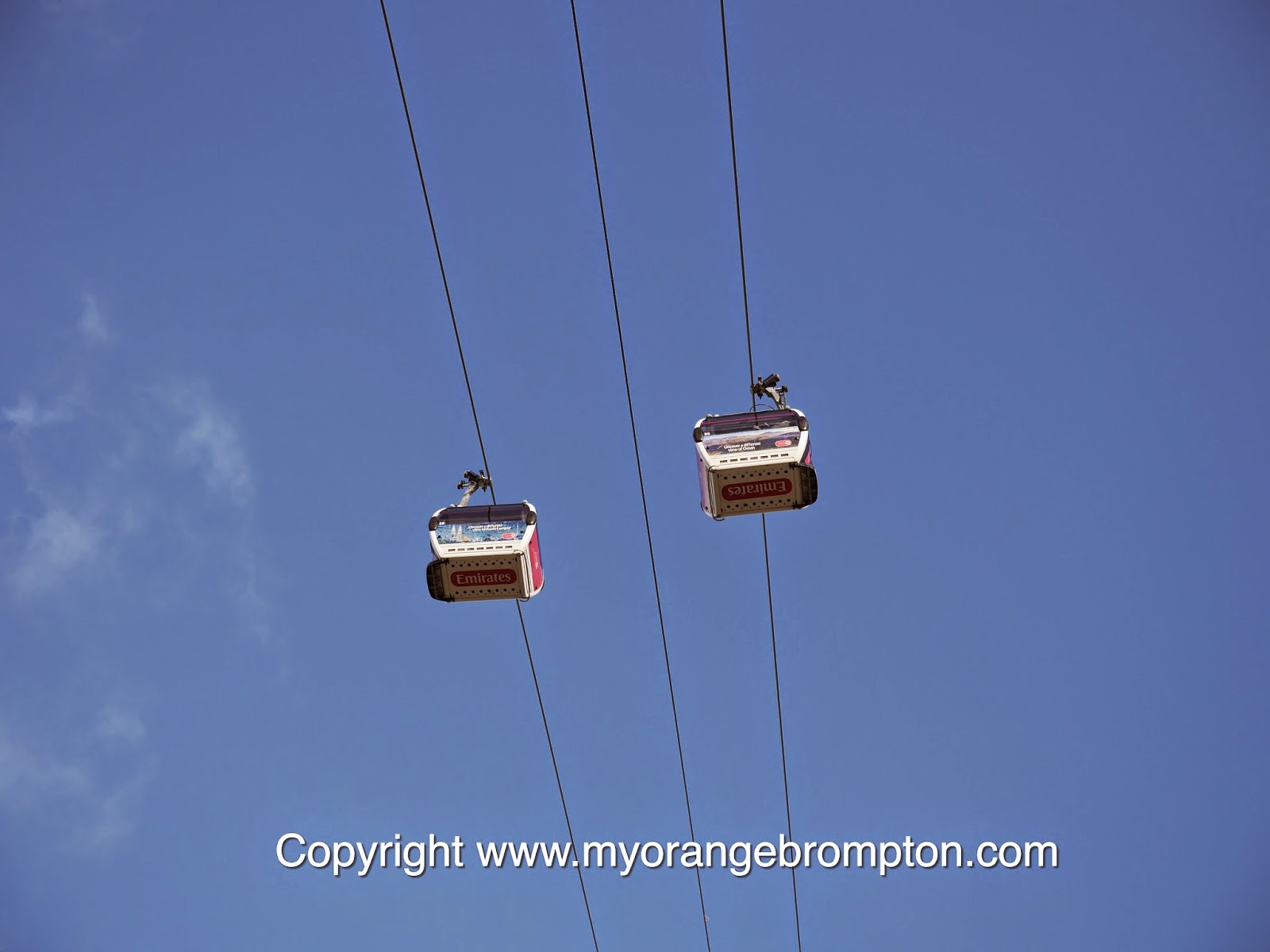 At the O2 a fountain - this time a randomly timed jet of water - proved too much of a draw for the fun loving Bromptonian. With timing just out David, James and I think Jenny got a little soaking. 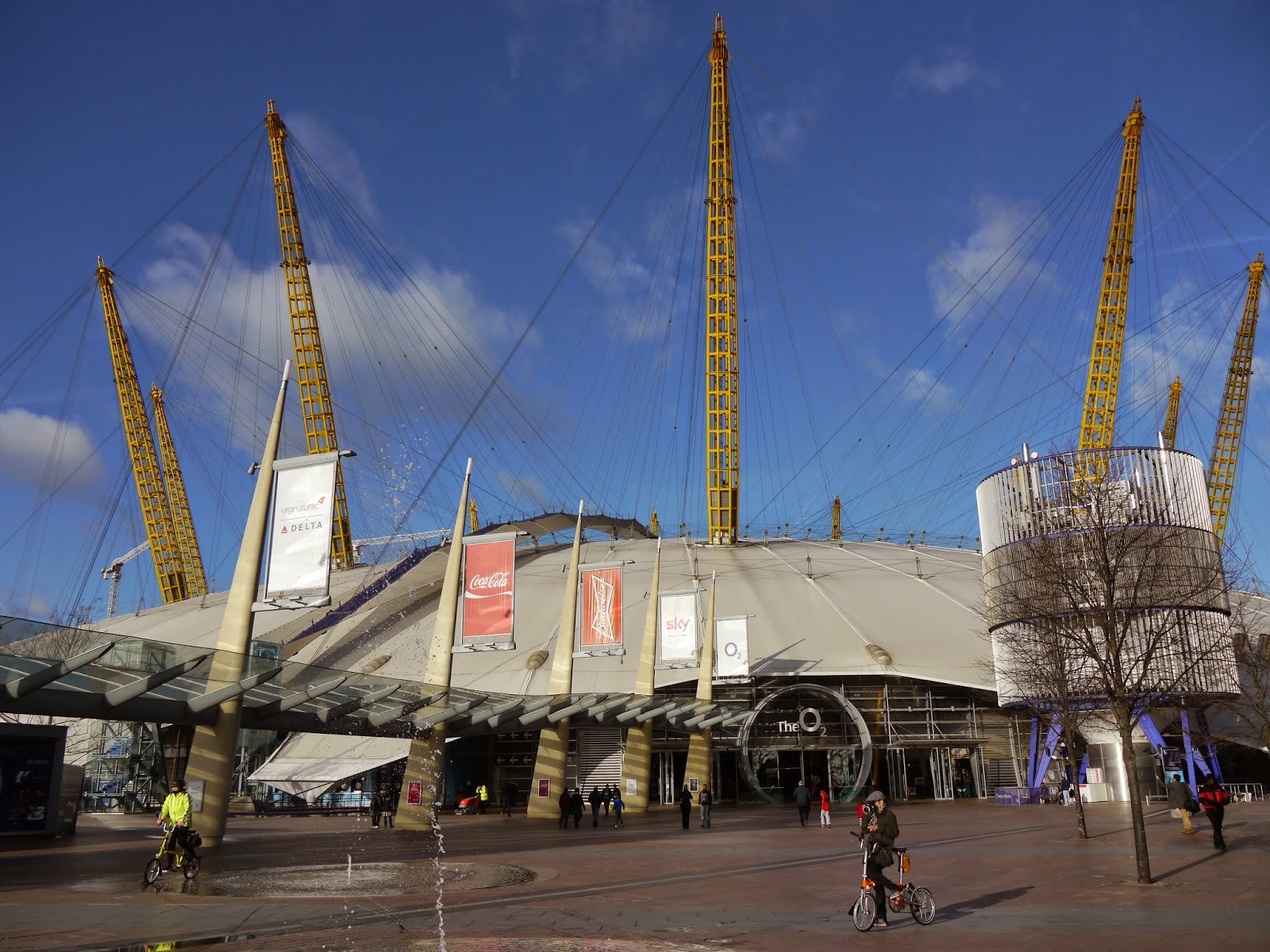 After some refreshments we headed back toward Central London. The battery of my Garmin 810 which I not charged died at some point along the way but having too much to keep me occupied I didn't care. 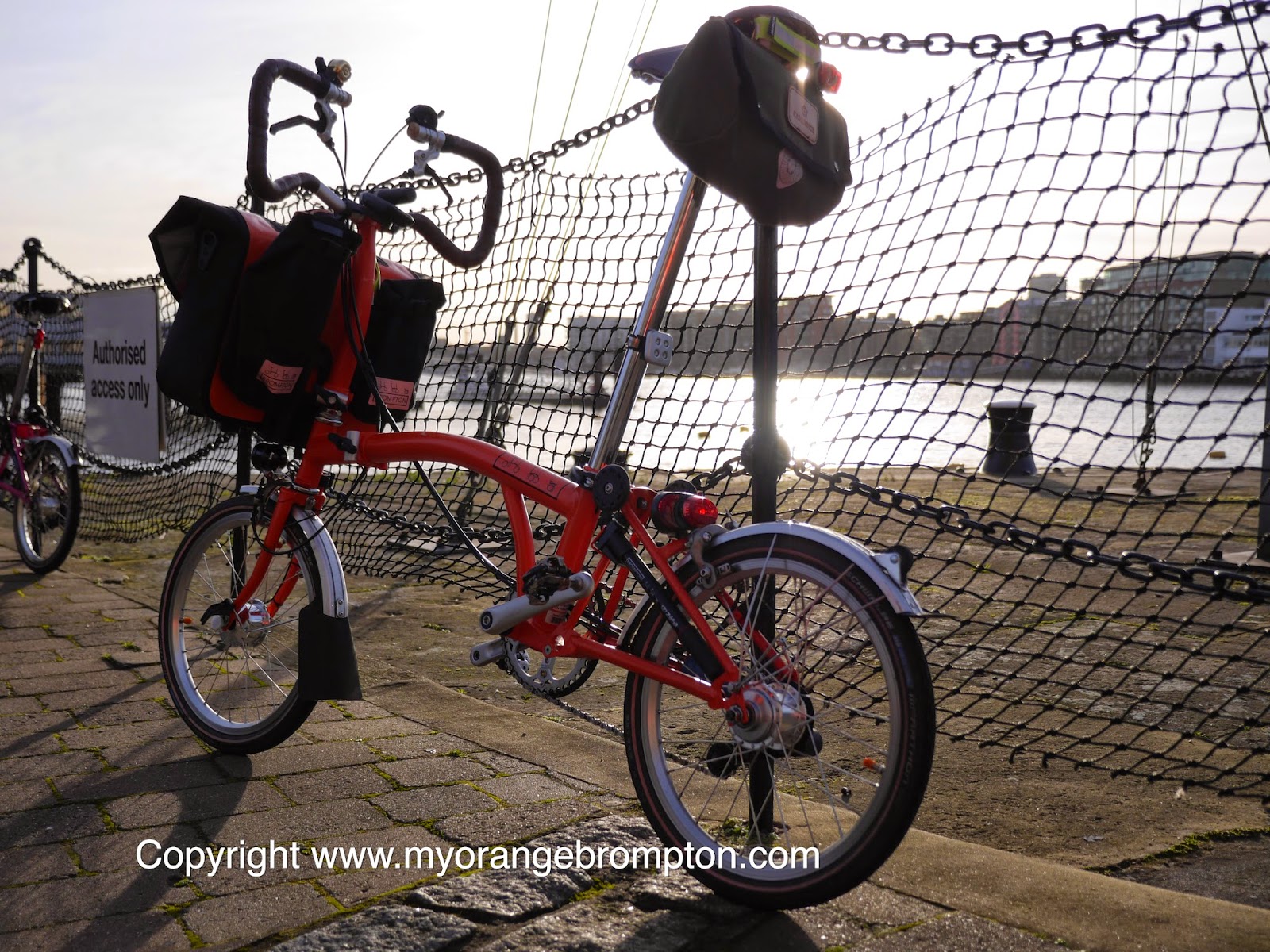 Once back in Central London we headed our separate ways and said goodbye. This marks the last ride this side of Christmas and was a little bit of a bonus. A big thank you to David for his navigation and to all who took part.

There really is a great deal of fun to be had on a Brompton. I see many cyclists who commute to work and some of them have the same look on their faces that car drivers have stuck in traffic jams. Of course some of these people are Brompton users but for me and many of my fellow Brompton friends, it is a form of transportation that if nothing else is almost guaranteed to put a smile on ones face.

The link to the small video I made of this ride can be found by clicking on the link below:

Link to video of this ride