The London Christmas lights ride was an idea I put forward for a ride a few years ago. With my sense of direction leading it might have been a disaster but David stepped into the breach and provided a ride that was not only well navigated, it was an interesting and fun route. This Friday night into the early hour of Saturday morning was to be the third such ride. It has become a particular favourite of mine and one I look forward to as an annual event.

Sadly, my partner in Crime Andrew, Mark (King of the Hill) and Mick (Co-founder of the the Club) were unable to attend but despite this I was pretty certain it was going to be a great way to spend a night out.

The weather was forecast to be decidedly chilly and it was. Being a firm subscriber to the laying school of thought, I embraced this with enthusiasm and put on a few light base layers. This seemed to do the trick as I didn't really feel the cold all night.

I took my Orange P6L with me but that sounds as if I have a choice. My Titanium Orange Brompton still sports Kodaks, no mudguards and is more of a fair weather bicycle anyway.

I headed off to Charring Cross Station the agreed meeting point but being a tad early I decided to take a few photos of Hyde Park Corner using my trusty camera and event more trust Goby tripod. 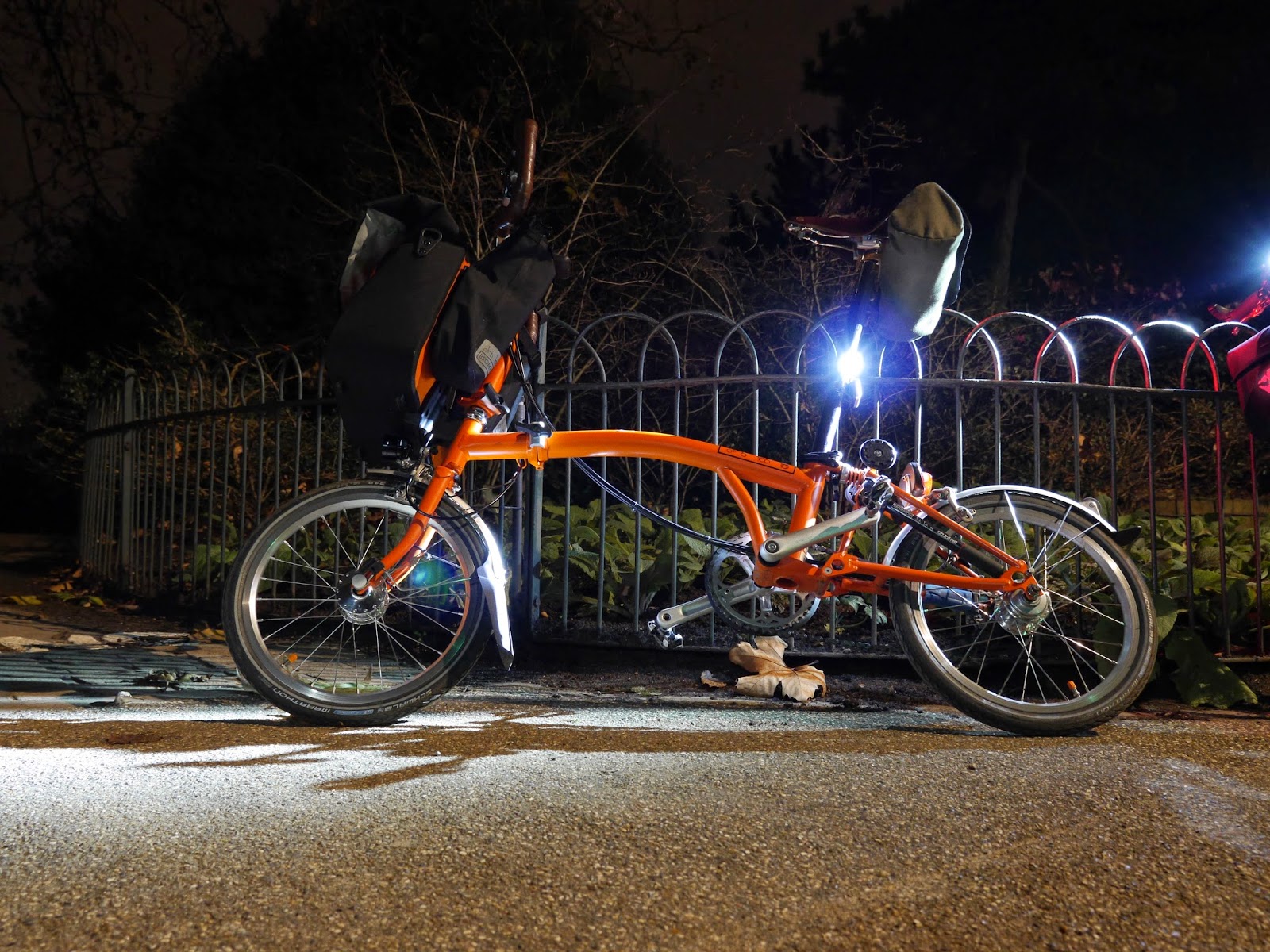 When trying to compose the shot below I had the whole area to myself but was soon joined by a couple, worse for wear, who decided to stand less that 5 metres from me to have an argument and break off their engagement! 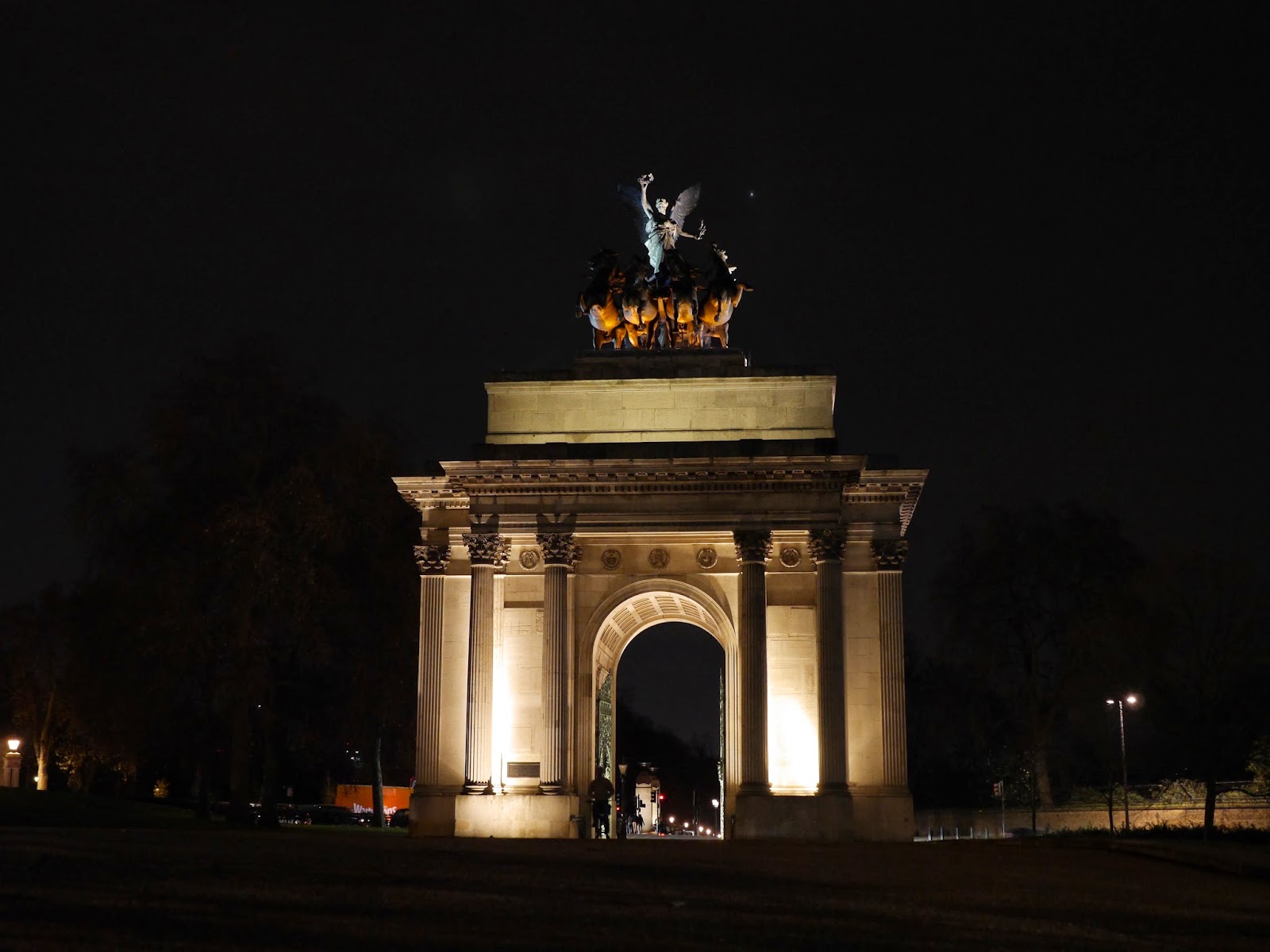 After a few photos at Hyde Park Corner I cycled to Trafalgar Square which seemed rather quiet. Perhaps the chill in the air had kept people indoors? 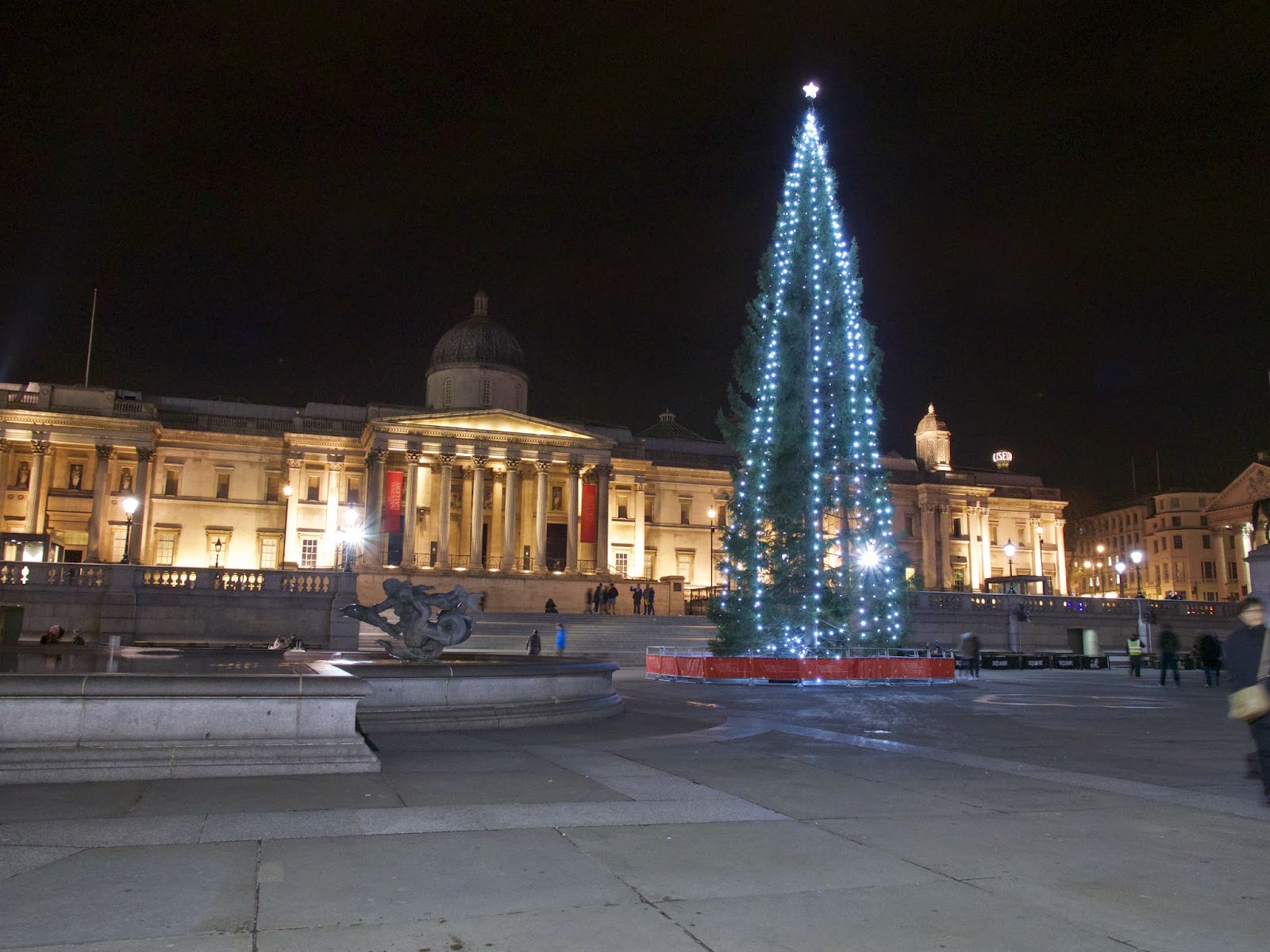 Upon reaching Charring Cross the usual buzz of activity of people trying to get home was flying around. This location has been my meeting point for so many Friday night to the coast rides and I half expected to see Geoff roll up on his red Brompton.

Before long we were all assembled and waiting for Graham who had been delayed slightly. As it was a night ride I decided to wear the quite excellent Proviz 360 as for me it is the ultimate night riding jacket. I was pleased to see that Zoom-Zoom Brompton and Sleabus were sporting the very same jacket.

While we waited for Graham I encountered a slight problem as far as my camera was concerned. My camera has a quite excellent eye sensor. When you bring the camera up to your eye the LCD screen cuts off and the viewfinder kicks in.Unfortunately, the reflective qualities in my jacket meant that the eye sensor was being activated by the jacket when using the LCD screen. I would have to work around this slight problem.

During this time Sleabus showed me his camera and lens which produced quite stunning photos. It was a Canon 5D Mark III with a 50mm f1.2. The bokeh it was able to produce was velvety smooth.

After a brief prep talk by David we departed after Graham had arrived in a penguin onesie which was a pretty fine outfit. He was however outdone by James who was wearing a particularly good suit. Perhaps he had just come from work? 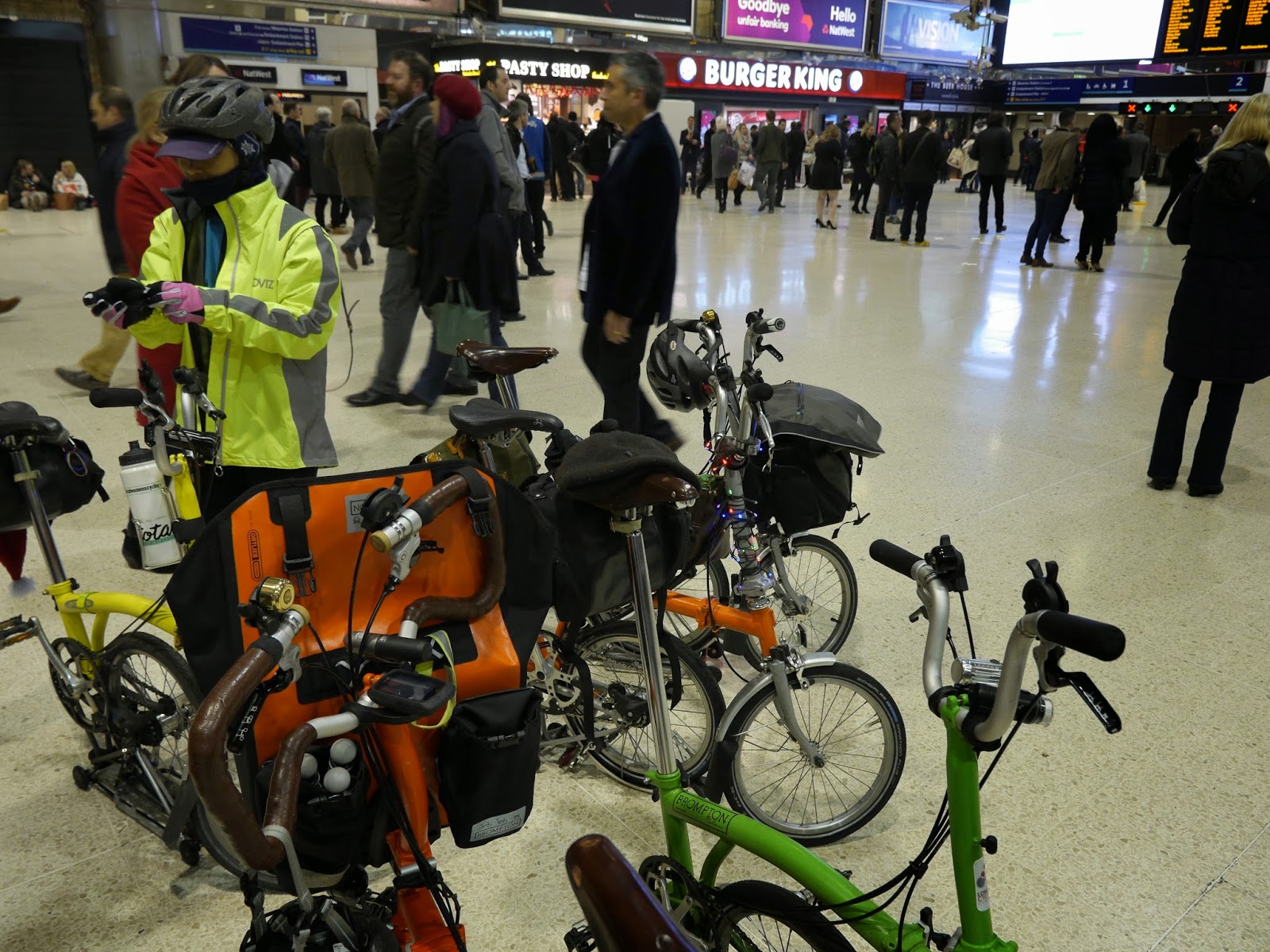 As we departed Charring Cross. things felt a little quieter than I recalled for previous Christmas light rides. The route David had chosen was one that visited old haunts and the new and fresh. Every so often we stopped for a photo opportunity, chat, snack or whatever people felt like doing. 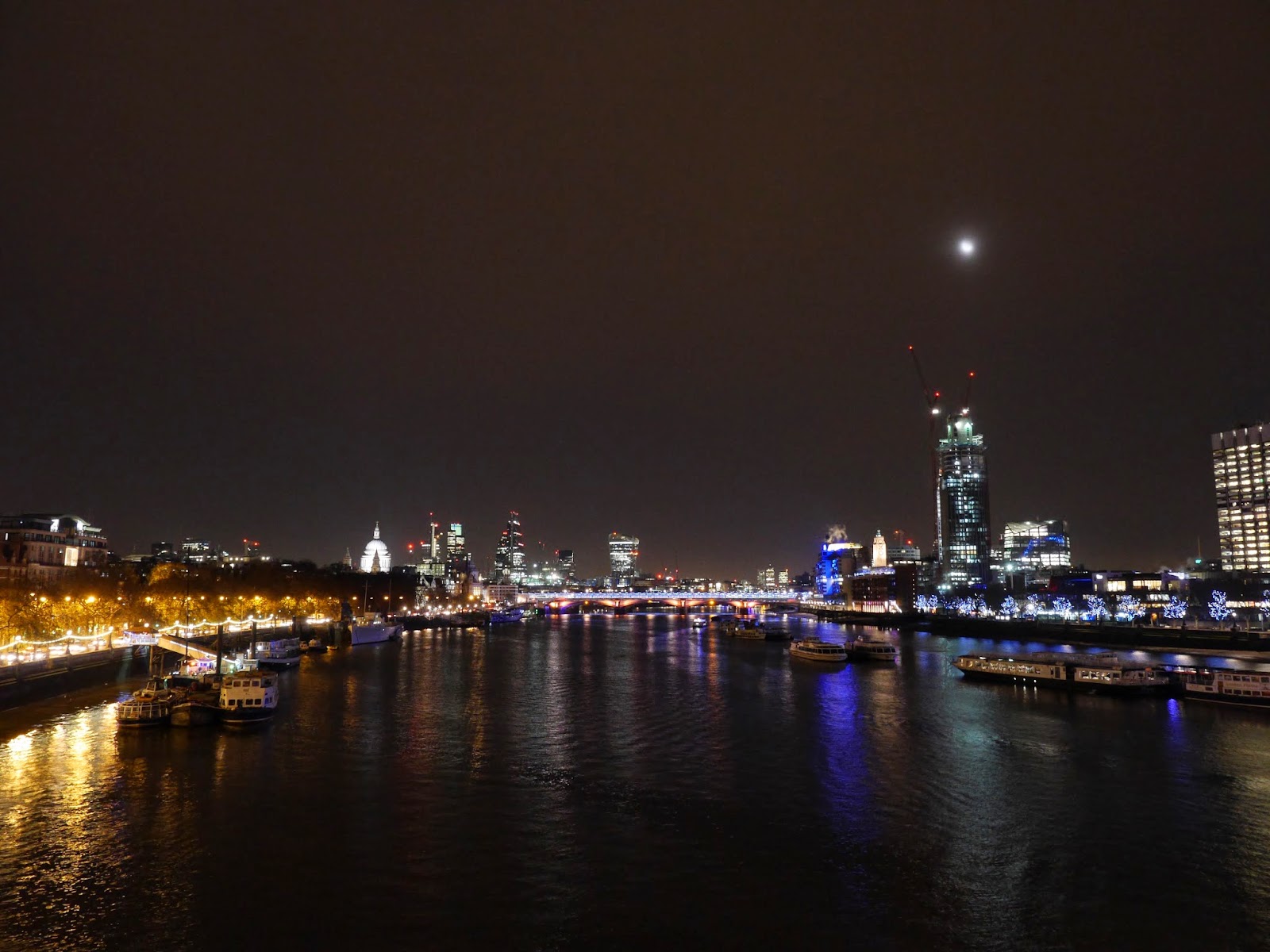 The time really did seem to fly by. Participants on this ride were enjoying themselves. When we reached the fountains looking out towards Tower Bridge many rode through or round it in circles. It might have been a way to keep the muscles warm but I suspect it is the Brompton bicycle phenomena  that induced a childlike excitement. 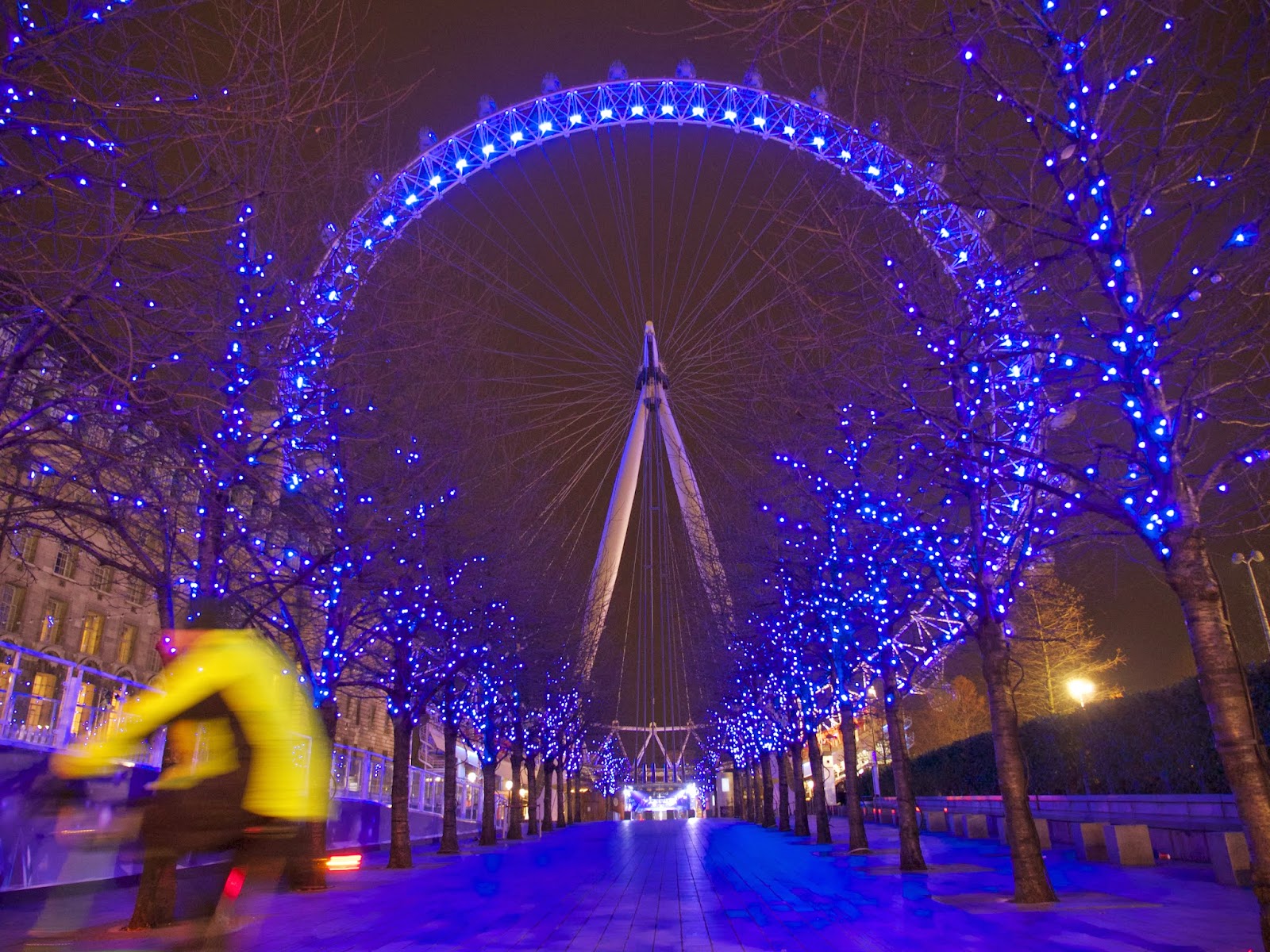 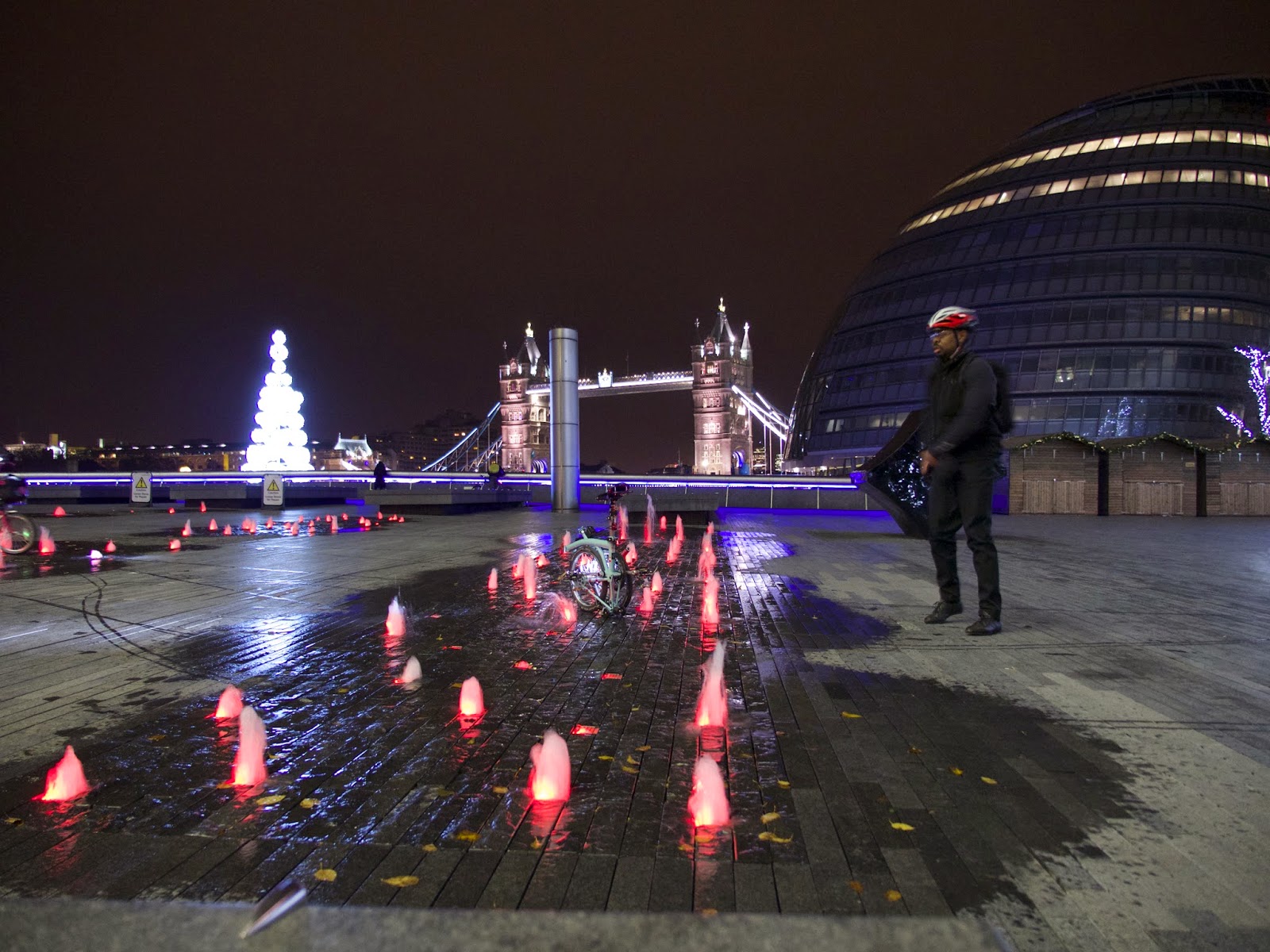 David and Tony decided that they wanted to hold a Brompton above their heads. Tony favoured a folded bike and then not satisfied got a second for his other arm. David decide on holding his unfolded Brompton above his. 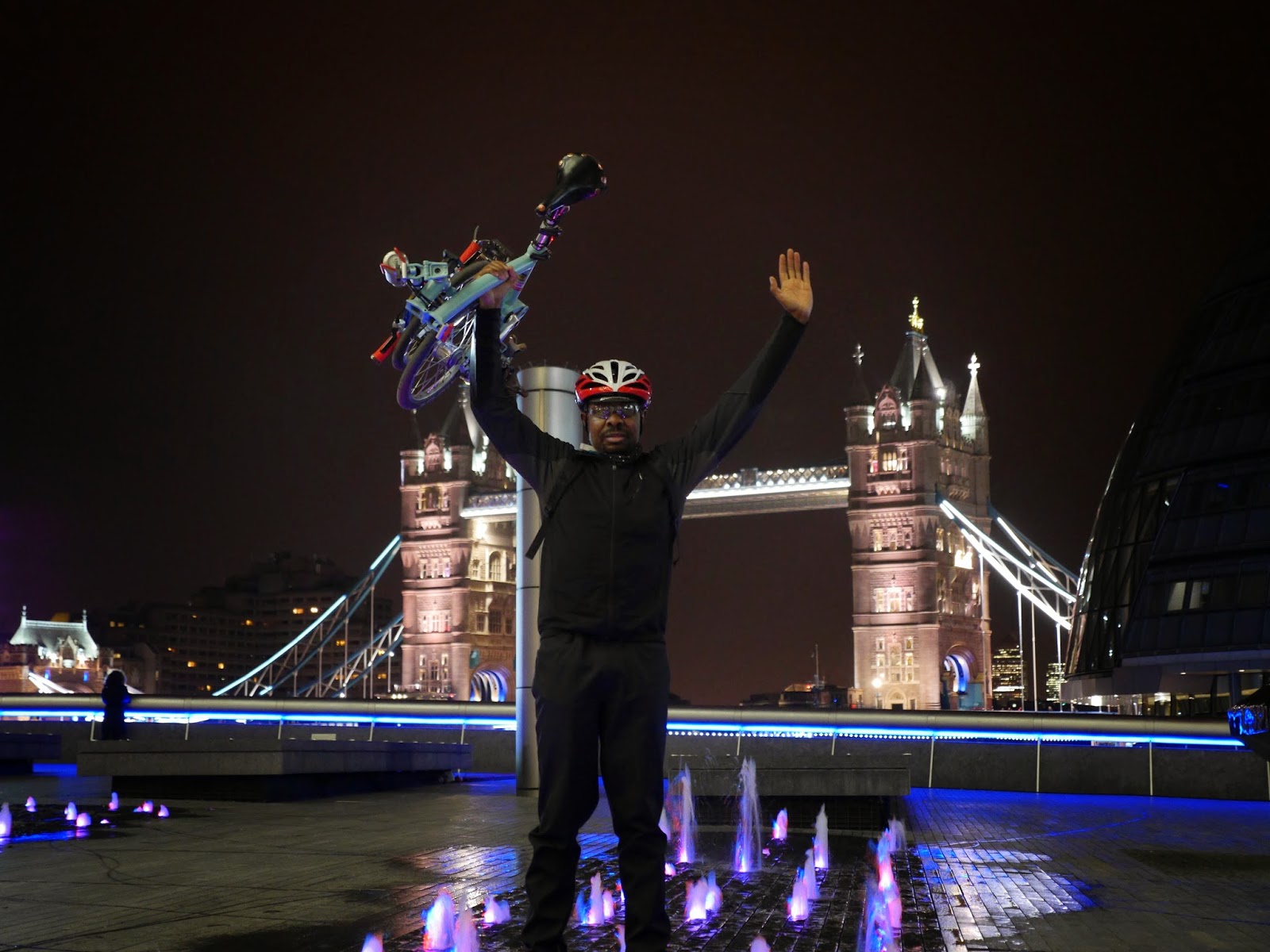 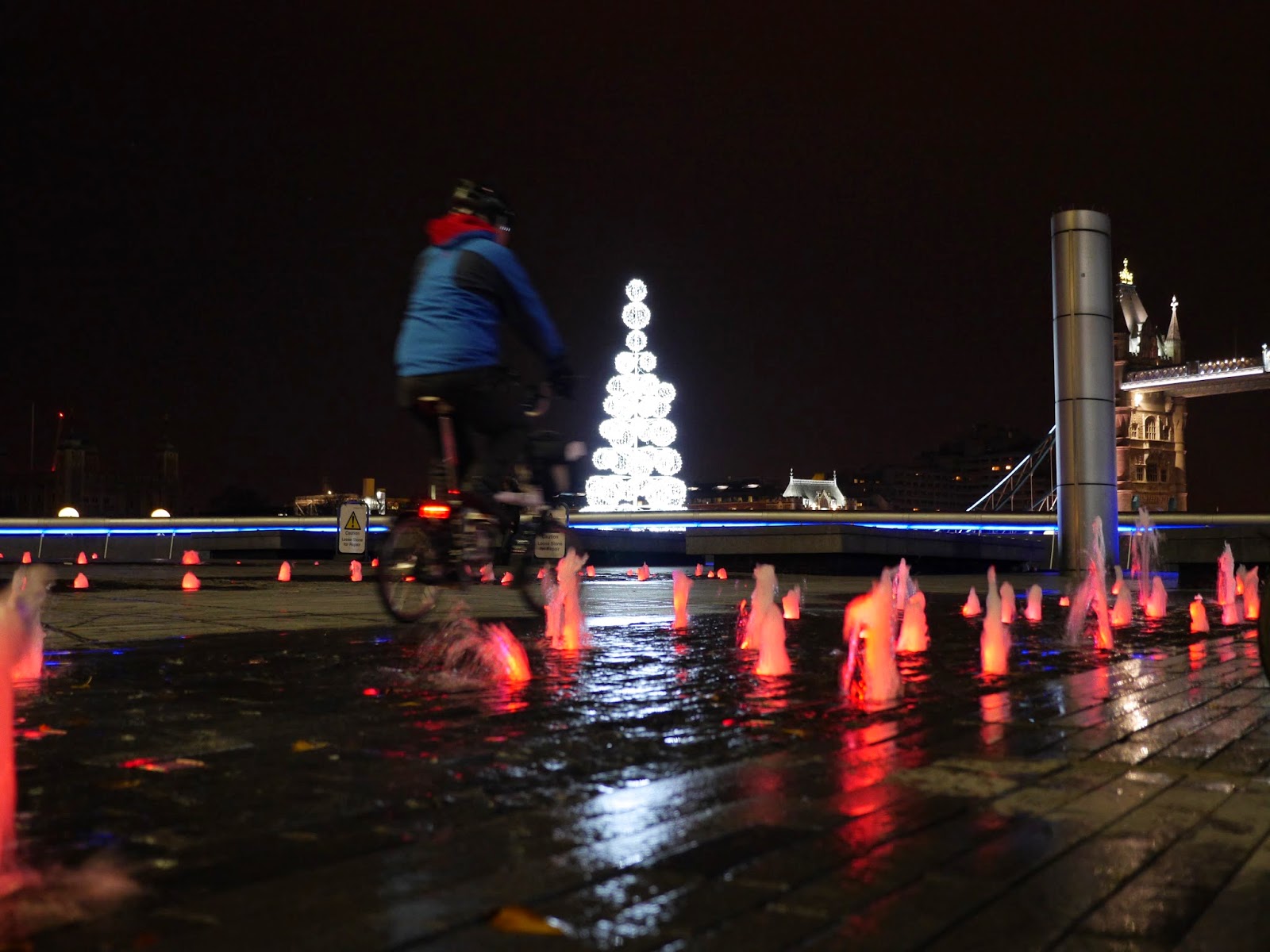 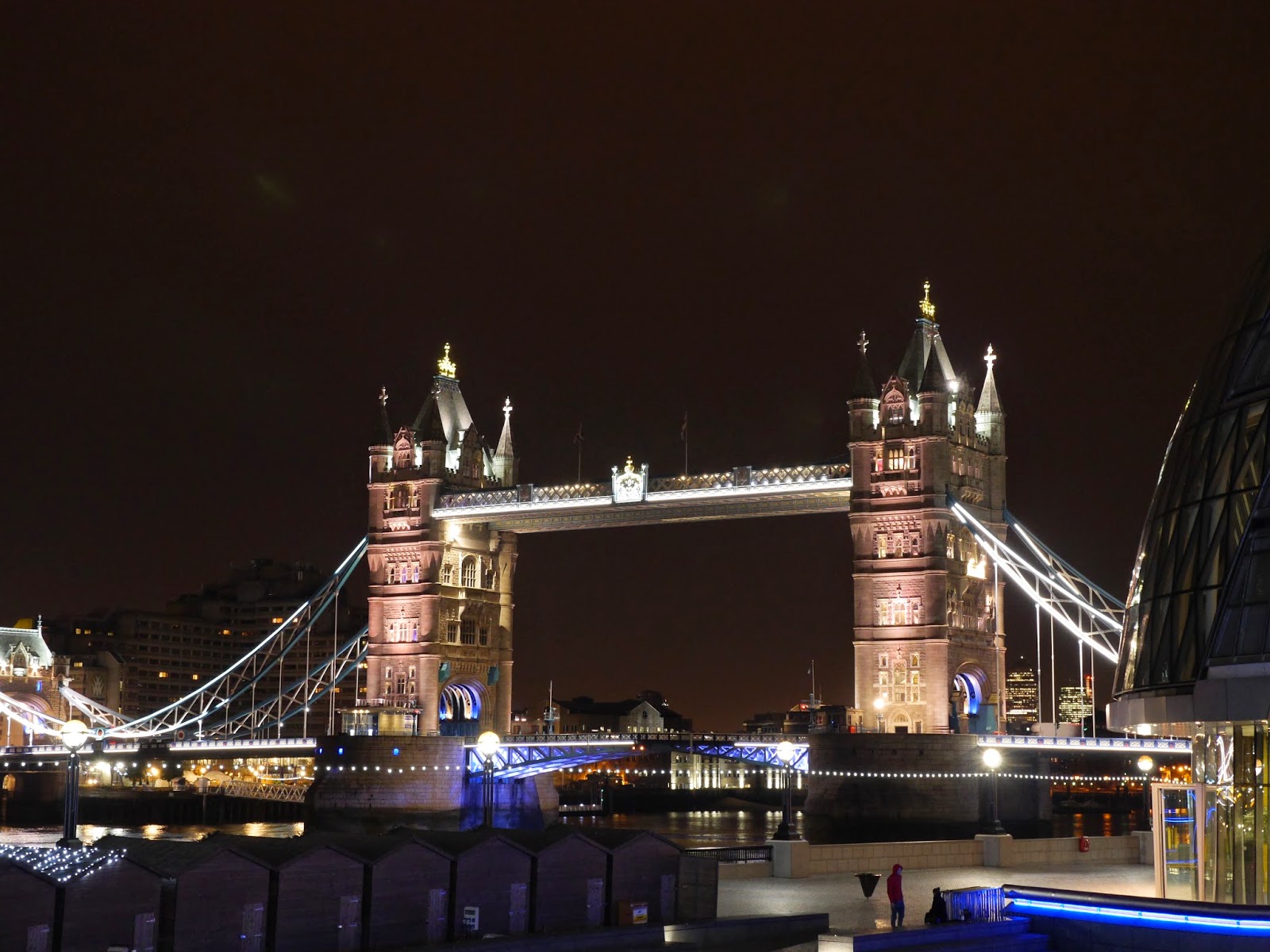 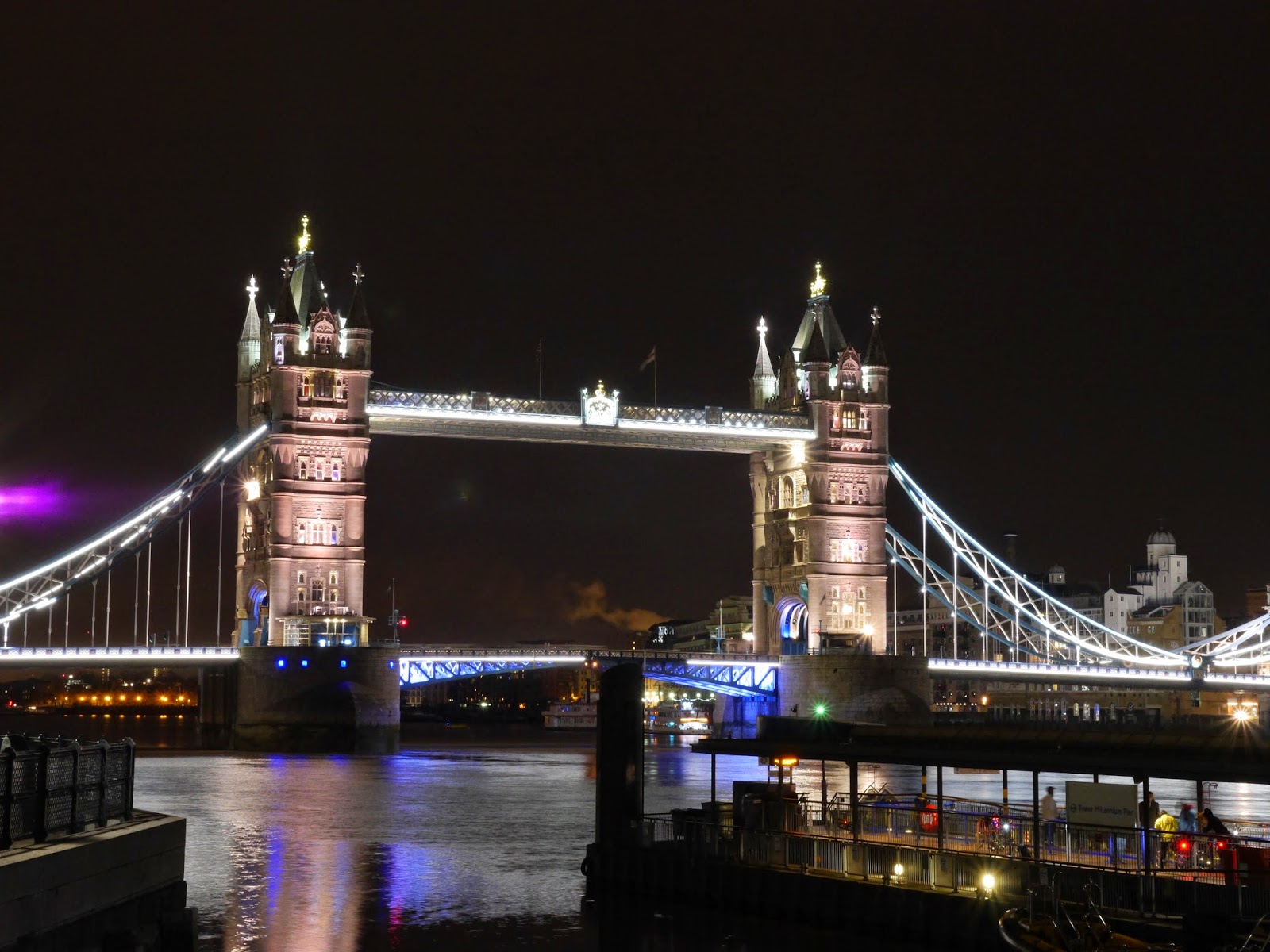 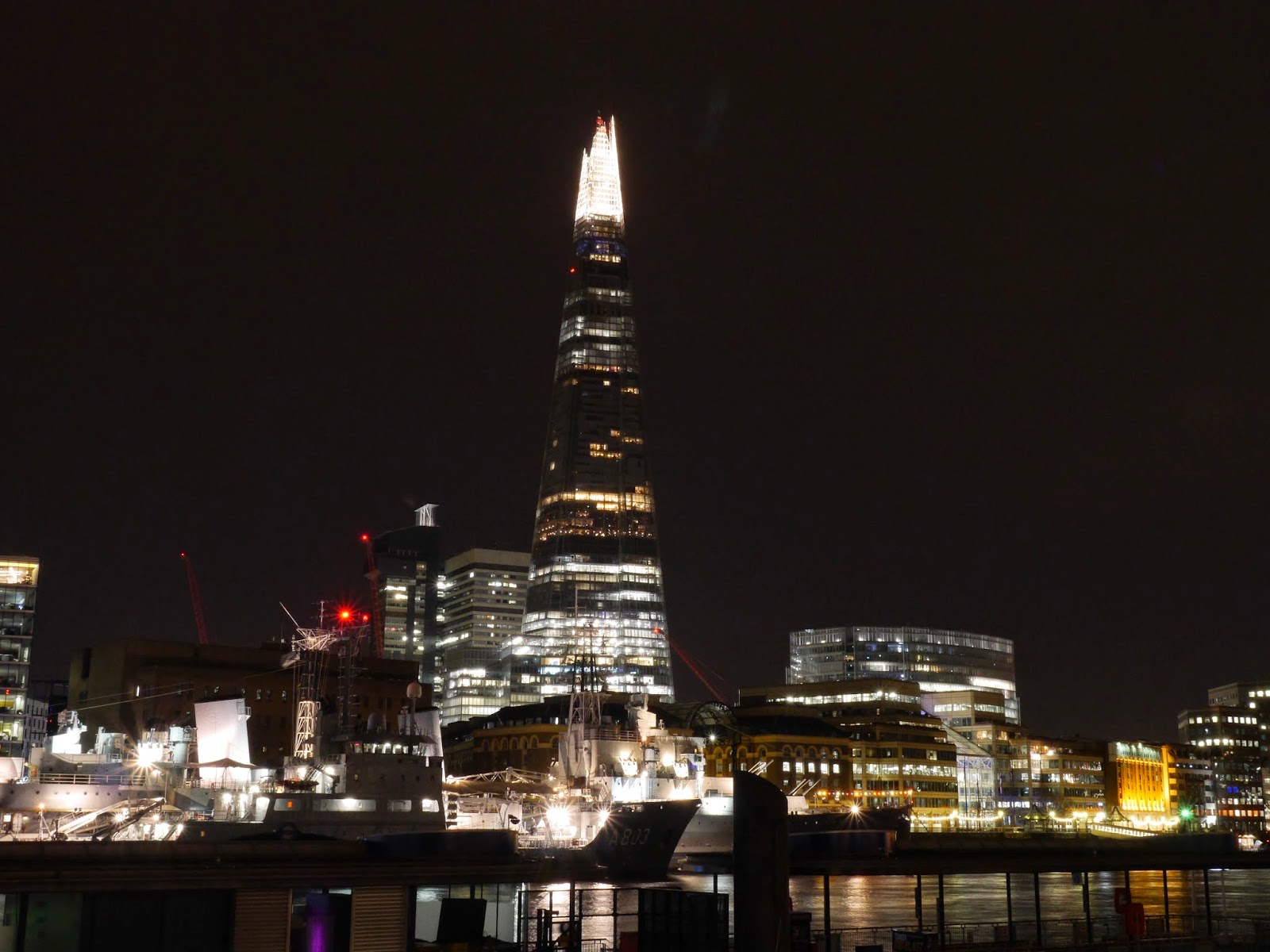 At almost 03:00 to the very second we arrived at St Pancras Station for refreshments. Normally the Starbucks inside - which is open at this time - is quiet with but a few stragglers waiting for the moment when the trains start running again. On this morning it was rather full. After having a drink and a bite to eat we were off again out into the night which as always after a stop inside felt decidedly colder than it had before.

We rolled down towards Oxford Street but as the light on offer there were a little underwhelming we headed for South Molton Street and its rather more festive and inspiring arches. It was at this location that many of use took lots of photos. Tony and I were engrossed in this noblest of pursuits and became separated from the group. We cycled around for a short while hoping to find them but it took a phone call to David to get us all back together again. 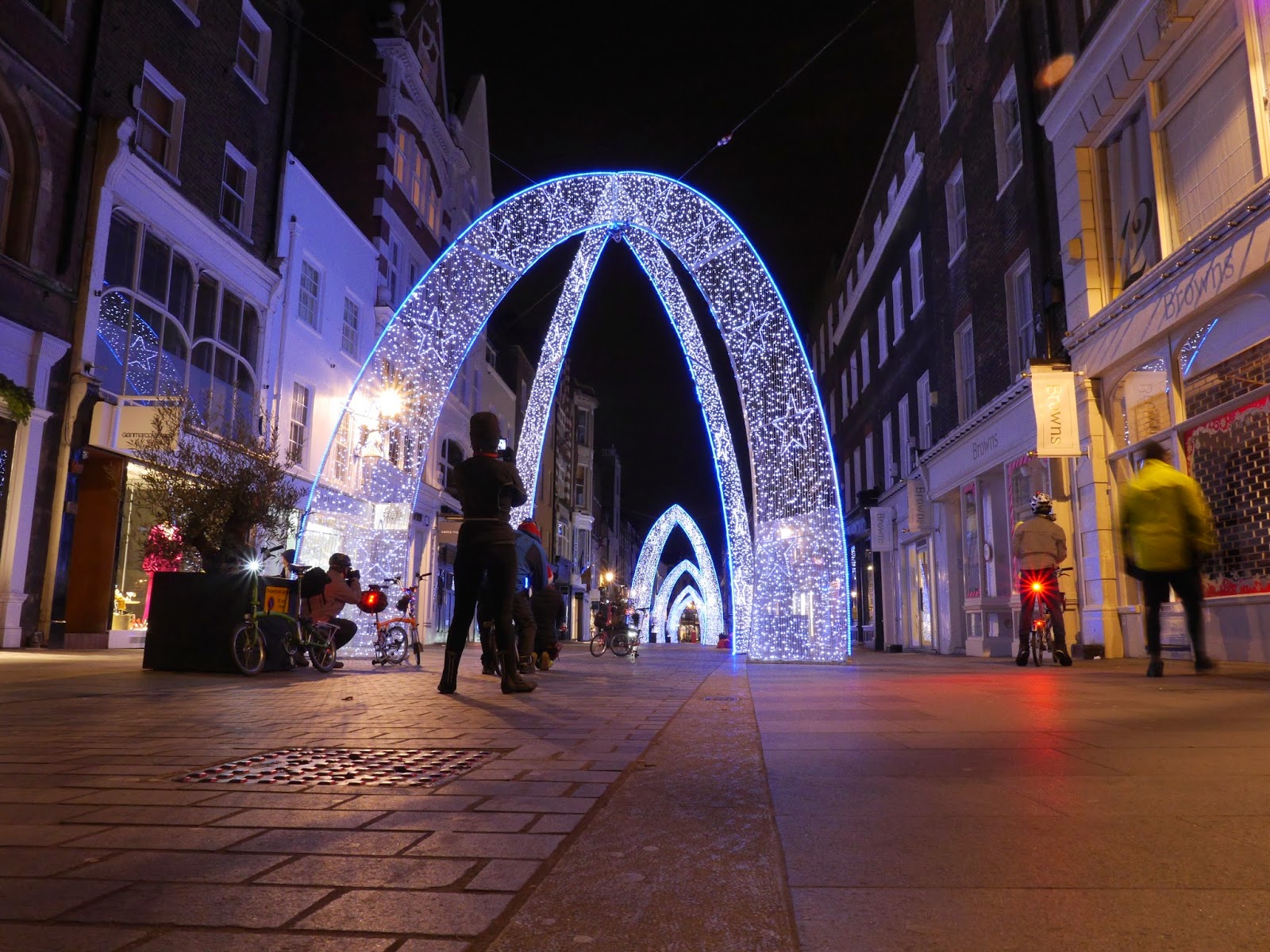 Regular readers will know that I have remarked London being rather special at night. With the addition of Christmas adornments, things take on a more enhanced hue.

When we cycled through Hyde Park we did so alone with virtually no sound at all apart from that made by our bicycles. Perhaps due to feelings of tiredness creeping in our ride through the streets of London were the suff of dreams. Cycling along one could almost hear the little voice in the back of your head saying...'are you really here? Are you actually in your bed fast asleep?' 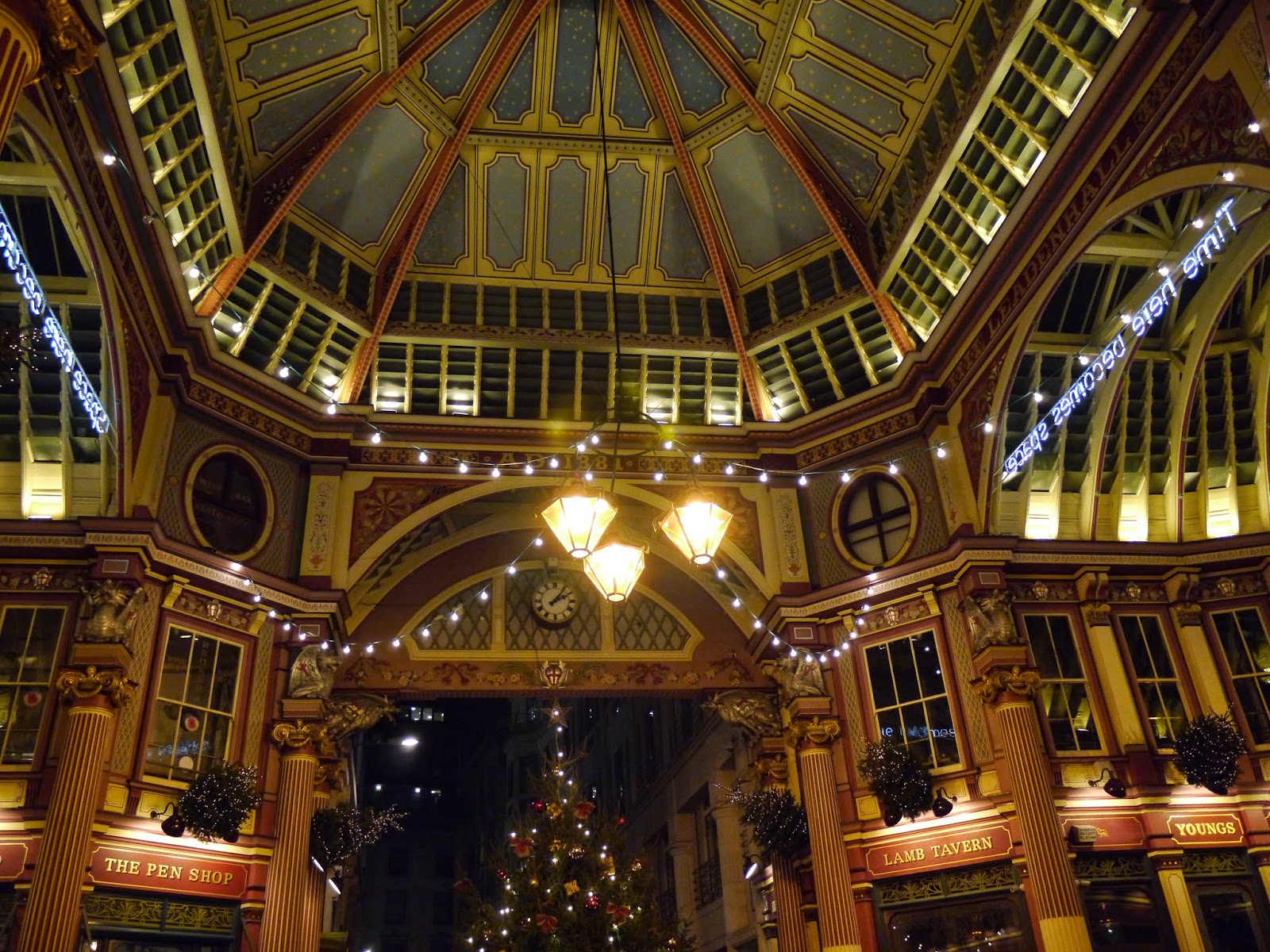 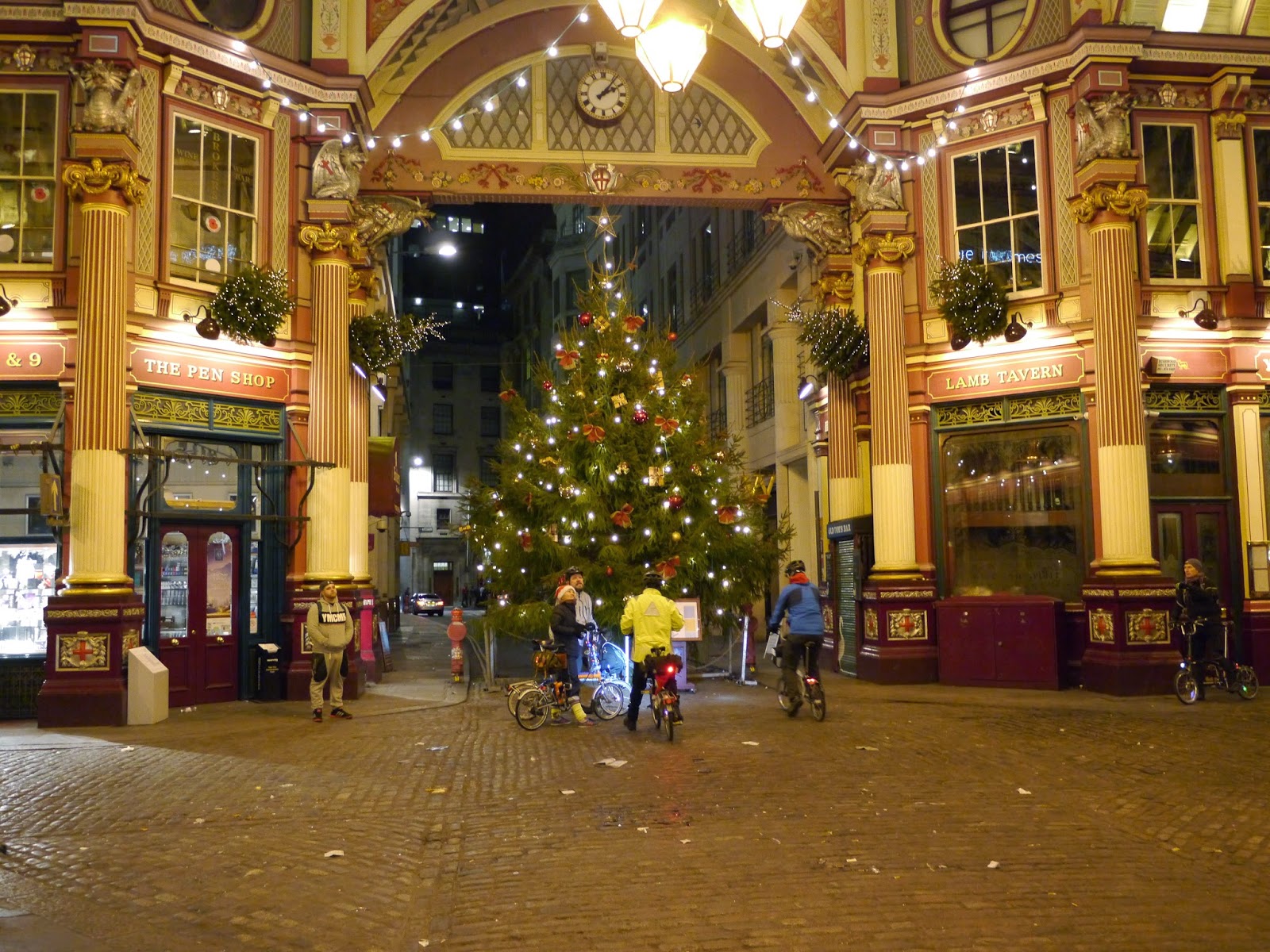 We encountered two punctures on the ride and both were swiftly and expertly taken care of. The last was towards the end of our ride and the picture below is the view from where the repair was carried out. I suppose if you're going to suffer a puncture, this is the place to do it. 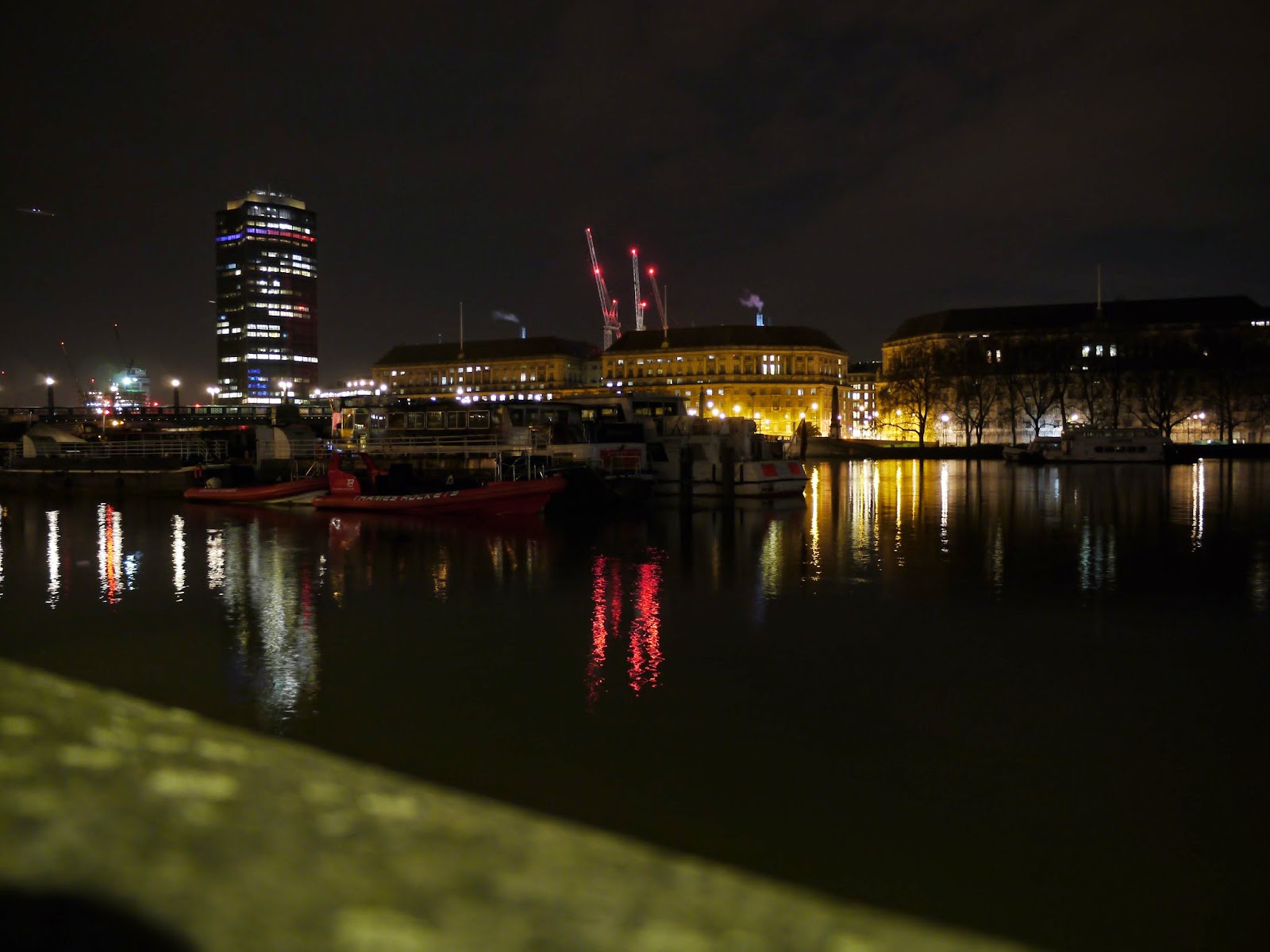 We headed back towards Covent Garden and it was only fitting that we more or less ended the ride soon after paying a visit the the Brompton Junction Store there. After this we looked for a suitable place to have a hot drink and something to eat. Eventually we found somewhere and were able to chew the fat for a while.

After just short of 30 miles we headed our own ways and this brilliant, dare I say magical ride was over. As I cycled back home through Hyde Park and wondered whether people jogging or walking their dogs would know what I had just done? 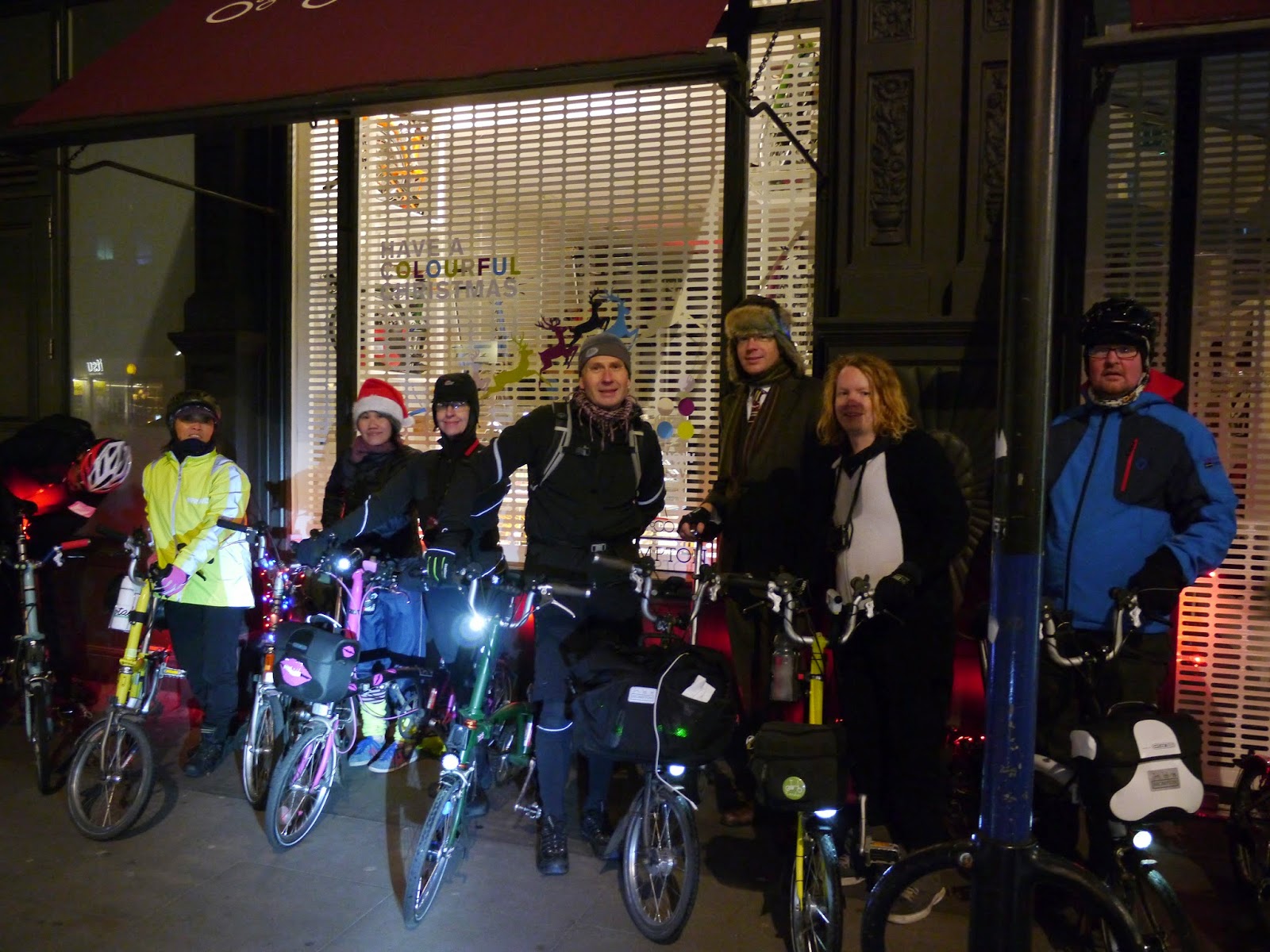 This was a great way to spend a night out in London and all the elements to make it special. Great company, seeing London after hours, photo opportunities and the chance to ride ones Brompton on fairly quiet roads. A very special thanks to David for his ever excellent navigation, route and organisation of this ride.

If you like the sound of this, I urge you wherever you live to try and do the same. What's the worse that can happen?  As for me, I cannot see me waiting another 12 months to repeat this ride. I am pretty certain that over the next few weeks I will try and do something similar.

The map of our route and ride data can be viewed by clicking on the below. I also shot quite a bit of video and made a short video which you can see via the link also below if you haven't already done so via a previous blog post.

Map and ride data for Christmas All Nighter

Link to my video of the Christmas All Nighter ride
at December 14, 2014