The Mitie Revolution on a Brompton

The Mitie Revolution is an event that has been listed on my calendar for quite a few months. It is a sportive charity event mainly for road bikes but being made of sterner stuff I was one of a select few mad brave enough to sign up. Over two consecutive days, day one would consist of 100 miles. Not just any old 100 miles, no. A route that would push all Brompton participants to the limits. Would we survive?

The event started at the Lee Valley Athletics Ground and the journey there involved boarding a train from Liverpool Street Station to somewhere called Ponders End. As soon as I got there I saw lots of other participants, all with road bikes. As I attempted to buy a ticket one roadie enquired whether I was taking part in the Mitie Revolution. When I confirmed that I was he looked incredulous and the only thing he utter as he raised a near shaking finger at my beloved Original Orange Brompton was, "on that!?"

Finding my train platform I folded my Brompton and disaster struck. My helmet - a requirement for taking part in the event - rolled across the platform as the handlebars looked into place (the helmet had been suspended from them) and fell down adjacent to the wheels of the train. With a slight sick feeling in my stomach I informed a member of staff. He said that I would have to wait until the train left before the helmet could be retrieved. This meant I would not be able to start the event with my friends!

Anne who had popped out the the carriage to greet me and hearing about my predicament offered to jump down and get it! Luckily someone else came to the rescue armed with a pair of long prongs used for picking up litter. Like someone taking part in a game show, I caught hold of it and all was good.

Once at the Lee Valley Park we registered and were given a timing strip to go on out helmets, ride number and wrist band. After a little last minute prep we made our way to the start line and waited for the off. 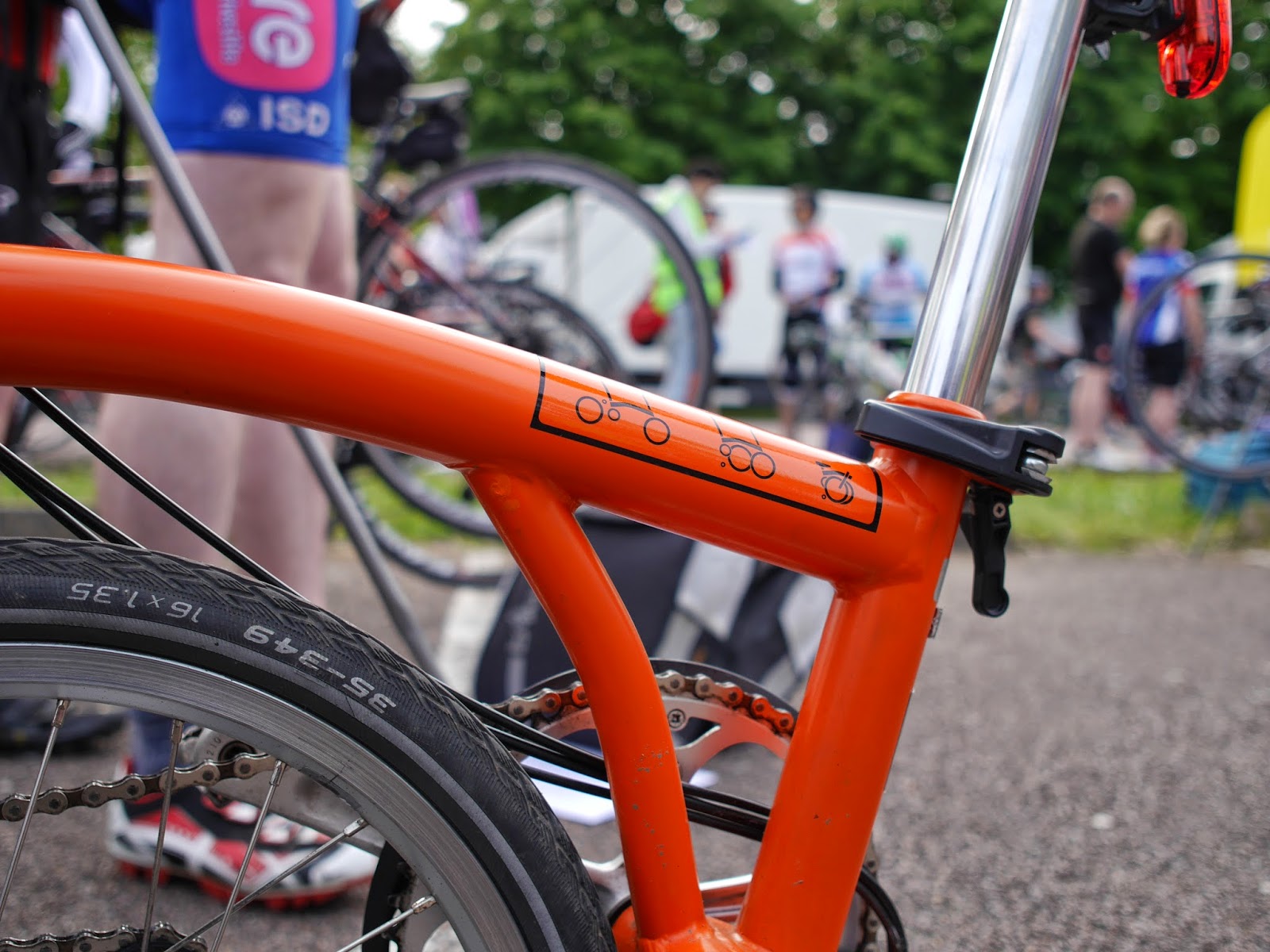 Those also taking part were David, Geoff, Jenny, Guy, Andrew and Anne on her big bike (as this was training for the Ride 100).


The ever jovial Bob was on his touring bike instead of his Brompton. I will let him off as he was acting as a support to riders - over both days.

The participants were varied. Men, women, old and young. The vast majority where on full on road bikes, some mountain bikes, hybrids and even a recumbent. As far as I could tell we where the only people on Brompton bicycles. 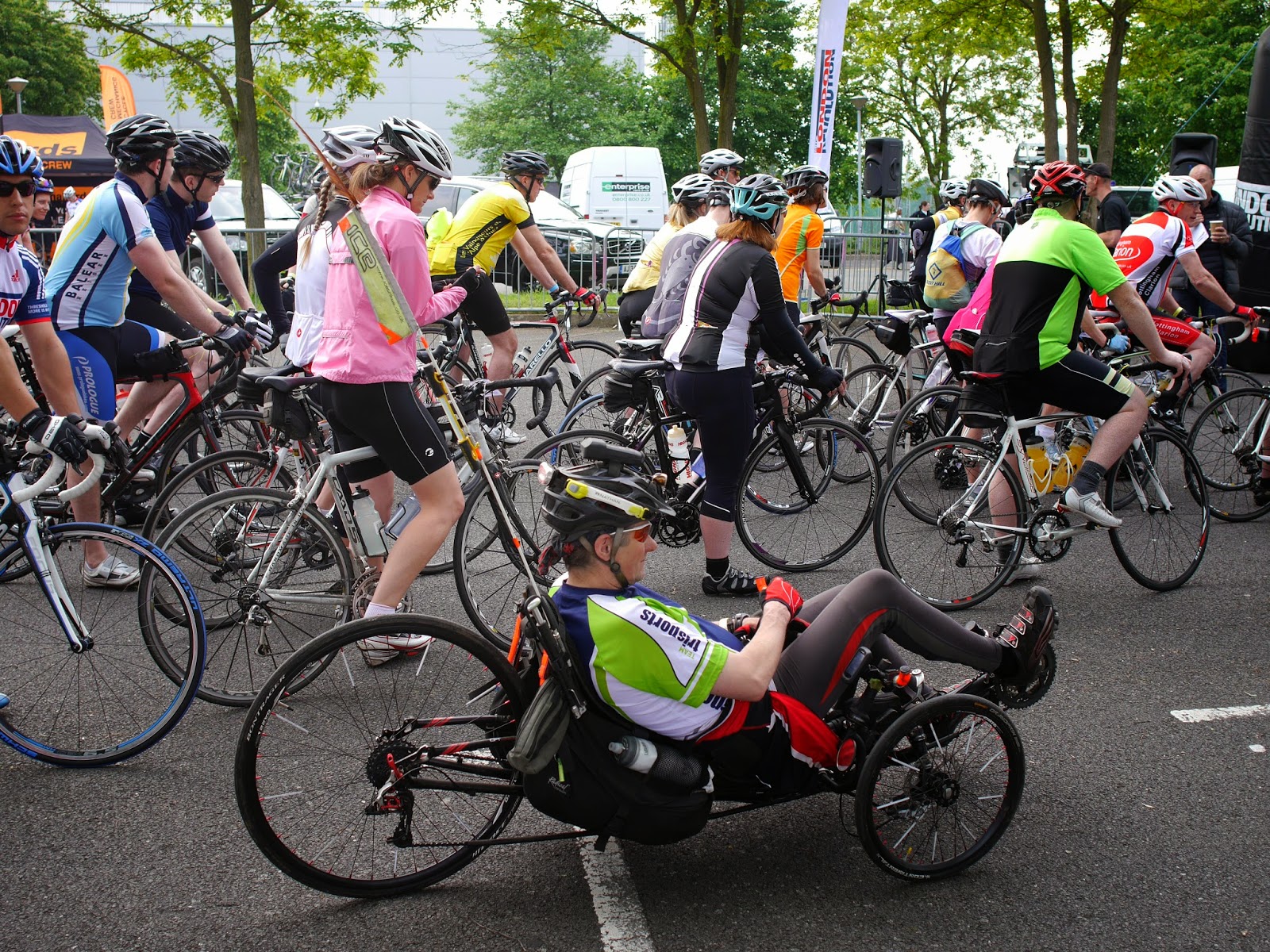 On the start we listened to the marshal give a briefing. It was a well organised event from start to finish and with very little fanfare, we were off with only 100 miles to go!! 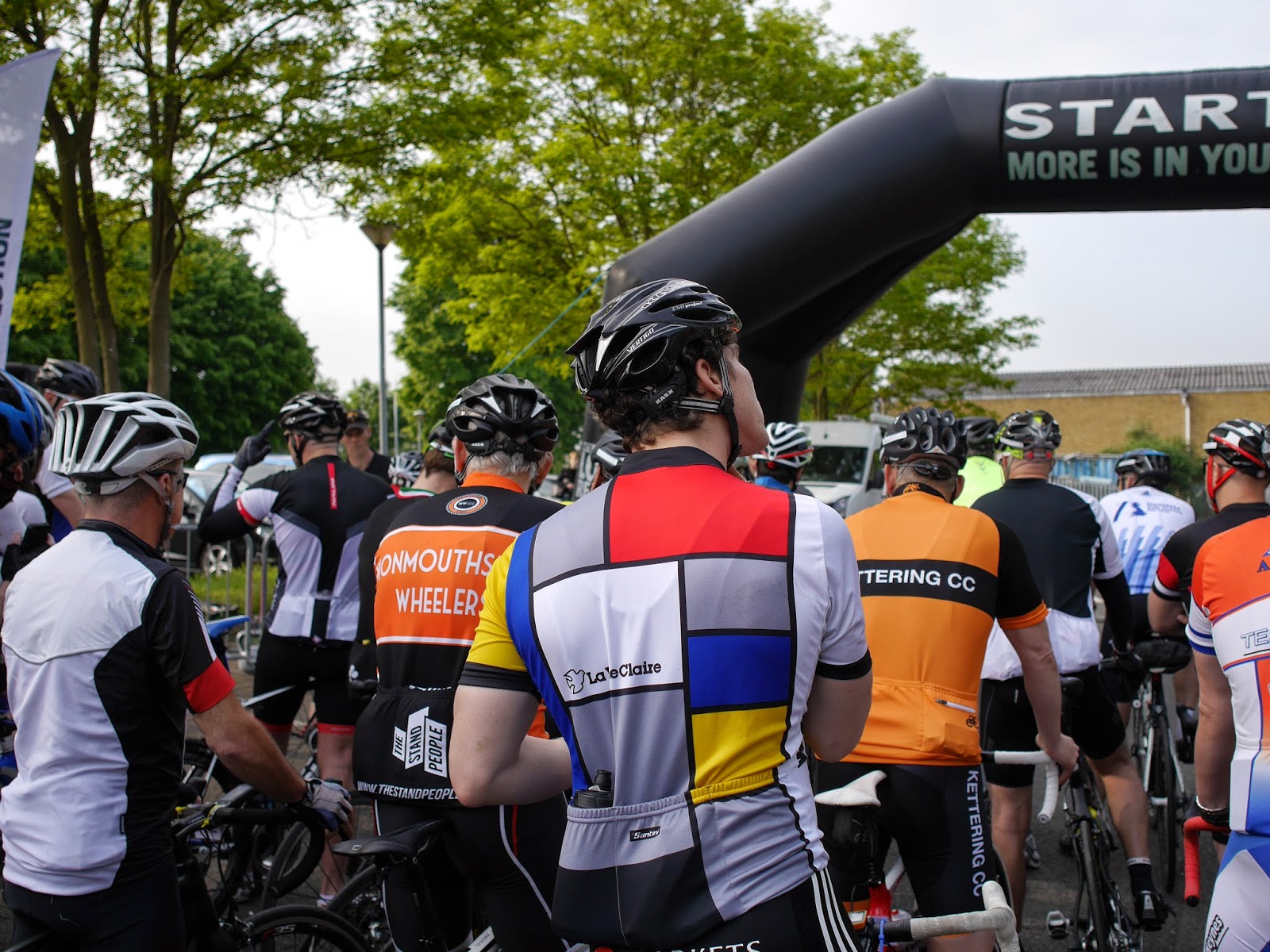 We set off together at a fairly moderate pace but it was soon very clear that riding together would not last. In truth we had all anticipated this anyway. David and Guy, both incredibly fit were off in front for the entire day. I came next - most of the time - but more on that later. Next was Jenny (who was signed up for the two days), Geoff, Anne and Andrew (who like Jenny was signed up for the two days). 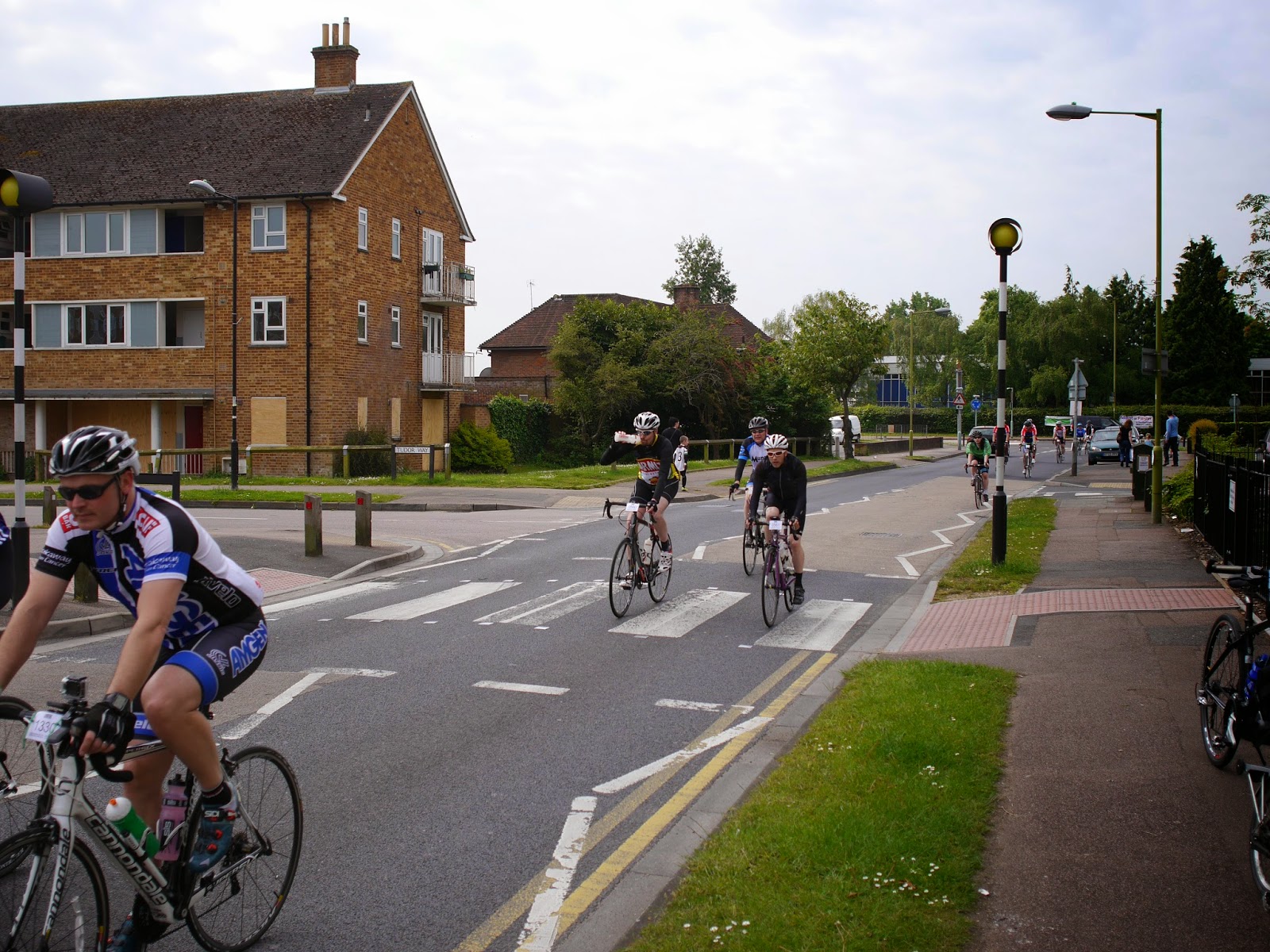 The roadies were very complementary about us Bromptonians. I suspect many could not believe we would attempt such an event on one, while others marvelled that we could keep up. Many of us proudly wore our London Brompton Club cycle jerseys. This was also a point of conversation and when I reeled off the sort of adventures we get up to, many were left lost for words. 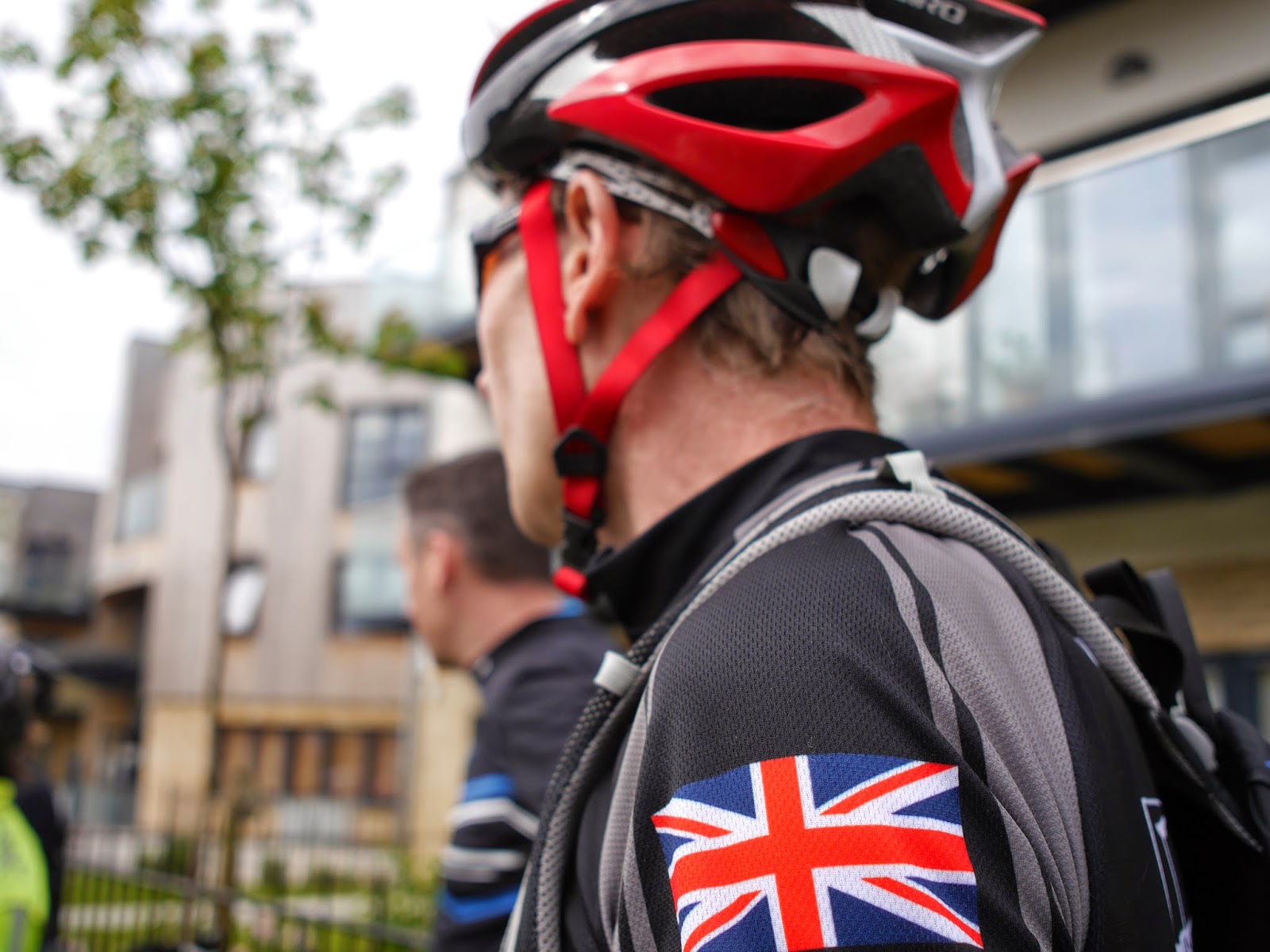 At one point on the ride I saw Guy in the distance waiting by what I thought was a ford. Upon closer inspection the ford turned out to be a flooded section of low lying road. I had no intention of cycling through it and minced around carrying my beloved Brompton.

Many others did the same, while some relived their childhood, leg spread eagled as they zoomed through it, smile on face. 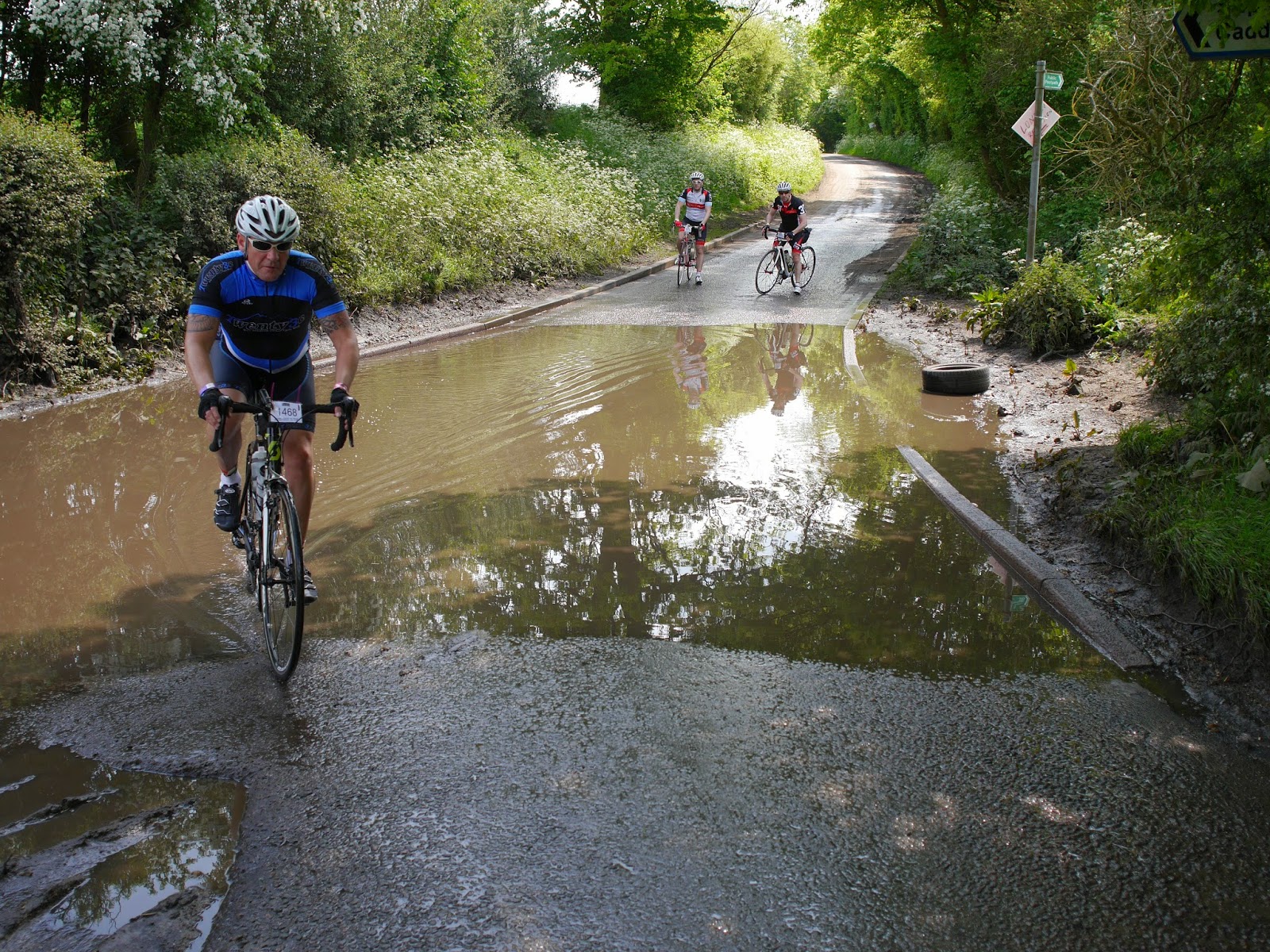 Countryside! Once we headed out of the Lee Valley area which looked a little tattered and torn we were treated to some of the most beautiful scenery I have experienced on a cycle ride. In a word it was stunning. It just seemed to be relentless. Views that one thought could not be beaten were outdone by the next. 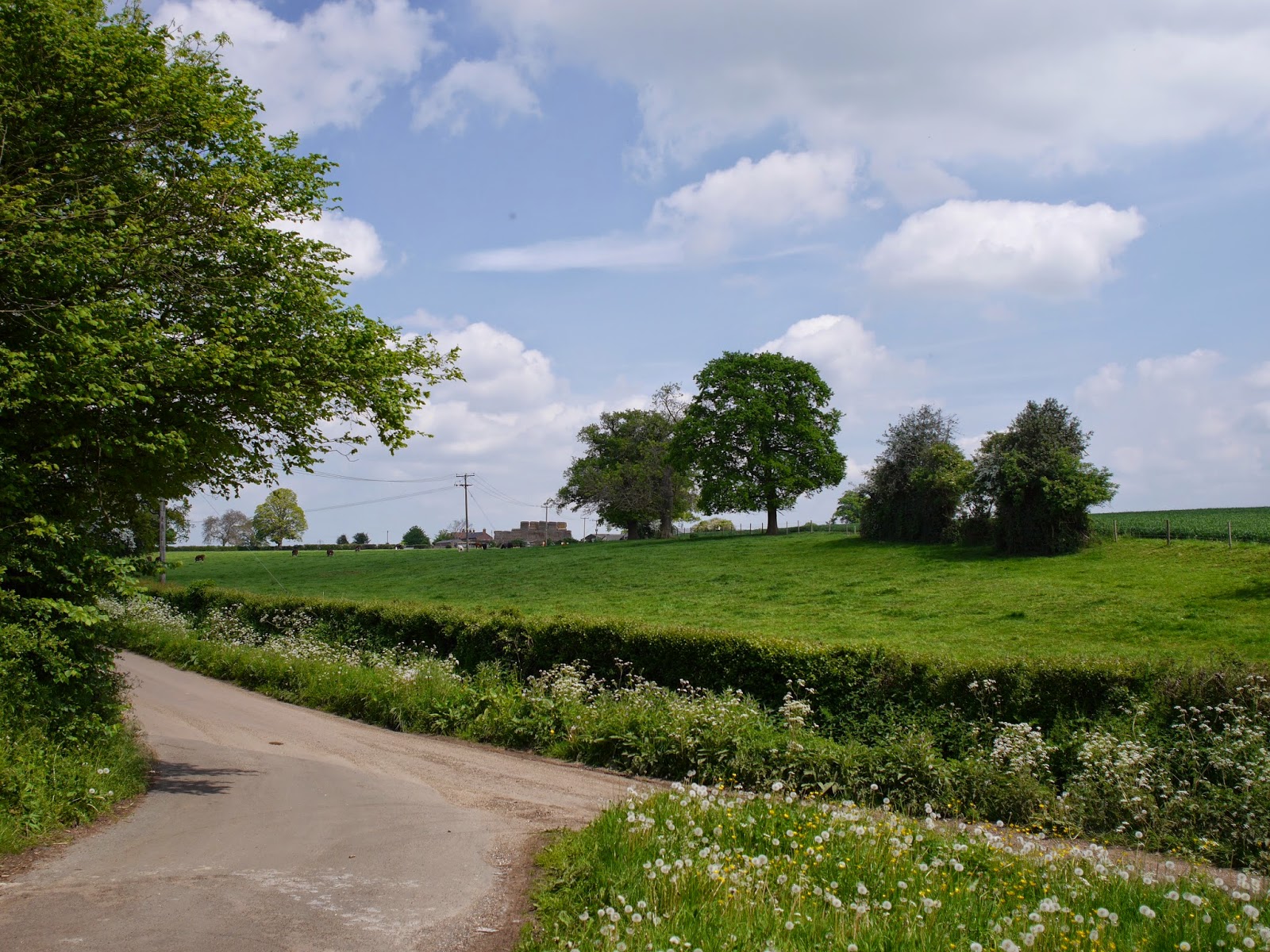 The first rest stop came at about 30 miles. It was a well organised affair. Large containers of water were available for one to fill up water bottles and a range of snacks were generously provided. I took my new Monkii Cage water bottle carrier with my and I have to say it was a godsend. More on that another time.

Up to the 30 mile point it had been a rather hilly route, beyond it things got worse! It was also the point after which the group naturally split up as we knew it would inevitably do. For dozens of miles I didn't see any of my fellow riders. I had loaded the course on my Garmin Edge 810 and was following its turn by turn directions. The route was marked with arrows buy it was nice to be alerted of turns. I have always found using this function difficult but was just about able to cope with it.

Stupidly, I took a camera with me. I have already mentioned that the scenery was stunning. Even more stupidly when I could not resist temptation, I would stop, part fold the bike and take some photos. I took photos of dandelion clocks, bluebell woods, quaint little villages, hedgerows and lone trees in the middle of vast fields. I am ashamed to say that in addition to photographs I also took the time to video bluebells swaying in the breeze, my Brompton with said quaint village in the background and even a selfie! As I type this I do find it ridiculous but at the time I was enjoying myself. 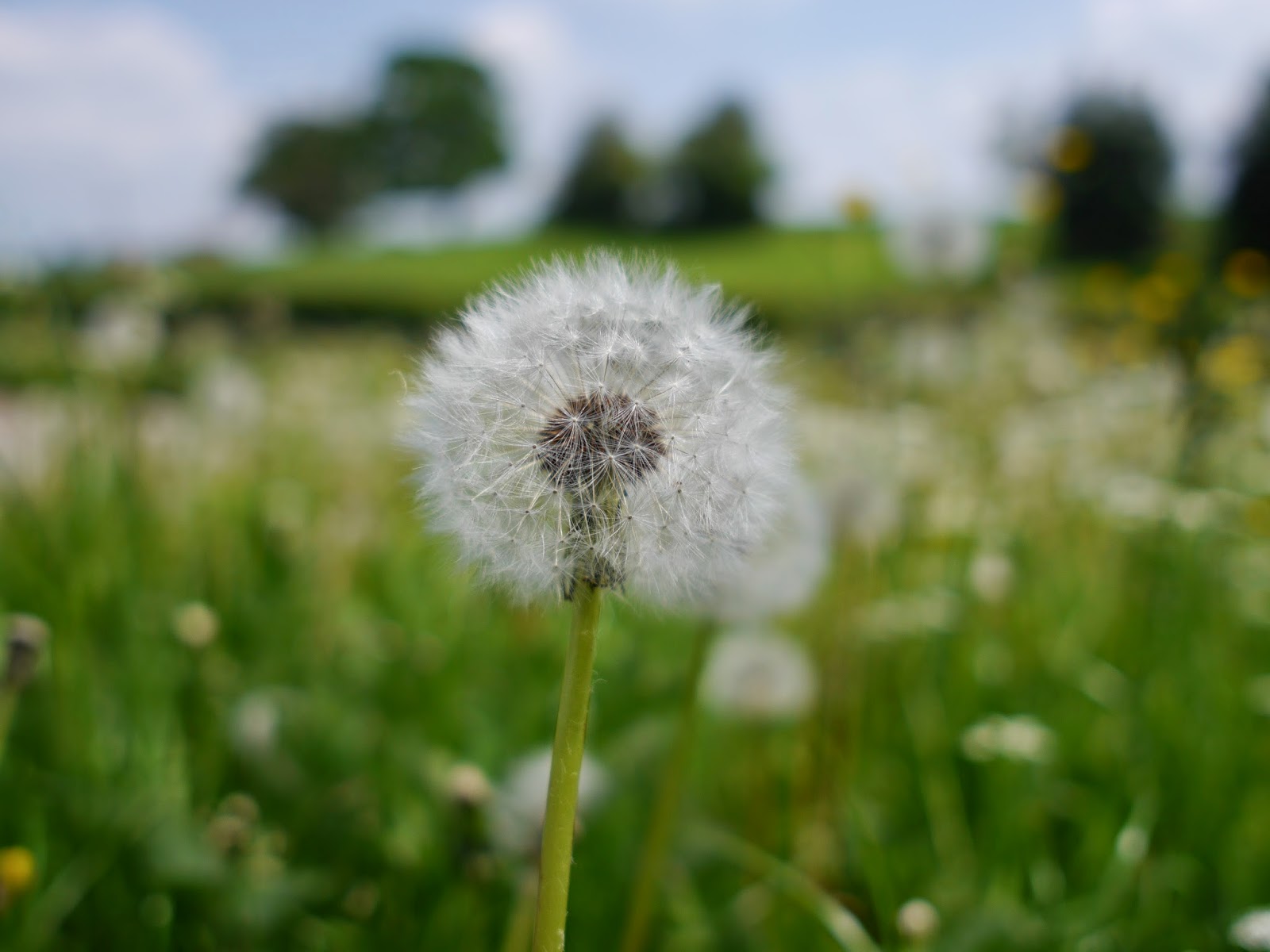 The tree below and the alpacas I took while Geoff and Anne looked on. It was a stupid thing to do and I should have just kept on instead of stop starting. 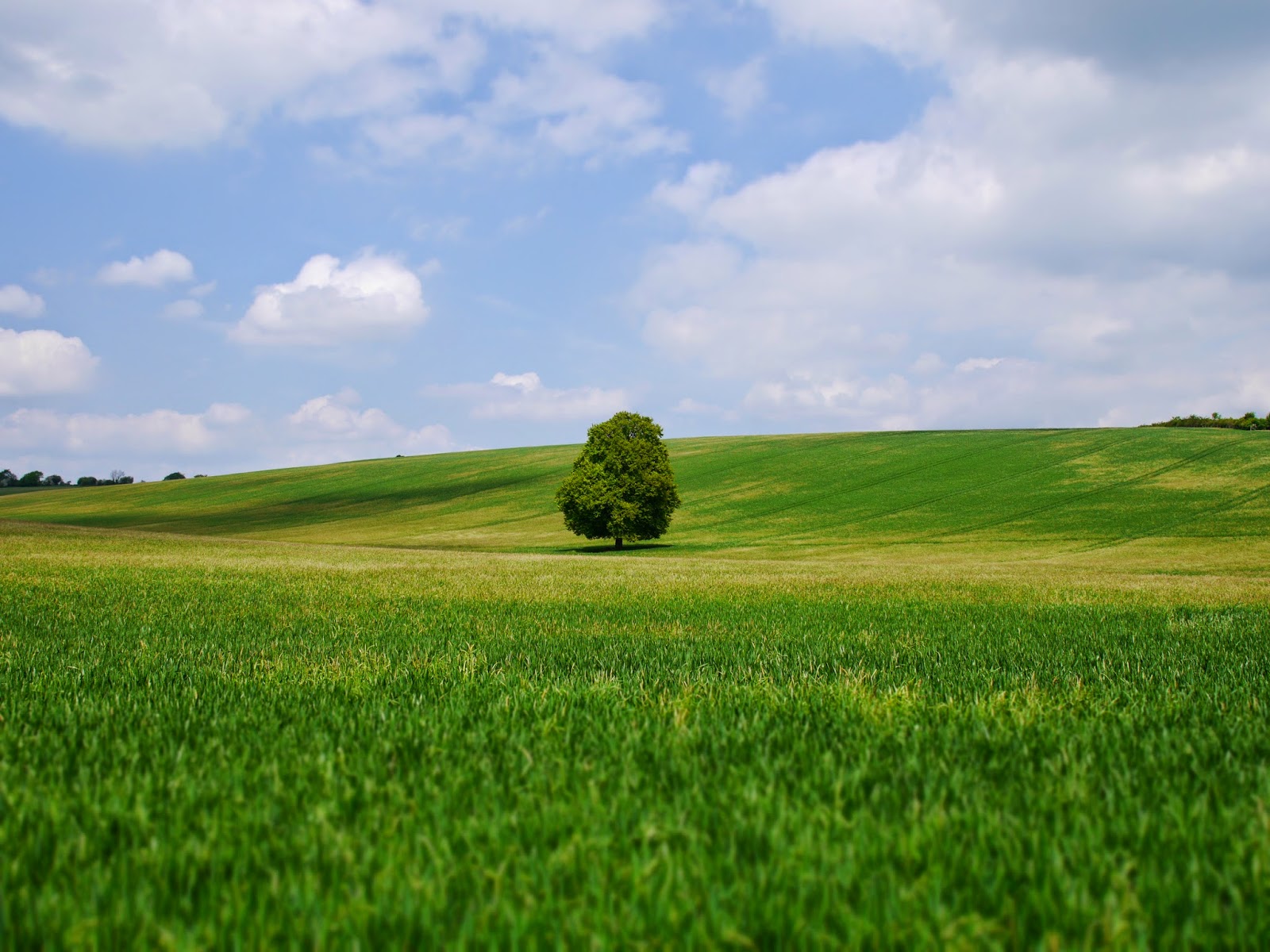 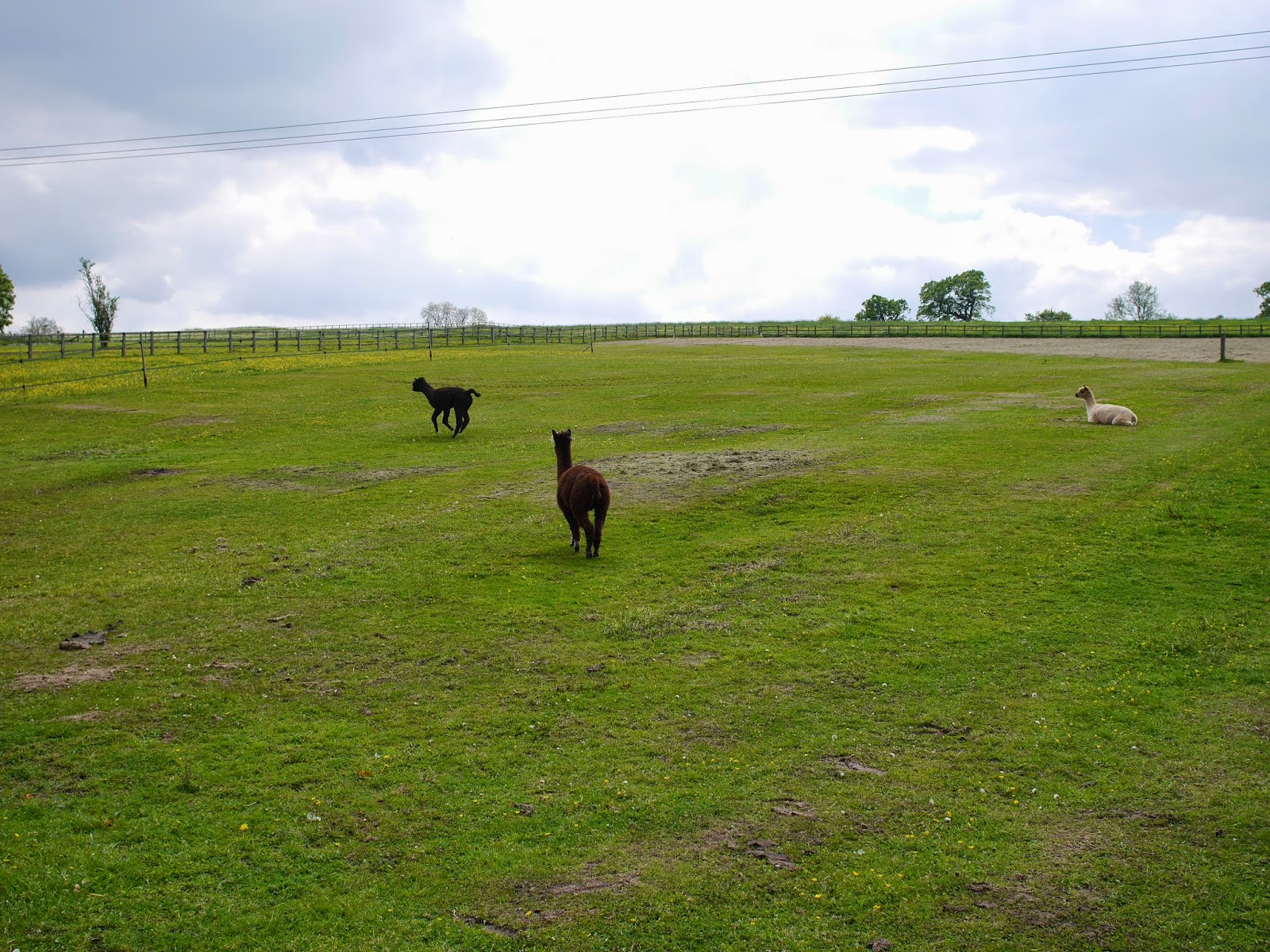 At about 50 miles or so we saw a support van with a yellow glove waving at us from inside. It was Andrew and unfortunately for him he called it a day after only 41 miles. I was surprised that he was not able to go further as he looked good when we rode together at the Thames Bridges ride. I also felt rather sorry for him as his Brompton bike had the indignity of travelling more miles in the back of a van than Andrew had completed on the road. In addition paying out all that money for the the two days and overnight stay, he was to return back to London with us. 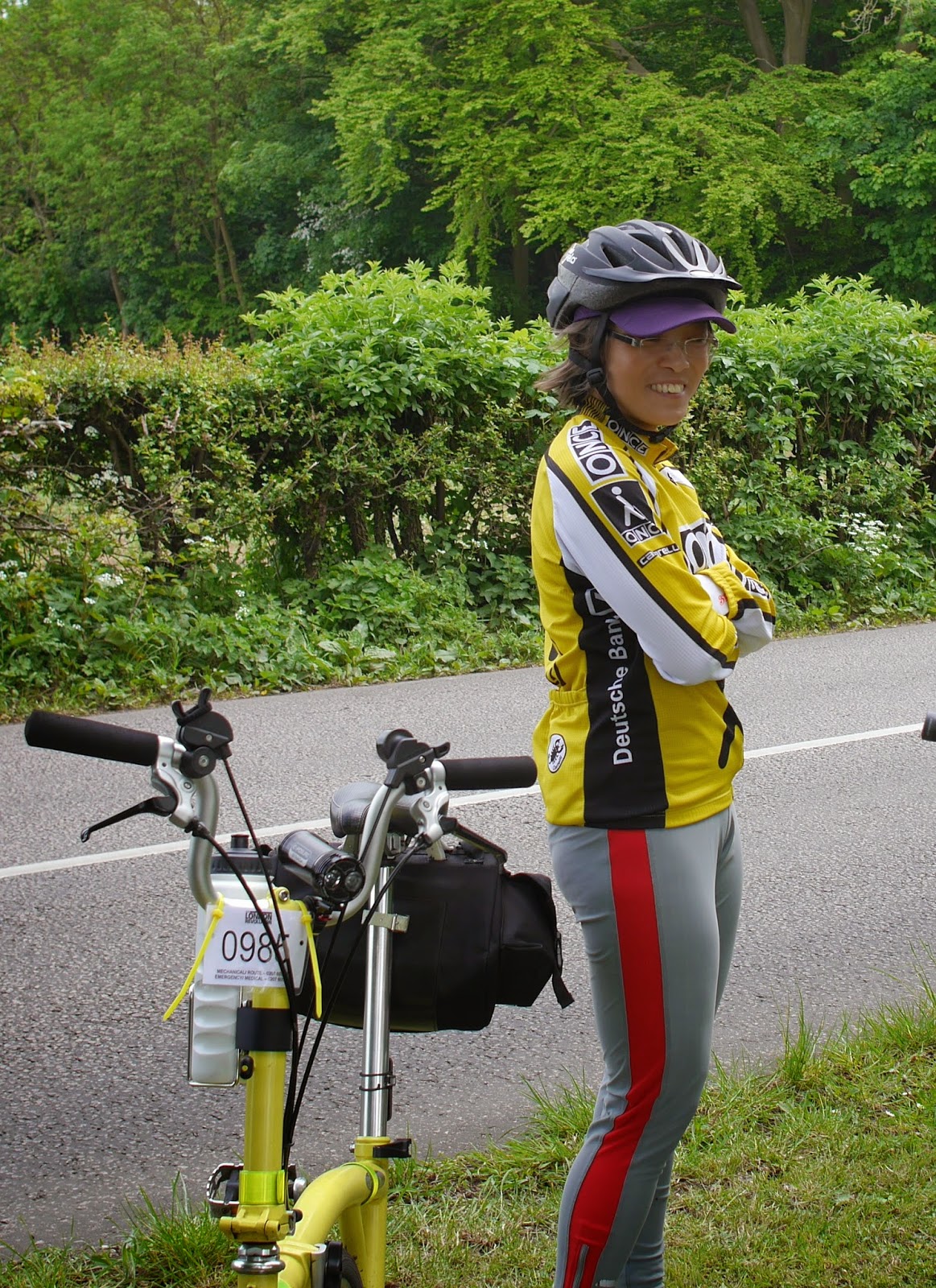 We regrouped at the 70 mile point at another refreshment point. By this time the hills had been pretty bad. There were some huge bergs to ascend and they were by no means easy. I felt tired and needed more water than I had, perhaps as it was such a hot day. 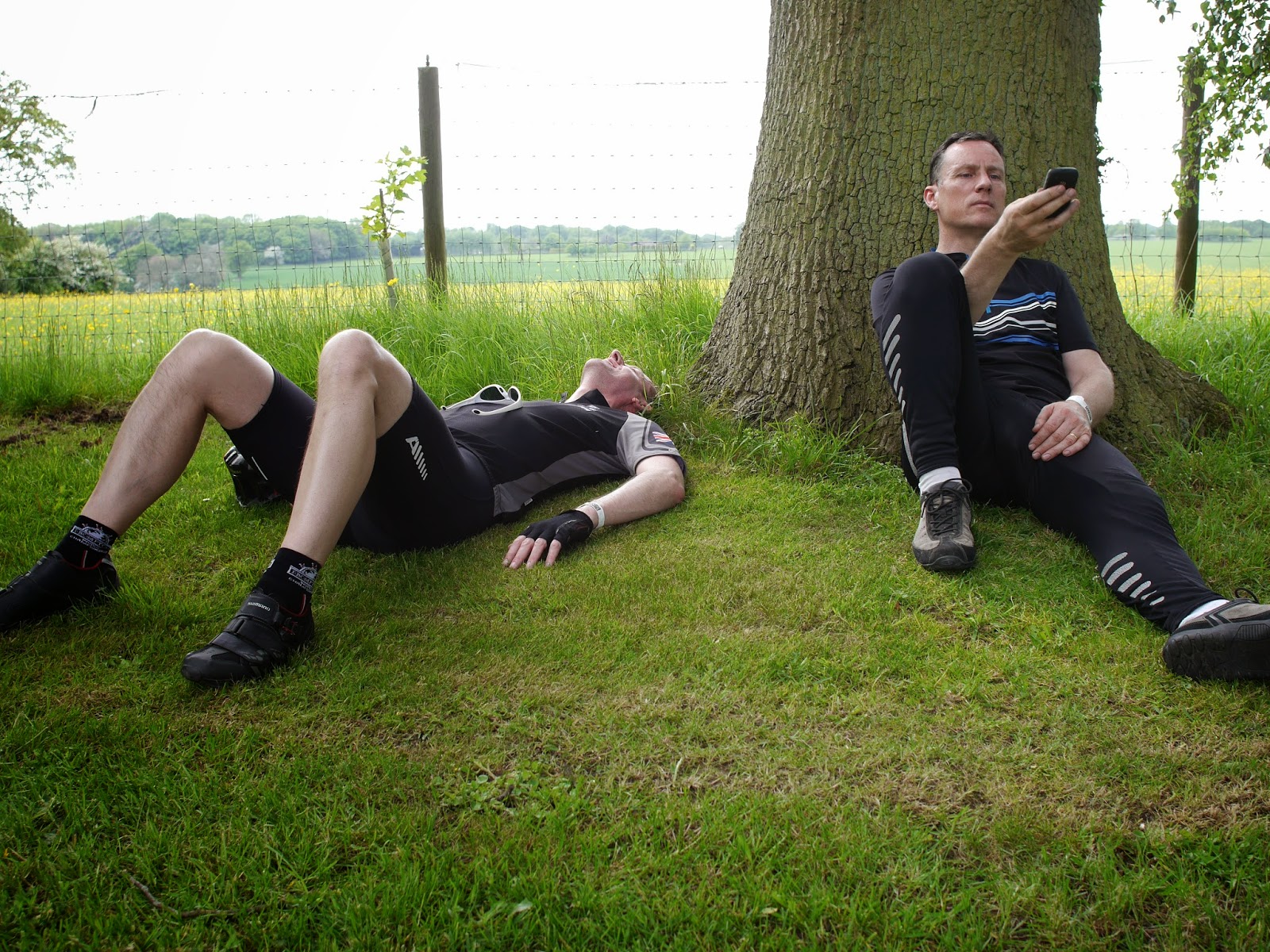 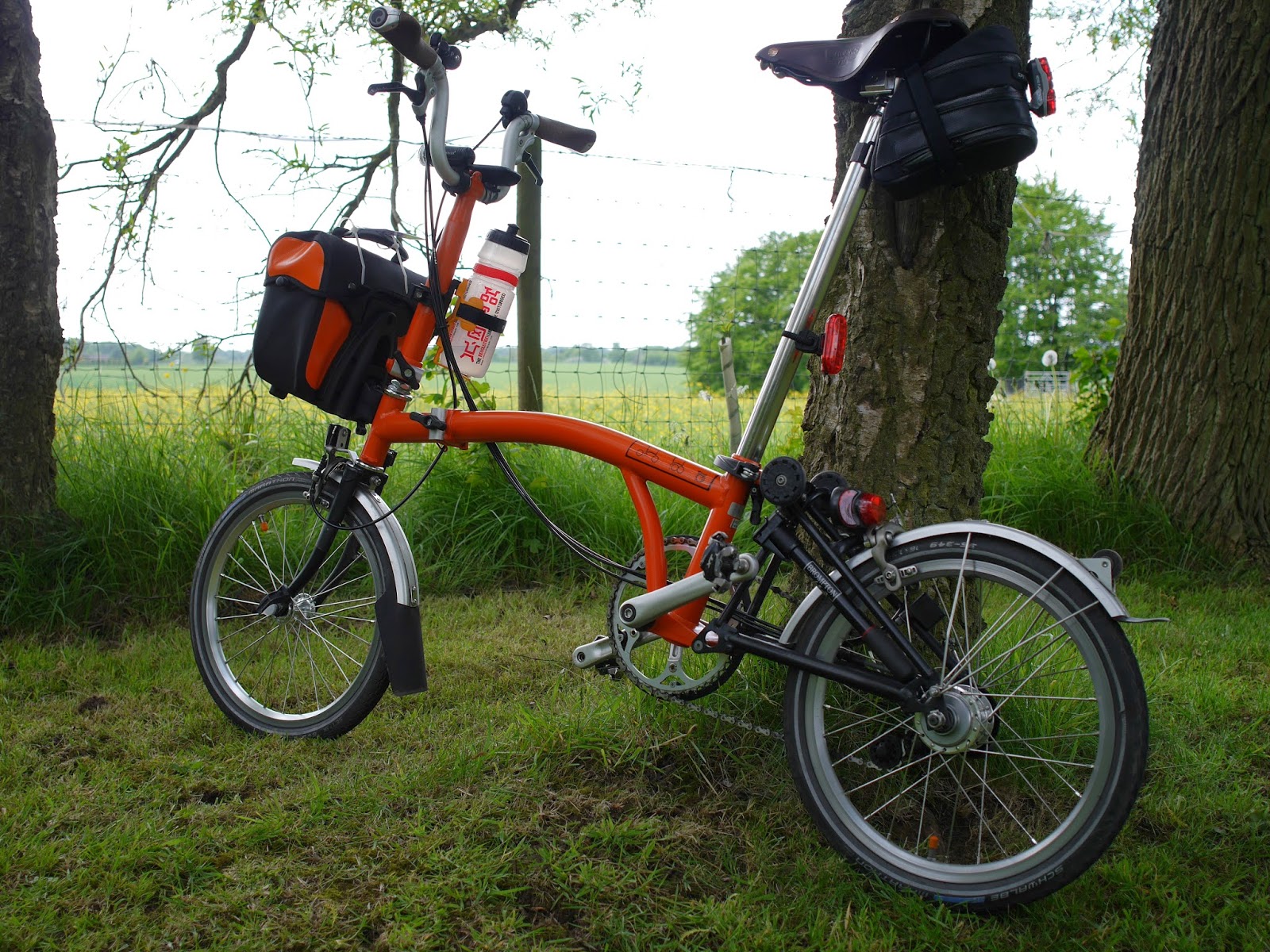 The photo below was the last time we were together until the end of the ride. We were again to go our separate ways and at our own paces. David and Guy looked strong and were soon off into the distance. 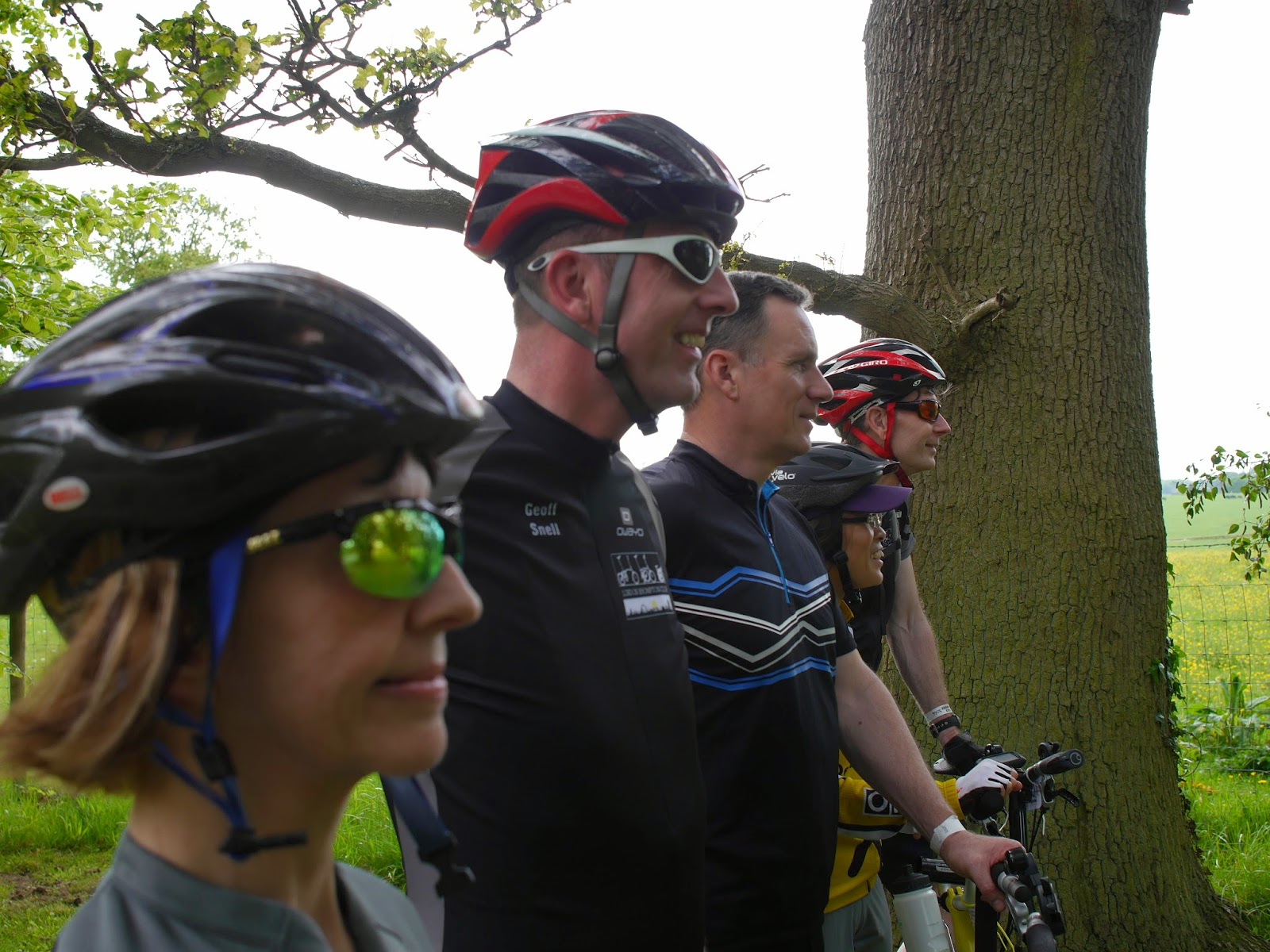 The last 30 miles were both long and hard. There was an horrendous hill just after Marlow that was a killer. I attempted to ascend and not give up but soon realised that my legs didn't have it in them and if I did attempt it, they might not get me the 100 miles!

I occasionally saw Jenny who looked strong, certainly stronger than me. When I saw that my Garmin was showing 95 miles I got my second wind and pressed on.

As I neared the finish I could not believe that I had finally done the 100 miles in a single day. I was also truculent, wanting to see my wife and daughters, hungry and thirsty. I openly vowed that I would not do this event again (I probably won't) and was done with huge distance events such as the Dunwich Dynamo! The ride was demanding and I felt it!! I vowed to have my next ride as one where I ride, chat, take photos and consume a cream tea!

This morning, after a good nights sleep, being greeted by my wife and daughters excited that I had done the 100 miles (well Mrs Orange still thought I was mad to do it) I felt pretty good. I suffered no ills. The legs appeared good, as did the rest of me and I was shocked at this realisation.

As I looked at the medal given to me yesterday, viewed the many photos of bluebell woods, quaint villages etc.., the memories of the day came flooding back. I mulled over what I would do next time in terms of equipment and strategy. Would I take my Titanium S type instead? Would I buy a hydration bladder as Andrew had done? Would I do it again? The answer is...maybe? 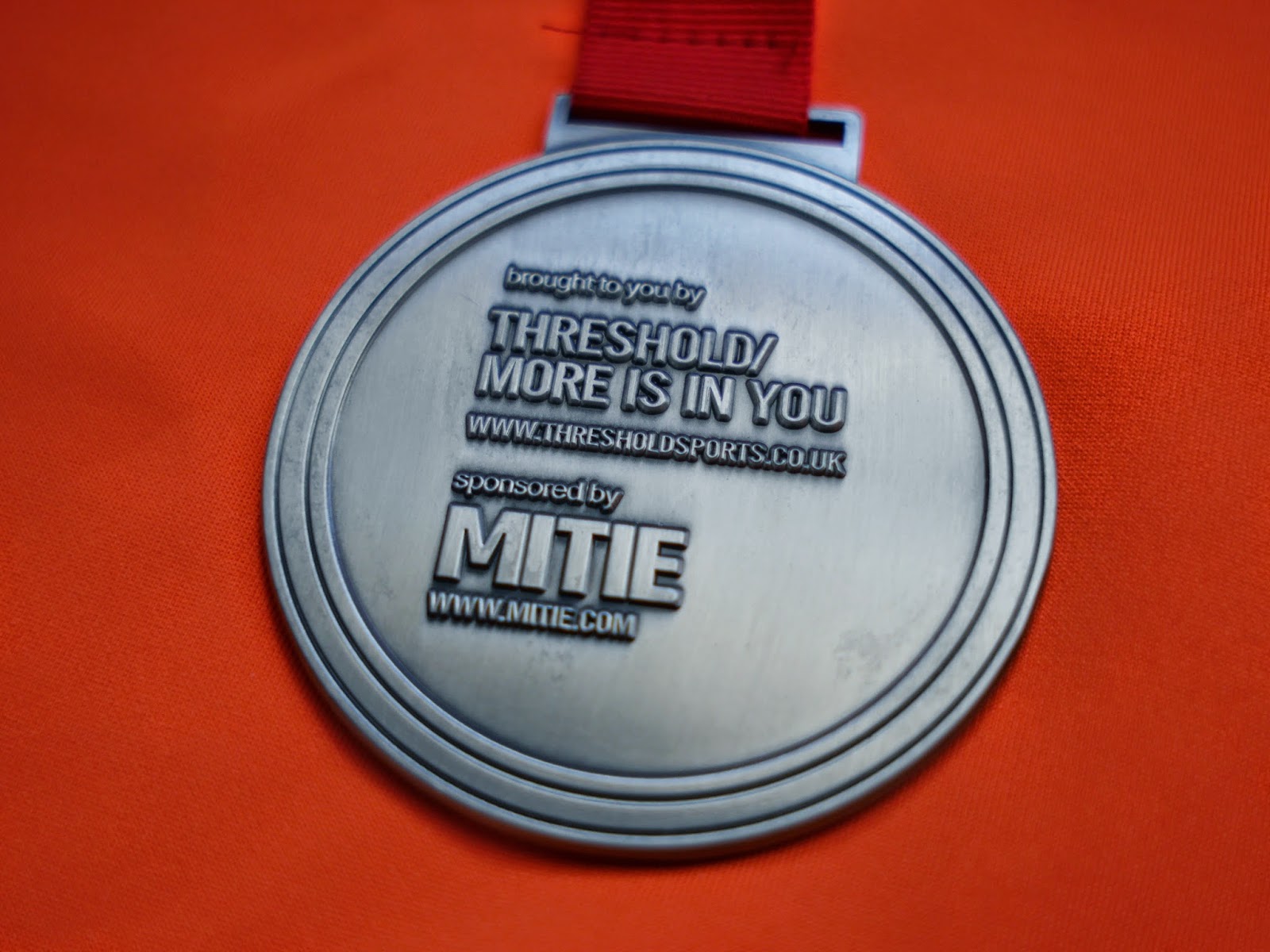 The constant is that it would be done on a Brompton. I think we did Brompton proud. We showed that a bunch of eccentrics on small wheeled bikes could take part in an event like this. We proved that our little folding wonders are more than just a commuter hack. The Brompton riders that completed the 100 miles were by no means the last to finish and I think all of us did well to have a go. 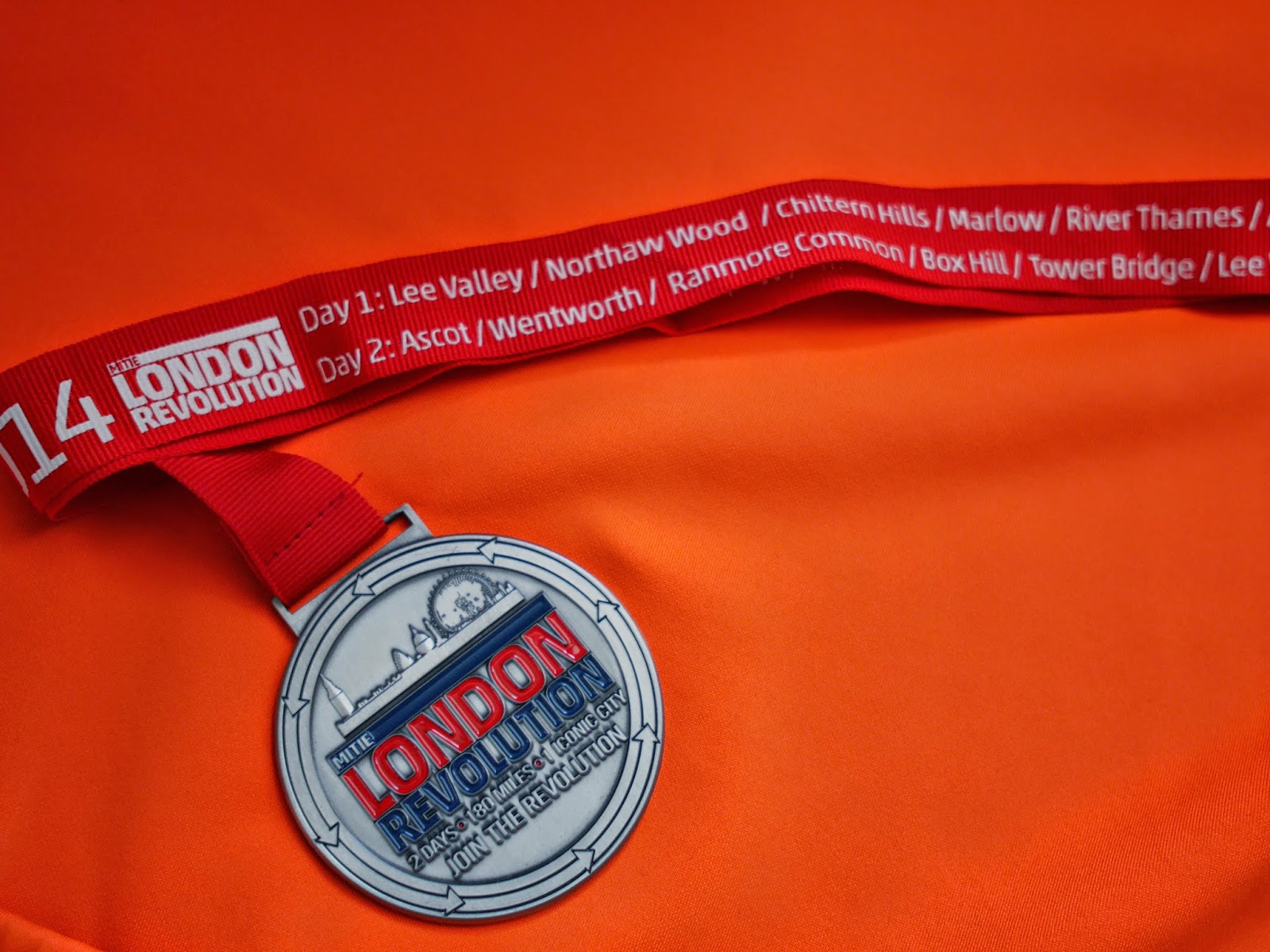 There is of course the question I keep coming back to. Would I do something like this again? Well, never say never. The one certainty, is that if I do it will be on an Orange Brompton.
Mitie Revolution map and ride data
at May 18, 2014