Getting lost on a Brompton in London

This morning I had arranged to meet my cycling Partner Andrew for a daytime resume of the popular ride, 'Docklands by Dark.' Yesterday we had both downloaded David's route onto our respective Garmin devices and looked forward to riding together and seeing this route in daylight hours.

The meeting point was the London Eye. I got off at Waterloo and things didn't bode too well as I got lost trying to negotiate the exit nearest to the London Eye! Luckily I didn't have to admit defeat and resort to plotting a route on the iPhone and soon found my way.

Andrew was already there and after loading up the route, we set off. We got about 30 metres before having to stop - mainly due to yours truly not having the slightest clue where to go or how to properly work my Garmin!


After some tinkering we got going and vaguely followed David's route. The weather was glorious after the past few days of rain to the extent that Andrew brought out his best camera. We quite happily took lots of photos and despite this were covering the ground pretty well. 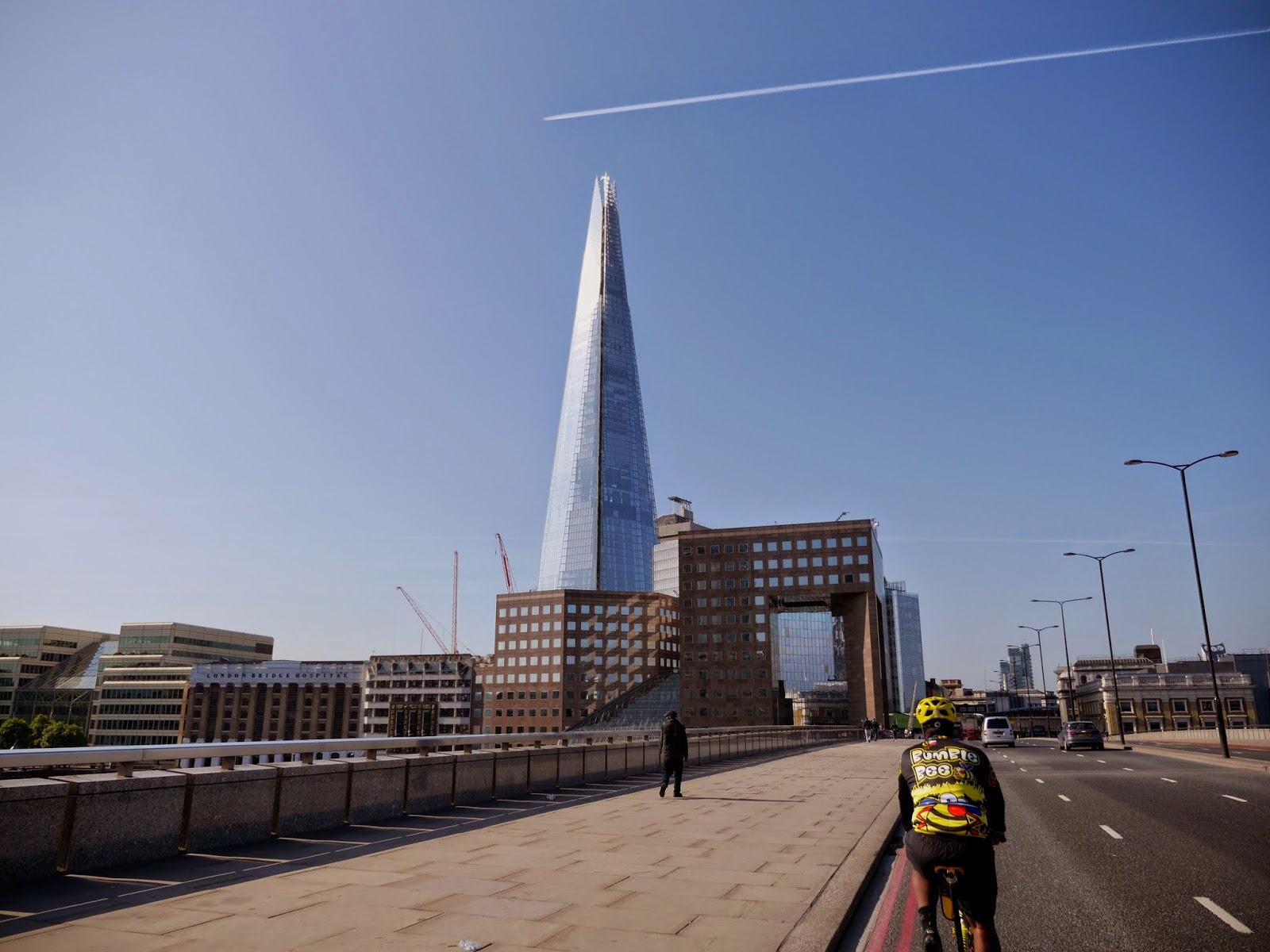 Stopping adjacent to City Hall designed by Norman Foster we were treated to some daytime views of some of London's finest views. It was so bright at times that taking photos proved to be a challenge. We should of really had filters to cope with this - next time perhaps - but we did our best. 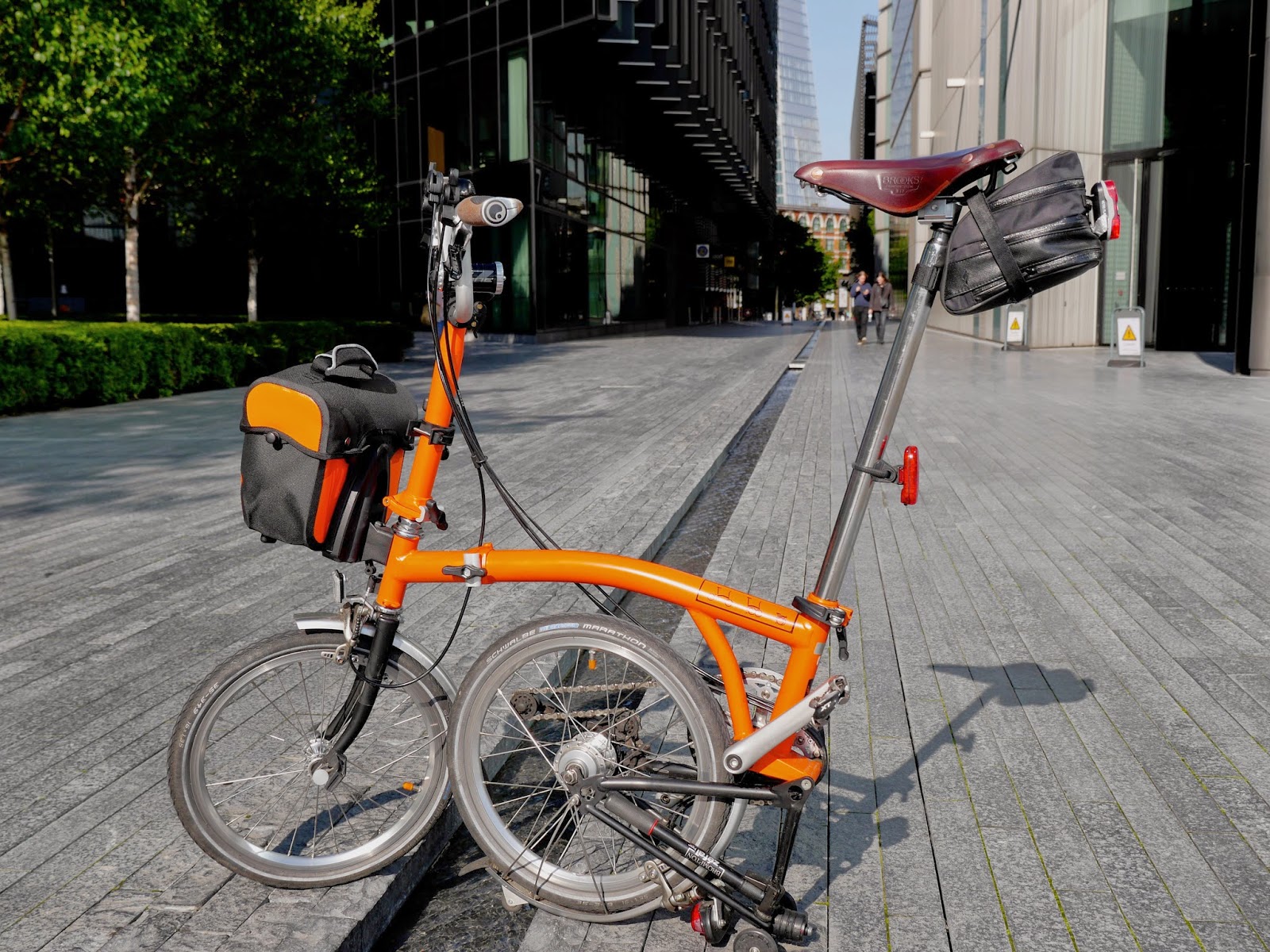 In the floor water jets rose in an unpredictable pattern. I did my best to try and time taking a picture of my Brompton when they shot up. 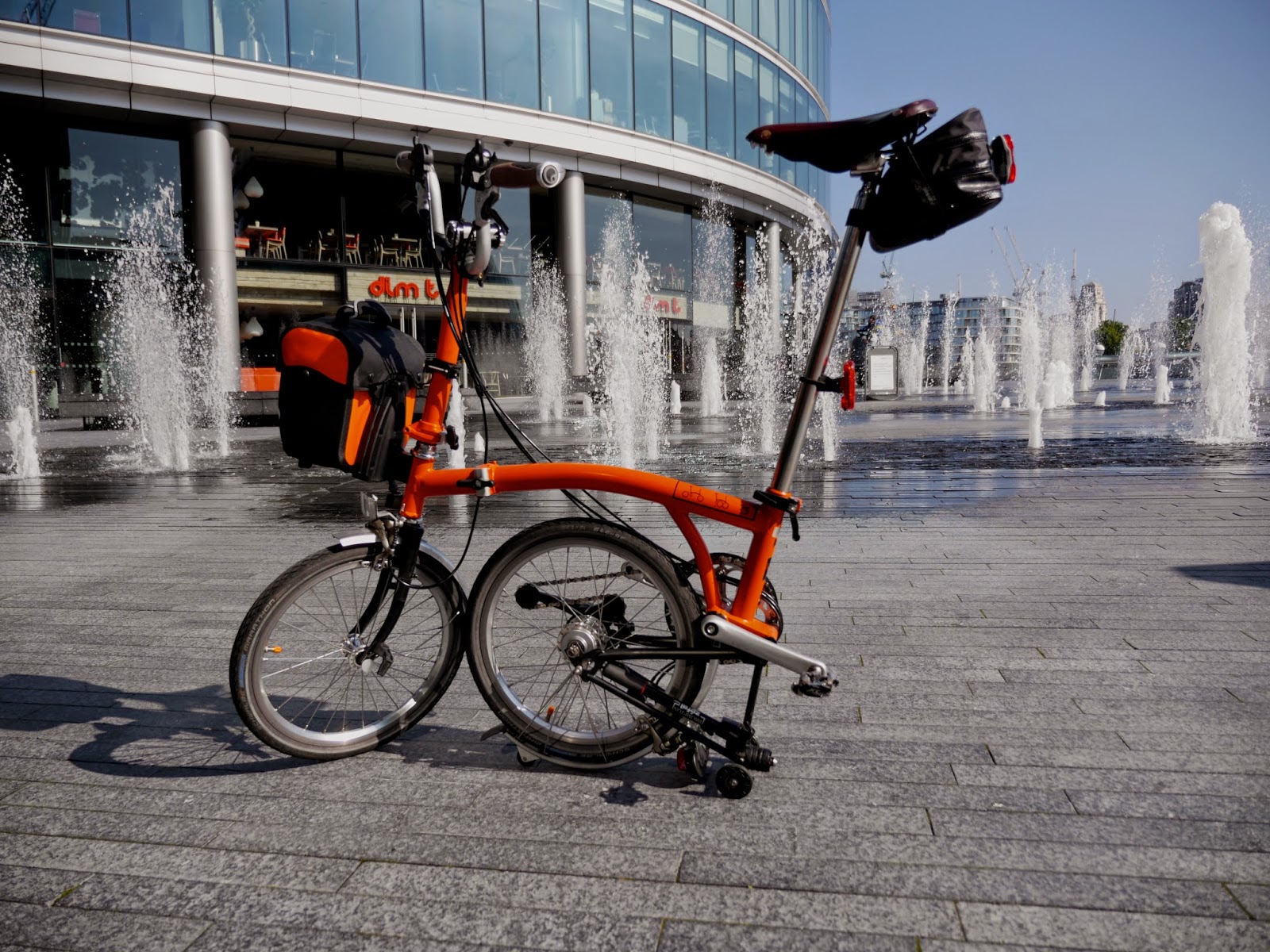 At this stage we hadn't got too far into the route but were nonetheless enjoying it all. We were occasionally getting lost but it didn't really matter and was part of the fun. 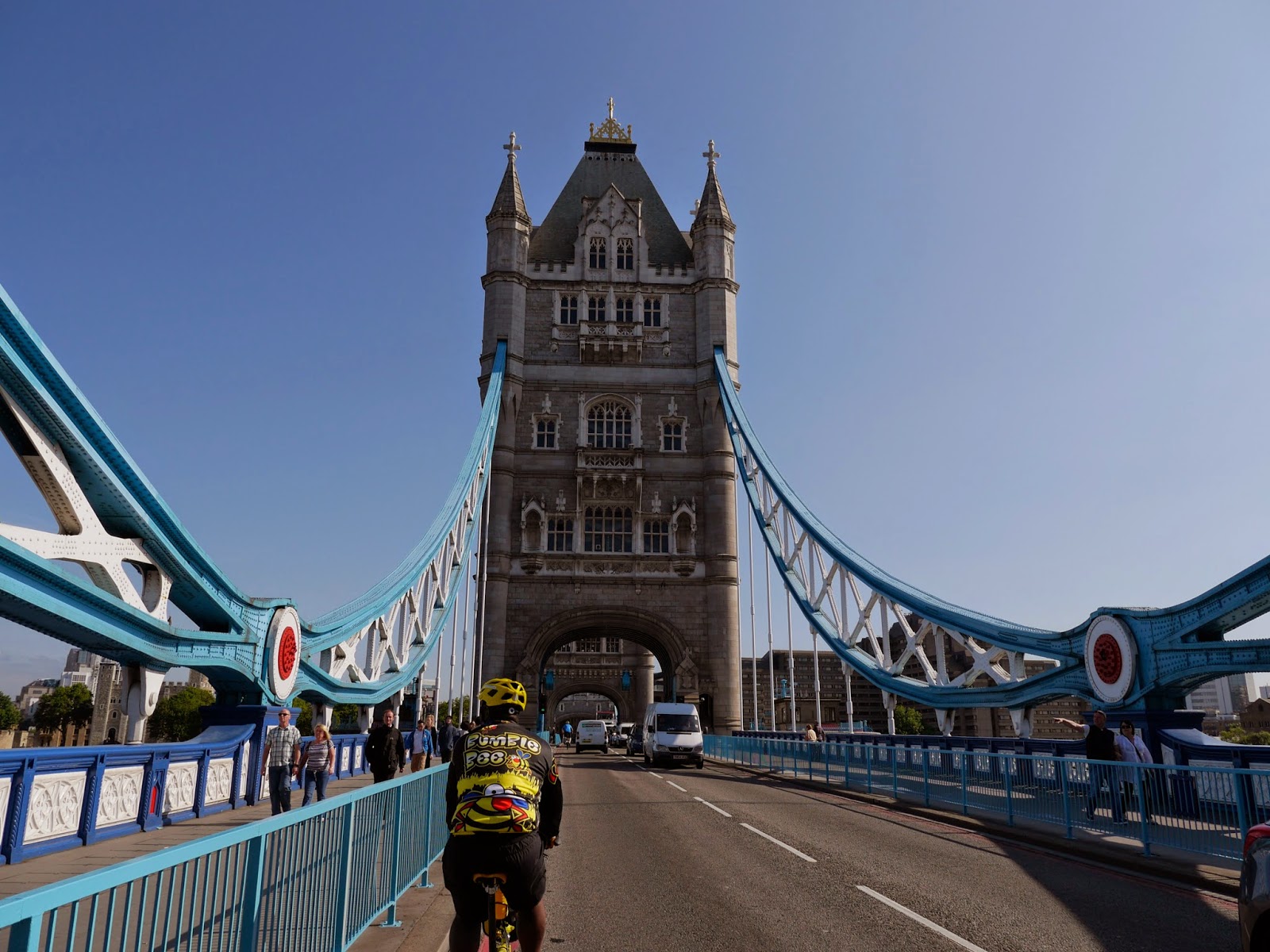 It dawned on me that next week I would be doing the same as the 2014 NightRider is only a week away. Thankfully I feel pretty well prepared and don't really have any worries about the 60 miles...although the reality of cycling this for real might be different. 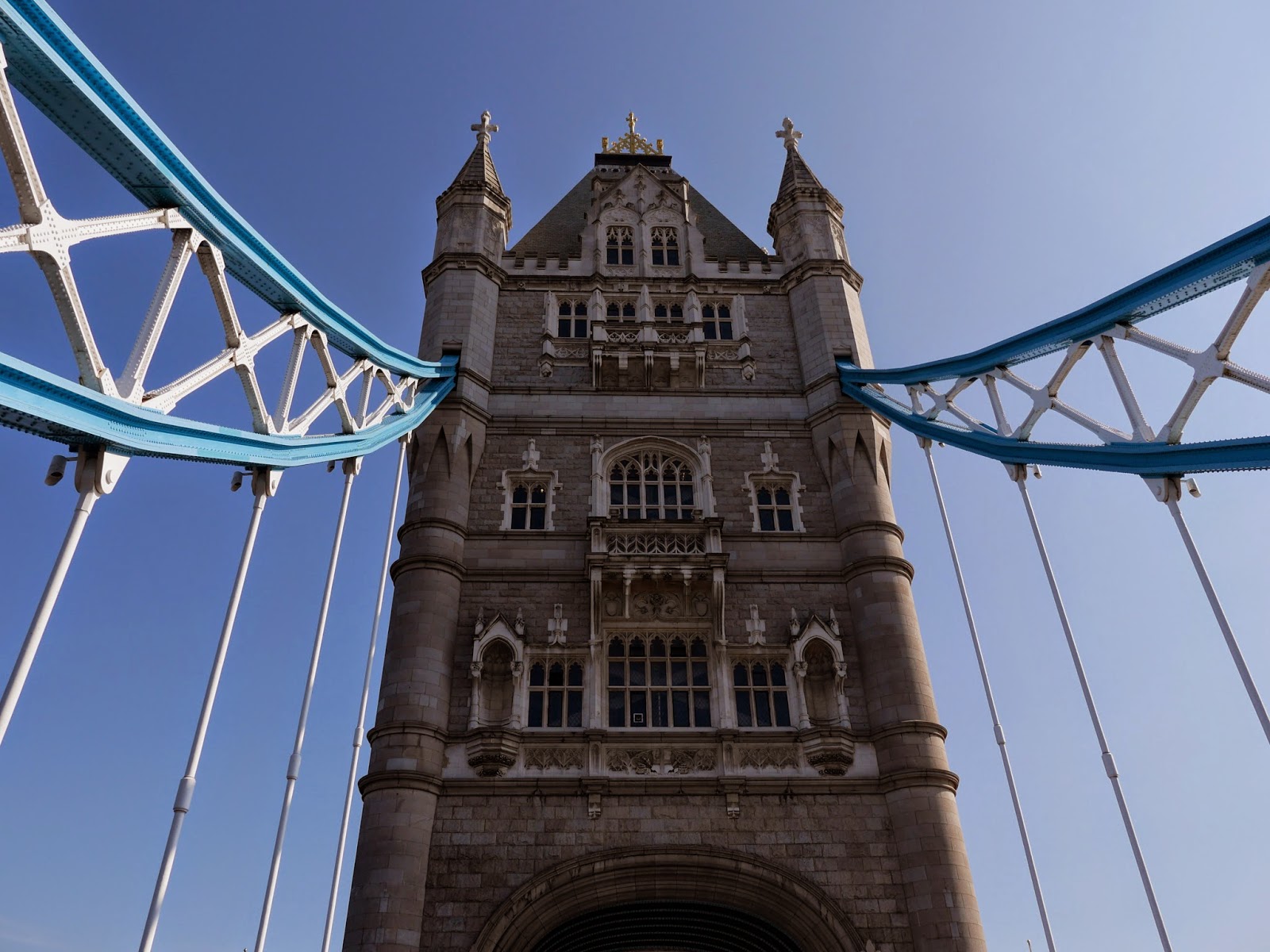 As we turned into one of the many wharfs along the Thames we spotted the 'Gloriana' which like us certainly gets around. We spotted this last on the 'Thames Bridges' ride near Hampton Court and now here in central London. 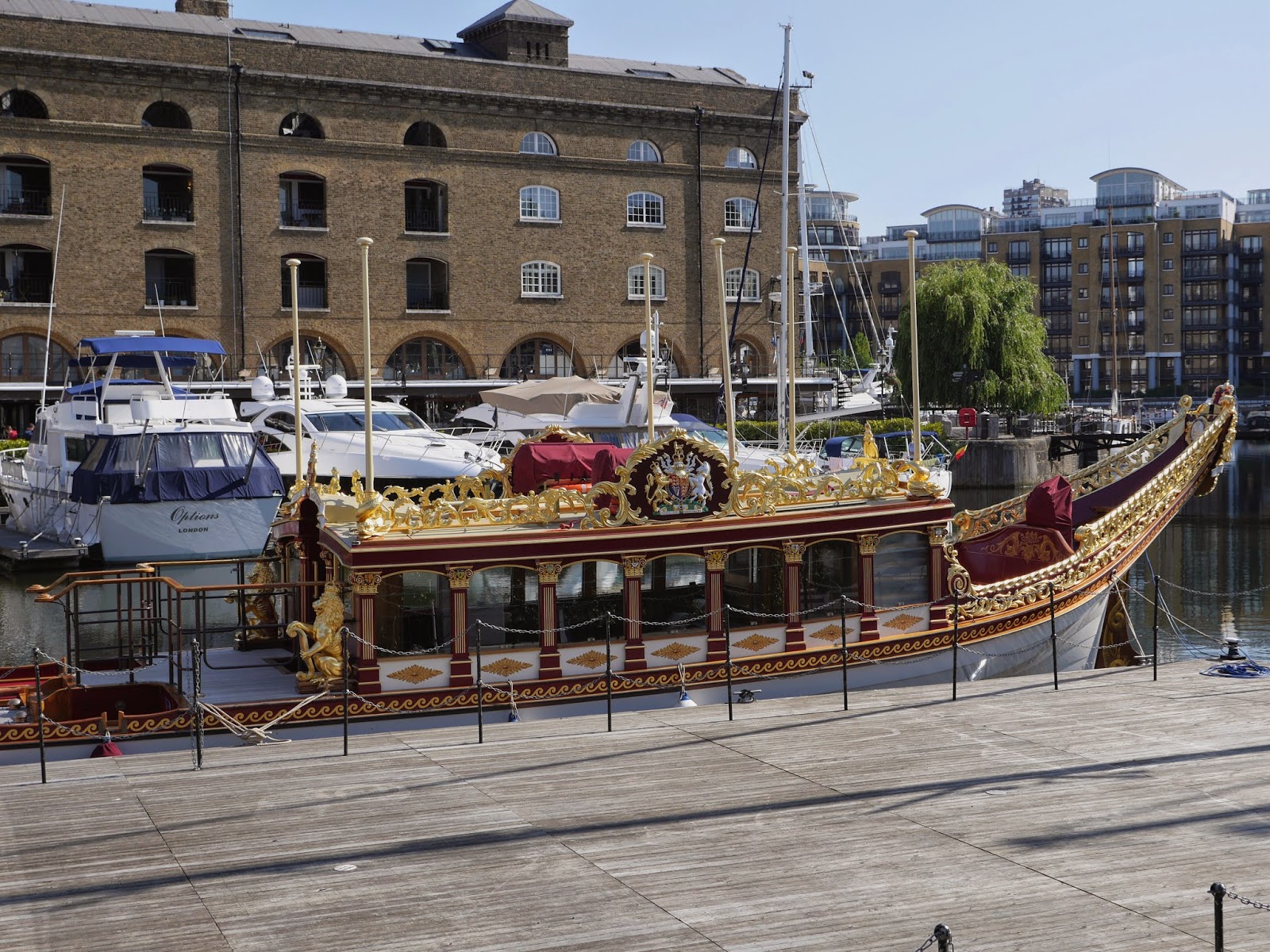 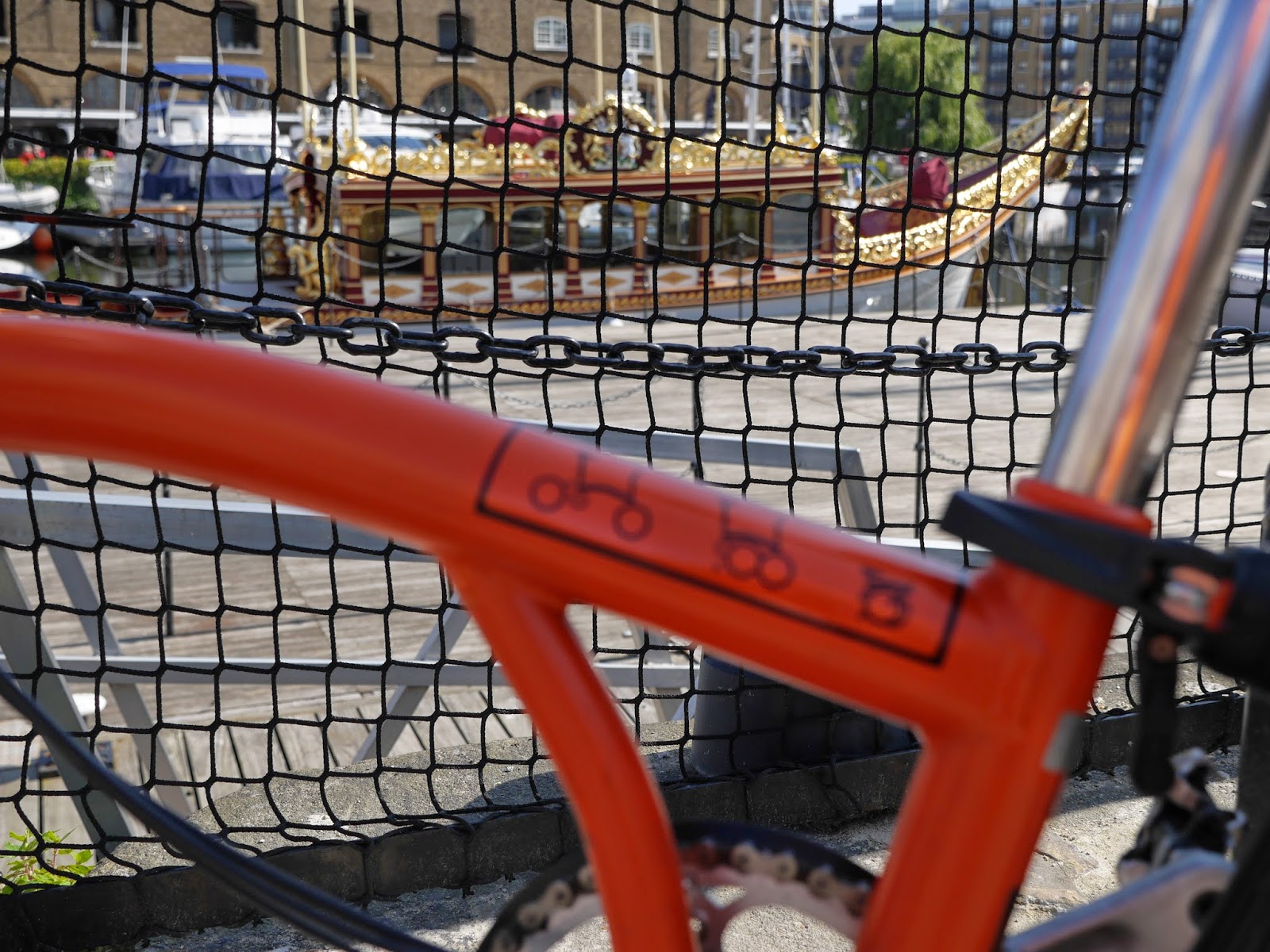 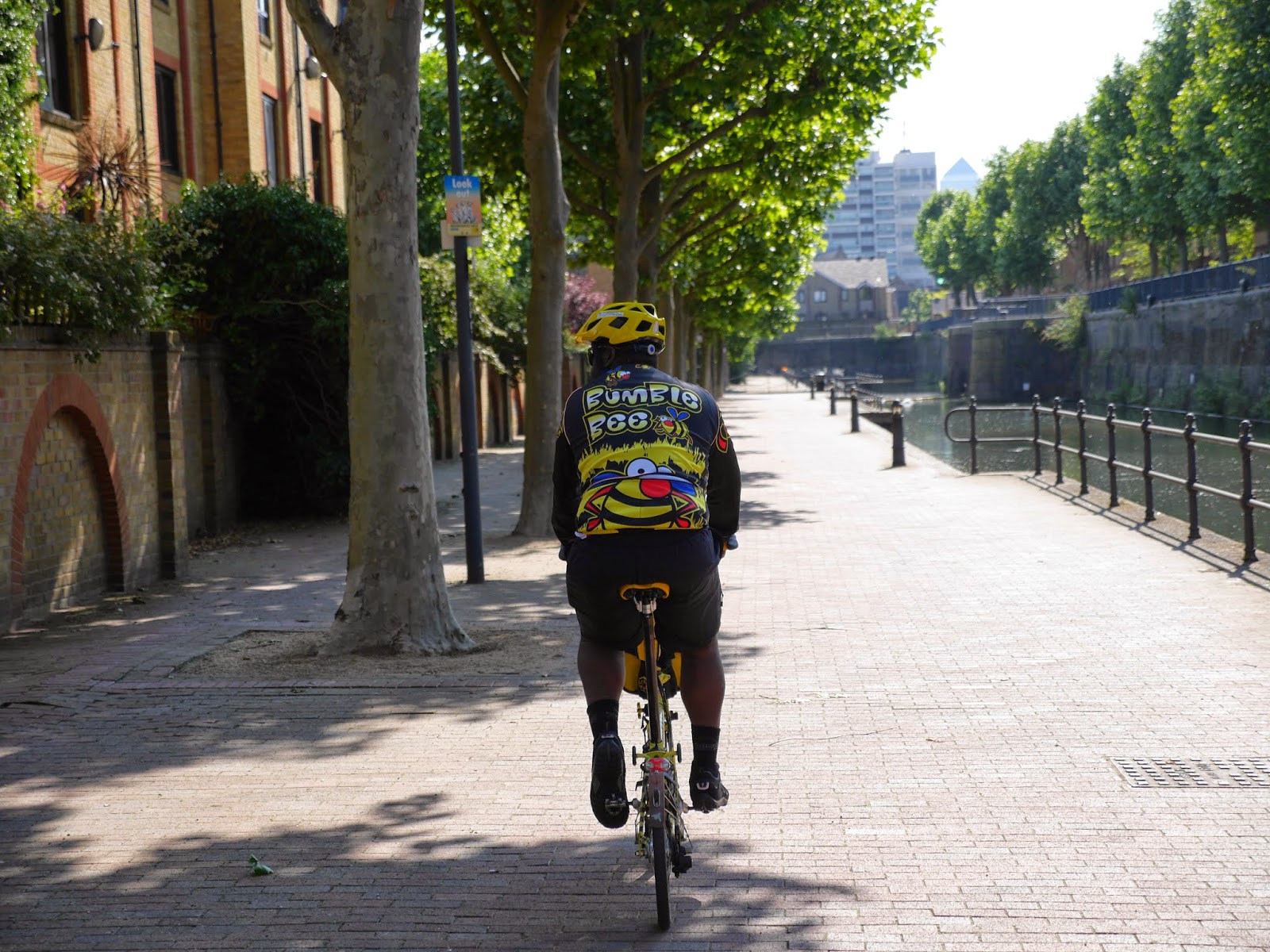 The looming skyline of Canary Wharf was every present in the distance and soon we would be cycling through it. 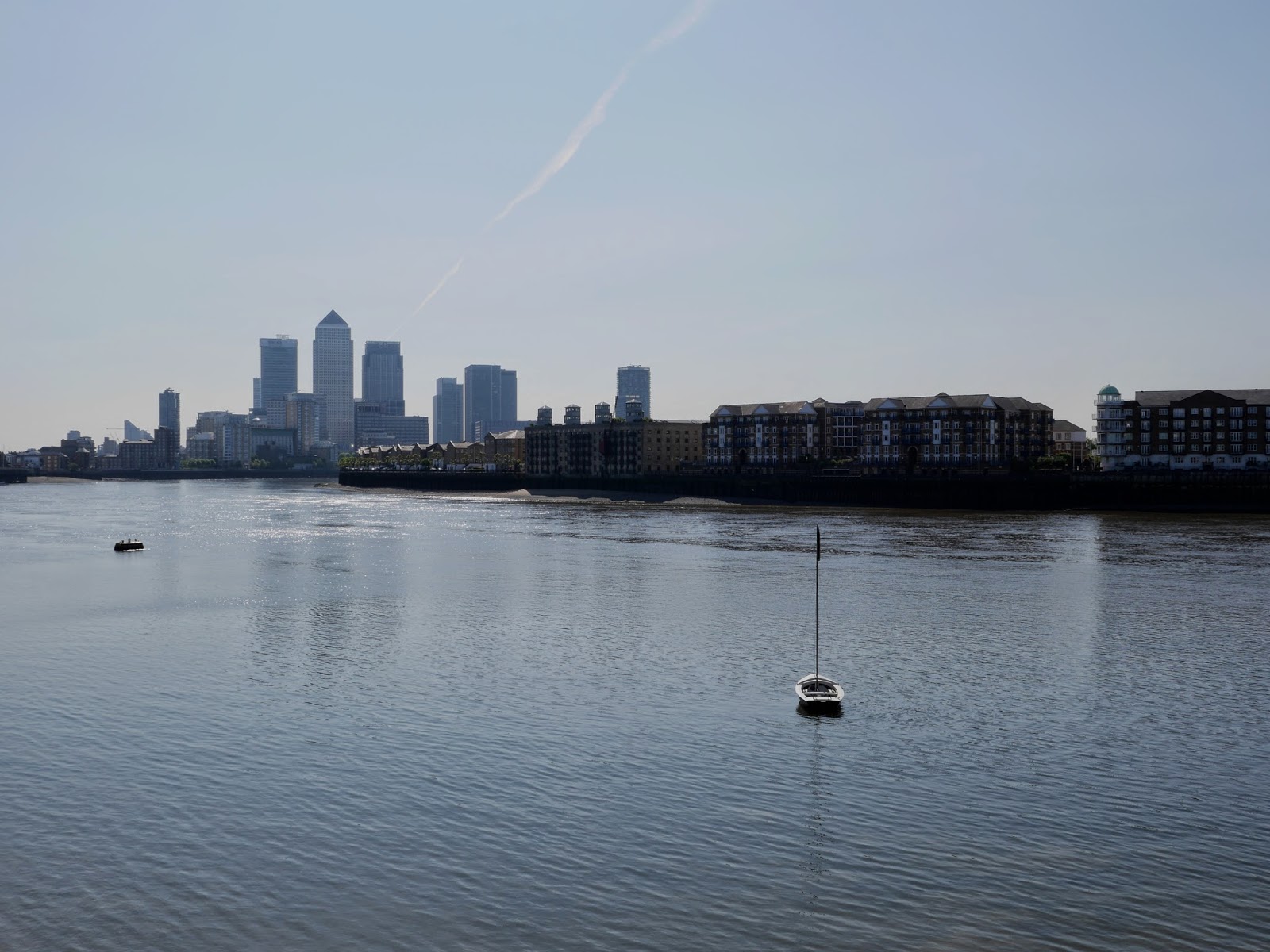 There is something magical about the river Thames. It is beautiful at night of course but seeing it in daylight is always a treat. 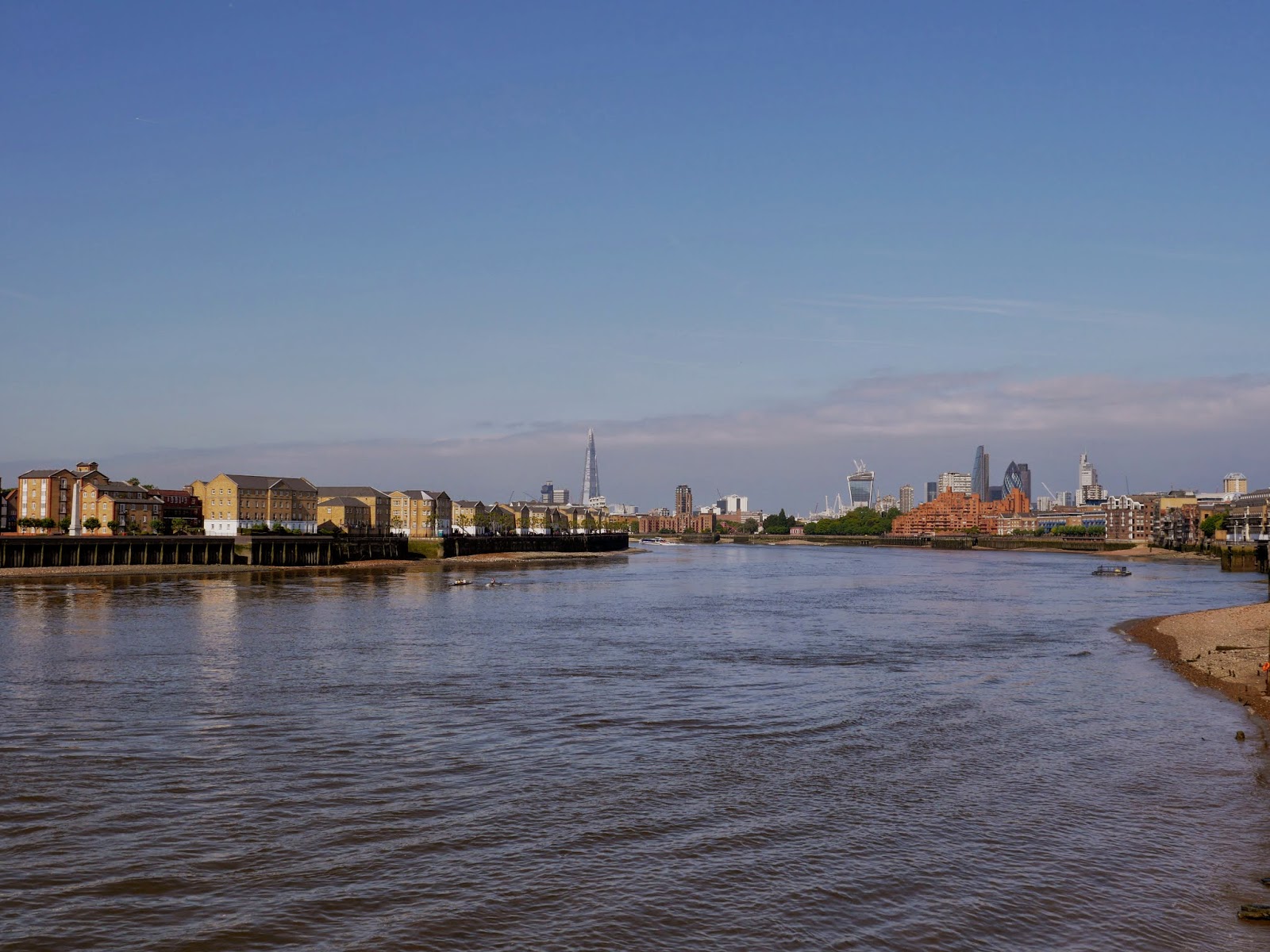 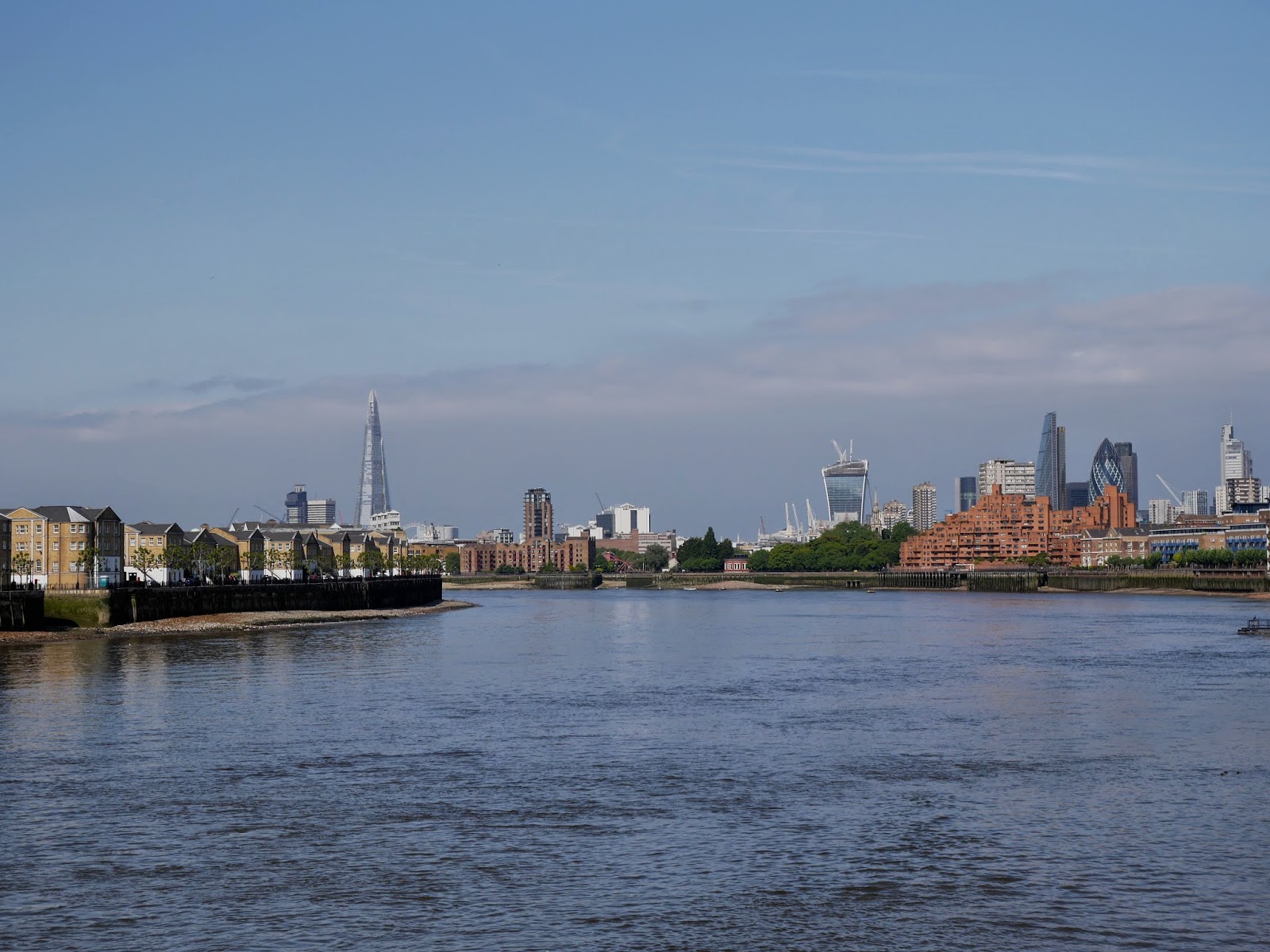 Canary Wharf was fairly quiet and I suspect it would take on a very different aspect on weekdays. Cars were almost non-existent and we had the place more or less to ourselves. 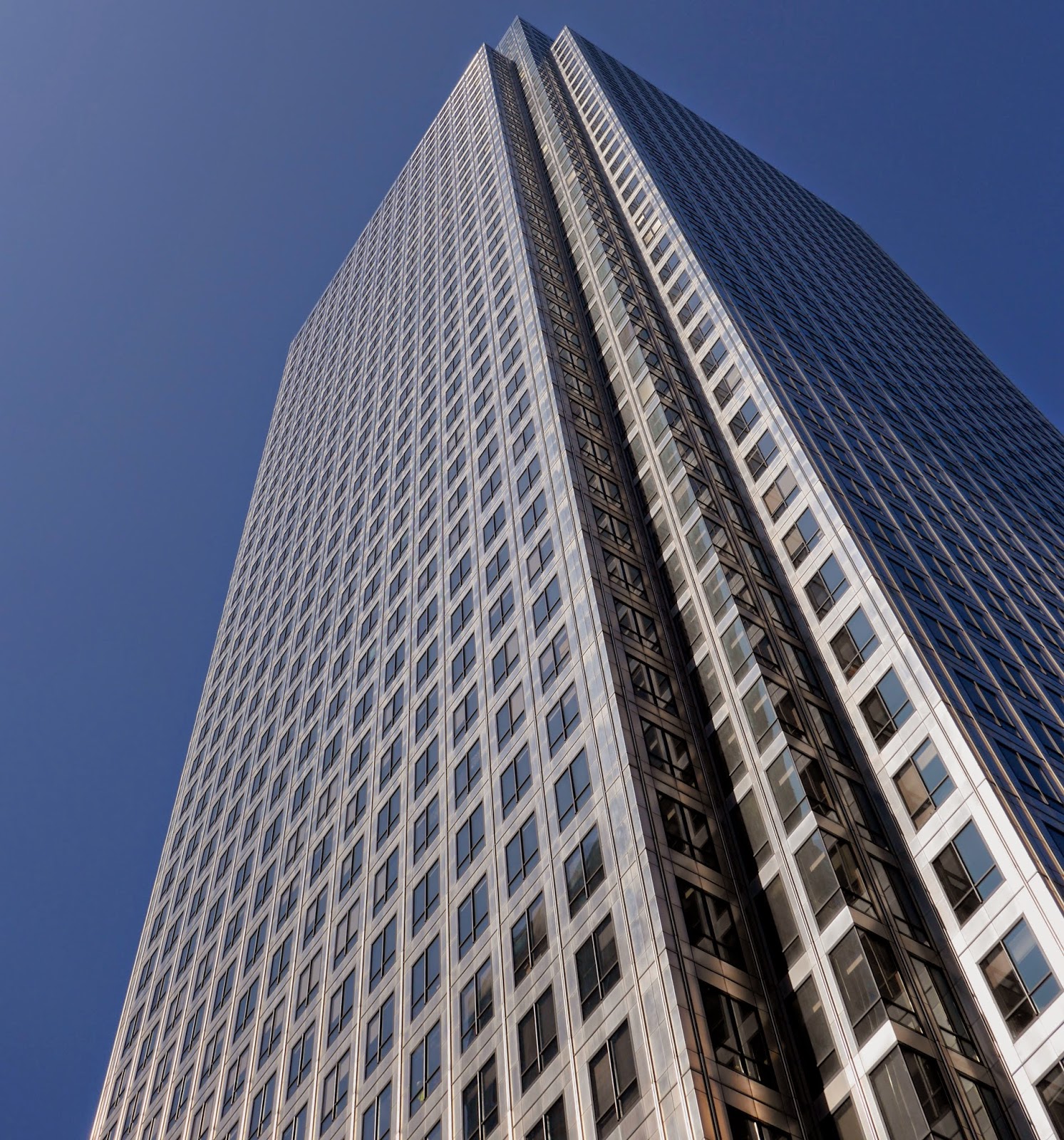 The 'Traffic Light Tree' on the roundabout near Canary Wharf contains over 70 lights controlled by a computer. This always amuses me as the first time I set eyes on it I speculated how on earth I would know to stop or go, not realising it was a piece of public art! 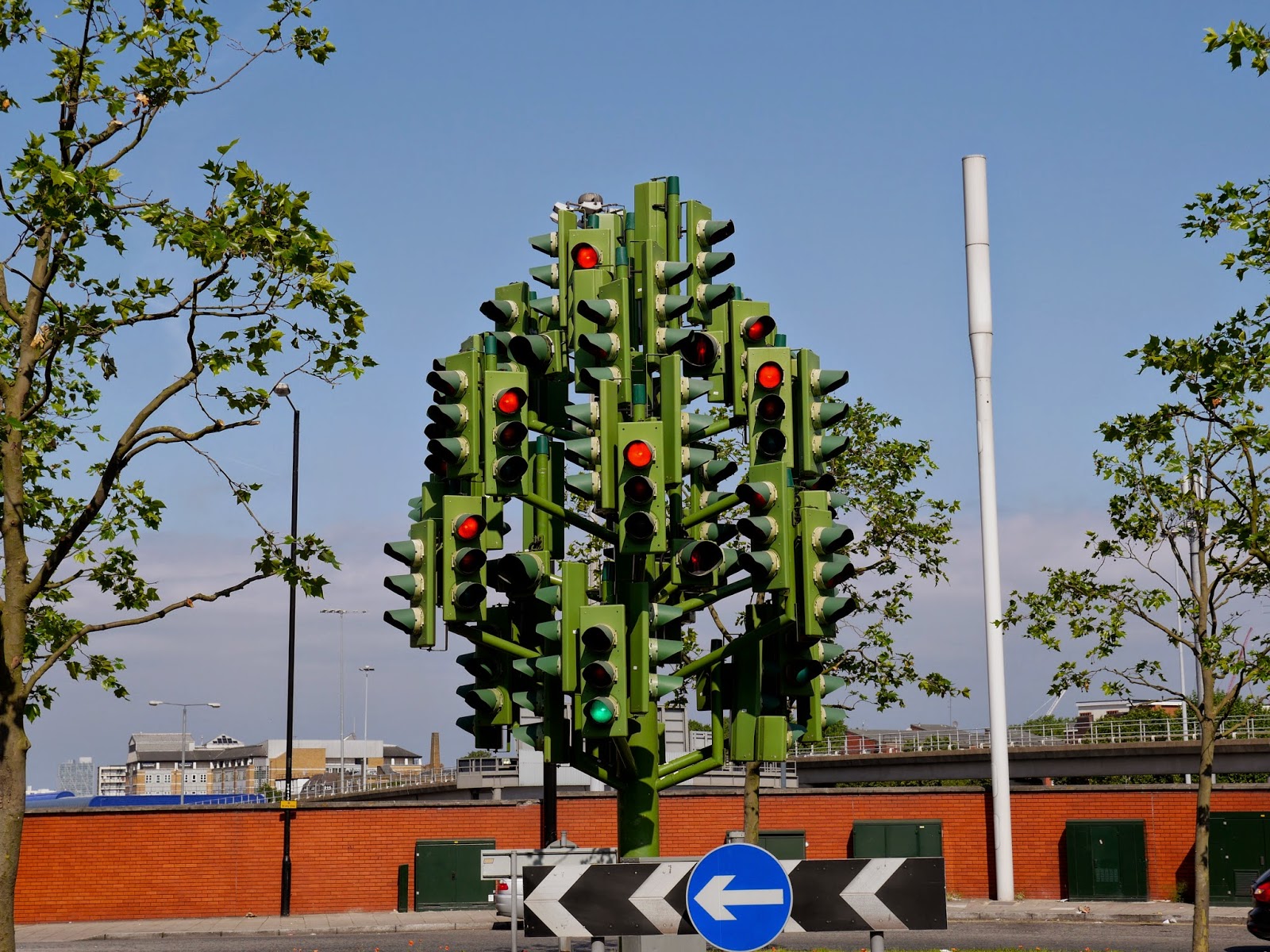 As we headed over a bridge I thought I could smell something fishy and looking over I saw the famous Billingsgate Fish Market. Once the largest fish market in the world, it has been on its current site since 1982. It is open Tuesday to Saturday from 04:00 to 08:30 and if you fancy going to buy, you can. 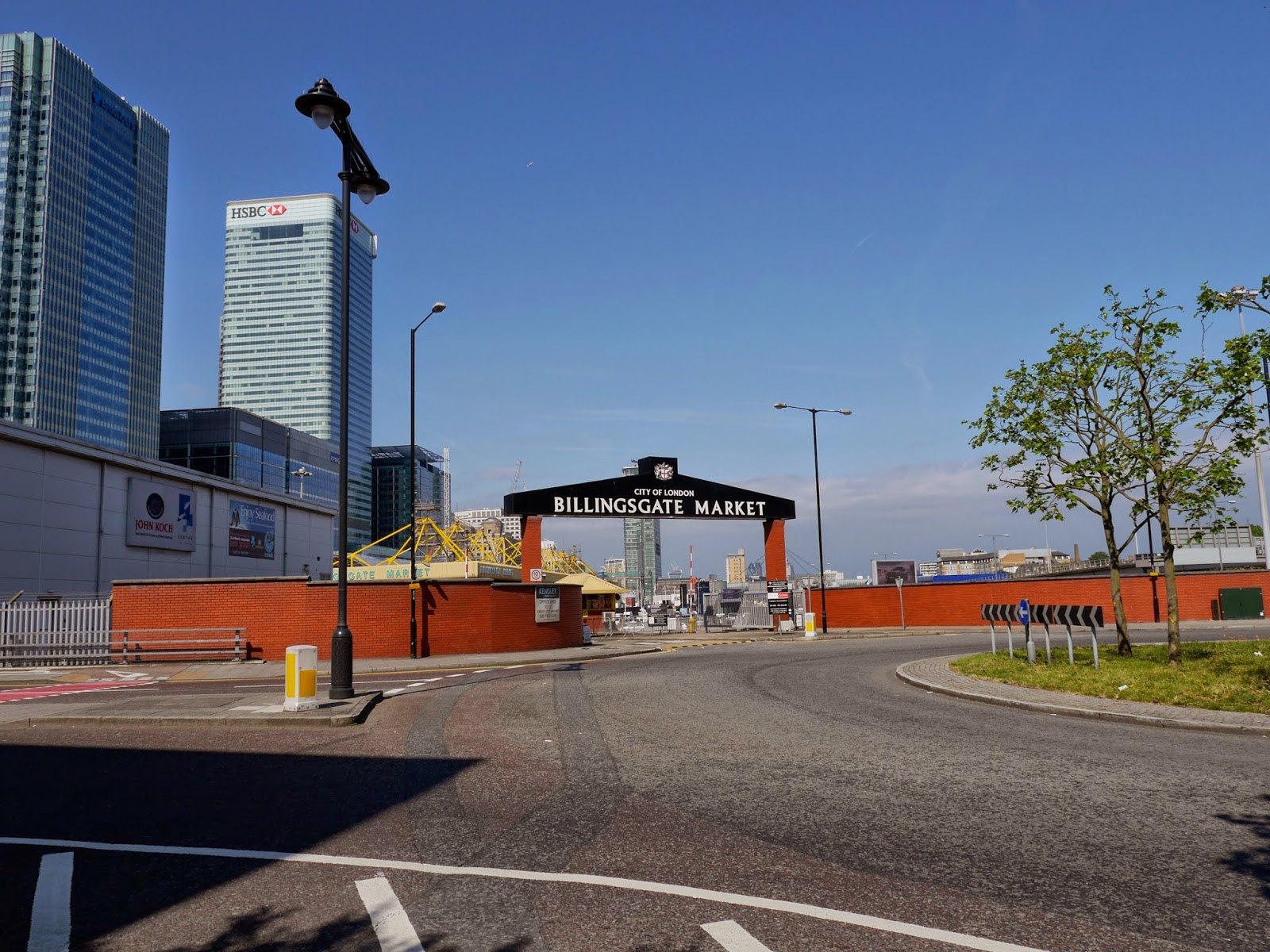 As we headed away from Canary Wharf we spotted a small naval frigate. I am not sure why it was there but tannoy announcements to the crew indicated that it was a working ship. 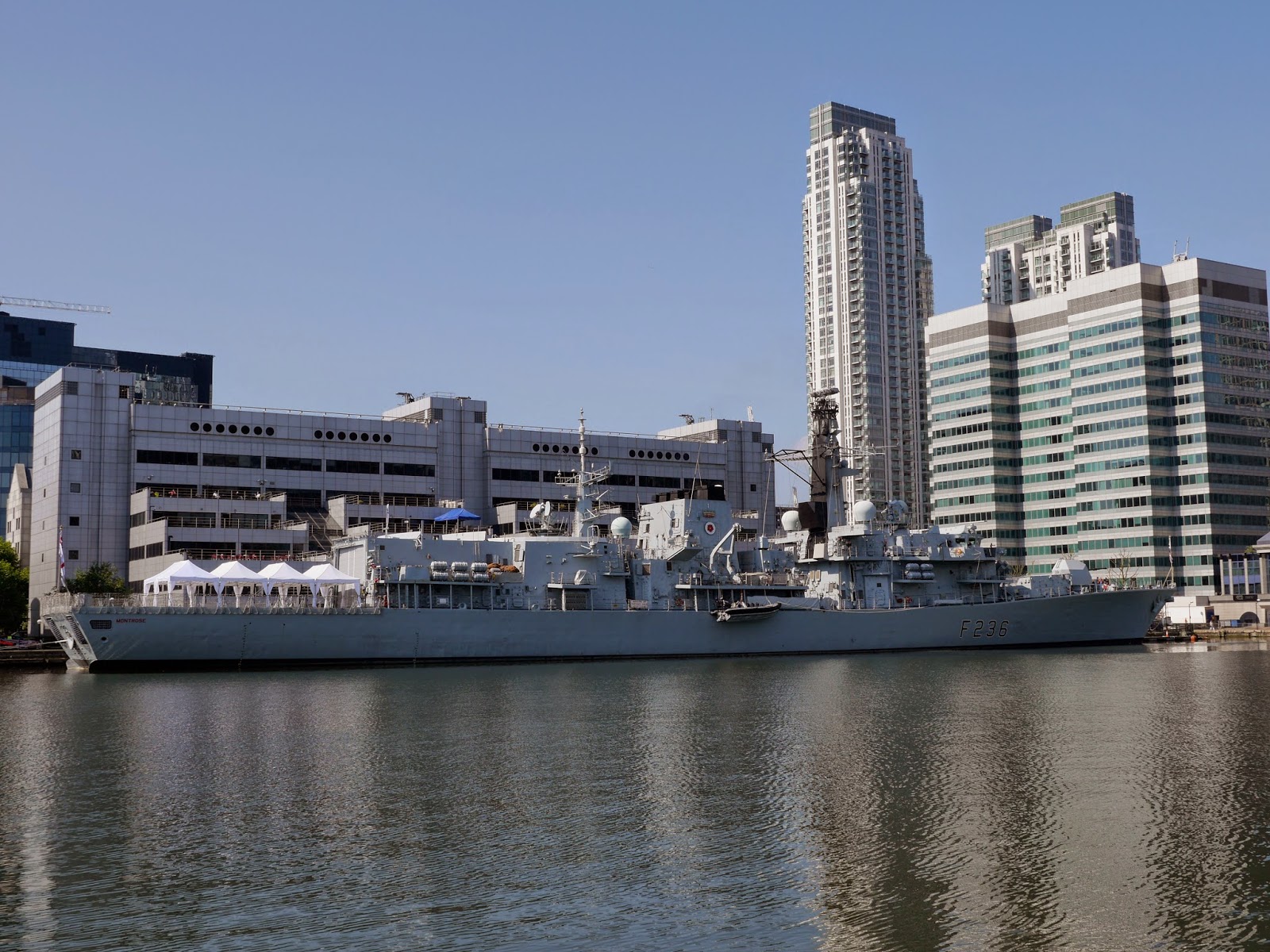 Just before we reached Greenwich I found that I could not navigate any further - as I had pressed too many buttons and mucked the route up. Andrew was not much better but had more of a clue of not only the direction to go and what to do with the Gamins to make them work. After reloading the route, we found it again and proceeded.

The foot tunnel at Greenwich that takes you under the Thames is a particular favourite on Brompton rides. Started in 1889 the 370 metre tunnel takes you 15 metres under the river Thames. Today it was incredibly busy with lots of people enjoying its delights. 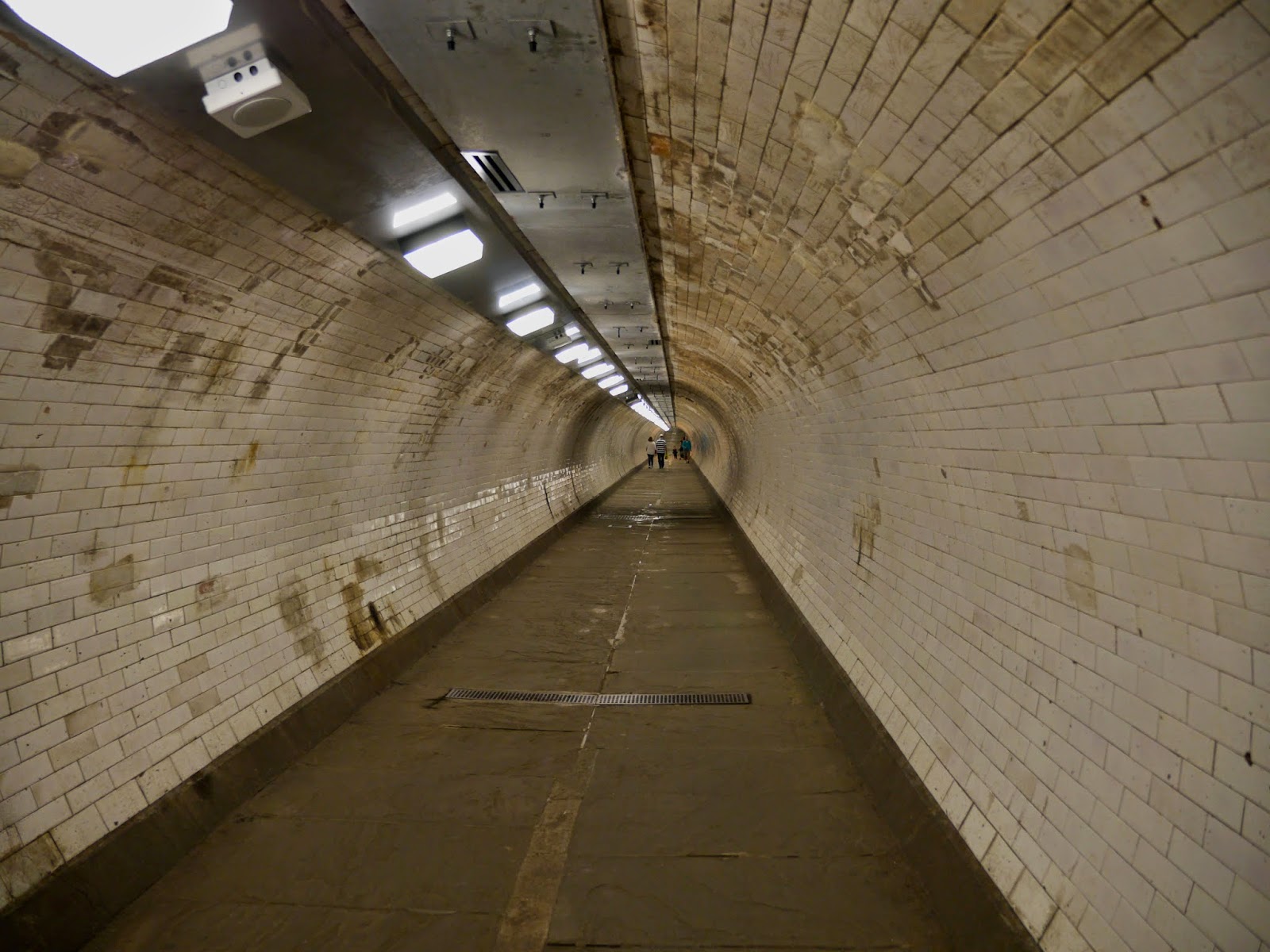 Out on the other side we saw another naval ship, this one bigger than the one near Canary Wharf. Again I am not sure why it was there but it was attracting lots of attention from tourists, onlookers and chaps on Brompton bicycles. 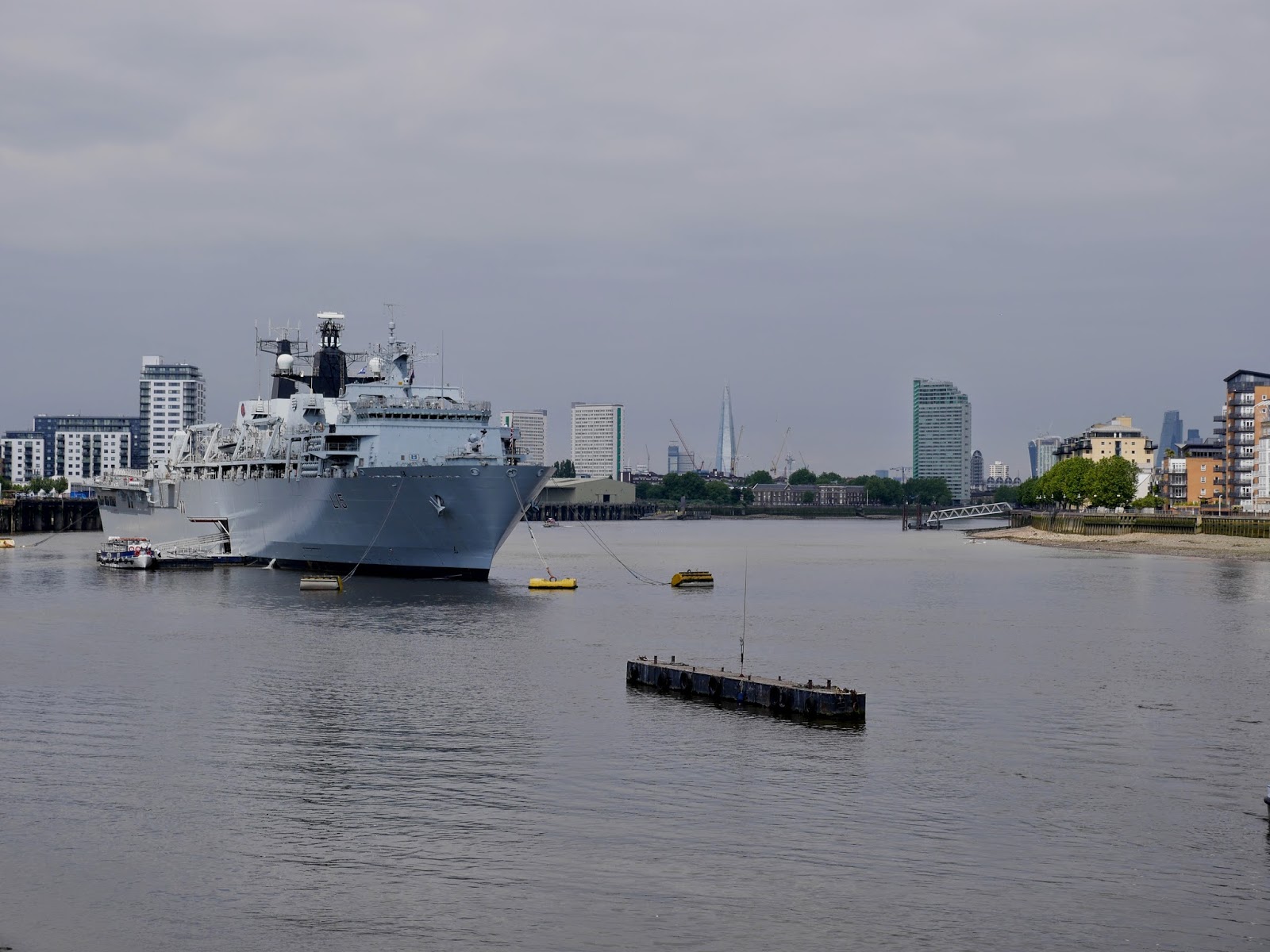 Passing through a very busy Greenwich we skirted the park for Crooms Hill. This is a fairly steep road that snakes its way adjacent to the park. Andrew on his new 44T motored up and said that he found it easier than on his former 50T. I have a 44T chainring and will have to fit it and give it a go at some point. 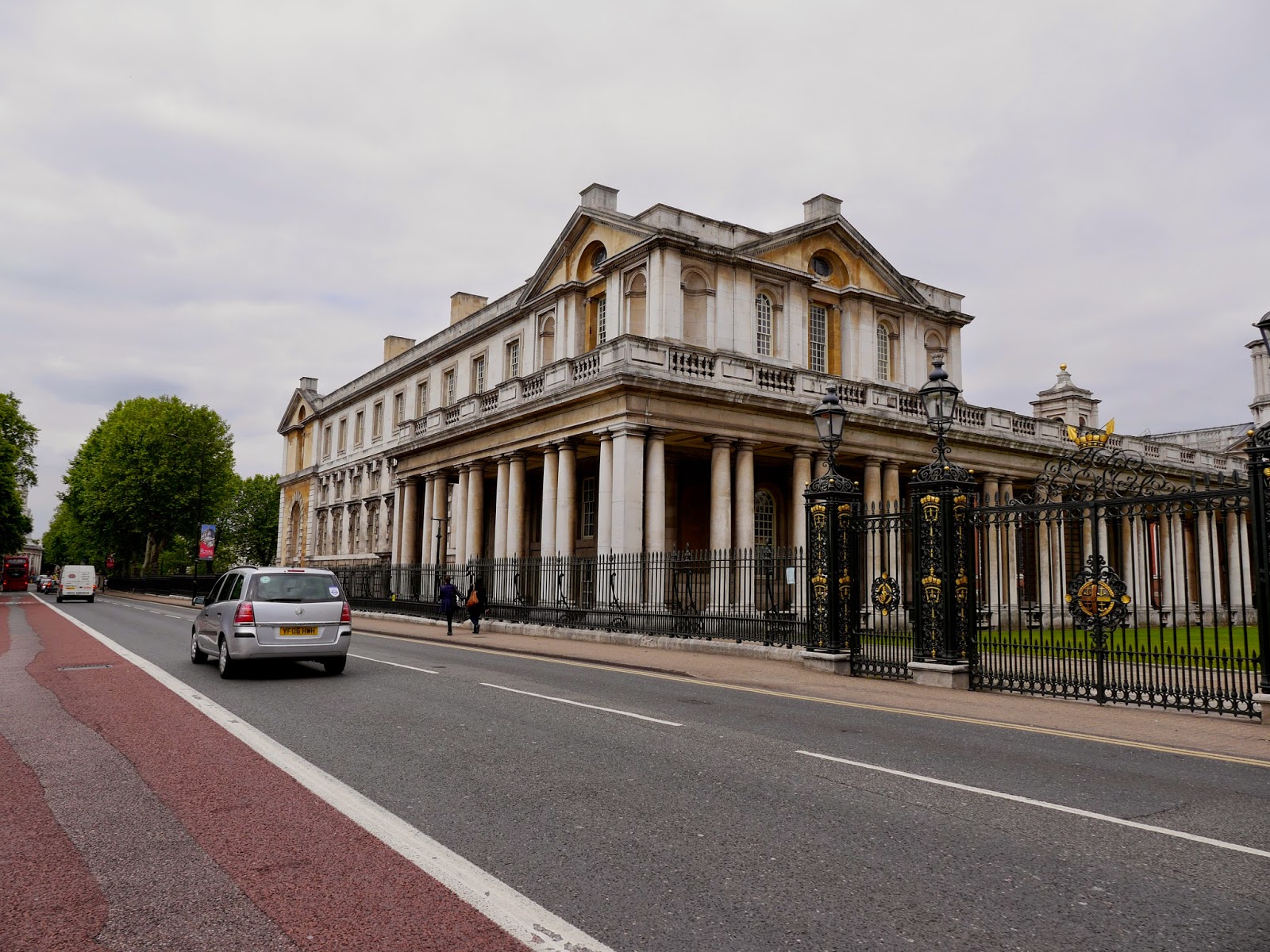 With the City in the distance we negotiated the winding Thames Path with varying degrees of success. At one point we cycled along parts of the Thames we had not been on before and even got a group of walkers following us to a dead end! 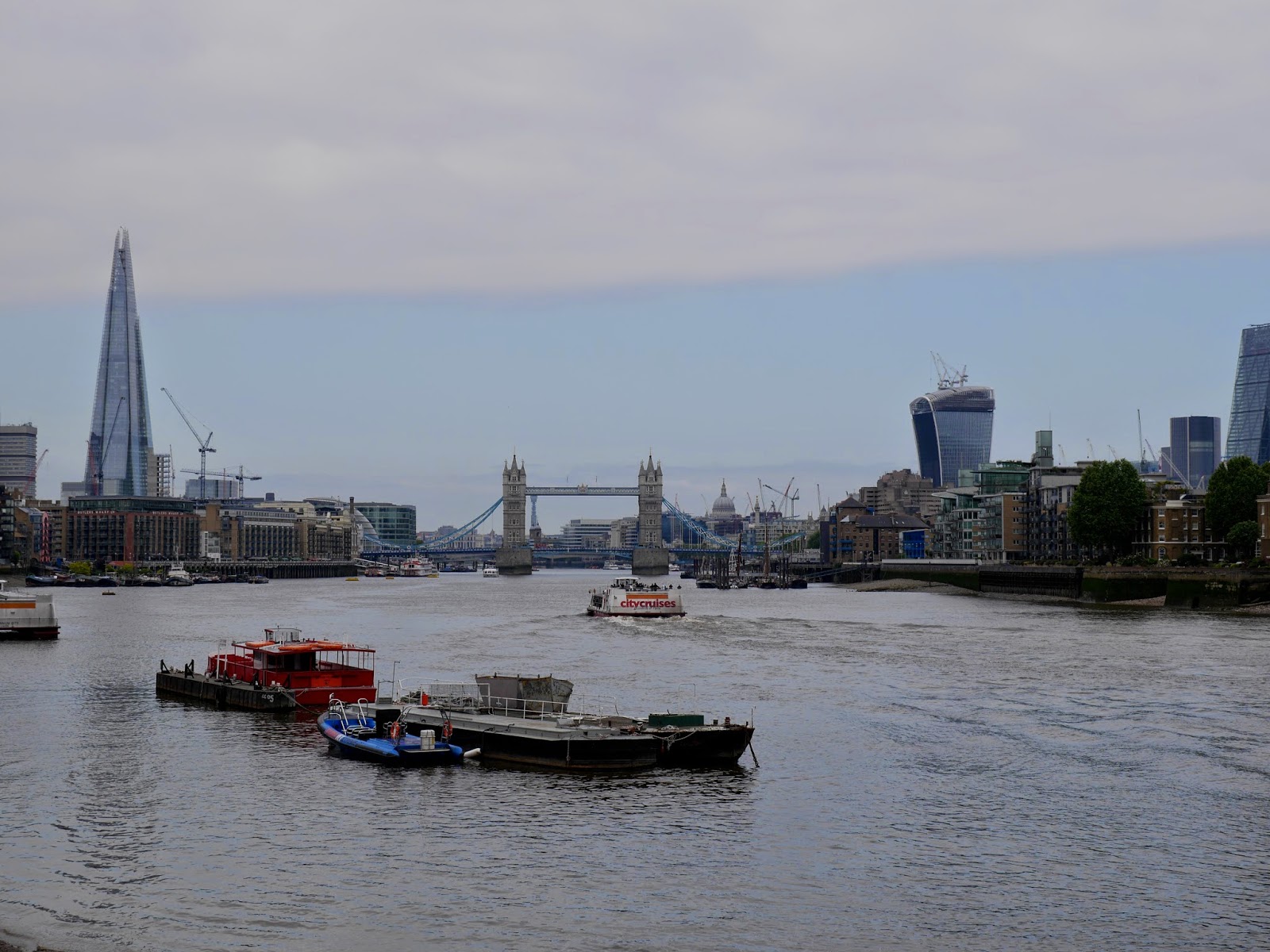 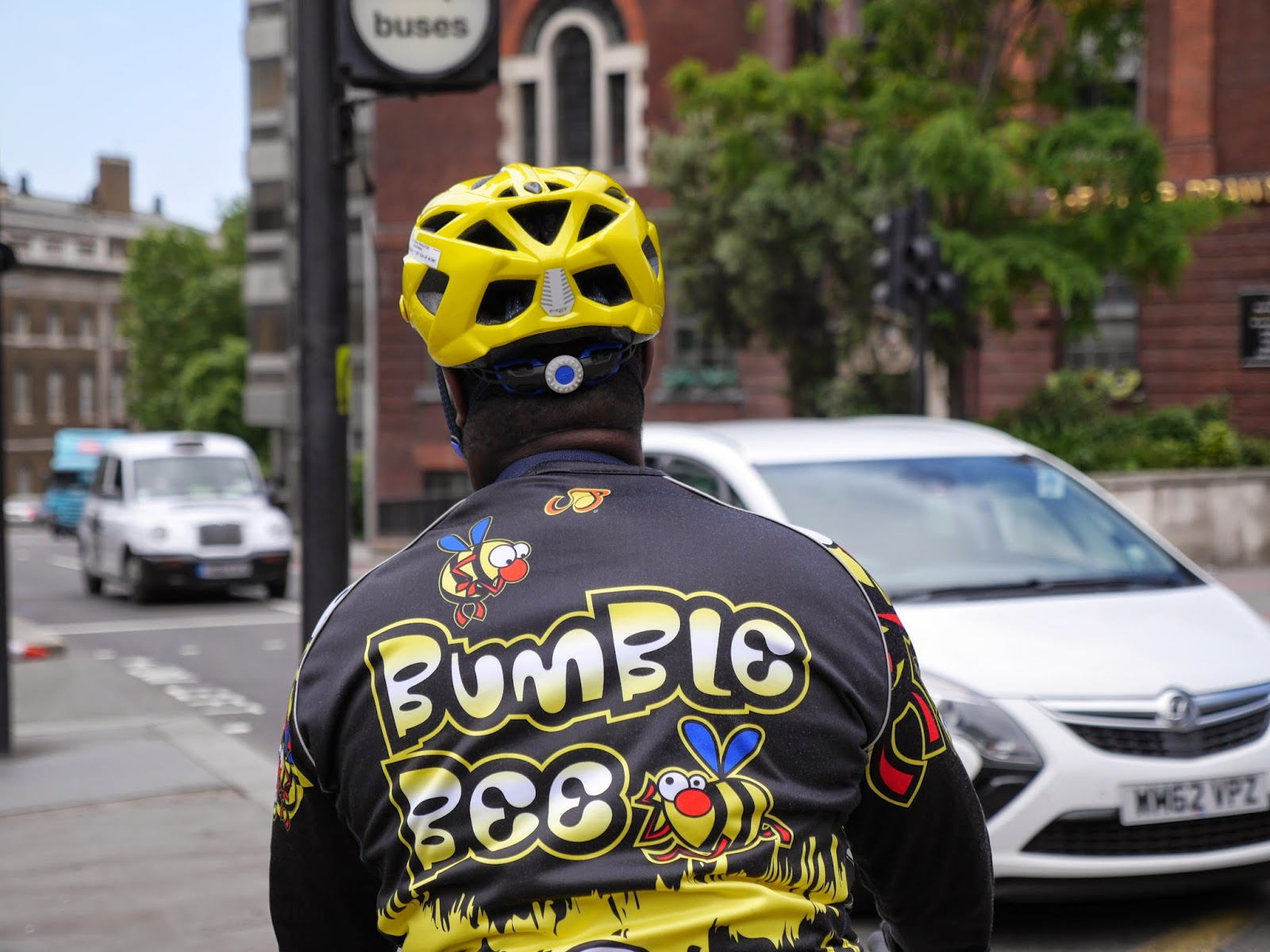 At a set of traffic lights I spotted a particularly fine motor cycle of the Italian variety. I nodded my approval at the rider and he did likewise at my Brompton. 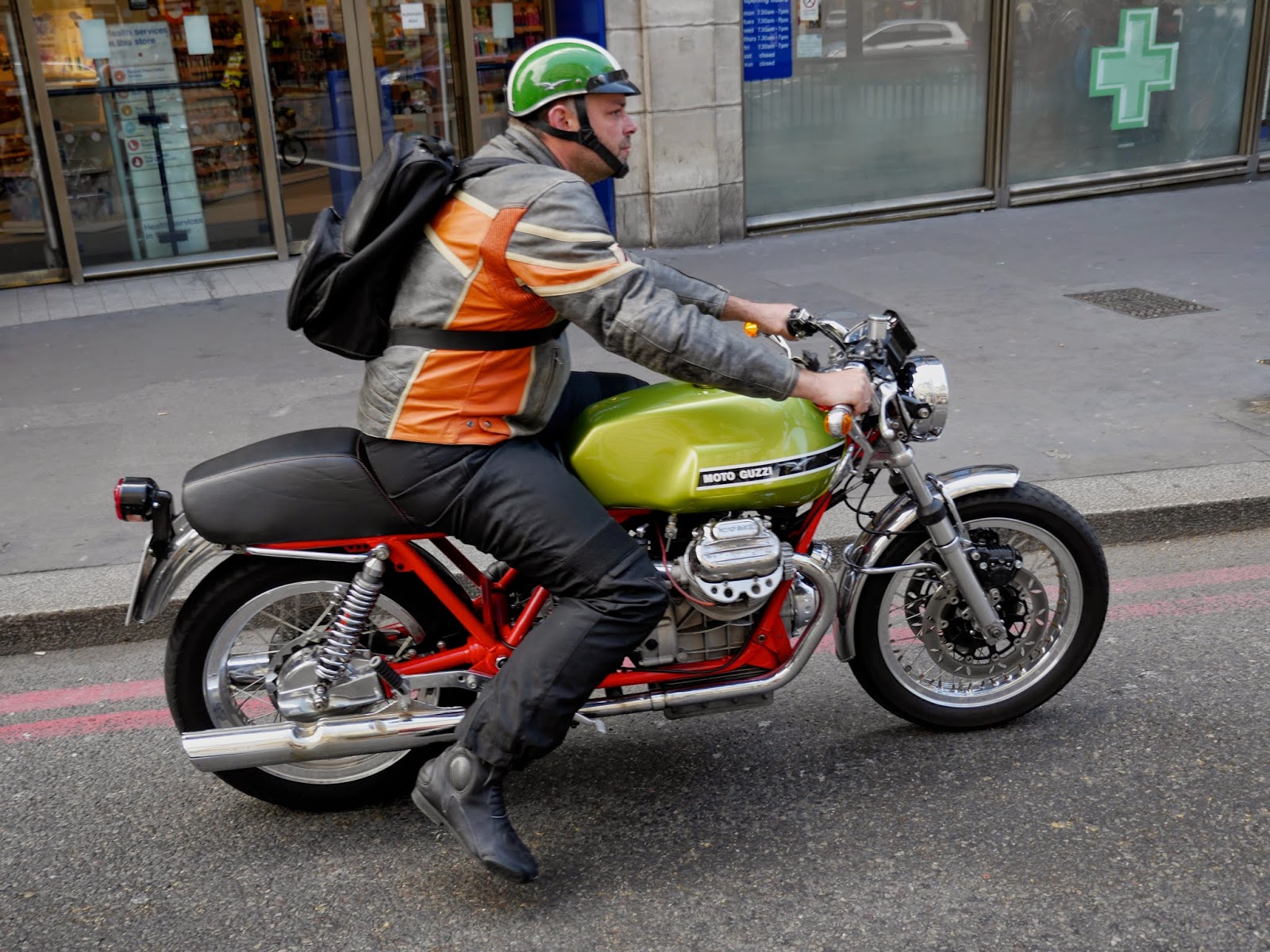 When we neared St Paul's we went for some refreshment at 'Look Mum No Hands.' They were quite literally run off their feet so we decided to forego the incredibly good looking breakfast for a tasty Chelsea bun and drink. 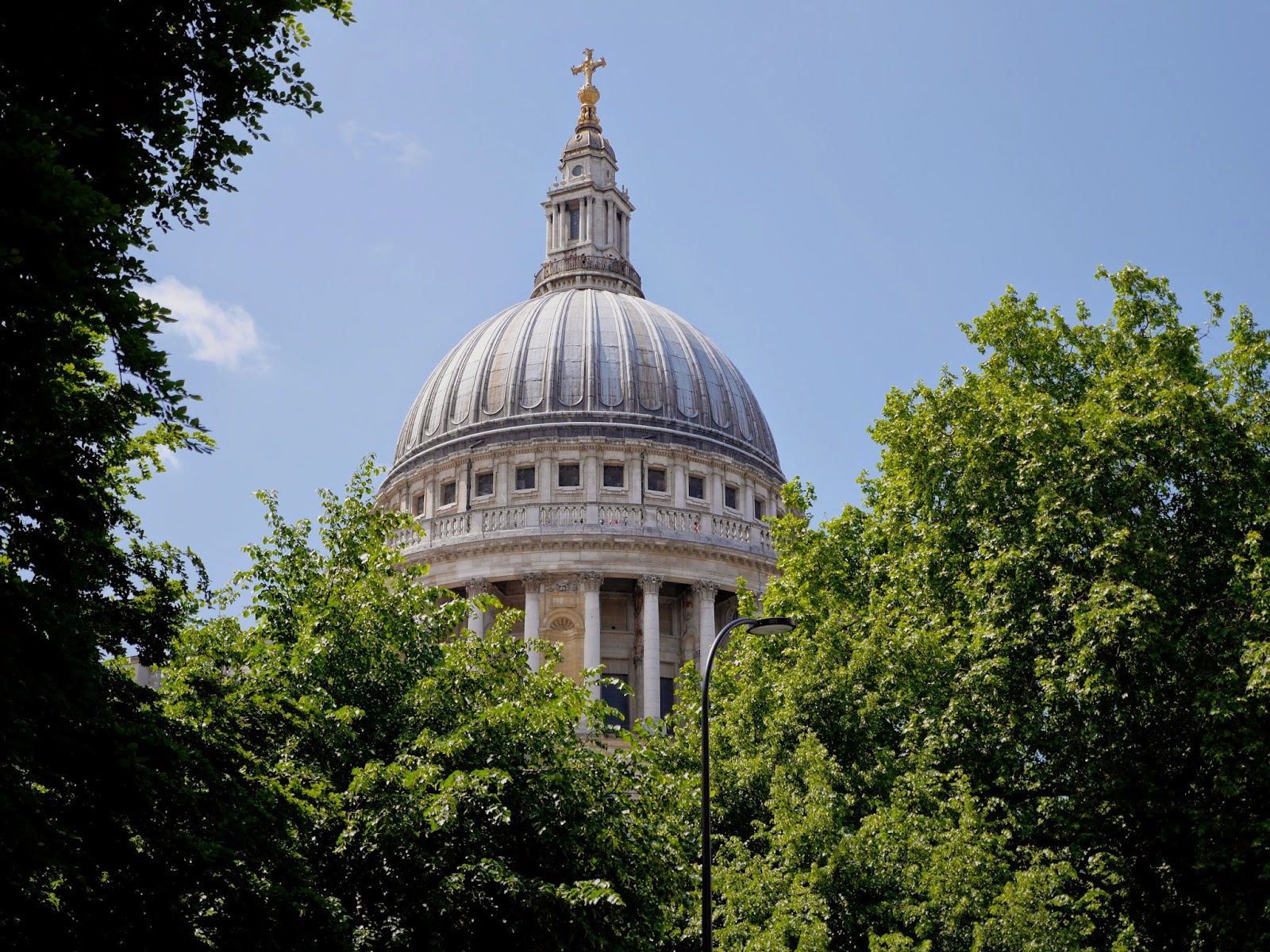 Refreshed we made the short journey to Smithfield Market. This time next week we will be racing in one of the purest bicycle events. As I took the photo below I felt nervous. We headed off for a few laps but unlike the actual race, there were other road users, pedestrians and traffic lights. Still, we managed a few sections at race speed. There was also some works being carried out for Crossrail which narrowed a section of road greatly. If this is still there for next week it is going to be interesting!!


After about three good laps we called it a day and went our separate ways. I cycled back just over 10 miles from Smithfield to where I had parked the car. The first part was hindered by lots of road closures as there was an event on but not sure what? This was a good ride out and for me the getting lost was part of the fun. It was also good to be out with my Partner in Crime.

I'm sure that those with road bikes, mountain bikes or hybrids would say that that they love their bicycles but there really is something more to owning a Brompton. Owning a Brompton and riding it just makes you feel good. It also rubs off on others too. At Greenwich a charming lady from India asked if my bicycle was a Brompton folding bike? When I confirmed that it was, she enthusiastically asked if she could take a picture of it as she had hoped to see one while here on her holiday.

If you are reading this and you own a Brompton, you may well be nodding in agreement. If you are thinking of getting a Brompton, the only advice I can give you is to look back at my blog entries and read about all the adventures I have been on. Yes, I'll be commuting to and from work on my Brompton on Monday morning but I will also be using it to go on lots more adventures. I am not saying you'll have the same experiences or feel the same way I do but...

You can click on the link below which shows the route from Canary Wharf. I didn't actually record the ride until this point - such was my ineptness at navigating. I think it was possibly 10 miles more as we started at the London Eye?
Map and ride data
at May 31, 2014