Last night Mark (King of the Hill) tempted a few of us Bromptonins to try out a new route he had been working on and tinkering with. Being allowed out for good behaviour, I met him and a few other Brompton club members at Trafalgar Square at 20:30.
On route I got caught up in a Critical Mass cycle ride. For a few hundred metres I was one of hundreds riding noisily and enthusiastically around the streets of London. Luckily as I got off my bike and walked to the top of Trafalgar Sqaure they made their merry way down towards the Houses of Parliament.
The night was near perfect for cycling. Warm with a gentle breeze, it made a dramatic change from the meteorological events of last week!
We proceed to our first location that overlooked Tower Bridge. There were lots of people around - mainly tourists - and the sight of several Brompton bikes was a bonus attraction for many. 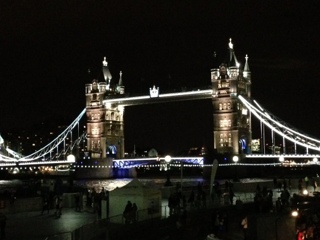 As we headed further east we traced some familiar locations on our many rides along the Thames - amount my favourite routes. At one point we overlooked Canary Wharf and as we tried to take photos in the dark a tall ship travelling east caught our attention. It looked like a pirate ship with its tall masts and square sails. 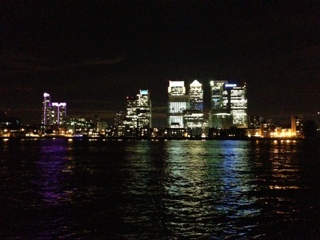 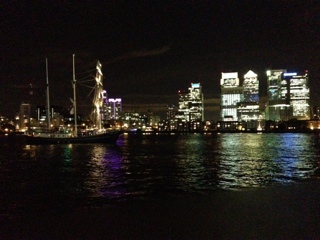 Cycling further east we reached Woolwich Arsenal and it was here that we saw many more pirate-type ships. I don't know what so many were there for but they certainly added to the views. 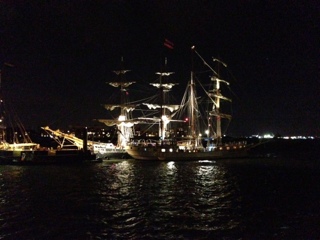 Mark had hinted that there would be a lung busting hill, from the sumit of which there would be stunning views of London. The hill was Eglonton Hill and it was certainly demanding. In recent weeks I have been up many a hill and have got better at ascending them. On a high from besting Ditchling Beacon is particular hill didn't pose too much of a threat. The views were stunning and could just be viewed through the gaps in the houses. 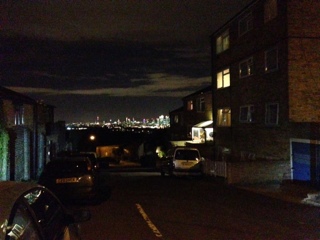 Not long after the hill we cycled though Blackheath and interesting location to say the least. During the height of the plague, Blackheath - being far enough outside the City of London - was the site of a mass plague pit. The uneven levels are due to different parts being used more or less this this grizzly purpose. Over 100 years later Blackheath was a popular haunt of highwaymen and virtually a no go area. Before we left Blackheath we passed Ranger's House, a Georgian villa that houses a vast art collection. 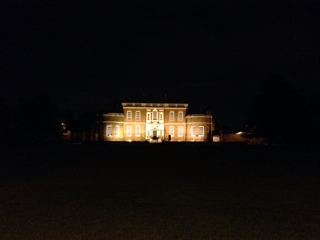 Travelling under the river Thames via the familiar foot tunnel we were joined by lots of other cyclists. The tunnel acted almost like air conditioning, cooling us down.
On the last leg of our return to central London we took last few pics of Canary Wharf, a location we had cycled through as part of the ride. We then reached the familar sight of Tower Bridge. At this point we made our respective ways home. 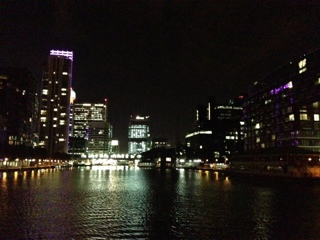 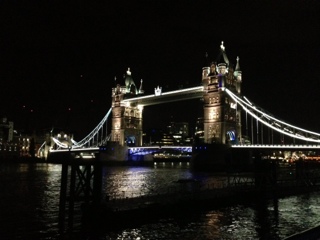 As I reached the bottom of Lower Regent street there was something I saw and heard that left a sour note on a really good evening. Unfortunately a cycle richshaw driver lay on the ground surrounded by medics. I am not sure what happened but he looked semi conscious. As I waited to proceed I heard a taxi driver with windows down shout out, "hope it hurts." Not good.
Despite this I really enjoyed the ride and look forward to repeating it during the day or again at night at some time in the future.
Night Docklands Ride - data and maps
at August 31, 2013