This morning I was out bright and early and off to attend one of iBikeLondon's excellent rides. I had arranged to meet a few of my fellow Brompton Club members at St Paul's Cathedral and one by one they arrived. After a coffee and catching up we cycled the short distance to the the official meeting point - City Hall on the South Bank of the river Thames.

On route we stopped at the wall of lights where we took lots of photos. I think we have been here before on one of our night rides but I cannot be sure. After perhaps far too many photographs we pressed on to our meeting point.

When we arrived at City Hall there were already quite a few people there and more than a few on Brompton bikes of various colours. It was there that we bumped into a few familiar faces and some new ones. One new member to the fold, Andy P was kind enough to say that my humble blog had a part to play in him getting a Brompton. 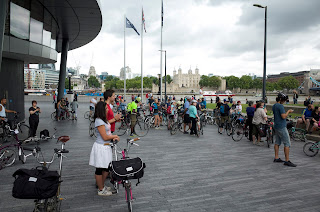 Elisabeth from iBikeLondon - the very talented artist who was at the recent Brompton World Championships said hello and gave me an orange badge she had on with a Brompton. I was rather chuffed! 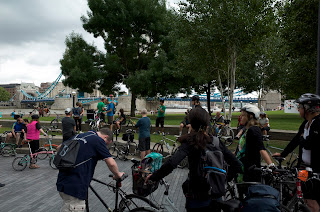 After a safety talk from iBikeLondon'd Anthony we were off. I was invited to help out and marshall the ride at junctions. It would be true to say that I was really pleased to be asked. At a few points in the ride I proudly marked the junctions until the last rider was past and then zoomed back up the line of cyclists.

As always iBikeLondon's John navigated the route with great skill and made sure that everyone knew whether there were any tricky bits coming up. 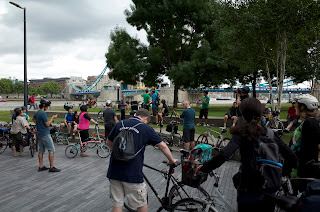 Once we were given the go ahead we walked out bikes along until it was safe to start the ride proper. Lots of onlookers speculated as to what we were doing. Some asked what we were doing. The best reply I heard explained that we were cycling around London in a large group as it's fun. 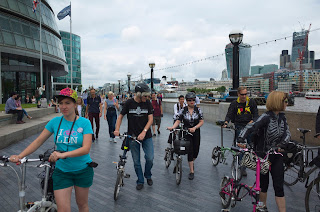 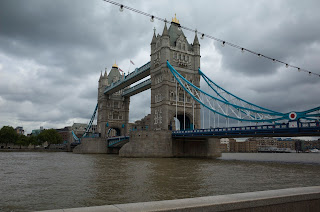 There was a really good turnout for this ride and as always it attracted all manner of cyclists from a vast array of backgrounds. For me it is one of the reasons why these rides just work. 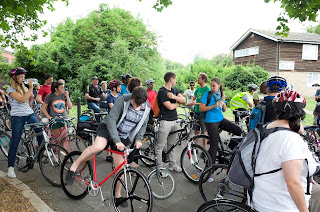 We progressed to a vantage point overlooking Canary Wharf to one side and the City of London to the other. Clouds ominously formed and the sky turned a shade darker as the threat of rain seemed as possibility. 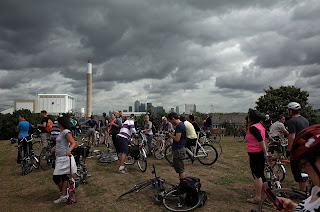 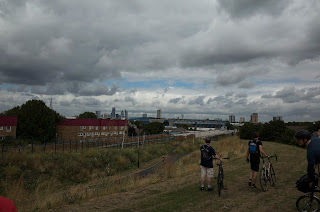 Cycling further on we reached Greenwich - a favoured location for many a Brompton Club ride. Going up the hill in Greenwich Park was a gleeful moment for me as I love hills. I still like my clipped in pedals and after adjusting the cleats they seem to be better.

At the top of Greenwich Park it started to rain but it didn't last long and those who looked to grab a waterproof soon thought better of it. We were treated to some lovely views and after a few group photos we were off again. 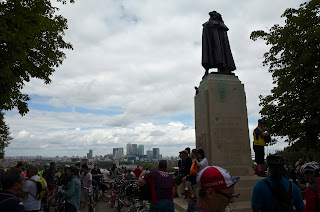 Reaching the Greenwich Foot Tunnel memories flooded back of many a ride with my other cycling partner Mark (King of the Hill). Virtually all of the Brompton riders simply carried their bikes on their shoulders down the stairs - the versatility of our folding bike. 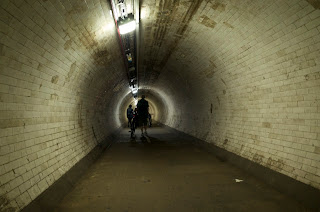 Towards the end of the ride we had to negotiate a twisting path with 90 degree turns. It was great fun and brought a smile to the faces of everyone. I wish that I had videoed it as it looked brilliant. 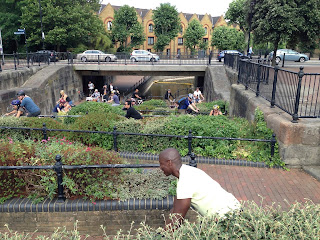 Before long we were at the end of the ride where those who had brought a picnic sat down in the Hermitage Riverside Memorial Garden and enjoyed lots of tasty morsels. Unfortunately I was late for somewhere else I had to be so had to make a very swift exit and head back for home. Saying goodbye to those I could see, I made my way back to where I had parked my car off the Marylebone Road. 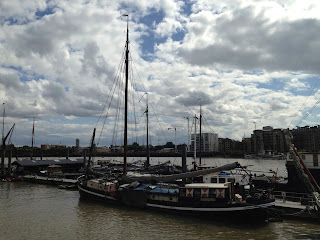 To my amazement I was able to negotiate my way to where I parked my car without getting lost. Believe me, this was incredible as setting off from the picnic area I thought to myself, I don't really know which way to go?

At a set of traffic lights on the Strand several naughty cyclists jumped the red lights - something I don't do. A black taxi was behind me as I shook my head as they cycled past and saw one almost get run over. They didn't get far as another set of traffic lights haled the traffic. Again they went through the red light. This time the taxi was on my left and he turned and shouted out, 'I wish they were all like you Mr Orange!' I wondered who he knew my moniker but realised it was printed on the back of my bright orange t-shirt!

The iBikeLondon rides are great fun and seem to be getting ever more popular. I always come away from one of their rides seeing parts of London I didn't know existed and making new friends. If you live in London or can get to London for one of their rides you won't be disappointed.