As I am sure you are aware Brompton ever the company to improve, tweak and update components on their brilliant bicycles made a few changes to their 2013 lineup. Rumours surfaced first of a new brake lever to get us all excited. Pictures were released that caused quite a stir and finally if you we one of those purchasing a 2013 model (which I was) you got he new levers!

I have already sung their praises in previous blog entries but I will say again that they are a dramatic improvement over the older version - looks, form and function. I have waited for quite a while for these to be available as an after market upgrade for older Brompton bikes - namely my Original Orange Brompton. Finally they are now available. 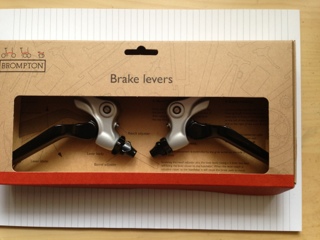 It has taken Brompton quite a while to get these out as a spare part but you cannot blame them too much as Brompton bikes seem to be in such demand I suspect they can hardly keep up. Well they are here now so if you choose to you can get an instant improvement. 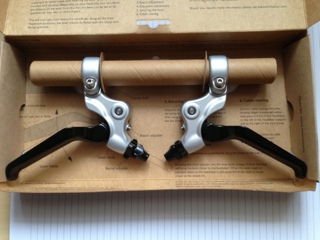 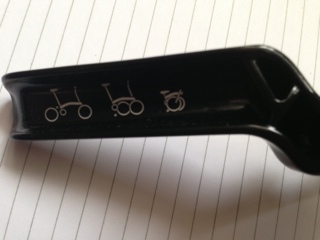 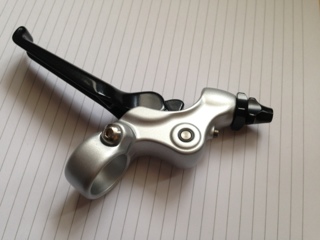 Anticipating their release at some point, I actually bought a new set of brake cables months ago so that if I ever got my hands on these I'd be able to replace them too. Fitting the new levers is a pretty easy task and wasn't too taxing.  My advice would be to take it steady and replace cables one at a time. This way you can see where the routing goes. I know at some friends take a before picture on their phones and refer to it as often as needed.

My Original Orange Brompton now proudly wears the new 2013 brake levers and looks great. It's 2013 makeover is now complete. The only thing I have to do now is replace the gear and derailer cables at some point.

The 2013 brake levers can be bought individually or as a set (which is what I did) for £29. For what you get and the improvement I performance, this is a small price to pay. I bought mine from Brilliant Bikes - the only place I any of my Brompton spares as the are like their name suggests brilliant.
at August 14, 2013