London shutting down for Monday

London has been a little different lately - for obvious reasons. Over the past week the tube has been busier than it has been for ages and anywhere near Buckingham Palace, St James's Park, Palace of Westminster and queue along the Thames has been manic. This has been pretty much 24-hours a day. As such, I have avoided the areas mentioned as much as I can.

I have passed by Buckingham Palace at least once a week for more or less my entire life and never really given it a second thought. I suppose Londoners take a great deal of the touristy attractions for granted. In all the times I have been past, I never did see the flickering of a curtain for those inside to see what was going on outside in the real world. When things get quieter I will continue to use it  as the backdrop for the odd photo.

Monday will see the State Funeral take place and judging by the crowds out in the queue, viewing the flowers in St James's Park and those just soaking in the atmosphere, I suspect it will be one of the busiest times in London for several years.

Stay safe out there people. 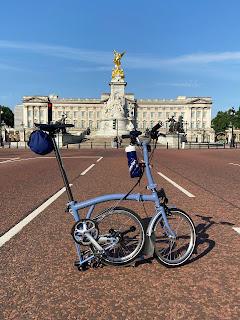