I think that I have written about my Cloud Blue becoming my commuter hack recently and last week and all of this week has certainly put it to the test.

The setup is pretty simple. I have a hub dynamo wheel, Supernova front/rear lights and a Brompton Borough Roll Top Bag Large in dark grey (that goes well with the colour of the bike). I also have a Brompton Borough Waterproof Bag Large that doesn't need the rain cover when the wet stuff falls.

While taking the photo below a couple of private security guards on patrol in their miniature car (they all seem to drive around in these) could not comprehend why I had stopped to take a photo of my Brompton. 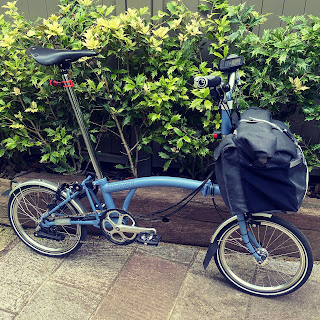 My commute isn't especially long, being just over 4 miles but it is a demanding four miles and that really does make things of interest. There is about half a mile of incline and then another 3 miles of climbing. The last mile of that 3 miles is demanding to say the least. The remainder is a fast descent all the way to work. The reverse is rather better but there is that grinding half a mile or so to overcome. It is a route I have grown to like a great deal.
This week it rained and then rained again! One of the days last week, thankfully on the way home, I was drenched to the skin. The rain fell so heavily that by the time I got home I was akin to a drowned rat. 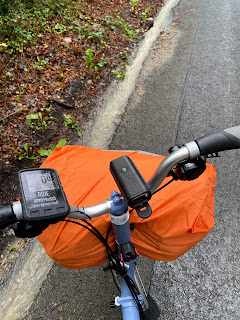 The next day the weather did not know what to do. It rained for a bit, the sun shone and then it rained for a bit more! A rainbow shone for a very short while and moments after taking this photo, it was gone to be replaced by yet more rain.
It has been a few years now since I used my Brompton for my daily commute but now that I am back to it again, only snow and ice will stop me from doing so.
Until next time, stay safe out there people!