Saturday was Dunwich Dynamo day and as can happen with things you have had in the diary for ages, it arrived quite rapidly. The preceding couple of weeks had been hectic to say the least and there had been little time to devote to thoughts of the Dynamo.

I had a family event earlier in the day but before this I did manage to give all three of my Brompton bicycles a thorough clean. That done I set off for my family event which I enjoyed for a few hours. Once home I packed the Mini O bag and saddle bag and set off with my Orange Titanium.

Not far down the road I heard a slight clicking sound. When I stopped to have a look, it seemed as if my rear wheel needed tightening and there was a little play. I am sure that it would have been okay but not wishing to chance it as I had the best part of 120 miles to complete, I headed back. I swapped the bags over and took my Orange Black Special Edition.

Sadly, all of this meant that I was going to be late. To stand any chance of getting top the start at London Fields a little after the Brompton peeps had left would mean me taking the tube. This was horrific! It was hot and crowded and several routes to Liverpool Street were closed off to me as there were various closures. Eventually, after taking all sorts of combinations of tube lines, I arrived at Liverpool Street Station. 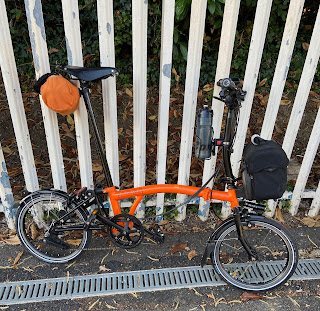 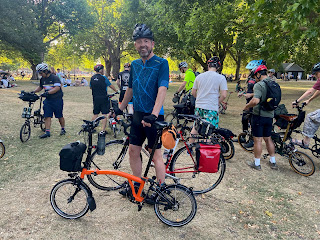 Our initial pace was purposeful. This year getting back from Dunwich was going to be rather different. There would be no standing in a queue hours before the coach you managed to get on set off. Mark had arranged the hire of a smaller but perfectly formed coach that would be at Dunwich beach by 11:00 a.m. Normally I would be motoring along to try and get there as early as I dared to secure a slot on the earliest coach I could. This year, that was taken out of the equation, so I didn't really care. 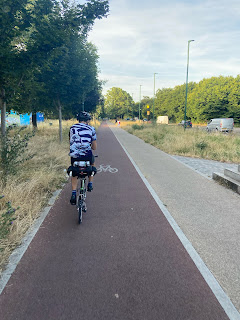 The sight of a Brompton peloton was a sight to behold. For the first few miles were were pretty much together but we did start to thin out. Poor Geoff was left behind for a good few miles after the group continued at a set of lights. 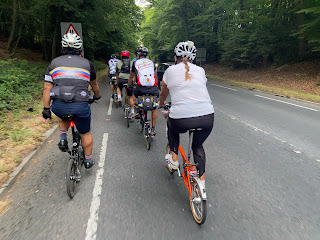 Riding along I think many of us Brompton riders received compliments from our roadie cousins. Some could not fathom how or why we would complete this on a Brompton. Others asked whether mine had a motor. One nice lady stopped to chat for a good few miles. I told her about the Brompton peeps and the rides we did and also the Fridays. She was interested in both and after saying our goodbyes, she was off into the distance. 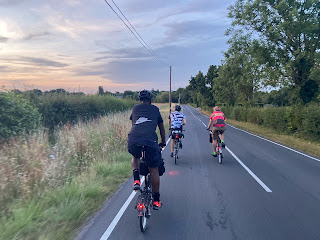 The evening gradually turned into night as the sun did its job of closing shop for the day. The scenery was rather lovely and the variety of colours in the sky was stunning. 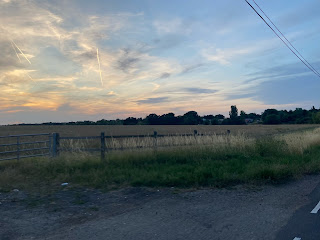 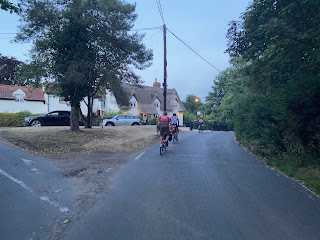 The disco ball light was a talking point for many and definately the must have accessory for next year. 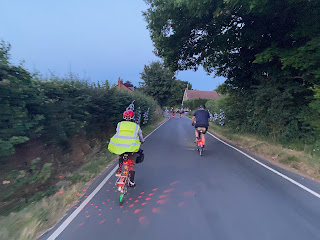 We stopped at a few places that had stayed open and this also acted as a regrouping point for those that had been further behind. 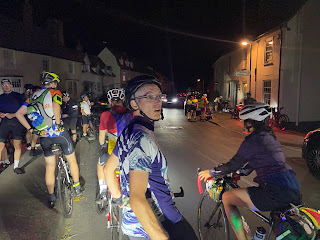 Outnumbered by our roadie cousins, I do feel that all the Brompton riders taking part more than made up for it with their enthusiasm. 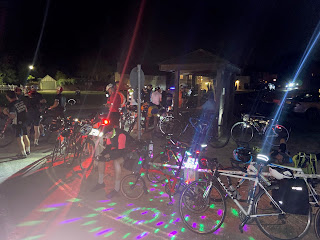 The moon was almost full and at one stop we were all busy trying to capture a photo of it as it emerged through trees. In the photo below you can just see Jenny (The Mile Monster) doing just that. 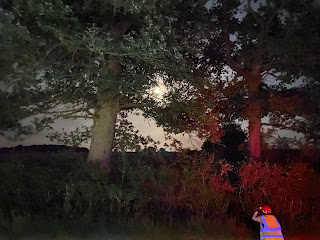 Apart from packing a good supply of water, I had probably underdone it on the snack front. (This was to haunt me later on). I had a burger at one stop which served its purpose of providing fuel but the best thing about it was the ketchup that came with it. Later on the van than sold the sausage in a roll was very good to say the least. You would have thought that this was enough to have kept me going. 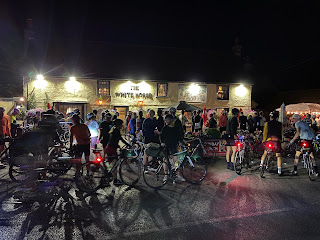 The early hours were cold, really cold and I donned arm warmers, a gilet and a boil in the bag rain jacket. I am so glad that I decided to take these as even with them all on I still felt the chill for quite some time. 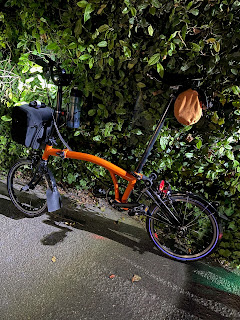 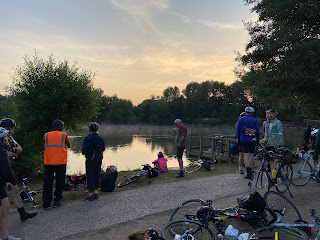 At about the 101 mile mark with another 12 miles to go before we arrived at the end of the ride at Dunwich beach, I started to slow down. Luckily I was cycling with Andrew who had managed to secure a spot on the coach at the last minute. Andrew told me about his work at the national Theatre - and they really should pay him a great deal more for the incredible enthusiasm he holds for the place - and I started to slow down. At one point I actually felt as if I could quite literally fall asleep while pedalling and had to try and wake myself up. Getting progressively slower and knowing I was in a little trouble, I asked Andrew if he happened to have anything with sugar. He handed me one of those gel things that in addition to sugar, also had caffeine. A few minutes after gulping this down, I felt much better and normal service resumed.
We met the rest of the Brompton crew at the next stop. After a short while we were off again and again spread out at our various paces. 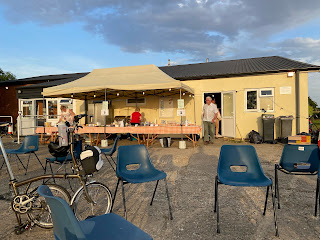 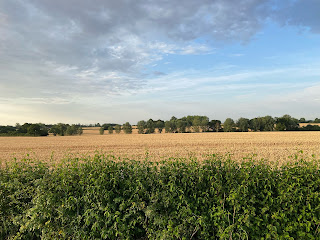 The last few miles I took sedately, enjoying the scenery and the sounds of nature. There seemed to be many Yellowhammer birds singing away at either side of the road and they were to serenade me almost right up to the end of the ride. 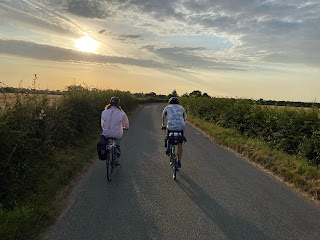 I clocked up 114.08 miles with an average pace of 12.2 mph. This was slower for me that previous attempts but it wasn't a race, there was no rush and i don't think I could have gone any faster. 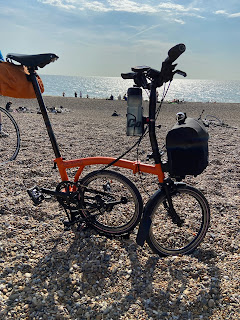 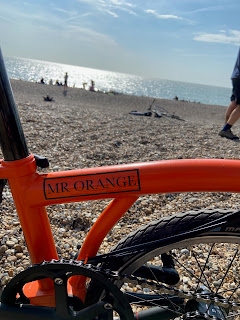 A few riders had been in the sea for a dip and I retired to a nearby tea room for a breakfast. This was eaten with great enthusiasm! 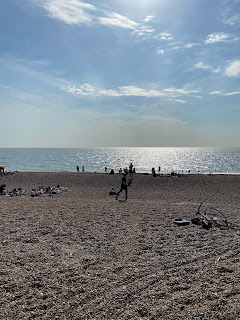 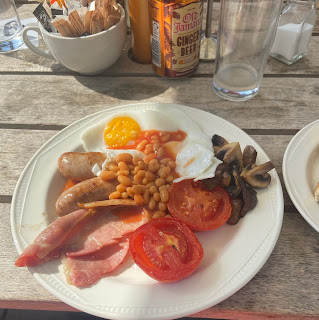 Our coach arrived before 11:00 a.m. but as the driver needed to have his rest break we didn't leave until 11:40ish. The coach was lovely and the air conditioning made things so much better. With our Brompton bikes placed in Ikea bags and neatly stowed in the storage area we headed off for Stratford. 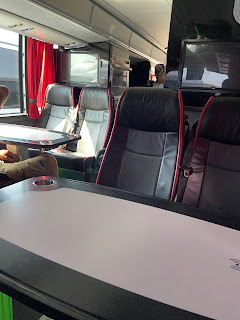 I sat next to Geoff but there was little conversation. I nodded off several times only waking fully for the last 30 minutes or so. Even for that I was in a near-vegetative state. Arriving at Stratford just after 15:00 I said my goodbyes and headed into the station to get the Jubilee Line to St. John's Wood. The tube carriage was fairly packed and the journey hot and noisy. Arriving at NW8 I speculated as to whether the people I cycled by would guess that I had cycled over 114 miles overnight on the Dunwich Dynamo? 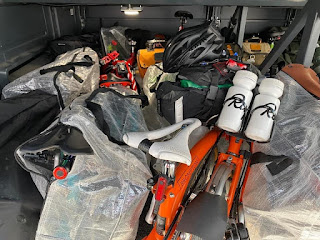 This was a lovely adventure. The weather (apart from the cold bit) was great and the absence of wet stuff a real bonus. The Brompton coach home was just brilliant and many thanks to Mark for organising. Also many thanks to my fellow Brompton riders for always making things fun. As always thanks to Geoff!

Before I stepped through the front door of my house, the date for the Dunwich Dynamo 2023 was released. I sent a message to Mark joking that he could put me down for a space on the coach! I think next time, I really do need to get some more rides in and pack a few more snacks. (I am normally good that doing just that on the many night rides I do but think the swapping over the bikes meant the emergency rations were left sitting on the chair in my office).