Wahoo Roam back to normal

I have gone through lots of different bicycle specific GPS devices. I am a big fan of them for recording ride data and occasionally used them to navigate where I was going. Those by Garmin - for me at least - were unusable and either took an age to actually load a route or could not load a route at all. I have of course used my phone but that isn't always practical and sometimes throws up route that I don't feel are cycle friendly. When I bot a Wahoo Bolt, things changed.

With the Wahoo I actually found that I could navigate really easily...anywhere. As such, I started to cycle to locations I would not otherwise have got to. Another bonus was that, using your phone, you could type in any location, address or postcode and within seconds the route is loaded up on to your Wahoo in seconds. In addition to this, the routes it suggested always seem to cycle friendly and on quieter roads.

So, it was a bit of a shock when I headed off from NW8 and tried to load up a route. It didn't work. There was no firmware update so I was stuck. I managed to get where I wanted to - eventually - but I really missed the simplicity and full proofness of my Wahoo. 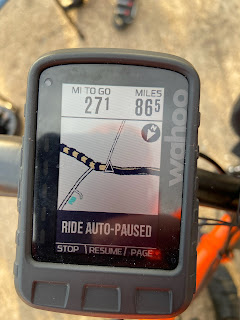 I searched on a Wahoo forum when I got home indicated that Wahoo knew there was an issue and that they were on it. Three days later an update sorted it all out. Phew!!

When on the recent Dunwich Dynamo I could thankfully load up a saved route and use it to navigate. This all worked fine and it was only the 'take me to' function that was not working. I am really glad that I didn't need to use it!