My usual light for nocturnal adventures is the Exposure Torro. This light is a few years old now and there have been several updated versions but it has remained a very dependable companion that is guaranteed to illuminate the path ahead with several hundred lumens for 10 hours - not that I really need it to last that long but nice to know it does. The other light I use a great deal is the Lezyne Mega Drive 1800i. This too is a beast of a light and the addition of the Infinite Battery pack that came with it, provides a longer burn time if needed. As you can see in the photo below and also my the title for this blog, there was a little bit of a disaster. 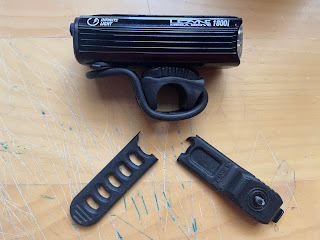 I have had this light for a few years and use the strap to mount it to the handlebars of whatever Brompton I care to use. Sadly, when trying to do this, it just snapped in two. Now this wasn't the end of the world as a short term measure I took the strap off another Lezyne light (that was the same) and used it instead. The real issue came later on when trying to buy a replacement.
I tried to find somewhere that stocked it but couldn't find any at all, to the extent that I gave up. I put my email address into a couple of sites to be informed when they had stock. After a couple of weeks I had forgotten about it until an email pinged into my inbox.  Seeing that there was stock, I decided to buy two. They were only £4.99 each so I thought getting a spare might be a good idea. 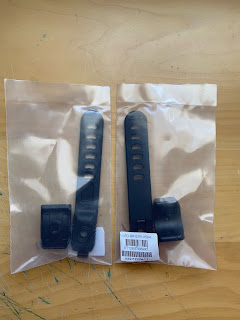 I now have a fully usable light again and I think that in future I will be a little more careful when taking it on and off bikes!
Until next time, take care out there people!!