What a day!  I have wanted to complete the Ride100 event on a Brompton for years but was always unsuccessful in the ballot. I did get into the last one that would have been held in Surrey but the 'C' word took hold and we all know what happened thereafter. I was looking forward to this day, despite the fact I had done very little in the way of training and it sort of arrived rather quickly.

I started at an ungodly hour and totally misjudged how long it would take to get from NW8 to the start line. As such I had to pedal pretty hard and fast to get down to Pall Mall from where I could enter the start route.

Once on the start route it did seem as if I need not have bothered to get to my early start window as riders a great del earlier and later than mine, rocked up and started together. The start was quite slow and we wheeled our bicycles along. On a Brompton, I was in a sea of road bikes and for the entire event I was to only see one other Brompton rider. Those of us attempting it on small wheels must have been very low in numbers. One theme for the entire ride was the considerable amount of attention directed my way by virtue of me choosing to ride on an Orange Brompton! More on that later. 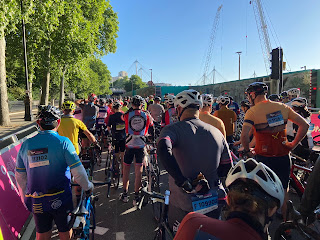 I had taken part in the Ride46 and the start line for that was very much like a 'Club 18-30' holiday - music, loud music and audience participation. (Don't worry I have never been on one of those holidays). We were told to mount our bikes for the rolling start and with the chirps and bleeps of the machine that registered the timing chips we all had, we were off. 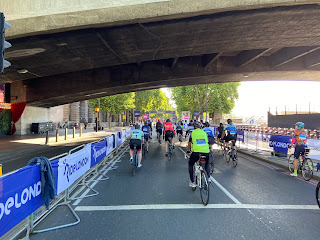 In a previous blog post you may recall that I had been suffering from a bit of a cold leading up to this ride. Before and the actual day of the RideLondon, I had all but lost my voice. (I had felt okay apart from a sore throat). Because of this my speaking voice could be likened to Vito Corleone portrayed by the late Marlon Brando. My first utterance to being asked whether any other Brompton riders were doing this event and using the word 'family' to describe my Brompton friends was as ironic as it was comical!! 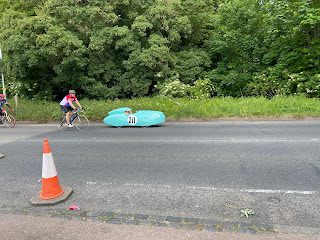 Throughout the entire ride - and I really do mean the entire ride - I was patted on the back, encouraged and commended about attempting the event on a Brompton. I do think that the bright orange bike and attire helped but the level of love and support was wonderful from my big wheeled cousins. 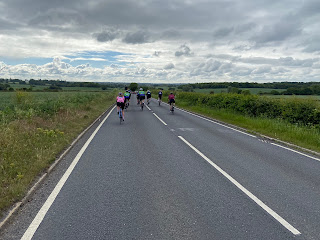 I didn't really stop at the official rest stops at all, in favour of being self-sufficient. (This was for me a test run for the Dunwich Dynamo in a few weeks time. I am glad that I did as I gather there wasn't a great deal on offer and some stops running out of what they had. 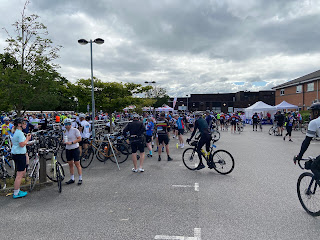 I had taken my Orange Titanium with me and ditched the normal saddlebag in favour of my trusty Mini O front bag and a small and lightweight Brompton pouch attached to the saddle containing additional water. This setup worked really well and the Mini O bag (that I have been using all the time on my Cloud Blue Brompton) was brilliant. 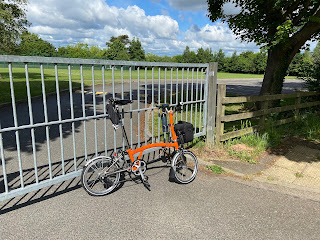 The route was lovely and undulating. We passed through some lovely little villages almost suspended in time and I resisted the instinctive need to stop and take photos! Almost!! 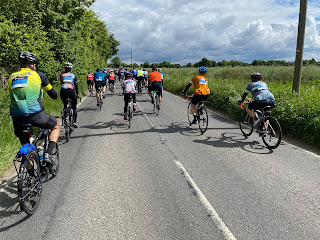 I only saw one other Brompton rider the whole day. He was on a Chpt3 and looking strong. He glided past and shouted out hello. I replied to my fellow brother and he disappeared into the distance. 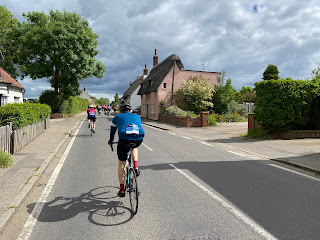 There didn't seem to be as many people out lining the route as I remember on the Ride46 but those that did were vocal in their support and even more so for a chap dressed in Orange on an Orange Brompton! As with many of the participants they could not quite believe it and I suppose I was rather unique compared to the thousands of carbon road bikes going by. I am always surprised at the patience of people living in areas where road closures for an even like this takes place. They need to be commended. 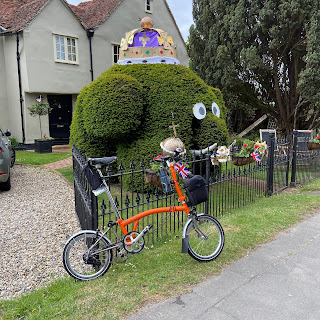 There were a couple of points in a ride where things came to a stop. I would say that they must have been almost 30ish minutes in total. Sadly, these were for accidents. I am not too good at seeing these, so when we were eventually allowed to cycled on and I saw some poor chap on the floor with a bandage around his head, I went to my happy place, looked the other way and hoped he was okay. 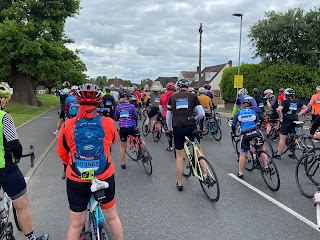 The last 25 miles due to the stops was perhaps my slowest 25 miles of the entire ride. It was also where there was some rather selfish cycling. Some cyclists went at top speed undertaking, weaving and having little regard for anyone else. The Tunnel near the end was rather scary because of this. However, it could not dampen the enjoyment of the day. 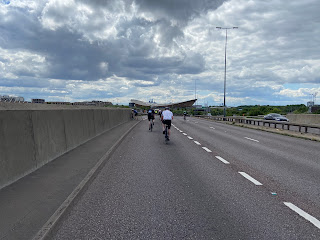 The RideLondon Essex 100 turned out to be 102 miles but hey who is counting. The finish line at Tower Bridge was a lovely way to end things. We had to wheel our bikes quite a bit to where the medals were handed out and on the way I chatted to fellow riders, equally as pleased that they had completed the ride. 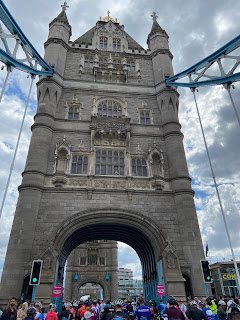 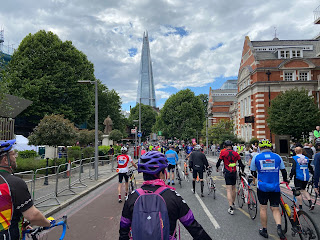 The medal was a little different in that it was made of wood and not metal. I quite liked this and the fact it was more environmentally friendly to make a win win.
As you can tell I enjoyed this ride a great deal. I cycled on my own but I chatted to scores of people on the way, albeit wheezing like Vito Corleone!  I managed to get round in 7 hours 50ish minutes. The moving time on my Wahoo was a great deal less than this. I didn't realise that your time would be stopped when you entered two of the stops, so I should have used them instead of stopping wherever I liked. The whole timing thing is the one aspect I don't really care for. When I do the Dunwich Dynamo in a few weeks time, the distance will be greater but the time aspect will not be a factor. With this there will also be a huge number of Brompton peeps taking part. Would I do this all again? If I could get in, I just might. 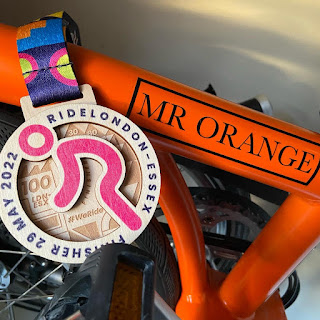 This morning, after a very good nights sleep, I don't feel bad at all. The legs are telling me that they have cycled 102+ miles but apart from that no issues at all. Many thanks to the organisers, the people who live along the route and had to put up with road closures and to my fellow participants who took a shine to a chap on an Orange Brompton.