Early this morning I ventured out for a short 10 mile spin on my Cloud Blue. This particular Brompton of mine does seem rather well suited to this task. As usual for this bike I was dressed in normal clothing - apart from the SPD shoes. (More on that later).

I started off at a very posh garage door in NW8. The owners paint this quite regularly but in all the years I have been past - getting on 35 years - this had been the first time I have ever seen it painted blue. Naturally, I had to stop! 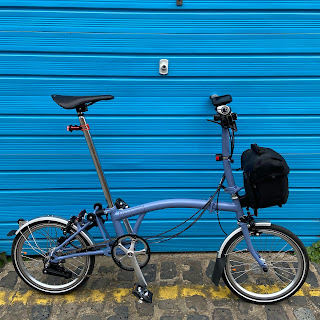 London was quiet with only the odd tourist out and about. I saw a few people on bicycles but I was the only Brompton rider I saw while out. 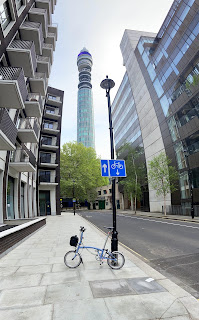 The further I got into the City, the less busy things became. I do recall cycling through during that first lockdown and it was perhaps one of the strangest experiences I have ever had. It all felt wrong for such normally busy locations to be all but empty. I am glad to see that things are more or less back as they were. 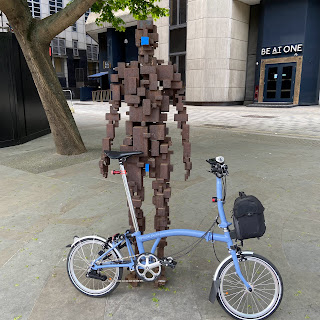 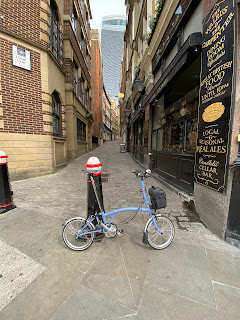 I bought a new pair of Ergon grips specifically for this Brompton and they did feel rather comfy. As mentioned pedals earlier, I am considering whether to refit the original Brompton pedals on this bike? If I were to do this I could use whatever footwear I liked, which does appeal to me. I will have to have a think about that one as I have been using SPD pedals for so long I am not entirely sure I could go back to anything else. Watch this space on that. 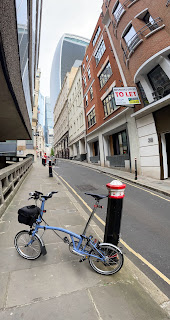 Near St Paul's Cathedral, Ludgate Hill was having some resurfacing done. Despite the signs informing drivers of this well in advance, a few didn't believe it until they came upon it. I saw a car doing a very dangerous, rapid and unexpected three point turn almost knocking over a cyclist in front of me and a couple of pedestrians. 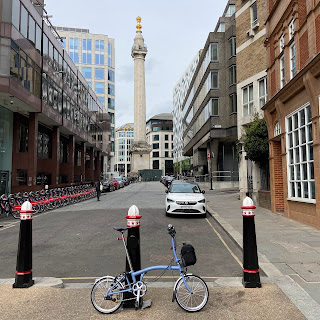 As I reached 10 miles, the air had that smell it gets just before a thunder storm. A few drops of rain did fall but nothing more than this and I was able to make my way back without the need of a waterproof or to take sanctuary somewhere!