Last Saturday, my friend of old Mark (King of the Hill) lead his Sevenoaks Weald Tour that started and finished in Kemsing. As it was a Saturday (I rarely do Sunday rides) I was willing and able to attend and by the end of it all, I was very glad I did.

I started in NW8 and rode the not too great distance to Victoria Station where with a few other Brompoton peeps we boarded the train bound for Kemsing. Perhaps like me you have not heard of Kemsing before but it was the station after Otford (the usual start from many a Kent adventure). 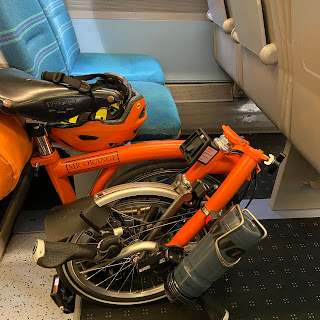 Looking our of the window as the train departed I took a quick photo of my beloved London as it slowly drifted out of view. 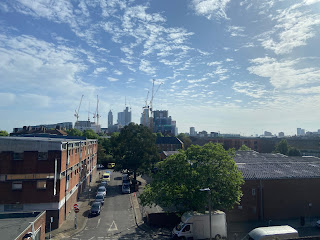 Mark was to join us a few stops in and it was good to see him, Geoff and Ian (who had come all the way from Sheffield). I cannot think when I last saw Ian but it must have been several years. 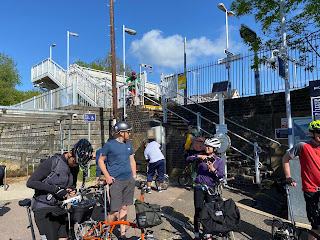 Mark had decided on us all starting at Kemsing as it was very much in the Kent countryside straight away. He was right about this and within seconds of us departing, picturesque views started to compete with each other. 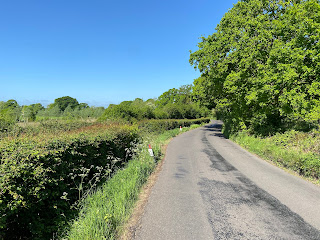 The welcome sight of oast houses with their distinctive architecture appeared within five minutes and many of us had phone cameras at the ready to capture as many of them as we dared. 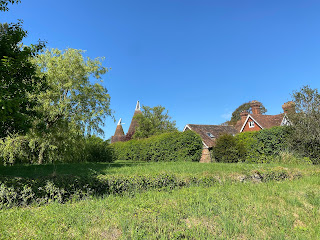 There were over 25 riders I think and for the most part we cycled quite tightly packed. I enjoyed marking the odd junction and then cycling back through the pack up to the front to have a go at doing it again. 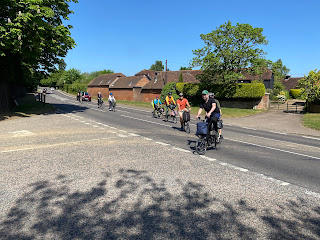 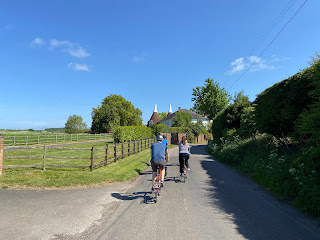 Kent is really, really pretty. When on a ride in Kent I always think this and always come away thinking it. This ride had a lovely route that took in quaint little villages, almost suspended in time. 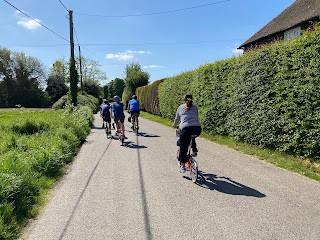 Mark's last ride into Kent had a complete lack of food stops. If anything, this one had took many! (There is no pleasing people)! The first stop was at the photo below. As we entered the seating area, other cyclists on larger wheels) were also having some refreshment. The sight of some 25 Brompton peeps might have been viewed by some of the clientele in much the same way perhaps a London chapter of a certain motorcycle gang! 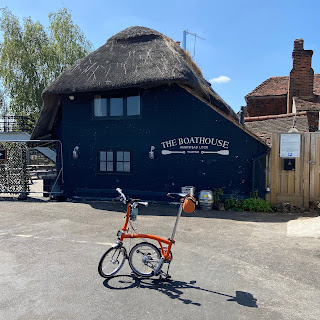 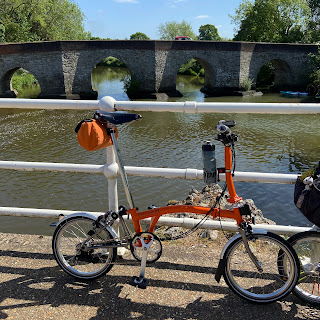 I stopped to take a photo on a small bridge so that I could use another as the background for my photograph above. The water was calm and all very tranquil. After we had got some refreshments (in my case the rather lovely ice cream you can see in the photo) going back over that same bridge the sluice gates had been opened with water thundering out and through the arches you can see below at quite a speed and force. Sadly. I mum and her three young children (perhaps from a nearby holiday camp) had waded out moments before this happened and stood trapped at the base of one of the arches. People made an attempt to rescue them as we cycled by. 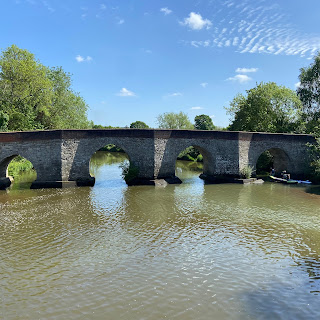 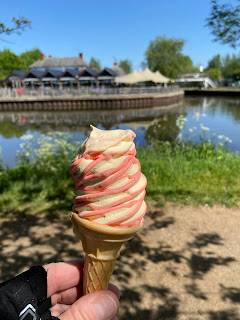 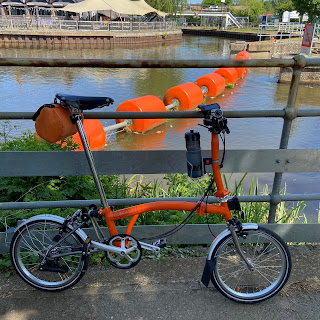 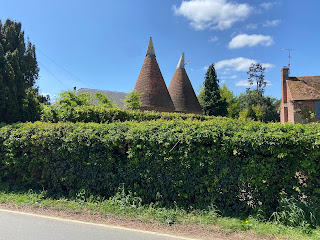 As we cycled on the views just seemed to get better and better. The route was so lovely, I do think that I will have to repeat it again with anyone who will come with me. 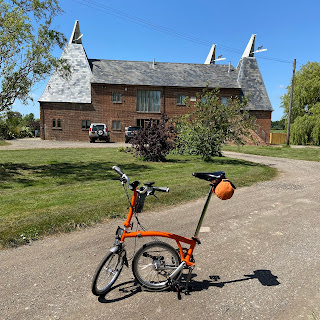 Our Brompton peloton was a sight to behold. There really is nothing quite like being in one or seeing it glide by. For both, it just brings a big smile to your face. The next stop was a branch of Sainsbury's where sandwiches, drinks and various other items were purchased for the simple job of replenishing energy. That done we were off again into the wonderful Kent countryside. 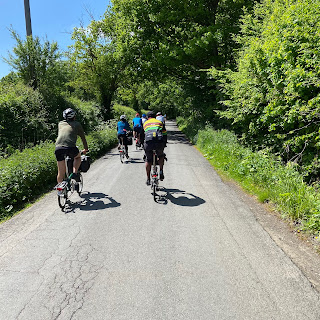 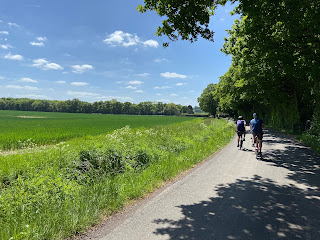 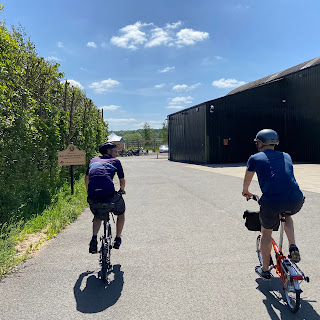 The next stop was at a vineyard. Being someone who does not drink, it was wasted on me but those who did spoke very highly of it. Geoff and I (Geoff doesn't drink either ) used the time to catch up and plan the odd cycle ride. We talked about the forthcoming Ride100 (which is next week) and our start times. Sadly, it is unlikely we will see each other as I start about an hour before Geoff does. Saying that, I will be on a Brompton and Geoff on big wheels, so you never know?! 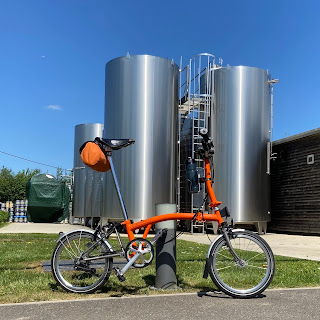 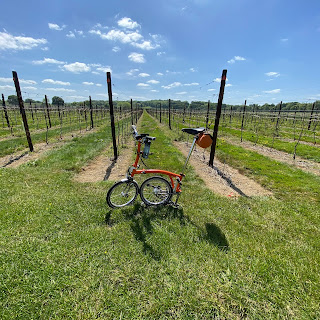 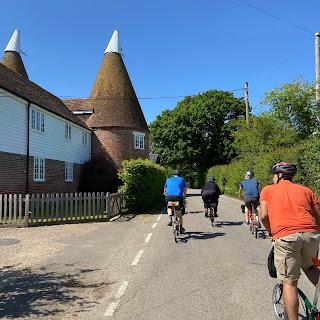 Our final stop was a very old pub called 'The Man of Kent.' This was quite crazy inside. I had to bend over to get through the doorway and once inside it was not that better, with low beams. A bag of crips and a cup of coffee later I overheard another ride talking to Mark about the need to get back to London. With only one train an hour from Kemsing back to Victoria I decided to go - along with Geoff and Amy who must have thought the same.
We had about 10 miles to go and there was to be a steep little climb before we got to the station. With the route in my trusty Wahoo, we set off with about 40ish minutes to get there. Thankfully we did and got the train back. It was delayed a little as someone who was on the train decided to walk onto the track when we reached the first stop. Luckily it was all sorted out and we arrived only a couple of minutes late. At Victoria we said our goodbyes and went our separate ways. 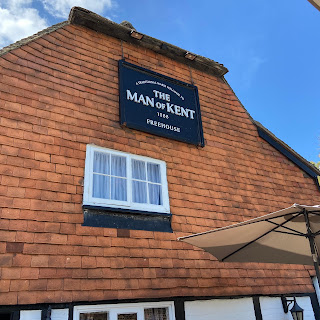 In all I cycled just over  50 miles - including the 47 miles for this ride. Many thanks to Mark for leading and to all the other Brompton peeps for always making these rides so much fun. 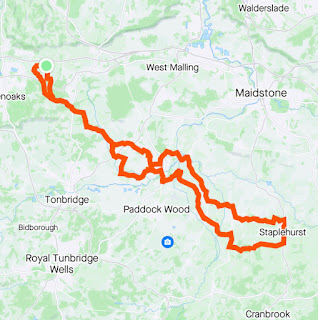 My next ride is the Ride100 next Sunday. As I type, this time next week I hope that I have not only completed the ride but home as well. I have not really carried out any specific training for this ride and hope my fitness and the day itself will me enough. Watch this space for my blog post on that one!