Yesterday was the return of the 'Cobble Monster' after a three-year absence.  The Cobble Monster used to be called the London Classic and despite not being around for a few years the tried and tested format had not changed. This is ride along lots of London's cobbled streets - Paris-Roubaix style and ride up some challenging hills.

Setting off early from NW8 it looked set to be a lovely day. Naturally, I stopped off to take a few photos on my way.

The start point was Brixton Cycles. There were a few less riders that I remember the last time I did this event however I am sure that many had already started and even more would do so later on. Mark (King of the Hill) was there as was the familiar face of James and after getting ready we ventured off in search of the first cobbles of the day. 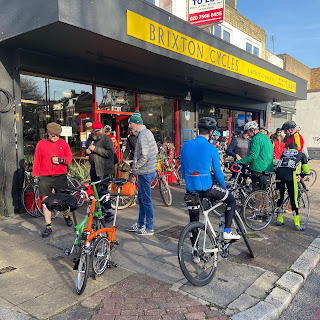 A bonus for this particular version of the Cobble Monster was that it would end at Herne Hill Velodrome and finishers would able to complete a lap of the famous circuit. This would open from 13:00 so in the interests of not arriving too early I encouraged Mark to stop and take the odd photo. 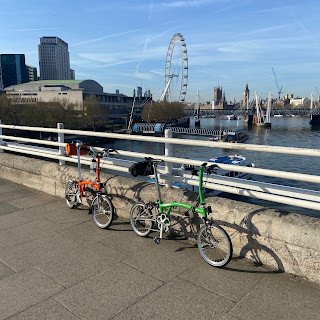 We didn't have to cycle too long before we hit the first cobbles and it was at around this point James and some of the Clarion Club members he was cycling with. 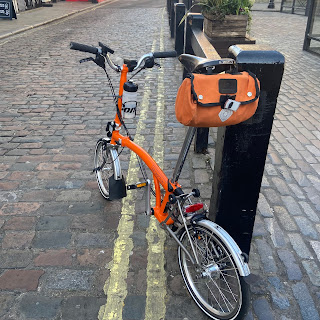 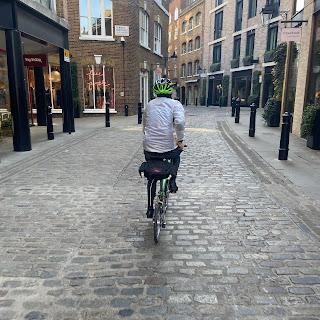 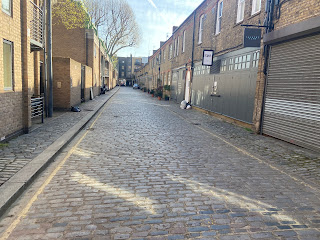 Our route took us near Smithfield Market, where I had been the day before and Charterhosue Square. Seeing that Florin Court was just at the other side I headed off for a photo. This building was used as Whitehaven Mansions, home to Hercule Poirot in the television classic staring David Suchet. 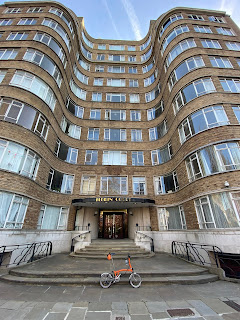 Our route was a good one as look as where possible along quieter roads  with the many cobbled streets that still exist in London being rather plentiful. 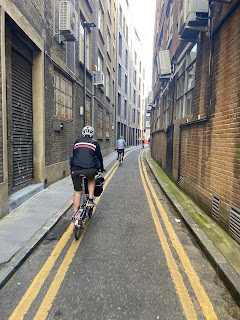 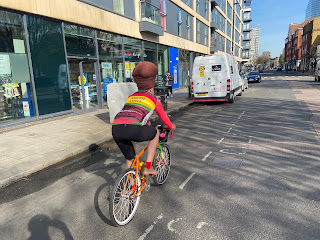 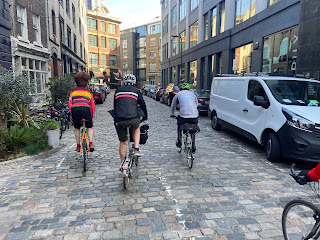 We stopped for a cup of coffee in East London. After ordering a coffee, while waiting I was eyeing up a rather tasty looking blueberry cake. As you can see this was ordered too and all consumed with some enthusiasm. 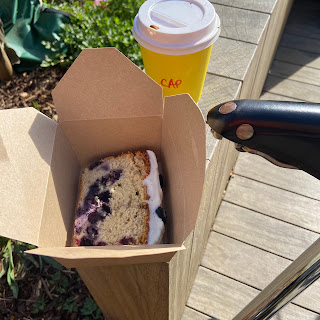 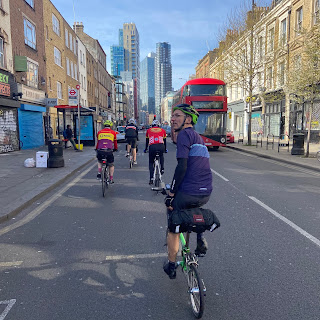 The route took us towards Wapping and over one of the many bascule bridges. I really do like these a great deal and again I passed this way not that long ago. 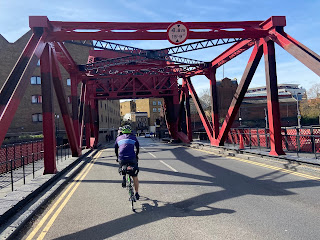 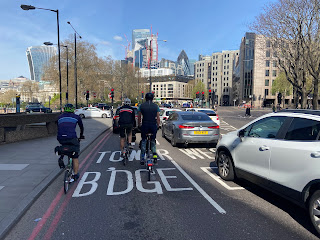 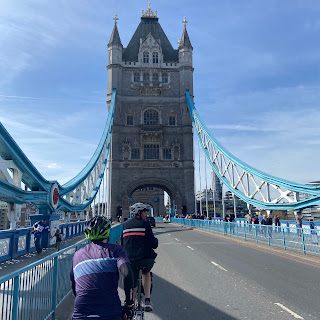 Heading back south across the river Thames meant that although there would be a few more cobbles, some of the hills would soon come into view. 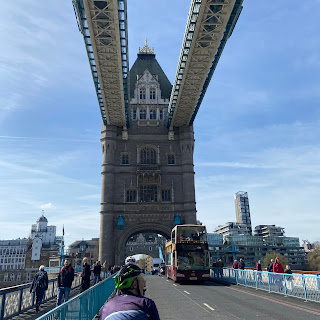 We made a slight detour to the house of the members of the Clarion Cycle Club. There we were treated to a lovely mug of coffee and biscuits. All very much appreciated!! 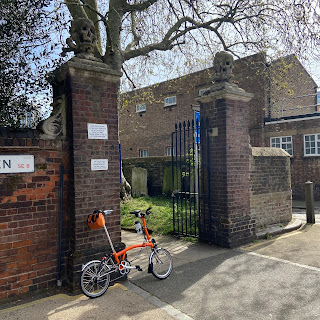 We passed St Nicholas Church in Deptford with its skulls guarding the entrance. There is a rumour that the skulls were the inspiration for the Jolly Roger on pirate ships. Very unlikely but a good story nonetheless. 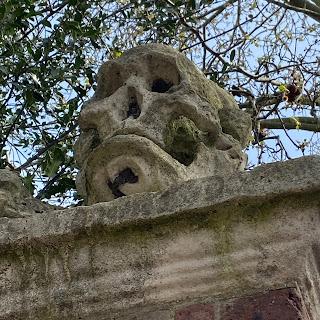 Most of the cobbled streets had their stones positioned in fairly uniform fashion. One street had them all over the place. 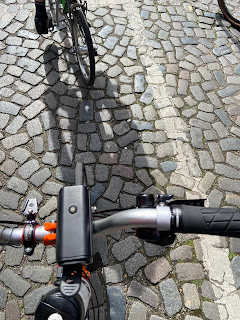 All round good egg James is a bit of an ultra endurance cyclist. He has completed the Pan Celtic Race a few times I think and is not only taking part in a version of this in 2022 he is also tackling the Transatlantic Race! Sometimes me traversing NW8 to SW7 can be a a bit of an trek so how James manages, I do not know!
The last of the cobbles resembled something form one of those Hovis bread adverts. After taking a suitable photo I made my ascent. 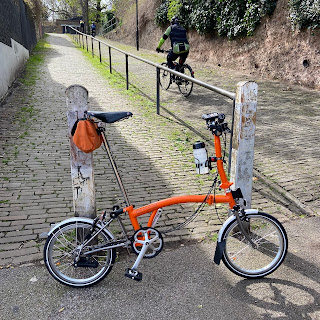 The first time I cycled up Canonbie Road I was shocked at the little kick after you got past the first turn. I have cycled up (and a few times down) this one quite a bit and it rarely fails to disappoint.  One reaching the top, turning round there are some greta views of London. 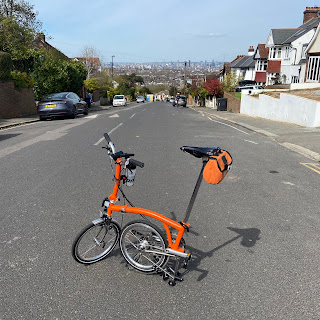 With the hills all but done the last few miles were quite flat as we made our way to Herne Hill. 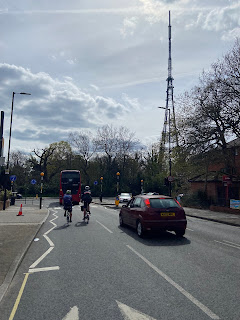 At the Velodrome we were given a brief safety check and allowed to complete two laps. This was great. After going up on the high banks for a while with a phone in my hand taking photos, I decided that the flat safety zone was my happy place. 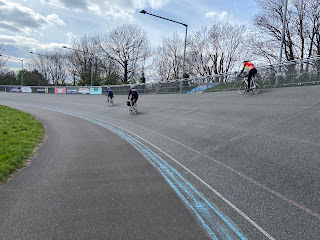 A jerk chicken meal could be bought and it was lovely. Mark and I ate this as we watched other riders take their laps of the famous velodrome. 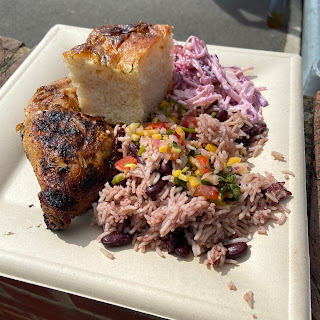 Saying my goodbyes I took one last photo of the Velodrome before making my way back to NW8. In all I clocked up 45+miles - possibly a little more. As always it was a great event and it was great to catch up with familiar faces and see some new ones too. 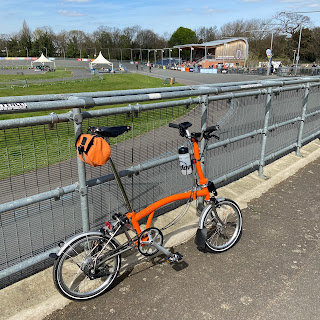 I do hope that the Cobble Monster returns for next year and if they manage to finish at Herne Hill Velodrome again, that really would be the icing on the cake. Many thanks to the organisers, the lovely people at Brixton Cycle and Herne Hill Velodrome!
Until next time, stay safe out there people. 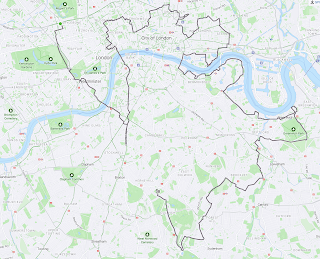