Friday marked the first official nocturnal night ride to the coast and I had been looking forward to it greatly. The meeting point was not too far from the London Eye and as it was such a lovely evening, I decided to cycle the just over 19 miles from where I had been based. Time would tell whether this was a wise move.

I briefly stopped at a few London landmarks - many more than the photos below suggest - before heading to the start point.

There were lots more people out and about and although still nowhere near what it should be like in London, definitely increased numbers. This was good to see and hear. Many sat outside pubs with blankets around them as there was a little bit of a nip in the air. 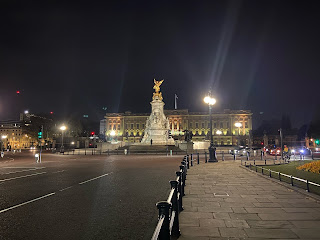 There were two groups, with one setting off at 23:45 and my group at midnight. I arrived to say hello and goodbye to a few people. Our ride leader was the gentlemen that is Tim and almost on the stroke of midnight, we were off. 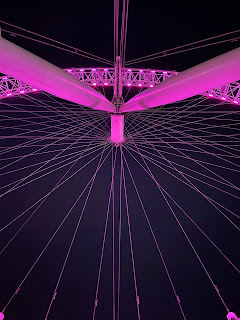 Dr John and I had been asked to take on the highly responsible role of Tail End Charlie. In our group of 10 or 11 (I cannot remember) there was not a huge amount of work for us to but when the opportunity arose I uttered the time honoured phrase 'all up!' in a gleeful fashion.
There were a few people on the ride I had not seen in ages. Mark (King of the Hill), Jenny (The Mile Monster), Amy, Sam, Kim and James. They kindly hovered at the back so that we would able to chew the fat for a bit. It was lovely to catch up on all the gossip.
We progressed at a good pace and as always, I enjoyed the company of my dear friend Dr John. As we cycled on I felt the cold. I had worn the same clothing as on recent (and quite chilly) rides with Dr John but I did feel the cold. The first half was billed as having more than a few hills and never have I relished an ascent! I used them to help increase the body temperature. 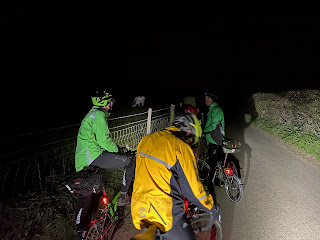 Our half way stop - a 24-hour petrol station - was sadly shut so we went to an alternative that was also shut. The third was open and a near oasis. It was huge and in addition to hot drinks, sold pretty much anything the discerning nocturnal cyclist might want.
After about 5 minutes I again felt the cold and resorted to a neck buff and light rain jacket. These remained on for the next few hours I can tell you! 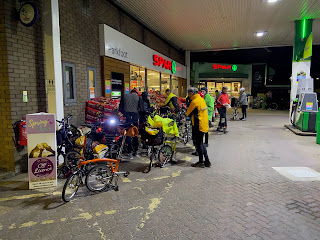 I cannot explain why, but this ride reminded me of my first ever night ride to the coast almost exactly eight year ago to the day? I really cannot put my finger on it and tell you why? I have been on more night rides to the coast in the proceeding eight years than I can remember but this one reminded me of April 2013 when I rode to Brighton on an Orange Titanium with Mark (King of the Hill).
With dawn approaching we reached a medieval bridge in rural Kent. This county, is perhaps one of the most beautiful in terms of it scenery, and it didn't disappoint. We were all there taking photos and recording the sound of the dawn chorus. 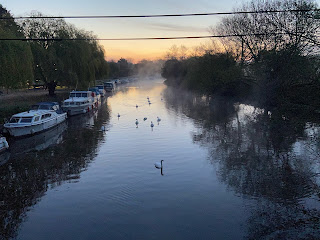 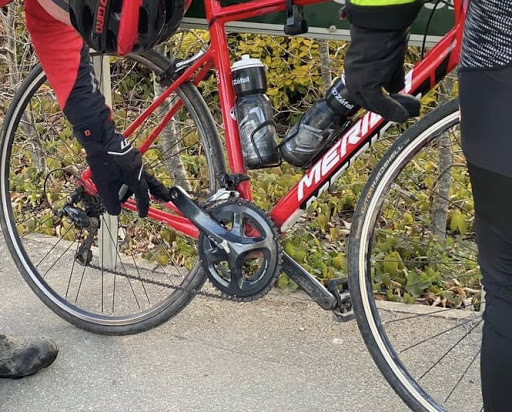 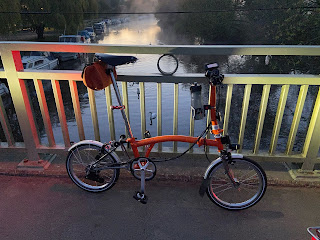 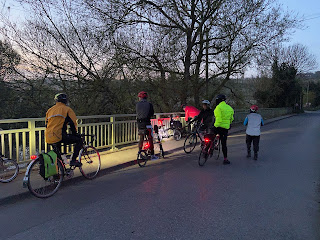 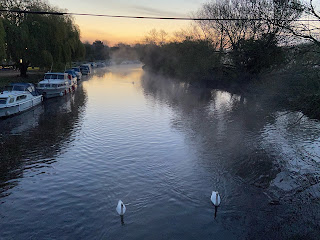 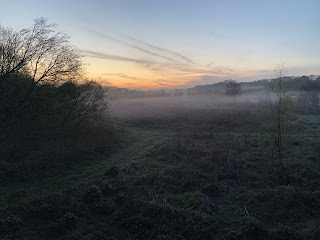 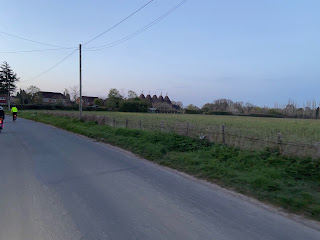 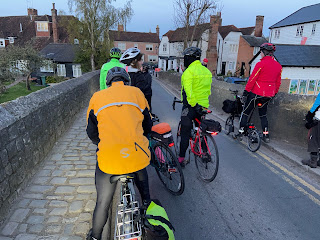 Every resourceful, Dr John had kept himself warm, by using a free newspaper he got from the train station to stuff down his front and thus acting as a wind insulator. 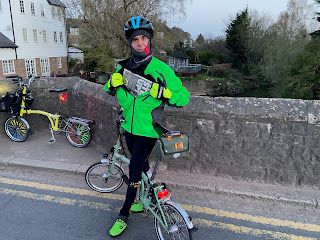 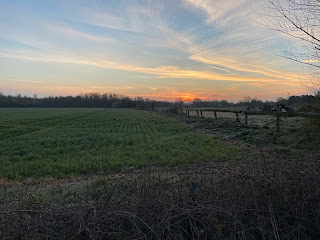 Little villages came and went, all competing with each other for the top place in the picture postcard competition. Oast houses - a feature of Kent - designed for drying hops as part of the brewing process, were everywhere. This spurred Jenny and myself to go into photograph anything and everything. 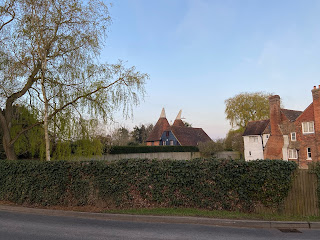 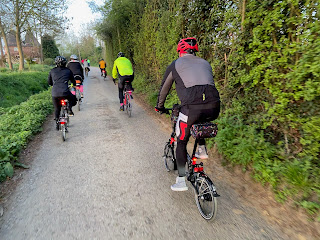 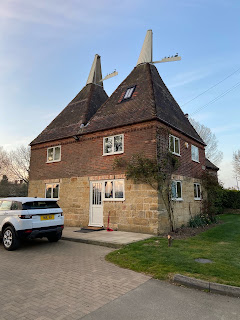 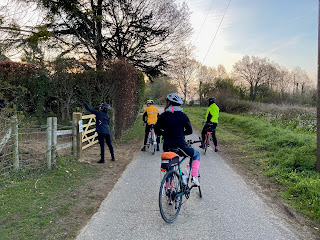 With a good few miles to go before the finish, James had an issue with his pedal and crank. It appeared the pedal had been cross threaded and thus kept unscrewing itself. For him the ride was sadly over and he and Kim made there way to a station that was luckily not too far away. 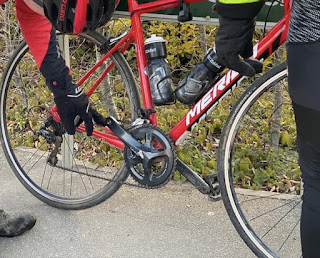 A little llama proved to be very photogenic and I think most of the Brompton riders took a photo. I am convinced that it even tried to smile for us. 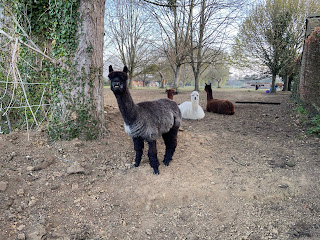 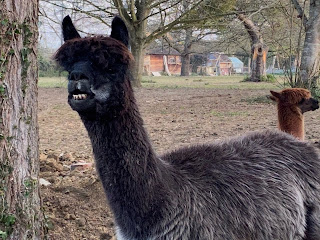 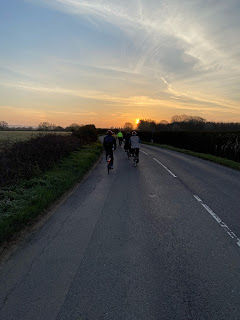 The next few miles we pressed on, rolling through beautiful countryside with the sun rising and birds happily singing away for the start of the new day. It was stunning and again one of the draws of a ride of this nature. 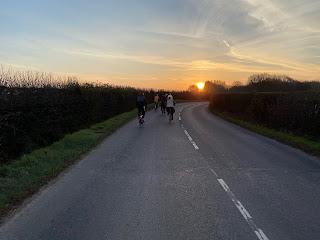 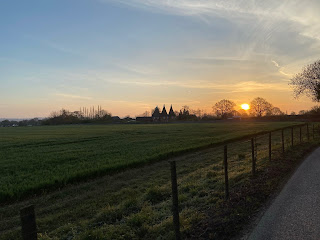 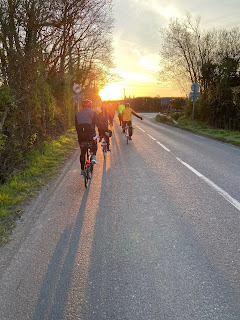 After clocking up just under 67 miles we had reached Ashford and posed in front of a large WWI tank. That done and wanting to get the 09:16 train back to London I headed off to Ashford station with Dr John. At 09:54 we arrived back in London at St. Pancras. Less than 30 minutes later I was back home. 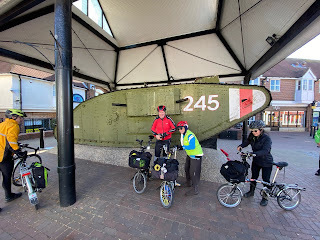 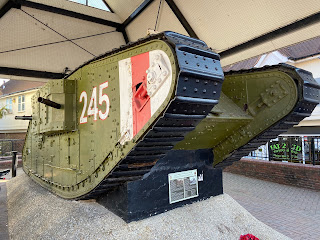 This was a wonderful route and a great little ride. I think that the 19 miles to get to the start was fine and didn't create any issues for me. After a shower and some food I had a few hours sleep and felt pretty good afterwards, considering I had cycled almost 90 miles in total.  Many thanks to Tim for leading the rode and to my fellow participants.
The next official ride is in a few weeks time and I look forward to it. Of course, I may well be able to get in another before this.
Until next time, stay safe out there people. 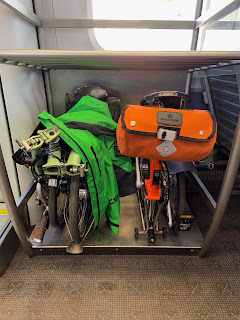