London Ride46 on a Brompton 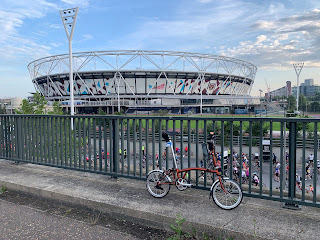 I got up at an ungodly hour and headed off to central London with everything I felt that I needed. London was very quiet when I arrived there just before 06:00. Putting the location to near where my wave was starting at the Queen Elizabeth Olympic Park roughly ten miles away, I headed off at a very sedate pace. 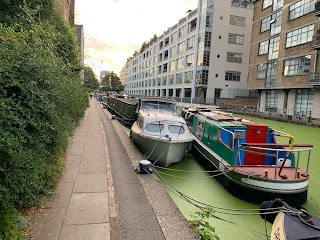 The route it took me on was all but the same as that to get to the start of the Dunwich Dynamo. A few other cyclists where along following this route and we exchanged wishes of good luck. 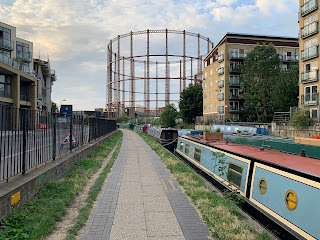 Knowing I was early - as I did not want to be late - I looked for a few photo opportunities. The first came in Victoria Park. As I took the photo below I jogger went past in quite literally bra and pants - not of the sports-clothes variety. Being the polite sort of chap I am, I simply said 'morning...lovely day for it' as she passed by. 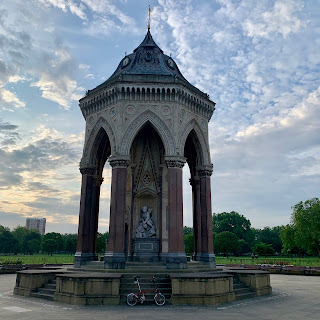 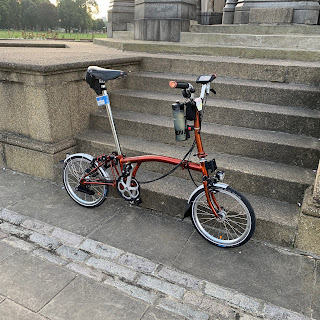 Part of the route was on the Greenway Cycle Path that I have been on several times before with the Brompton crowd. I arrived at the Olympic Park in very good time - still too early - so decided to park the bike up and watch the world or in my case cyclists go by. 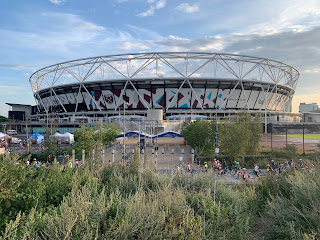 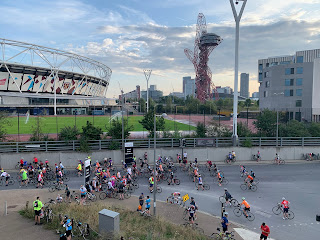 My last bit of the route to my start point was back on the road again and it didn't take too long to find it. I arrived a few minutes before it officially opened so I sat down and waited. 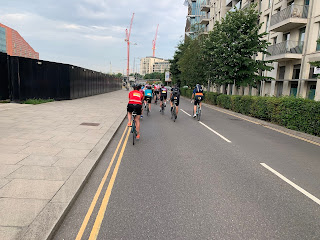 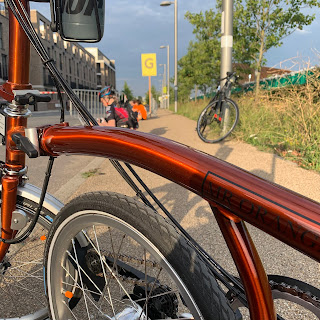 I had decided to take my Orange Flame Lacquer for this ride. I took the view that my Orange Special Edition went to the Dunwich Dynamo, so it was only fair I bring my new addition out for a spin. I tried to pack as minimalistic as I dared. One water bottle and a incredibly small Specialized saddle wedge that held my spare inner tube, CO2 bottle and a few other essentials. 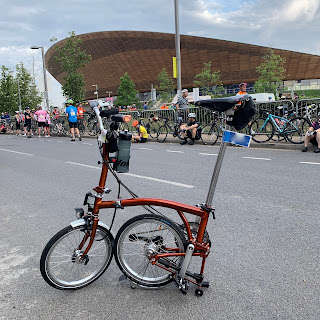 The waiting then began. It was during this waiting I actually started to get nervous about the ride. It would be true to say that 46 miles is not really anything to me. I have cycled this just to take some photos of my Brompton bikes. Perhaps tit was the excitement of the ride ahead and being keen to get going but the butterflies were there. Fellow Brompton rider Jenny who was doing the Ride100 posted on her Instagram feed that she was feeling the nerves too. I have to say that I would have been feeling them too had I being doing the longer distance. 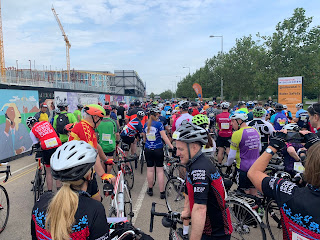 A few people were kind enough to say that they liked my Brompton and asked about it. This was to happen quite a bit throughout the entire ride and I felt at times like an unofficial ambassador for brand Brompton!

As I gazed around I was in a sea of carbon road bikes. Almost all were lighter, had more gears and would complete the 46 miles quicker and with less effort. As I looked at my Flame Lacquer Brompton I could not help my biased opinion that it was better, more stylish, more original and dare I say, less dull. 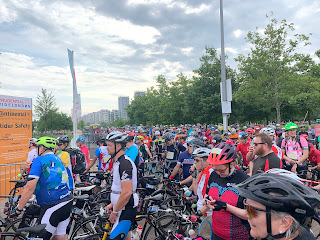 A good 30 minutes before the official start time of my wave we started moving. This made the time fly by. Before we knew it we were close to the start line, music blaring out and countdowns to be heard of the other waves getting off. I wanted to get going and was excited. 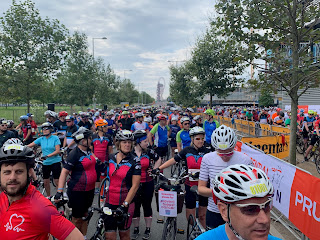 The moment came and almost to the very second we were off on the advertised start time for our wave. The first few miles were glorious. I was in my element and cycling along at well over 20 mph. I relished in cycling at speed and keeping up with and in some cases overtaking some fellow participants on road bikes. One roadie commented on whether my Brompton was one of the new Brompton Electric bikes as he seemed amazed a Brompton could roll along at over 20mph and keep up with him for a while.

For the first ten or so miles I was averaging 19 mph - which is what I had done on my Condor road bike the last time I was fortunate to participate in the Ride46. To do this I had to work hard. My brain started to engage and I realised - with some disappointment - that there was no way I could sustain this pace. As such I eased off...slightly!

At Richmond Park I was on familiar territory and it was wonderful seeing so many cyclists all around me and in front of me. 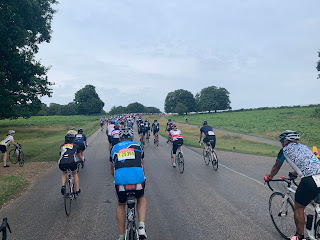 The many people lining the route were wonderful. There were cheers and incredulous glances when I rolled past...on a Brompton. Lots people were lining the route, with posters up for their loved ones. It was also quite humbling that many riders were riding to raise funds for charities that were very specific and personal to them.

For some reason the hills that I remember from last time - the one near Wimbledon especially - didn't seem half as severe. I like hills and have had lots of practice this year and made my ascent steadily. A few roadies also on the Ride 46 were off their bikes or quite slow. One rider was not pleased - not in a joking way - that a Brompton had overtaken him and shouted out 'bloody Brompton!' Later on when we made the descent he overtook me, shouting out 'not so fast now!' I took the view that he must have several issues!

I stopped for water twice and boy did I need it. The volunteers running all the water stations were excellent and it was great that a few of them were Brompton riders as well and giving me encouragement for the rest of the ride.

At a certain point in the ride (I cannot recall when) the Ride46 and Ride100 split. As I cycled along I was in awe at many of the cyclists who had almost broken the back of the Ride100 and yet looked fresh.

The last 7-8 miles I started to speed up again and resisted the urge to either chat to people about Brompton bikes, take photos or videos! This is something I really have to suppress on rides like this! With The Mall coming into view I got my phone out to take a short video and photo of the finish straight. I tried to take a selfie as well - it is the modern way - but ended up taking a blurred photo of my feet.  I have spared you that one! I did it. The Ride46 was conquered. 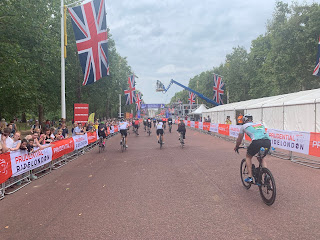 It took a little while to get my medal due to the huge number of people also finishing but with my medal round my neck I walked the bike up towards Hyde Park Corner and then cycled home.

This was a lovely event and I am really pleased I got to do it a second time. The organisation in the build up and on the day was excellent, so many thanks to the many people that make this possible.

Ironically as I waited in line at the start I got an email informing me that you could sign-up for the Ride100 in 2020. I did. If I was lucky enough to get in, I think that I would have to have a go at doing it on a Brompton and try and raise some funds for a couple of charities. So, in the meantime I think that it is only prudent to cycle the Ride100 route on one of my Brompton bicycles as a way of preparation just in case! Hope to do this before September if possible... 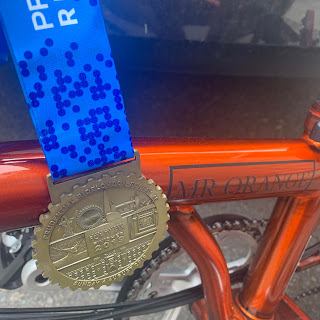