After what has seemed like ages, Dr John and I decided that Friday would be the perfect time/weather for a night ride to the coast - our favourite London to Brighton. As there had been some talk of train/tube lines been closed or disrupted, we chose to meet as close to 23:00 as we could and depart as soon thereafter.

Our meet location was the usual one not too far from the London Eye. Dr John was there before me and after a getting routes loaded, lights turned on, we were off.

The weather was as predicted near perfect - warm, gentle breeze and very much short sleeves. The first few miles up to Clapham South we took at a slightly quicker pace as we wanted to avoid the clubbers, taxi drivers and pedestrians that fill the area and occasionally do unpredictable things. This worked well and before long we were on quieter roads.

Our pace was purposeful and the miles flew by as Dr John and I chewed the fat about all sorts - which is always one of the welcome features of our rides together.

The cattle grid at Farthing Downs in Coulsdon in the London Brough of Croydon always marks the point at which the urban really does change into the semi-rural and then rural. At the top we looked at views down to Croydon central. Gazing skyward we could see that it was cloudless with stars and constellations visible. I tried to spot a few from my memories of Sir Patrick Moore and his programme 'The Sky at Night.' Failing dismally, I used and app on my iPhone which indicated the Milky Way was to our right. I have had this app for a number of years and not used it in anger. Of course I could not see this with the naked eye but I was nonetheless proud of locating it for once! 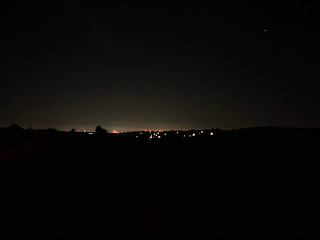 As we cycled along Tawny Owls could be heard making their wavering 'boohoo' call. This was followed by foxes, bats and - the highlight - a young badger that ran straight in front of us.

Our normal halfway stop had formally been outside a scout hut in Burstow where we have brought our own food/snacks and eaten them while standing outside. Dr John did a little bit of research and found a 24-hour service station that had a seating area, toilet, food, snacks and a hot drinks machine. This came at almost 29 miles.  Sadly, the hot drinks machine was not working so we bought a cold bottle of water and bot of us had a chicken and salad sandwich - at least I think it was chicken! Feeling suitably refreshed we headed out to continue. 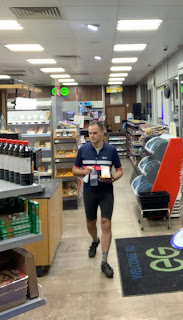 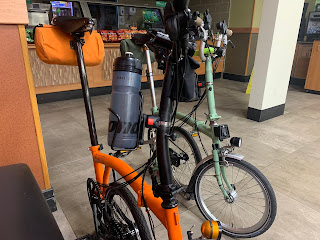 For the last few minutes inside the service station I started to feel cold. Dr John said that this might be due to the air-conditioning but I decided to put on a light packable jacket. I needed to as I felt really cold when I stepped outside. Added to this was the sudden appearance of fog. As soon as you hit it the temperature went down by a considerable amount. We pressed on towards Turner Hill, hoping the the exertion of making an ascent would warn us up. By the time we had reached the top it must have worked as both of us took off the boil in the bag jackets we had been wearing.

We were making wonderful timing and pressed on for perhaps the highlight of the ride - Ditchling Beacon. There are many climbs in the UK but Ditchling Beacon is rather famous - perhaps because of the annual London to Brighton charity cycle ride. At 0.9 miles it has an average gradient of 9% and a maximum of 16%. It isn't easy by any means and I suspect much harder on a Brompton!

The base of the Beacon came upon us quite suddenly and after a few last minute preparations we made our ascent in darkness. It was before 05:00 in the a.m. after all. We rode up the Beacon together and after its several false summits we made it. Still dark, with nothing to therefore see and take a photo of we cycled towards central Brighton.

Most of the last few miles are downhill and this was wonderful! Pedals could be turned easily on the flats and the last little bit into Brighton was all freewheeling. We decided to head for the station and at about 05.10 we had done it. With our train departing at 05:26 we had the time to buy a coffee and almond croissant before boarding our train - which must have been my earliest departure from Brighton. 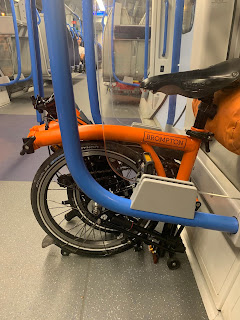 The journey lasted a little over an hour for me and I spent some of this time calculating the quickest route home, barring in mind there were some part-closures of various lines. With my route sorted I said goodbye to Dr John and got off at London Bridge. I was home by 07:15 so was rather pleased.

Another great ride and many thanks to Dr John for agreeing to do this...again! I cannot think how many times I have written this but nocturnal rides are addictive. There is just something about them. Lots of people view the notion of cycling through the night to a seaside location and then getting the train back as insanity but they are great fun! Until next time... 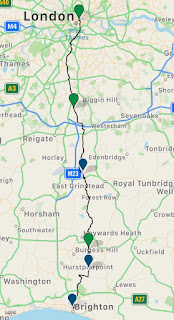 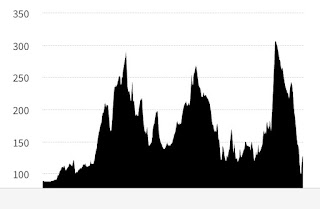