Collecting my ride numbers for the Brompton Ride46

With the Ride46 happening on Sunday, today was the day I went to collect my ride numbers at ExCel in east London.

Getting there was a fairly painless affair and I arrived just after 10:30 a.m. There were lots and lots of people doing the same and as such when I boarded the Docklands Light Railway train from Canning Town to Custom House, almost everyone was either on the train to do the same as me or go to the Cycle Show that was also taking place.

Making my way to the registration area I could see that the Ride46 was very much the country cousin to the Ride100. There were only four booths where you could register for the Ride46 compared to those of the Ride100 which had lots and lots. 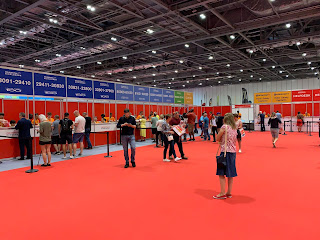 Registration was quick and simple and the staff were really friendly and helpful. In less than a minute I had my clear plastic drawstring bag, containing my all vital ride numbers and I was off.

I had a very brief look around the Cycle Show but there was little of interest to me. A few years ago I remember this location being the home to an indoor version of the Nocturne Folding Bike Race. 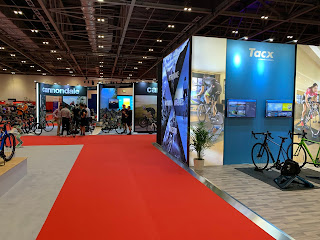 Brompton were not there but a pop-up Evans Cycles store was and had a few of them dotting around. I had another look at the Brompton Electric. It really does look great but almost £3000 price still causes me to take a sharp intake of breath. 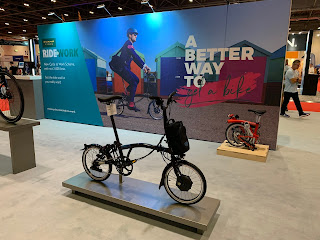 I didn't cycle to Excel but had thought about it. I decided against it as I knew I had to be elsewhere where even a Brompton would not be welcome. One very strange sight was seeing a pigeon walking up and down a tube train carriage, with no intention of leaving. I think it was on a Circle Line carriage. How it got down there I do not know? 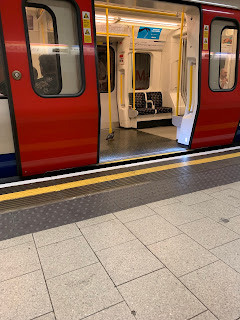 Before heading off to my meeting I stopped off at a non pop-up Branch of Evans Cycles to buy a 'Rixen and Kaul' bottle klick. This allows a more traditional bottle cage to used on a Brompton stem. I do like the Monki Clip that is currently on there however I want to be drink while cycling which is much easier using the Rixen and Kaul.

I haven't trained for the Ride46 but I have certainly put in more than enough miles to cope with it. The 46 miles doesn't really hold a great deal of fear for me and as long as I can fill up my water bottle at certain points I'll be happy.

If you are at the Ride46, Ride100 or just watching out for someone who is. should you see chap on an Orange Brompton, shout out hello as it may well be yours truly.
at August 01, 2019

Email ThisBlogThis!Share to TwitterShare to FacebookShare to Pinterest
Labels: Ride46