During the week Dr John kindly invited me to an Audax that was taking place yesterday, starting and ending in Aylesbury that would be 113km or about 71 miles in old money. The ride would be Brompton bicycles and apart from the challenge of it all, my two old Orange Brompton bicycles that I had sold to the gentlemen that are Steve and Simon, would be ridden by said gentlemen. Checking logistics, I was in.

I set off early, driving to Aylesbury. Parking the car in the recommended car park I could see lots of other cyclist on all kinds of bicycles. Steel, titanium and carbon were all very popular but Dr John, Steve, Simon and I would be the only people mad enough to do it on a Brompton!

This would be my first Audax. In truth apart from knowing it was long-distance cycling I didn't know too much about it other than people did it to qualify for famous events like Paris-Brest-Paris. It was therefore a shock that this ride had to be competed in a set time, answers to questions only participants who had complete the could answer and proof that you had been to certain locations by obtaining a receipt from a shop.

Where I arrived at the official start, Walton Parish Hall Dr John was already there along with a few participants getting ready. There was a very friendly atmosphere and tea and the light refreshments were provided as part of the entry fee.


Soon thereafter Steve and Simon arrived with some familiar friends. It was lovely to see the old bikes again and I was happy they they had both gone to great homes.


I had stupidly left my water bottle in the car so had to make a mad dash to go and retrieve it as we were nearing the 0900 start!

With bottle secured we headed off. For me this would be the unknown. Enquires as to whether this ride might qualify for a place on Paris-Brest-Paris were greeted with a polite no and hearing about what one does need to qualify for it, a cold shiver travelled down my neck.

Our progress was brisk and the countryside was lovely. My usual weakness of stopping to take photos was impossible as we were on a strict time limit.


After a few miles we stopped to regroup. Steve and Simon were formidable cyclists and set a great paced for the rest to follow. When we did stop Dr John proceeded to prop his leg up on anything that didn't move so that he could stretch his legs. It was for me but a step away from the late Dame Margot Fonteyn. 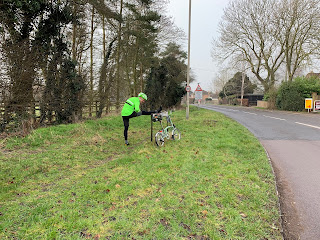 After only a few miles the roads were engulfed in a heavy fog that brought temperatures down a tad. For me this only added to the adventure. 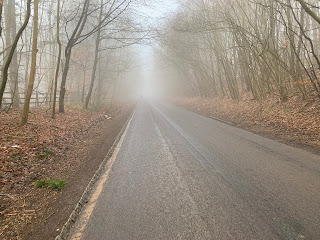 At roughly 20 miles in the hill that on the ride profile looked formidable, proved to be formidable! It was a long and gruelling climb well and truly up into the Chilterns. I soon bottomed out on the 6 gears my Brompton possessed and then it was a case of just trying to keep going. Large Red Kites who had been our constant companions throughout the ride almost seem to be laughing overhead at four people doing this ride on Brompton bicycles.

The the top finally arrived we headed towards Reading and passed a large common of land where the fog was back and even worse than before. 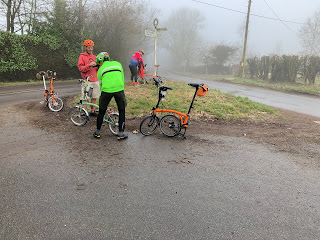 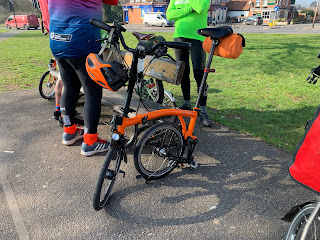 The next few miles proved to be easier and at Caversham we arrived at the official Audax control where one had to buy something and get a receipt to prove you had been there. I am not sure I have ever stepped a foot inside a 'Budgens' before but it was an oasis. The ploughman's roll was eaten with enthusiasm on a park bench not far away.

While there we talked to a lovely lady who asked about what we were doing. She told us that the last time she had a bike was during the war. It was a heavy steel affair with a metal seat. I could relate to what this might have been like as I eyed the Brooks saddle on my beloved Orange Brompton All Black. When I cycled to Whitstable on it, I would have suggested it might have been made of metal too! 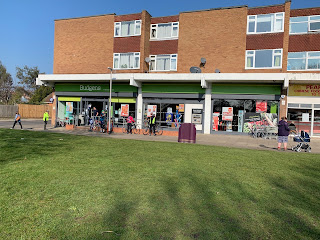 As we started the return back to Aylesbury the sun shone, the fog was gone  and it was a glorious day for cycling. Snowdrops and crocus were out in bloom adding to the countryside idyl. 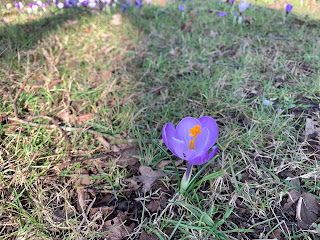 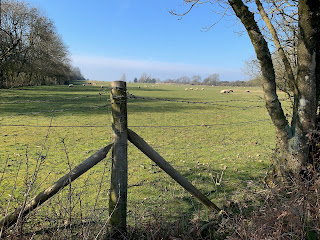 We came upon the hill that we had climbed earlier in the day and descended this at speed. As I made my descent I could not believe that I had cycled up it at all. The descent seemed to go on and on and and as I got glimpses of cyclists making their ascent on the other side of the road, I could see how hard it was on their faces.

We stopped briefly at the final control which was a garden centre where again we had to buy something and get a receipt.

I have to confess I found the last 30 miles hard going and could not seem to go faster than the pace I was feeling comfortable at cycling. Dr John almost at the end of the ride was complaining of cramp. With about 5 miles to go I had a second wind and found that I could keep just about pace with Simon and Steve. We remained in a little peloton until Walton Parish Hall came into view. 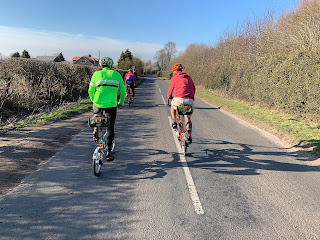 We had done it with some time to spare. I had completed my first Audax. We retired to the seating area and had a few cups of tea, and light refreshments that were in abundance for those who had completed the event. After chewing the fat for a while and hearing the truly epic plans Steve has - some on his Brompton - we went our separate ways and headed home. 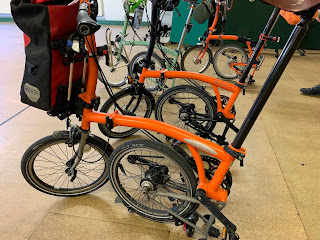 This has been my longest ride this year and it was hard earned. When I got home my legs were telling me that I had just done 71 miles. I didn't take enough water was my first thought and if I do something like this again, one bottle isn't enough for me at least.  I enjoyed this ride. It was a challenge, the company was great and it was my first Audax. Would I do another? I am not sure that anything longer than the 100km events is for me if I am honest. I like doing things on my terms rather than to a schedule. If I could find a 100km event and get someone to go with me (I wouldn't like doing this alone) I probably would give it a go. 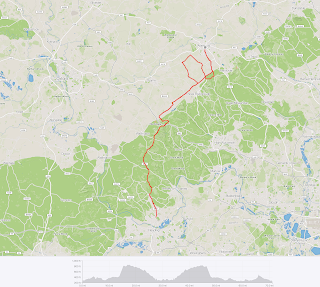 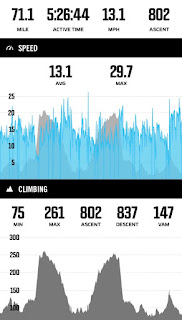