I have been using my Cateye Volt 300 for a number of years as a commuter flashing light but have found that the battery has all but given up the ghost. I have therefore been on the search for something to replace it. My search brought me to the 'Moon Meteor Storm.'

I actually bought a Moon rear light last year and was very impressed with it, so I was already aware of the company based on the quality of that light, felt that their front lights deserved a look. With a £30 'Evans Cycles' voucher not used I saw that the Meteor Storm was on offer for £54.99 and had been reduced from £99.99 at some point in the past. This meant that the light would only cost me £24.99.

The light is not the most powerful of the ones that Moon do but it does have some pretty good statistics. I won't use it but it does have a boost function that can pump out 1700 lumens for two hours. The other runtimes were more appealing:

The flash modes are even more impressive in terms of run time / lumens and these are probably what I will be using the light for the most:


The light is substantial in terms of built quality with a CNC aluminium alloy body. It weighs about 200 grams and is 115 x 48 x 34mm (W x D x H) in size. It is a solid, well made light that looks as if it could stand up to the rigours of a daily commute light. It is water resistant and the rubber USB flap is magnetic so quickly snaps into place.

The light has a very good mounting system and I don't think that there is much chance of the light coming loose or the handlebar bracket for that matter. It was actually quite difficult at to get the light off the mount but I suspect that was as it was new. After a few days of use it was much easier doing this, more so that I was more used to the way it went on and off.


The top of the light has a matrix LED display to show what mode you are in and the status of the battery. This took a little getting used to. For example mode 1 has 5 x LEDs displayed, mode 2 has 4 x LEDs and so on. Just a case of getting used to it. Charge times from empty to full was about 6 hours (I think) as it has a cutoff when it has reached full charge.

Incidentally, I found out when reading the very simple one she of A3 instruction guide that you can get replaceable batteries for this light. I am not sure it is worth it as two batteries needed to power the light cost about £40. It remains an option though.


The light has 2 x CREE XM-L2 LEDs (whatever that means) but I can tell you the light output and the runtimes are impressive to say the least. My Exposure Toro Mk 7 is an incredible light but the flash modes on the Meteor Storm are much better and the lumen verses runtime is not too far behind. I had bought this light primarily for is flash modes to replace the Cateye Volt 300 however I could happily use this light for night rides to the coast as a light in itself.

One really goo thing about the light is it comes with a few extras. The first is a USB remote switch. This is small rubber coated and would allow you to cycle through the different modes quite easily.


The next is a helmet mount. I am not overly sure I'd use this but you never know and it is great that it is included.

Okay the all important question. Do I think the light is worth £54.99? I would have to say absolutely. It's a solid performer and having used it on a 10 mile night ride yesterday I came back liking it a great deal. The fact that I was able to get it for £24.99 as I had a voucher left over from Christmas was a bonus. 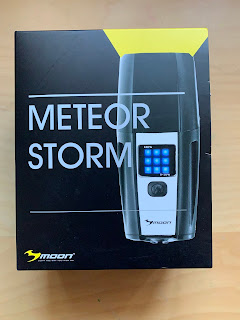 The light is available from a few retailers and if you shop around you might be able to get it for slightly less than the 1p under £55 asking price. There are lights out there costing a great deal more that are nowhere nearly as good. Highly recommended. 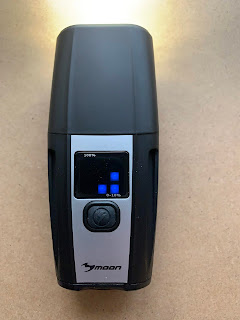