Evans Cycles have been putting on their 'Ride It' events for a few years and I have attended several of them. The West London version starting and ending at Osterley Park would be the fourth time I have participated in it.

I had actually booked a place on this event ages ago. In fact, during the Christmas period I decided that this would be a great event to out in the diary, as it would be only a few weeks into 2019. My view was that it would start the ball rolling on the rides that would hopefully follow.

Up bright and early, the sun was already shining and it was set to be a lovely day - which it was. Saying goodbye to Mrs Orange and the Orangettes, I drove to Osterley Park in good time as there was little in the way of traffic. Arriving there just after 0800 I could see lots of other riders unloading bicycles. Virtually all other riders were on road bikes, with just a few on hybrids. I was the only person on a Brompton.

Registering for the ride, a member of the Evans staff enquired whether I was part of the London based Brompton Club. I think another member of staff asked if I were the writer of this blog. I timing-chip sticker was placed on the side of my cycling helmet and I was given a rider number to attach to the handlebars. (More about the handlebars later).

Making sure all was good with the bike - and me - I made my way to the start where we had a talk about the route markers and some adjustments to the route. This done, along with the other riders our barcodes were scanned and we were off.

As it was such a glorious day I opted for the medium 52 mile route. Had it of been different in terms of weather I would probably have done the short 42 mile version.

The last two times I took part in this ride I opted for the short route - the first due to weather and last year due to commitments later on. I have always come away feeling that the route was far from scenic. I don't know what was going on today but the route was...lovely! There was plenty of green stuff and what green stuff there was as I cycled along was very picturesque.

As I cycled along a lady from the Friday ride to the coast group said hello as she recognised me. This happened a few times throughout the ride with some kind enough to say that they enjoyed reading my blog.

Several riders could not believe that I was participating on this ride using a Brompton and asked how the bike was for longer distances. I didn't tell them about all the other distances I have completed on my Brompton and just said that it was fine.

Obviously I took my Brompton on this ride. It was a good opportunity to try out my new Joseph Kuosac handlebars and Ergon grips. I liked them both and found felt very comfortable for the whole ride. I suspect that I would not have enjoyed the ride as much on an S type and I was glad at the end not to suffer from shoulder and neck ache.

The temptation to take photos was great! The first location I gave way to was when I saw the sign for Pinewood Studios. Across from where I took the picture below I could see the 'Roger Moore Stage' and thought if only I could get in there to take more photos! The first feed station was at 20ish miles. Here you could top up your water, have some slices of cake, crisps, jelly beans, banana and a few energy bars. It was all very friendly and there was more than enough of everything. 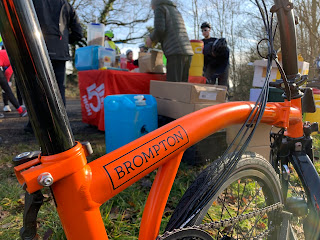 Feeling suitably refreshed I wasted little time and headed off again, not as I was in a rush but more that I was really enjoying the ride and wanted to see what was next.

The next feed station was outside a branch of Evans Cycles itself in a retail park at about 30 miles. Again there was lots of food and friendly and helpful staff.


The route had 522 metres of elevation which I enjoyed. There were some ups and downs for the first 35ish miles but nothing too bad. Saying that there were a couple of very steep ascents. One in particular (I don't know where it was exactly) was a beast. It was steep and just went on for ages. The narrow road with many impatient drivers wanting to pass and then halt in front of you to let other cars go past, resulted in me grinding to a halt and having to get off.

It really did seem to be freak weather - especially as I type this on a grey, dull and wet Monday afternoon - and a layer was taken off pretty soon into the ride.

There were a few long stretches where there was a considerable headwind. I tried to tuck behind some roadies but after three miles of keeping up with them, they slowly broke away and were gone. One thing I noticed about those on road bikes was the large number parked up by the roadside, wheel off and repairing a puncture. Several times throughout the ride those on road bikes would pass me, only for me to pass them when they had a puncture.

With the sun shining and the back of the ride broken I cycled the last few miles. On the outskirts of Osterley Park I saw the familiar face of the gentleman that is, and fellow Bromptonian Andy. We had not seen each other for years. Saying goodbye I headed back into Osterley Park and collected my finishers medal. If you have ever read my blog for a few years you will know that I do like a medal.

I have another of these rides in April, the 'Evans Windsor Ride It Sportive' and I do look forward to it. The organisation of these rides is extremely good and with the odd discount code it was £20 well spent. Until next time.