The Electric Brompton has certainly caused quite a stir since it was announced. There has been rumours of this happening for ages but the reality is now here and Brompton are even taking pre-orders.

In a first for my humble blog, one of my Brompton colleagues and all round good egg, Simon S has written a rather superb review of the Electric Brompton. If you have not gone for a test ride yourself, Simon's review certainly gives food for thought. All the words and photos below are his. Many thanks to Simon for a quite excellent review. Enjoy. 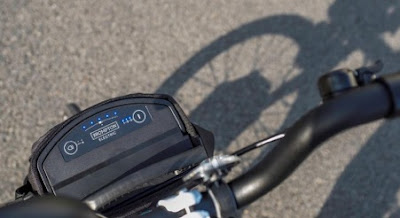 It was a long time coming, but the Electric Brompton is finally here, and last week I got to try one during a Cambridge demo day. What was it like? Is it the future?
To give you some background, I own three Bromptons and love gadgets. Last winter, I converted one of my Bromptons to electric to learn about what makes a great e-bike and this review is written based on this experience. The opinions in this review are my own and I am not associated with Brompton Bicycle in any way.

Well pretty much like the standard bicycle, albeit with some slightly strange front luggage. 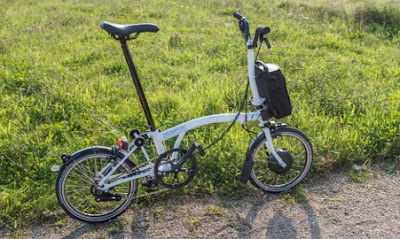 The approach Brompton took has the battery in a detachable front bag and a motor embedded in the front wheel. It is pretty conventional and there are already a number of similar pre-existing conversion kits on the market. It is a proven approach that works well and still allows the bike to fold. The 2-speed version of the bike was quoted as being 13.9kg with the battery pack weighing 2.7kg. The battery pack detaches for easier carrying, and whilst you notice the extra weight it is not excessive. The one time you will notice the extra weight of the motor is when folding and bringing the front wheel round to hook it in position. 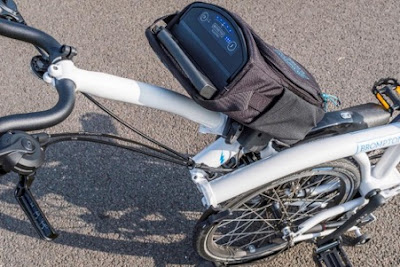 What differentiates the “official” Brompton approach is the attention to detail. There is no clutter around the handlebars and all the wiring is neat. The battery clips on and off with a new connector block system and a well placed release latch. Controls are simple and the application of power seamless. Front forks are subtly modified and strengthened to mount the motor. There is a connector to easily disconnect the power supply to the front wheel to repair a puncture. A torque sensor is fitted which is part of an advanced control system for the application of power.

It should be noted that these changes do mean that the frame is subtly different and the electric system cannot be retrofitted to a normal bike, but this lack of backwards compatibility is worth it for the benefits the bespoke nature of the frame brings.

How does it ride?

This is the big question. Without electrical assistance it rides just like a normal Brompton with a heavy front bag. Same gears, levers, handlebars, seat. You select one of three levels of assistance on the battery pack itself, and the motor then assists your cycling when you pedal. The level of assistance is set while stationary and the rest is left to the bike. 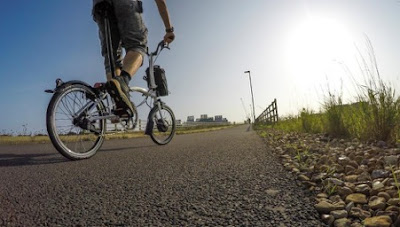 The motor itself has gears and a freewheel inside it. In use, it gives off a high-pitched hum that is actually quite nice as it tells you the motor is working and gives you reassurance. However, the noise is a bit of a giveaway if you are thinking of using your electric Brompton to burn off MAMILs at the traffic lights.

When setting off from stationary, the bike has to detect the effort the rider is applying to start the motor assistance, and this is done with a torque sensor in the bottom bracket. It is a legal requirement that the motor may only assist while you are pedalling, and this is the reason for fitting a torque sensor. But even the best torque sensor needs a bit of movement on the cranks to detect the rider’s effort, which means that when pushing off and starting to ride, the motor assist lags a big. Brompton’s technical staff say they are working out how to minimise this, and it would be great if they could get this even better as, whilst not a problem on the flat, you do notice this lag on hill starts.

Another legal requirement is that e-bike assistance is limited to 25 kph or 15.5mph. When cycling between 15 and 16mph you can hear the motor cut out, and you are left pedalling a conventional bike. This transition is smooth, and being able to hear if the motor is working is really useful as you can judge your speed accordingly. It is especially useful as, unlike on most electric bike control systems, there is no speedo. During my test ride, I was using a Suunto GPS watch to check my speed and the 2-speed version I was using seemed really well matched to cruising at a power assisted 15mph. I suspect that the 6-speed would spend more time going a bit faster unassisted, but remember that you are also putting in more effort to do this.

The test ride was in Cambridge, which is not renowned for its hills, but a short cycle alongside the guided busway brought me to the Addenbrookes guided busway bridge. This is quite steep and some cyclists need to get off and push their bikes over it. On this impromptu test the Electric Brompton flew over it with minimal effort from the rider. Yes, you could hear the motor working harder, but it took it all in its stride. This gave me a lot of confidence that it could manage gradients and deliver on its promise of power assistance.

There is a 300 watt-hour battery, which Brompton say is good for at least 25 miles and up to 50 miles in eco mode. Some other unofficial Brompton conversions use 36V cordless drill batteries, which only give between 6 and 12 miles, which is just not enough real world range. Range anxiety (the fear of running out of juice) is a genuine concern when running any electric vehicle. The battery size that Brompton have used is sensible, allowing you to do a 10-mile each way commute with confidence.

So who is it for?

At first glance, spending over £2500 on an electrically powered folding bike which is effectively limited to 15.5 miles an hour doesn’t seem to make a lot of sense. On the forums there seems to be a kneejerk reaction, with many people saying “how much?” or “what’s the point?”, but this does not consider the bigger picture. Let’s think about commuting for a moment, as this is not the fun sort of cycling - it is getting to work on time, day in and day out, come rain, shine or wind. Generally commuting is tolerable in spring and autumn, but in summer you arrive all sweaty and in winter cold and knackered from the headwind. The biggest revelation when running my electric bike was how it changed my attitude to commuting. No longer is a headwind an issue, no longer do you arrive sweaty at the height of summer, journeys are more consistent and the whole experience pleasant – all year round. 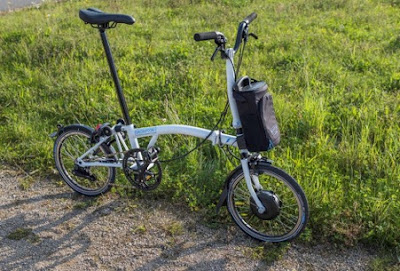 The other insight comes from my daughter, who has started riding my Electric Brompton because it allows her to keep up with her brother on family cycle rides. Where two people want to ride together and one of them is not as much of a “keen” cyclist as the other, then I can see that the combination of one conventional and one electric bike would work well.

If you commute by bike, then an electric bike will transform your journey. Yes, it does cost twice as much as a normal Brompton but it is worth it when you consider what you would save on train / tube / bus fares or even running a car. It is an all-year-round solution.

The Electric Brompton’s mainstream appeal is limited not by the capabilities of the bike, but by the law which imposes a speed limit on assistance. 15.5mph is just not quite fast enough for fun cycling. This is especially true in the UK where cycling is seen more as a sport rather than as a means of transport.

After the release of a number of limited editions featuring only superficial changes such as different colours, with no tangible improvements or refinements, Brompton have now improved the bike and made it relevant. This shows the bike and the brand have a future.
at October 13, 2017