I have been a bit of a fountain pen fan boy for many years and lots of pens have come and gone, while others have remained faithful companions. A new purchase was just too special to ignore!

The pen in question is an 'Onoto Magna Classic' in Tangerine with silver trimmings. The Onoto company goes back over 100 years to 1905 when it was first established. The original Magna was first made in 1937 and sited by many as the best fountain pen ever made. Sadly, things came to an end in 1958 and the Onoto brand was lost (but not forgotten by those in the know) until we zoom forward to 2005 when James Boddy bought the dormant Onto Company. 'The Onoto Pen Company' was formally re-laucnhed at the London Stock Exchange in May of the same year and since then things have gone from strength to strength.

Onoto has been a company I have some fondness for as my late father used one throughout his time in the navy during the last few years of WWII. My dad only had one pen - a Magna - and used it until it was no more. I have coveted one for ages and attending the recent London Pen Show at the start of October and seeing these wonderful pens brought me to the conclusion that I had to have one.

Putting lots of items on Ebay I soon had just about enough to buy one. I toyed between the tortoiseshell and the tangerine but of course for me, it had to tangerine. After a little email correspondence with Emma at Onoto to check specifications and delivery times, an order was placed.

My pen arrived Friday morning and I have to say I was up bright and early to anticipate its arrival, despite the fact I had a day of work. The doorbell rang and my package had arrived.

Instead of ripping the outer box open rapidly with my bare hands - or teeth - I carefully, patiently cut the packing tape to discover that the box had been wrapped in royal blue tissue paper. 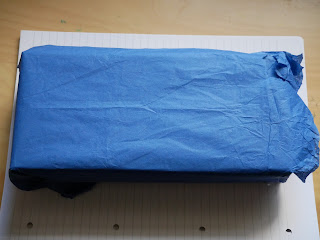 Taking that off revealed the outer, heavy-duty cardboard box emblazoned with Onoto in gold. 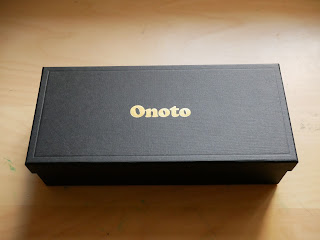 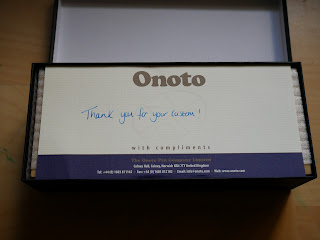 Lifting the lid revealed the actual pen box itself, this wrapped carefully in a thin foam protective sheet. 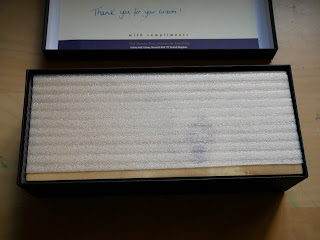 I have owned lots of pens in my time, many with lovely boxes but this one is possibly the best yet. The only ones to touch it are the wooden Platinum boxes used for some of their choice pens. It is gorgeous!

Opening the box I could see the pen. I instantly loved the colour. My pen is apparently edition number 6 of 200.


The tray on which the pen sits on is a soft blue velvet and user this is a whole host of leaflets and information about the pen and the company. The Onoto blotting paper with old advertising posters is a nice touch. 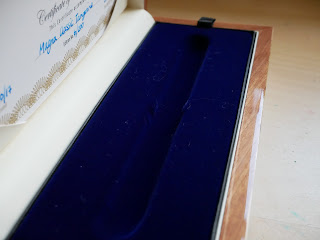 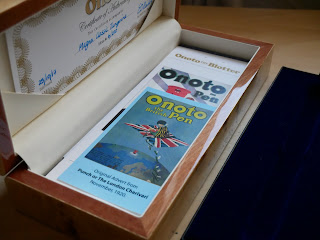 Also inside is a leaflet about the silver hallmarks as the sliver cap bands, clip, logo in the cap and silver barrel button are all sterling silver. 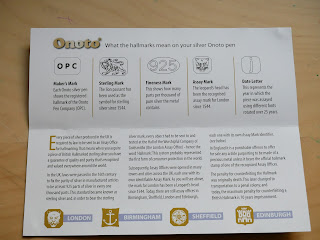 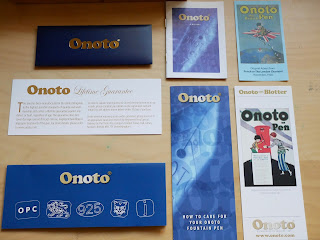 The pen in terms of looks is a stunner. Just looking at it I loved it. The photos really does not do the colour justice. If you like orange pens, you'll love this!


The pen has the engravings 'Onoto THE Pen. Made in England' on the barrel. The material for the pen is a polished acrylic and thicker and to my eyes a higher quality than almost all of the pens I own.  The attention to detail is very high. I could not spot any imperfections anywhere on the pen on in the packaging. All was perfect and I suspect that quality control is given a high priority at Onoto. This extends to little things that I know other pen manufacturers might let slip. For example the engraved 'Onoto THE Pen' logo lines up perfectly in line with the nib when screwing the barrel back in place. Similarly, it also lines up perfectly with the clip when putting the cap on. 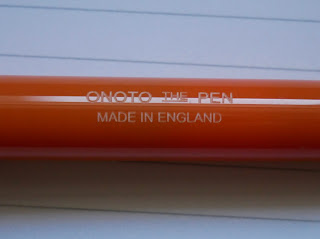 The clip is very firm and bears the Onoto logo. The logo - which looks almost Art Deco -  carved into the silver cap. It is done really well and just screams quality. 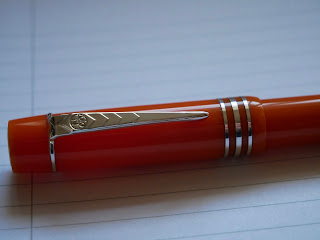 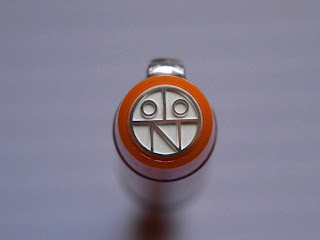 The nib is a number 7 and I opted for the gold-plated steel version in a medium. I did this as I could not afford the extra £120 to upgrade to the 18ct gold nib. Perhaps another time. 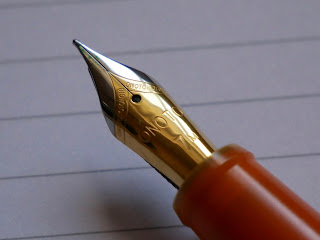 The pen is filled via a standard ink converter so nothing special there but at least it keeps things simply. The writing experience is excellent. The nib is incredibly smooth! While testing it out I had to double check that Onoto had not put in the 18ct nib by mistake. The ink flow is consistent and there were no hard starts or skips. Leaving it uncapped for a few minutes and coming back to use the pen did not halt its generous ink flow. After several hours it wrote first time. It does make one wonder what on earth the 18ct gold nib is like if this gold-plated steel nib is so good?! I fancy all nibs are tested and tuned before going out?

The pen is about the same size as my Sailor 1911 large / Pelikan M800 but if anything more comfortable to hold and use over extended periods of writing. This is perhaps as the section is a little thicker. 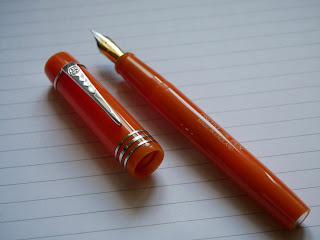 I have quite large hands and although the pen posts well, I had no reason to do so and found it comfortable using uncapped. 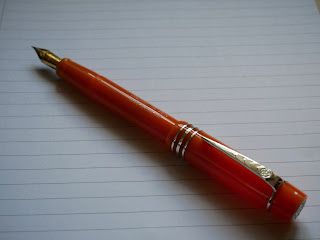 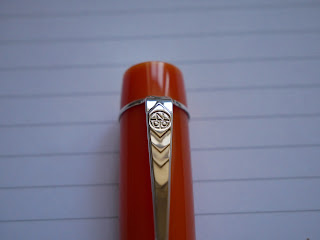 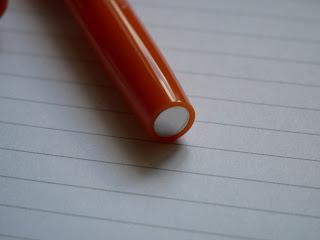 Comparing it to a Lamy AL-Star in - ehem - copper orange there isn't much in it in terms of size. 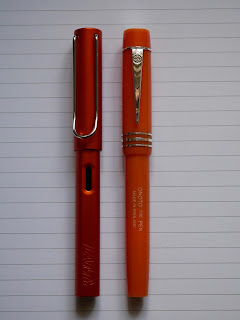 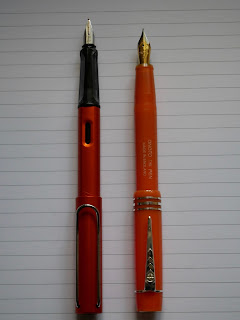 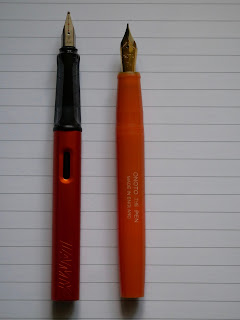 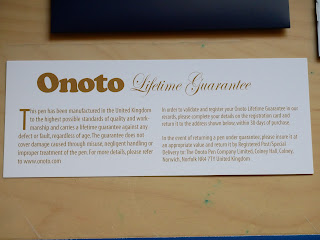 Onoto provide a lifetime guarantee for their pens. I think this is for the original owner only as a small registration card needs to be sent back to Onoto. A lifetime guarantee is very old school and in a world where even fairly expensive items can be disposable, this harks back to a bygone era. I think Onoto can offer this as quite simply they get things right first time and judging by the pen I bought, nothing goes out of the door unless it is absolutely perfect. It was an expensive pen - for me at least - but for me definitely worth the price tag. 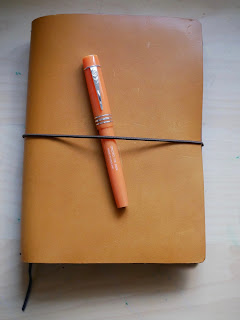 This pen is a keeper. That isn't me just having a new pen that is flavour of the month until something better comes along. This is going to become a permanent part of my collection; that very special bunch of pens that are rarely left without ink and used frequently.