A couple of weeks ago - 6th October - I embarked upon the last of the night rides to the coast for this year. The very thought of this almost brought a tear to my eye as it would mean a wait of perhaps five long months before we would be able to do it all again.

The first of these rides was to Southend - I think - and I completed that on a Brompton. I had decided ages ago that it would only be fitting for me to complete the last of these rides on a Brompton. Dr John had I think deliberated on whether to take one of his road bikes but me talking of small wheels made him pause for thought and he too brought a Brompton for this ride. 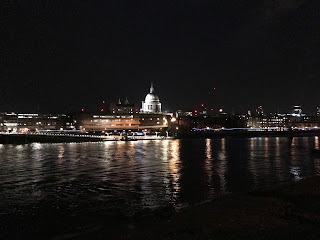 Regular readers will know that I despise public transport when it is busy. With almost aversion-type therapy I have been trying to use public transport more and more, especially when travelling to and from these sorts of rides. Sadly, my worst fears were realised. The tube carriage I was in was soon filled with middle aged men having running battles with each other in a alcohol fuelled scene. It seemed that the cause of all this anger was a lingering look towards one of their partners. I tried not to give too many lingering looks as I knew that a look would turn into a full on stare to see if they all fixed the description of the missing link? Thankfully the looks I were giving out - knock into me or more importantly my Brompton and you'll regret it - were enough for me not to be bothered, unlike some other poor unfortunate members of the carriage. 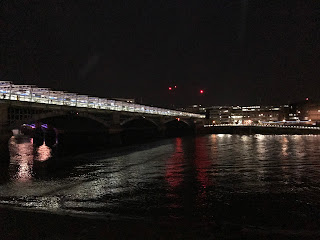 With the Jeremy Kyle tube journey over I found sanctuary in London at night. Crossing the Millennium foot bridge I made my way to the agreed meeting point near the Royal Festival Hall. There were already quite a few participants there when I arrived and one gentleman - who asked if I were Mr Orange of that Orange Brompton blog - said that he had signed up for this ride as a direct result of reading my past ramblings. 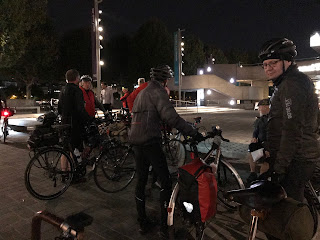 Soon thereafter Dr John arrived on his Brompton and we were to be the only riders on small wheels. Sam of 'Skye Caps' also joined the ride and before long we were listening to Adrian, our ride leader go through the safety talk. With this done we all got ready for the big off which was to come at midnight.

Normally I press the start button on my Garmin 820 but I have been testing out two offerings by Wahoo - the Bolt and the slightly larger Elemnt. I will almost certainly be sticking with the Bolt but I have to say both are excellent and as far as ease of use and navigating, totally kick the stuffing out of the Garmin. Navigation has always been an issue for me but using these devices from Wahoo over the past few weeks has allowed me to navigate with more confidence. I will write a blog post about them at some point. So I pressed the start button on my Bolt and we were off into the night for another adventure. 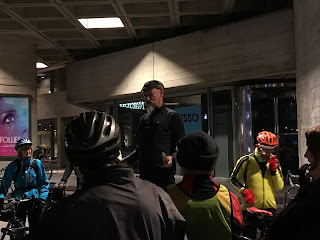 Our first stop was at the familiar Clapham Common where we regrouped for the tail to catch up. We were illuminated somewhat by the tail end of a Harvest Moon. 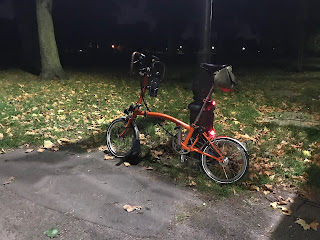 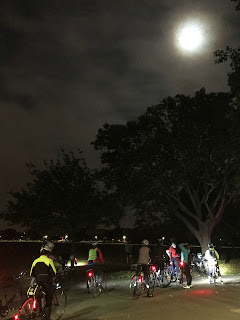 Progress was good and the ride felt purposeful and brisk, with few mechanical issues or punctures to slow proceedings down. Dr John was as always excellent company and yet again I have my Brompton to thank for meeting him. It is lovely that simple and lasting friendship have been established thanks to a small wheeled folding bicycle. 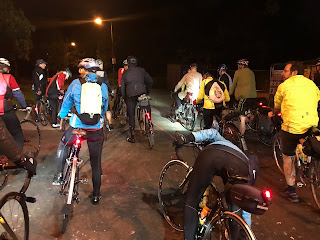 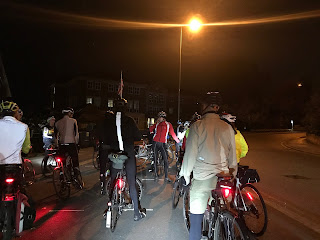 The weather was pretty good all night and the very faint drops of rain didn't get started. It was quite mild too which all made for pretty good riding conditions. 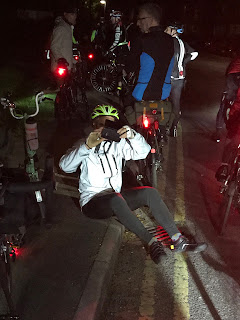 At about 30 miles or so we reached the halfway stop that was Gatwick Airport. Those on big wheels left their bicycles outside - watched selflessly by a team of fellow riders - which allowed them to head inside to get some food and refreshment. Dr John and I simply folded our bikes and headed in.

After some deliberation we opted for and M & S food outlet where Christmas had already made an appearance! After being suitably fed and watered we all got ready to go for the second half of the ride. 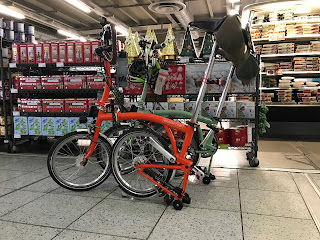 Starting off on the second half can be a time where one really feels the cold. I felt fine and didn't see the need to layer up. After a few miles I was warmed up. 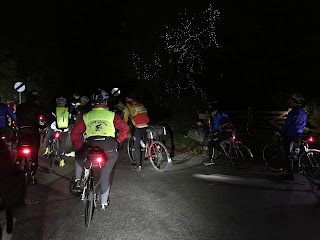 The ride progressed really well and Dr John and I stayed with the front pack for almost all of the ride. Not too far from Devils Dyke, Adrian offered an alternative route - slightly flatter - for those not wishing to ascend a hill. Dr John and I opted for the hill. 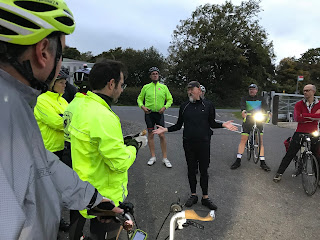 On a previous ride a few year ago that was Brompton exclusive our route to Brighton took us up Devils Dyke. It was demanding but for me easier than Ditching Beacon. Dr John was off ahead of me but after about two miles of climbing I slowed down to see others at the top. 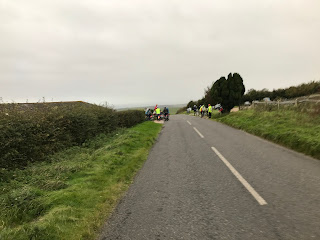 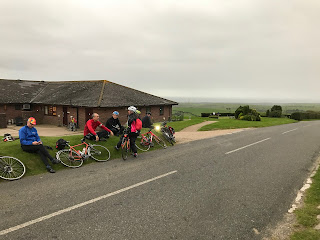 While we waited for others to catch up lots of photographs were taken and through the early morning haze the sea could just about e made up in the distance. 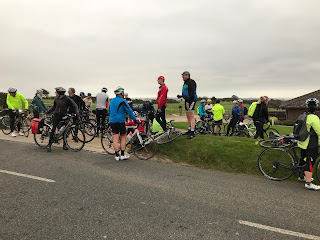 It may seem like madness to ride all through the night to the seaside however once you have it is addictive. It is has a draw that is hard to explain but you do find yourself wanting to do it again and again.

When we set off again, much of the remaining miles were flat or downhill. Cycling at speed a gentleman on a road bike behind me shouted out that he never thought he'd see the day when he would be drafting behind a Brompton. I almost felt like shouting back that if he thought I was fast, he should meet some of my friends! 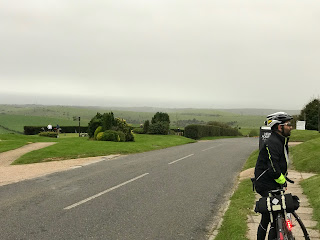 The breakfast stop was not too far from the station but as the journey back to Victoria was double the time it normally takes due to I think engineering works, Dr John and I decided to head straight for the station and the first train back to the big smoke.  Our journey went quickly and at Clapham Junction we said our goodbyes. 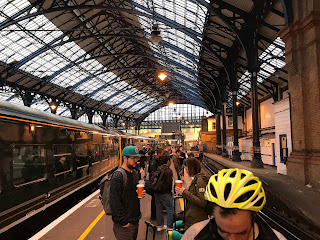 I was glad that I took the Brompton with me. I enjoyed using it and have to report that I didn't really miss my Condor road bike too much. I suspect that when the new season of these rides start again in 2018 I will probably use the Orange one a great deal more.

Many thanks to Adrian for being a good ride leader and to his team of TECs. Also many thanks to Dr John for his excellent company throughout the ride and the journey home. 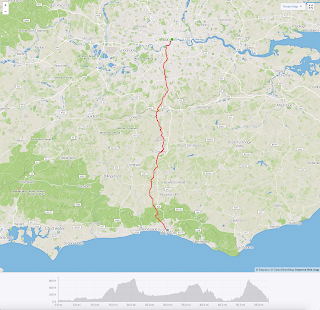