Overnight to Whitstable with a hill at the end!

Lots of people who take up cycling say that it is addictive. This could be magnified several times over if one considers your cycle ride with be through  the night and end up by the seaside. There is something about it that those in the know fully appreciate but 'muggles' just cannot quite understand.

I started with this as my conversation with a middle-aged couple, worse for wear on the tube brought this to mind. When they asked where I was going and I told them that I was starting at midnight to cycle through the night to arrive at Whitstable about 65 miles away sometime the next morning with about 70 or 80 fellow cyclists, I may have well said that I was going to the Thames Estuary to club to death any baby seals that strayed onto the foreshore. To them the notion that anyone would do this rendered that person crazy and better off doing something else. 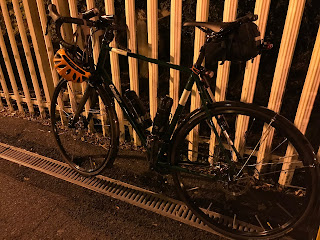 Thankfully my journey on public transport was quick and I could get out into the fresh air and the liberation that is cycling. I arrived at the Millennium Bridge which was totally packed with people walking across it. 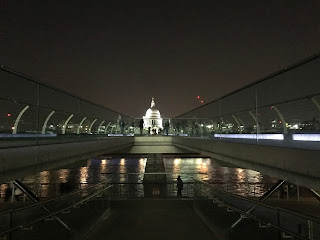 Arriving at the meeting point on the South Bank I saw Dr John, Jenny and Ian on their Brompton Bicycles, Charlie and Graham who like a few of the others in attendance were fresh from their London, Edinburgh, London exploits. Bob was there too in his official capacity as Tail End Charlie and Olaf who would be having his last ride (but hopefully not his last) as he was moving soon back to Germany. Sadly, Geoff, David, Anne and Mark were unable to attend. 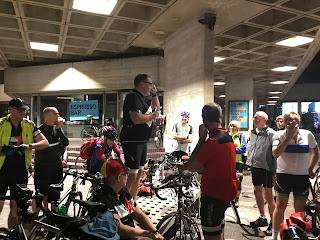 Our ride leader was Ross who welcomed us and over 30 first timers. With the safety briefing completed we checked our bikes just after midnight the sound of GPS cycle computers bleeping into action and cleats clicking into pedals meant we were well and truly off. 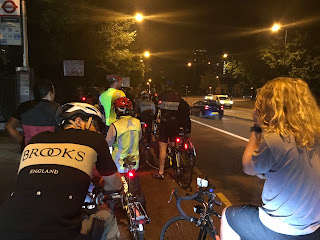 Our ride leader Ross set a good purposeful pace and before long we arrived at the Greenwich. After a few pictures of the Cutty Sark, nicely illuminated perhaps as they knew we were passing by, we were off. 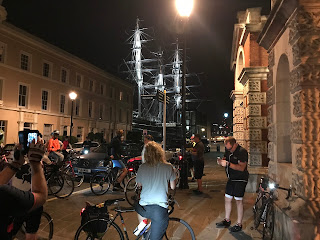 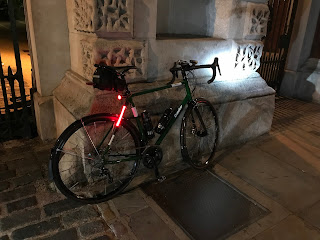 It was a warm night and I felt very comfortable in my short sleeves. When we cycled further east adjacent to the river Thames, the temperature dropped but nothing that was a problem. 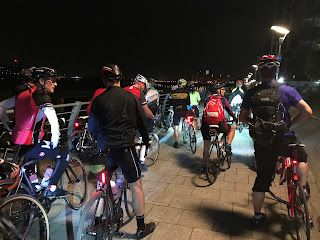 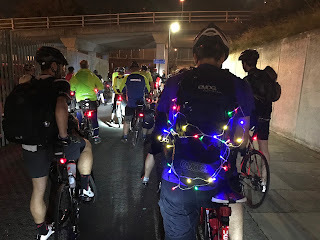 At one of our stops I saw the piece of artwork and had to prop my bike up against it for a photo. If you look carefully you will see two gentleman who were obviously caught short. I am pretty certain it doesn't distract too much from this being a lovely photo of my Condor road bike! 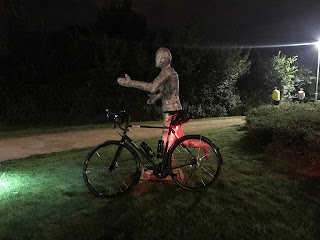 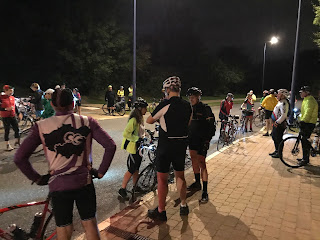 Arriving at Gravesend we stopped at a pub formally named 'The Call Boy.' I recall on one of my first rides to Whitstable it being a gay club and a gentleman talking to Simon - our then ride leader - about what we were all doing. 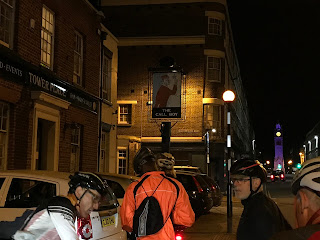 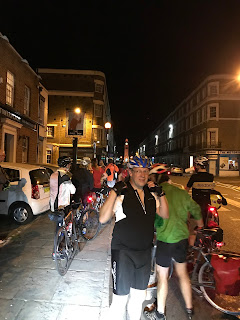 As always there were occasions where the front of the group stopped for the tail to catch up. It was a fairly smooth ride with little in the way of mechanicals or punctures. 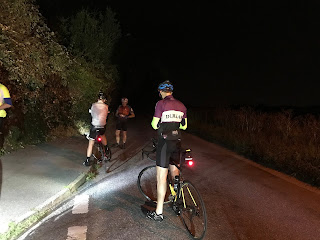 At about 33 miles in we reached our halfway stop at. The Church of the English Martyrs. As we arrived Tim - a ride leader of this very event - greeted us. Inside he and his wife had organised with the help of some other members of the church a wondrous feast of comestibles. For the bargain price of £5 one could get a couple of rolls and a slices of homemade cake, washed down by tea/coffee. The cakes in particular were excellent. 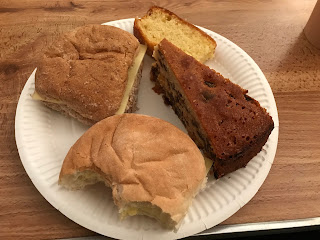 While we were eating all these goodies, Martin gave a lovely speech about Olaf and proceeded to give him medals for various things he had done over the years as a member of this wonderful club. When Simon - the founder of this club - decided that he wanted to pass the baton on, Olaf along with some other longstanding members stepped in an began organising rides. To him and the others I have to say a huge thank you as without them this wonderful, if not crazy notion of riding to the coast from London might have become but a memory. 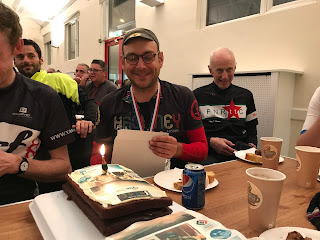 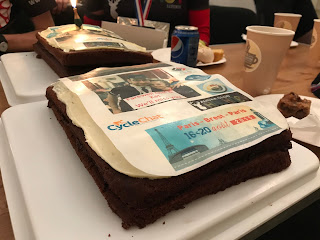 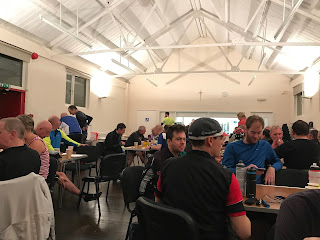 Often when we get going from the halfway point I instantly feel the cold but on this occasion all I needed were some arm warmers, which were discarded not that long after. With a goodby to Tim and his wife, feeling fuelled up we cycled off for the second half of the ride. 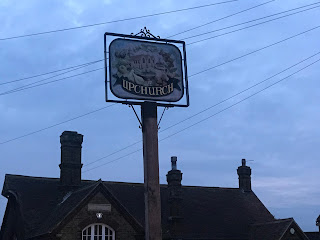 Dawn is a beautiful time of the day to experience via cycling. The colours of the sky is stunning and this combined with the sound of birds singing makes it all worthwhile. 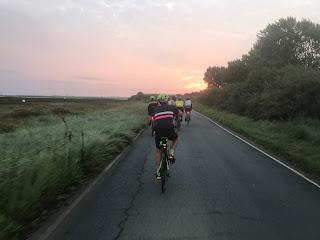 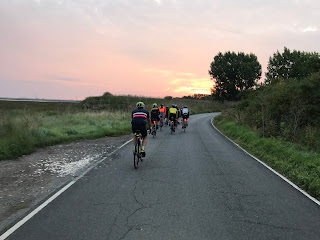 Bob and I chewed the fat for a while. He like Olaf, Graham and a few other riders had not long recovered from their epic London, Edinburgh, London adventure. He reminded me of the time on this very route a few years ago where he was singing the praises of road bikes. At the time I tutted and said never! How things have changed. I still love my Brompton but I have been seduced to the dark side that is the road bike. 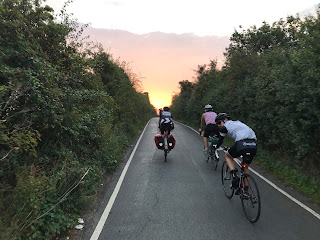 We stopped to regroup with a view across to the Sheppey Crossing - a bridge that links the Isle of Sheppey with the mainland of Kent. 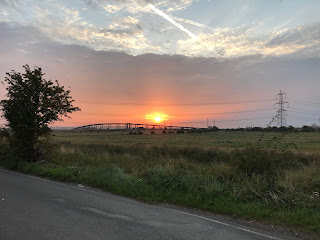 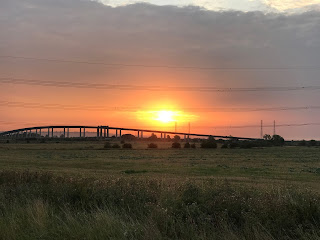 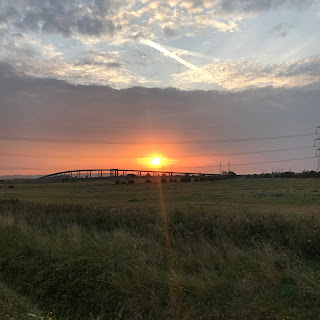 At Faversham we stopped and regrouped before those who wanted to could cycle at a faster pace towards the breakfast stop. As I needed to get back to the big smoke as soon as possible for something planned later that day, I wanted to do just this. I loaded  pre-planned route into my Wahoo Elemnt that would take me on a slightly different route to Whitstable station. The route I planned would take in Fox's Cross Hill that would lead onto Wraik Hill. In addition it would take me to the correct side of the nation for the London platform without crossing the footbridge. 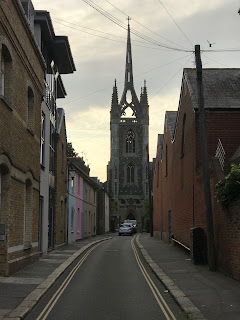 Wraik Hill was tough at this point in the ride but I enjoyed getting to the top...eventually! It just seemed to last for ages. I found following the route on the Elemnt simplicity itself and I am finding it a great deal easier than my unsatisfactory attempts with the Garmin 820.

Arriving at Whitstable station in good time I pressed stop on my Garmin 820 - which has been relegated to recording the ride data of my adventures and posting on Garmin Connect - a clocked up a tidy 65.9 miles. A few fellow cyclists from the ride started to filter in and my train to St Pancras was on time. 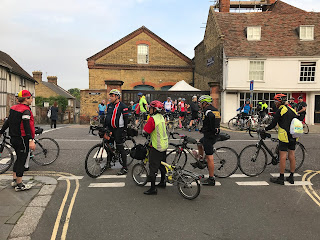 Yet again this was another highly enjoyable ride that I always enjoy. Many thanks to Dr John and my fellow riders for their company, Ross for being an excellent leader, Tim and his wife at the halfway stop and all the people acting as Tail End Charlie. With any luck I will be able to do this all again the same time next week but this time to Felpham.