Last Wednesday I joined Jenny, Dr John and later on Simon for an early morning sojourn from London to Cambridge. This was to be a recee for the proper ride that it set to take place this Sunday. Jenny kindly invited me to join her for the test run.

The start was certainly bright and early. I normally have little problems getting up at an ungodly hour but when my iPhone alarm sounded at 04:15 in the a.m. pressing snooze was probably not a good idea. When it sounded off again to tell me to get up I found it very hard.

There was no public transport that would get me the start at a suitable time so I had to drive part the way and then cycle about 6 miles. I enjoyed this as the streets were empty and progress was good, apart from some traffic signals that seemed to take ages.

Making it to the swinging birdcage outside King's Cross station I saw that Jenny and Dr John were already there. We were soon off in the general direction of Cambridge but would be meeting Simon at Broxbourne.

Jenny and Simon had kindly provided the GPX of the route and felt it a good opportunity to test out the 'Wahoo Elemnt' which I have been testing out for a couple of weeks. I will write another blog post about it but I can say that I can actually use it successfully to navigate somewhere without wanting to tear my hair out as often is the case with the Garmin 820. It is quite brilliant and I could have quite happily navigated us to Cambridge using it.

At Finsbury Park we stopped at the 'golden arches' so that Dr John cold powder his nose. I took a photo of the Arsenal shop. 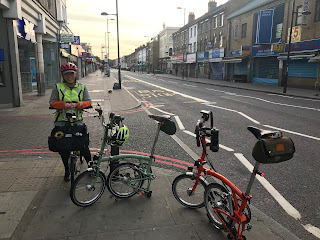 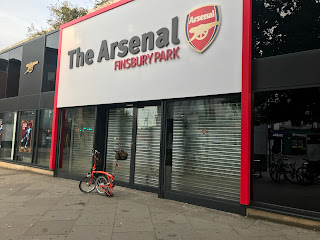 The early start was a very good idea as the traffic was very light and we made good progress.  Reaching Enfield, Jenny alerted us to, Forty Hall a Grade I listed manor house that is currently a museum. Of course nothing was open but it was a lovely building set in picturesque grounds. 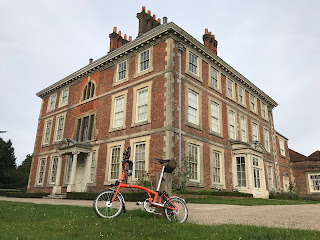 Before long we arrived at Broxbourne as large stone cubes spelt out the words...Broxbourne. I have to report that they must have been at the very start of the boundary of Broxbourne as we pedalled quite a bit before meeting up with Simon...in Broxbourne. 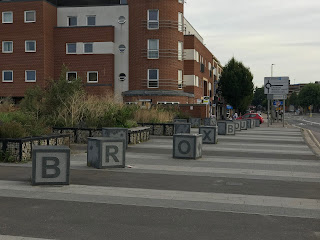 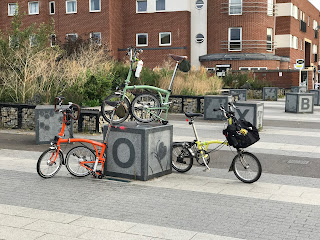 As we entered the town centre of Waltham where market traders were busy setting up I spied what I thought was one of the Eleanor Crosses. There is one very similar outside Charring Cross station so wanting to see if it was we searched for an information plaque. Sure enough it was. 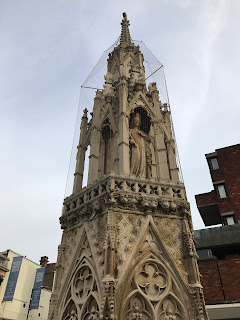 The Elenor Crosses were a collection of twelve monuments that mark the nightly resting place of her body along the route from Lincoln to London. They were build between 1291 and 1294. 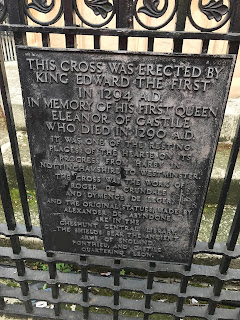 By this point the traffic started to ease off even more and the urban was giving way to the British countryside. We met Simon at the railway station and then sought out a suitable location where we could have a tea or coffee. 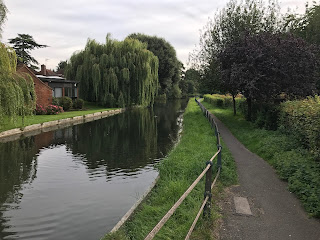 We found an establishment not too far from the station where a bacon roll and latte was consumed with a certain amount of enthusiasm. With that done we set off again for Cambridge. 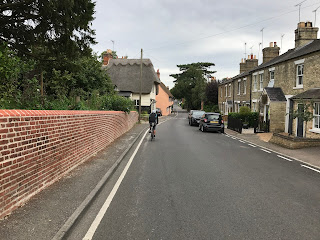 We passed lots of little villages many of which had some pretty old buildings. There were also plenty of thatched cottages and it was generally picture postcard stuff. 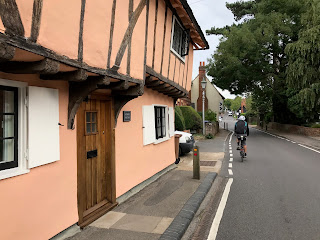 On a stretch of quiet road Simon had a spectacular front wheel blowout with a gaping tear on the wall of his Kojak tyre. I gave him a tyre boot which did the trick and Dr John provided a CO2 cartridge. I have always carried a tyre boot since David P had something similar happen to him on a overnight ride to Brighton. Until that time I had np clue as to what a tyre boot was. 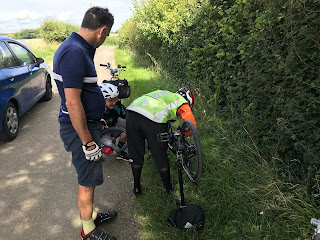 With the wheel back on we resumed out journey, enjoying some beautiful countryside. As I reported my navigation was going well thanks to the fact that the Wahoo Elemnt just seemed to do what it was meant to do without any fuss and just worked. I therefore made up my mind that I would do the route again in the near future - also getting up at the same ungodly hour! 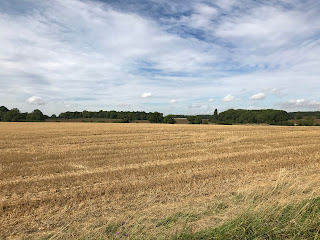 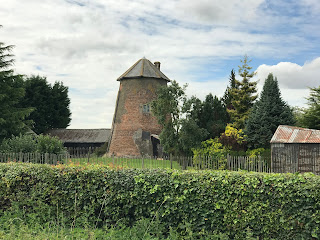 The miles ticked by, mainly as the company was so good. London to Cambridge in the past has not been something I have overly warmed to. This has been down to the route which was a great deal more demanding for some reason. Simon's route was a beauty and those participating in the official ride on Sunday were certainly in for a treat.

As we reached the cycle path with its coloured strips, memories of past rides that were not as enjoyable were all but erased by good ones from this trip took their place. 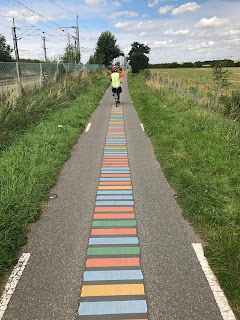 Simon's route had another treat as we cycled around Cambridge viewing its many architectural gems. Tourist were out in force as were hundreds of cyclists. 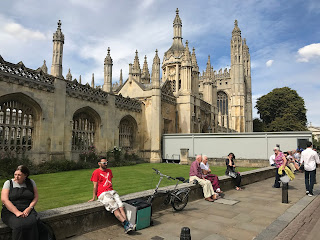 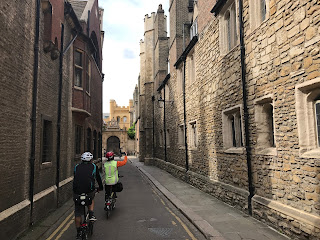 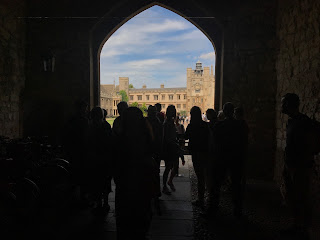 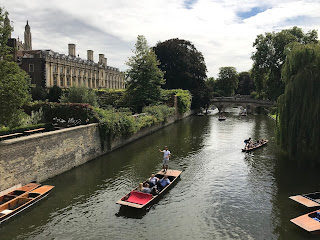 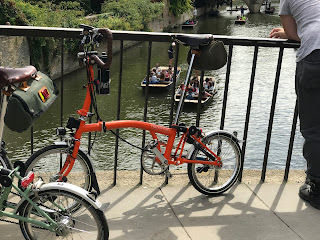 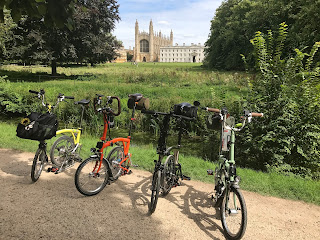 We said our goodbyes to Simon who actually had to return to work later that afternoon, while Jenny, Dr John and I looked for a place to eat. We soon found a pub where we were fed and watered. Looking at train times back to London I discovered that if we managed to get the next train, it would get into London much faster than the later trains. The only snag was that it left in less than 20 minutes.

With a route plotted into the Elemnt, almost instantaneously it had plotted the route. Leading the way I was determined to get that train. If I had of been using the Garmin 820 - which I had brought with me to record the ride - we would have missed the train. We got to Cambridge station, bought tickets and boarded our train.

At King's Cross Dr John and I said goodbye to Jenny and we pressed on toward Euston - again navigated on much quieter roads by the Elemnt.

This really was a lovely ride with some great company. As I have already written I very much want to do the ride again but next time on big wheels. 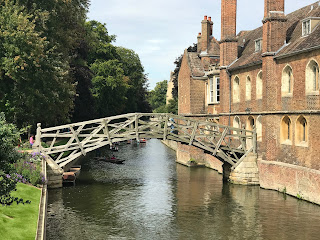 Many thanks to Jenny, Simon and Dr John for making it such an enjoyable day out.