With so many of use unlucky with the Brompton World Championship ballot this year, one of the only tastes of racing was the Nocturne. With a new location, circuit and sponsor the opportunity to participate in a very pure and somewhat raw event was too good an opportunity to miss.

Sadly our numbers were diminished this year. There was no Andrew, David, Anne, Dr John or the lovely and ever smiling Chris (although she was smiling as a spectator). It was just Mark (King of the Hill), Guy and myself.

I had arranged to meet Mark outside St Paul's Cathedral so that we could chew the fat, take on some food and water before heading over for registration.

Getting to St Paul's was interesting wearing orange business attire I can tell you! A thick skin was needed. As I glided by some looked bemused. Some smiled. Many pointed. Some totally ignored what I was wearing and carried on as if I were wearing nothing out of the ordinary. At traffic lights I was besieged by all manner of people - mainly young ladies who wanted a selfie with this strange chap in orange.


By the time we registered it was gearing up and the race briefing was moments away. There were other changes to the familiar format. This time there would be no heats but one pre-qualifying race that would see all participants racing for 40 places. Crikey!! 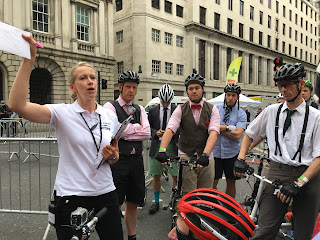 Some familiar faces came into view. Past participants gave knowing smiles and handshakes as we all waited for the off. 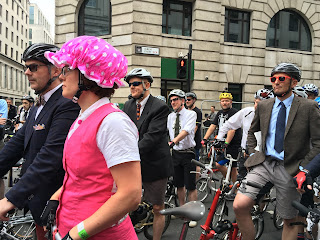 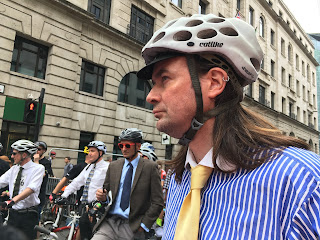 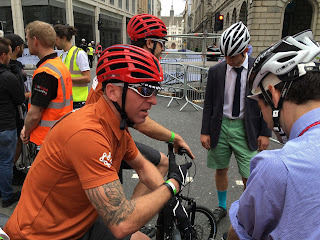 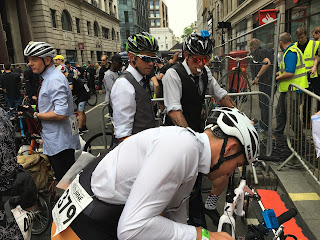 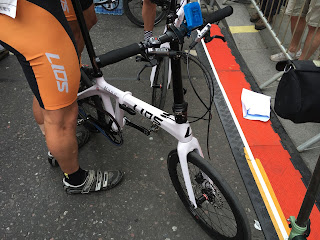 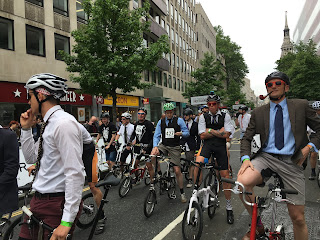 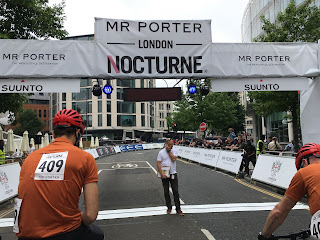 Bikes were placed 30 metres up the course and we retreated back, vying for positions. I have to confess I was nervous and my heart was beating fast and I hadn't even started pedalling yet! 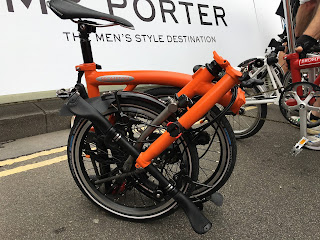 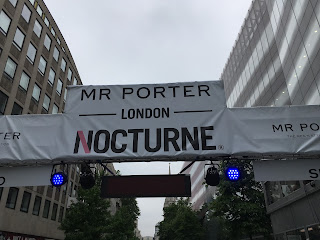 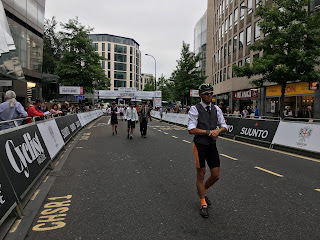 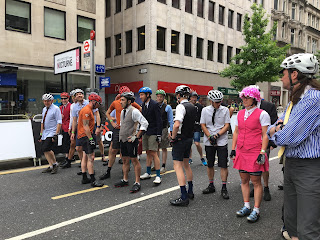 Wearing SPD shoes I sort of minced for want of a better word to my bike. I actually got a pretty good start and was off quite quickly. I have to say that I found the going hard. Mark soon passed me and my attempts to keep up were in vain. This was not to be my year as far as the final went but I loved the buzz from the crowd and the heat of serious competition. By the time I was on my final lap I felt I was almost slowing down if anything. The start finish line loomed and crossing it I continued for another lap to wind down.

As for the course, it was flatter than Smithfield but there were 90 degree turns, narrow sections and lots of drain covers - I went over every one of those and made a mental note to learn how to take a racing line.

What a circuit and what a race! Returning to the pits, many awaited the list that would say if you were in or out. I already knew that I had not done enough and when the confirmation came I was 2/3 places outside the cut. Poor Mark, like last year wasn't even on the list but placed rather well and went to see the stewards about it. His place in the final was secured as was Guy's. Well done to them.

With plans for tomorrow I decided to head for home rather than wait quite a while for the final. I really enjoyed the event and hope to return next year. My fitness let me down me thinks and I know that I have to do something about this.

Cycling there and back as well as participating in the one heat, I do feel as thought my mojo for all things cycling is starting to return. This is of course a good thing as I have just spent a tidy sum on a new Condor road bike. I have more than a few plans for my new addition as well as of course taking my Brompton bikes out for more adventures.

As I type this the final is over and both Mark and Guy placed very favourably. Very well done to them!

Email ThisBlogThis!Share to TwitterShare to FacebookShare to Pinterest
Labels: Nocturne