With the high of the Nocturne yesterday still coursing through my veins I obviously could not get enough of it so I decided to attend the Eastbourne Cycling Festival Folding Bike Race.

With Mrs Orange and the Orangettes packed in the car we headed off first for a good breakfast before driving down to Eastbourne. We made very good time and had a few hours to spare in which we had a good look around and bought some rather good ice-cream from a huge establishment opposite the Winter Gardens.

When the time came for me to return to the car to change into my racing outfit I was quite sensibly abandoned to my fate.

Yesterday I was on the receiving end of some strange looks. I have to report that I do not think Eastbourne was ready for me in all my racing glory! 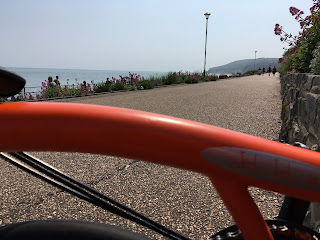 The folding bike race was at 15:30 at the end of the two day festival. It looked pretty good to me and the race lineup for the two days was impressive.

As I entered the paddock I saw the familiar faces of Tim, Roger and Chun-Han. It was lovely to see them and I was glad that I would be with at least a few familiar races out on the track. 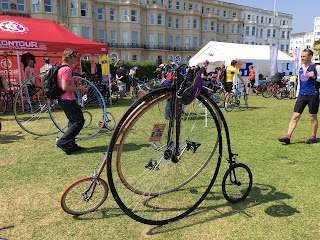 The previous race still going at 15:30 and we had to wait a little to get on to the track - quite understandable. We received our race briefing and told we would have a Le Mans start but would have to leave our ties on our bikes and when we were given the go, we would have to run to the bike, put the tie on, unfold and then go. Interesting.

I opted for something Terry Thomas would have been proud of and left a loosened tie hanging limply on my bike. This meant that I would only have to put it over my head and tighten. 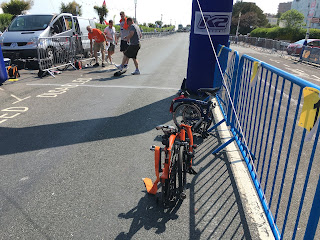 With very little fun we walked back to the start line, got ready and on a whistle we were off.

There were about 15 riders but one of them was Mark Emsley, the current Brompton World Champion and former Nocturne winner. I actually managed to get a much better start than him but of course I was very soon overtaken. 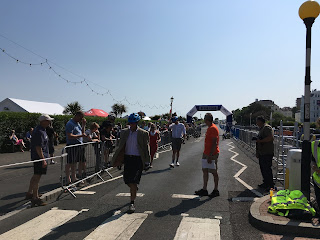 The course was interesting and there were a few very tight turns and the one near the the beginning of the home straight proved near impossible for me to negotiate. We went round for 10 laps and in the heat to was hard but fun and enjoyable work.

With lots of support from the crowd the atmosphere was really good and upon seeing the checkered flag the race was over.

Mark Emsley won but Roger came second which was brilliant. Chun-Han also came second in the ladies race so they had a wonderful day.

With the race over I said my goodbyes and headed back to the car to change and find out where Mrs Orange and the Orangettes were.

This was a great little event and I hope that the organisers consider putting it on again for next year. I am pretty sure that I could rope in a considerable number if they did.

Again my enthusiasm for all things cycling seems to be coming back but I do look forward to the arrival of my new bicycle which for once is a change from anything Brompton related.