This morning I was in central London and as I had my Brompton with me decided to go for a ride along the Thames to blow the cobwebs out.

I decided not to take any of my cameras out with me apart from my iPhone SE - which I am loving!! (If you read further you will appreciated that this was a good idea). I started at Barbican and made the decision that I would take only a few pictures if any.

I must have got going at about 09:30 and being a Bank Holiday here in the UK things were a great deal quieter than normal. Even though it was cloudy and a little windy at times, conditions were very pleasant for cycling.

If you have a look at the map and ride data below, you will see that I was on my tried and tested favourite. I needed to be back at my start point later on so it seemed like the best option.

The first of the strange sights this morning was as I started to cycle around the Shadwell Basin. In the distance I saw a jogger who appeared to be wearing a skin tight body suit of some type. Now this lady must have been in her late 30's, a little overweight and was wearing in addition to the skin tight body suit a pair of bright pink trainers and matching baseball hat. As I soon got closer nothing in life prepared me for what I was about so see!

It soon became obvious that the skin light body suit was in fact actual skin. The lady in question was wearing a thong and a sports bra that did nothing to assist the poor lady...let's just leave it at that. How I managed to not shut out, 'my eyes' I do not know?

The next strange sight was a much more pleasant one. In between Greenwich and the O2 I saw a small buggy with an antenna coming towards me. I fancied that it was a child in a car at first but as it came closer, I was at a loss? There was a nice lady walking behind it so I asked what it was. In a heavy Russian accent and with a smile playing across her face she informed me that it was a delivery robot. When I asked her how many others had asked her the same question this morning, she laughed.

I reached the Thames Barrier and its View Cafe in good time. Not thinking that it wild be open today I was about to head back the other way when I saw a couple walkers heading in.

As I had only had a bowl of cornflakes for breakfast I decided to partake in a little light refreshment. Suitably refreshed I headed back. 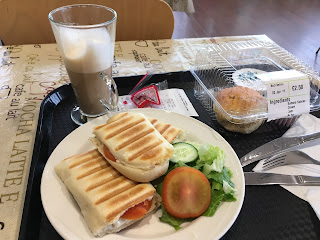 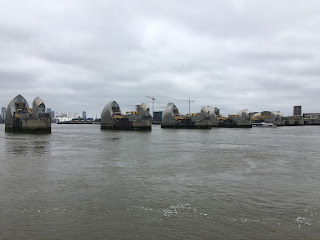 One thing I noticed was that one of the barriers was up. This has been a question to one of the cafe staff by another customer. They were informed that it was just maintenance checks. 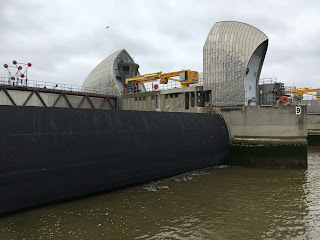 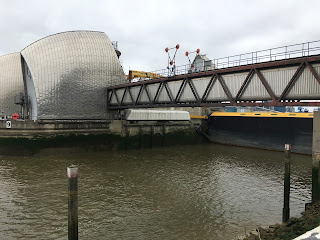 My journey back was as quick as I dared and thankfully I did not see the jogger again!