It would be true to say I had been looking forward to the Friday night ride to the coast - in this case Shoreham-by-sea - all week. With my Titanium Orange Brompton ready and derailer finally repaired I was ready days in advance.

The meeting point was the familiar Hyde Park Corner. I had set myself the goal of using public transport to get myself there and back once the ride was over. Regular readers will know I have a particular horror for tube trains and sadly my worst fears were well and truly realised.

I am usually waiting at Hyde Park Corner at least 45 minutes earlier than needed. On this occasion I decided to just things a little finer so I would arrive at about 10 minutes before the roll call. My journey was delayed somewhat as a fight had broken on another carriage. Police were called and our journey was delayed as they attended to the scene. Texting Geoff that I may be delayed we were eventually allowed on our way.

I arrived with moments to spare, got myself signed in and was able to join in with the pre-ride safety briefing. Geoff, Mark, Dr John and Zoom Zoom were all there and with a slight drizzle we awaited midnight which would mean the big off. 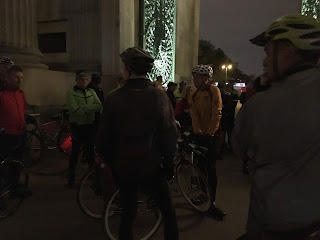 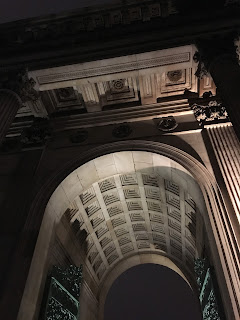 Bang on time we headed out to the side of Hyde Park Corner, poised for the lights to turn green. Once they did, that wondrous sound of shoes clicking in to pedals filled the air and we were off into the night. 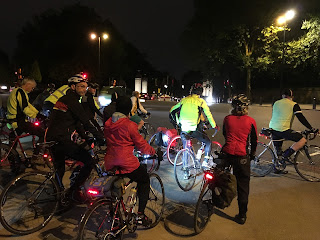 The pace was purposeful and I was glad for packing as light as I dared. I am getting better at this but still no match for some of the hardened Friday Night riders who are expert in taking only that which is needed.


We regrouped every so often but for the entire ride we certainly weren't kept waiting long. The Friday night ride had even gone Star Wars with the added technology of two way radios signalling the all important, 'all up' informing that the tail had caught up. 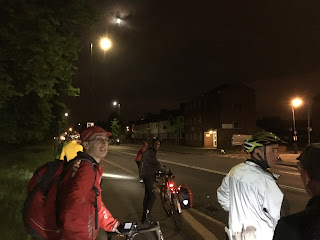 The route was very good. It seemed to follow the one to Brighton. At the base of a little hill we regrouped before making our ascent. I decided to wear my Proviz 360+ jacket which had proved itself to be waterproof but also breathable. I wore it for the entire ride and didn't really feel too hot in it.

Occasionally the driver of a car passing our way would shout out a derogatory comment but nothing they uttered could dampen the positive vibe of this ride.

After some steep little inclines we had the descent of Reigate Hill. With it being mildly moist and with cars around, the only word I can use to describe my descent would be, mince. Dr John was happy to join me in my slow and deliberate pace down but sensibly abandoned me towards the bottom.

My Exposure Toro continued to impress and illuminated every pothole several metres ahead of me. As you know I am a fan of the dynamo system on my P type but this light is incredible. It can pump out a huge lumen count for hours - even on the low settings. 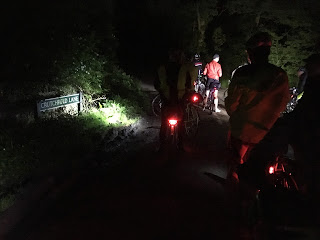 After about 35 miles we reached Faygate and the our halfway stop, 'The Cabin.' This roadside cafe provided us with warmth, sanctuary and refreshment. I opted for a cheese sandwich and a mug of tea. This I consumed with enthusiasm. The sandwich reminded me of something you might have got for tuck, if you were lucky and I vowed to have the same later on when I got home. 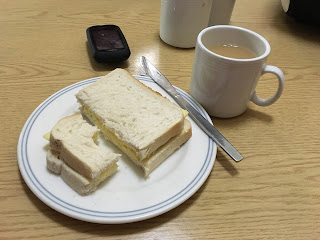 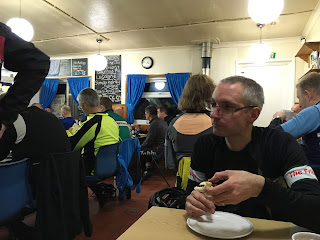 With comestibles out of the way we ventured outside to find that dawn had arrived. As always I felt cold and was glad that we didn't hang around and just got going. 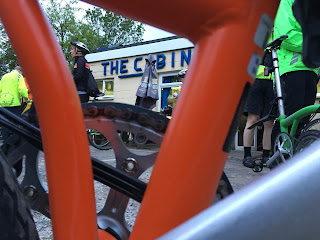 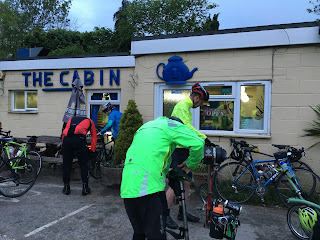 Almost immediately we had to ascend another hill and within the space of a couple of minutes I was warmed up and felt the cold no more. 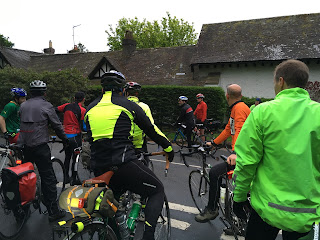 Zoom Zoom was not on his Brompton for this ride but had decided to bring his new Cannonade Synapse. It was a truly beautiful machine and again confirmed for many of us that we too would make the jump to a big wheeled road bike at some point in the future.  Quite rightly he was very pleased with it.

As you may know, for me that is going to be a Condor. There are some sentimental reasons behind this decision but the jump to a road bike had been on my mind for some time. I do love my Brompton bicycles but definitely have got to the point that I'd like a little more. 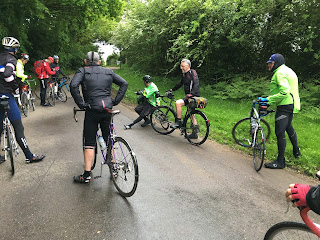 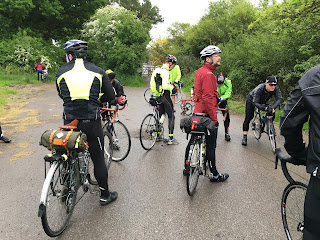 As we cycled along I could hear the dawn chorus in full flight. The usual suspects Robins, Blackbirds and Wrens were of course there but also that of Chiff Chaff's and Reed Warblers. 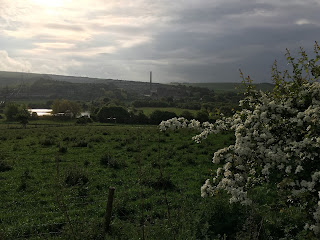 With the back of the ride almost broken we had made excellent time and would arrive at Shoreham-by-sea ahead of schedule. 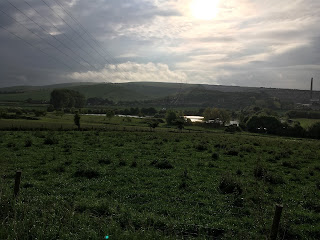 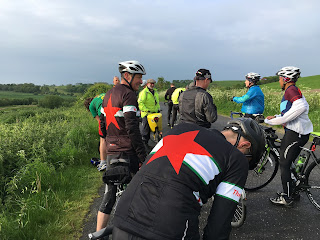 Having been to Shoreham and its Art Deco airport a few times on David's excellent Brighton Undercliff adventures, I started to recognise my surroundings. Knowing that the airport was not far away I accelerated and was soon looking out onto the runway. 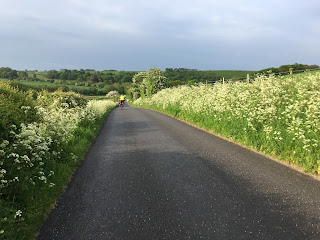 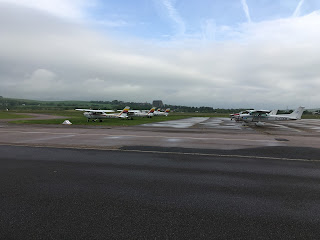 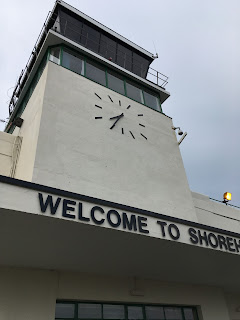 We grabbed a table and before long a waiter came round offering tea/coffee. Not too long after that our buffet breakfast was served and we were treated to some great food in great surroundings. 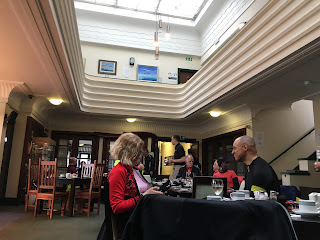 With tea and coffee being brought round several times, we were spoilt and the added bonus of being informed we could go up for seconds was a gleeful moment. So, like Hobbits many of us had a second breakfast. 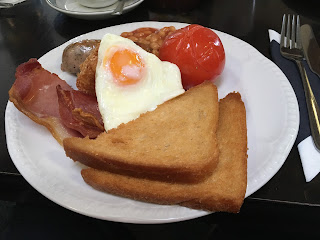 Saying our goodbyes we headed out towards Shoreham-by-sea railway station before taking one last look at the airport and the temptations of some rather lovely road bikes parked up by participants of the rides. 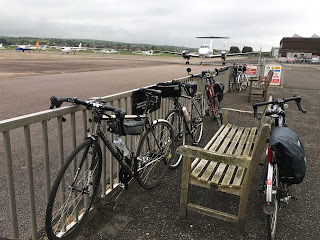 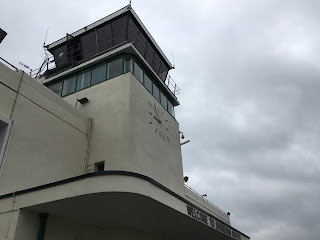 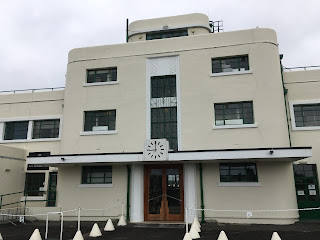 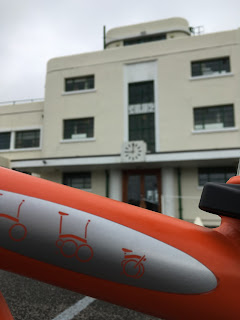 At the station we said goodby to Dr John who was sadly on a later train. Geoff, Mark and I boarded the 09:42 bound for Victoria. 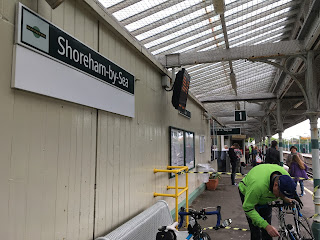 Once on the train as we neared London we saw a few football fans. It soon transpired that today was the FA Cup Final. The last thing I wanted was to be on a tube train with huge numbers of supporters. Thankfully this did not happen. 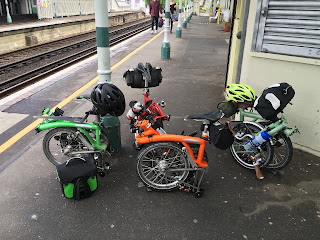 With Mark getting off at East Croydon, Geoff and I got off at Victoria before heading our separate ways where a few hours before it all began - Hyde Park Corner.


This was an excellent ride. The route was good and the breakfast location was inspired. Hope that a London to Shoreham-by-sea features again in the future.

Many thanks to Geoff, Mark, Dr John and Zoom Zoom for the company and banter. Special thanks to Adam our ride leader for organising it all along with Rebecca.

As I have written many times, there is something quite addictive about doing these rides. When you tell people that you have this planned for the weekend, they often look back as if you are mad. That reaction is perhaps understandable, but doesn't detract from the fact that these rides are brilliant. Hopefully, I will be signing up for the next one which may well feature the dreaded Ditchling Beacon!!