In the Jane Austen novel, 'Emma' there is a passage that describes a picnic at Box Hill. This was and is a location offering stunning views. The chance to cycle to this location and back again from Kew Gardens was too good an opportunity to miss. There are however some caveats to this. First we would be arriving at Box Hill in darkness and see none of this famous views and I suspect Jane Austen might have a fit of the vapours at our journey and stop-off location...

The only real cycling I have done in recent weeks has been the Brompton World Championships, so I was keen to get back into the swing of things. Meeting at Kew Gardens were David (our ride leader), his son, and Tom. Setting off at 19:00 we were to meet another two brave souls at Hampton Court Station. Andrew was signed up for this ride but sadly wasn't able to come.

I was going to take my Titanium Orange Brompton as it was a particularly fine evening but as it was a night ride I wanted the joys of a front dynamo hub and its constant illumination, so my trusty P6L came out to play. (Remember this statement for later on). 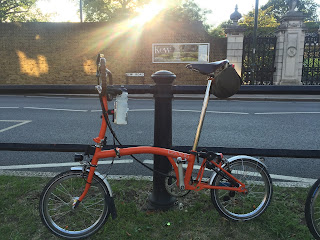 David set a keen pace and before we knew it we were through Bushy Park. This area has been settled for over 4000 years with Bronze Age finds. When Henry VIII took over nearby Hampton Court it was established as a hunting ground.

As we neared Hampton Court Station we saw Tony and Zoom Zoom. Both are perhaps the most stylish of all Brompton riders and it was good to see them both. Soon we were off again into a night that was quite humid and for the most part devoid of any heavy or even light winds.

The ride to Box Hill from Kew is uphill, although it isn't really anything too taxing. Views gradually become more and more obscure as darkness descended.

One part of the ride I do not look forward to is something called the 'Claygate Badlands.' This is a bridal track through a small wood and after the sun has gone down is a chilling location for many reasons!

The track soon becomes mud and one wrong move could see a rider falling from their bicycle. In addition to this is the fact that it is a well used bridal path with the evidence of horses travelling through all over the place! Trying to negotiate this is perilous. At one point stones rise out of the ground at acute angles, thus providing yet another object to avoid. How we all made it out in one piece I do not now!? If a camera had of been trained on my face you would have seen me giving what can only be described as a withering look until I reached the open road.

Our progress towards Box Hill was brisk and I felt my fitness had suffered for not riding as often as I perhaps should. Soon Box Hill came into view and without any fanfare we made our ascent. David, his son, Tom and Tony were up pretty quickly and Zoom Zoom was...well zooming up now that his had replaced his tubeless tyres for Marathons.

We made it and once regrouped we headed for the Smith and Western pub, a wild west themed establishment at Box Hill. I have to confess it is a joy for several reasons. Firstly I cannot abide Jane Austen and I suspect a themed pub would have offend her greatly as it would people who for some reason dress up as characters from her books.

We placed our order and every so often a country and western musical classic could be heard over the singing of 'happy birthday' to various patrons therein. We sat outside, which was the best location as it afforded us the delights of a cool breeze. 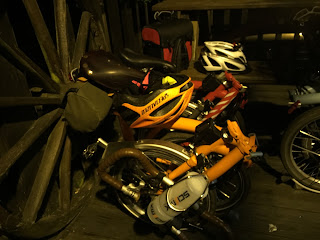 The Smith and Western really is worth a visit and although I have yet to do so, one day I will take Mrs Orange and the Orangettes there. 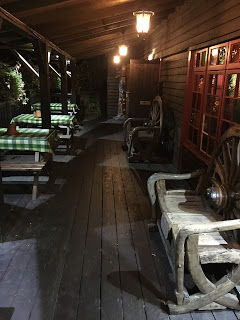 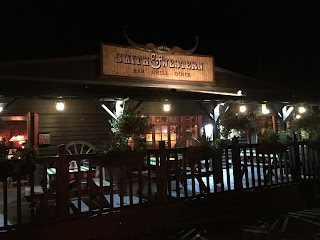 The night was still pretty warm as we left at about 22:30. The go thing is that the remainder of the ride was more or less flat or downhill, with the odd climb here and there.

Sadly after about 15 minutes in the bracket for my front dynamo light snapped...AGAIN!! I don't know what it is about them but this is now the second time for me and David said that he was on his third (the third snapping while participating at the recent Brompton World Championships no less). I did have a spare in my saddlebag but not wanting to delay anyone, a rubber band secured it is place for the remainder of the ride.

Luckily I had my CatEye Volt light with me, so I changed the mode from flash to constant and I was okay. I do have to report that I missed the dynamo light a great deal! It really does illuminate the road in a way a standalone light cannot. 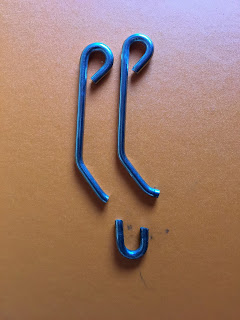 Of course when we returned to the 'Claygate Badlands' I took things carefully as my front light was not as good as my dynamo one. More withering looks!

Just before Hampton Court we said goodbye to Zoom Zoom. It was lovely to see him again and I hope I see him again on another ride soon. Pressing on we passed through Richmond where lots of people, who should have known better looked worse for wear. At Kew Gardens the ride was over and we said goodbye, going our separate ways.

This was an excellent little ride and the pace was good too at 13.4 mph which I enjoyed. I have replaced my bracket for a new one and ordered a couple of spares just in case. I will finally change over the 44t chainring for a 50t as I hate the 44t. I have said this to myself for ages as I tend to keep spinning and spinning. The 50t or perhaps going back to the 54t will suit me better, even though the 44t was supposed to be my tourer.

Many thanks to all my fellow riders and especially to David who again guided us safely and kept us going at a good pace.