The past few weeks have proved to be quite difficult and as such I have had little motivation to go on any Brompton adventures. The Whitstable Winder is an annual ride organised by my good friend Mark (King of the Hill). I have been on the previous two and this years ride was scheduled for yesterday. Up until as late as Thursday I had resigned myself to not going but feeling that getting out on my Brompton might be exactly what I needed I decided to go.

The meeting point was Trafalgar Square at 07:00. Setting off bright and early I had a ride of about 4ish miles to the start. When I got there Mark and Dr Chris were already and waiting. The plan was for the three of us to ride the 29 miles to Otford while those not mad enough to join us would get the 09:22 train from Victoria to meet us at Otford Station by 10:00. This meant that Mark, Dr Chris and myself would cycle 80 miles while the others would do 50 miles.

We rode at a good pace but nothing too silly - we had 80 miles to complete after all. When we needed to we stopped for some water or snacks but riding was purposeful. Eventually we started to leave behind the city and head out into greener areas and before we knew it, in to the full blown British countryside.

It was a warm morning and the forecast foretold of actually that with the prospect of light rain before luncheon. Stopping for some refreshment we were joined by some roadies on what was obviously a tried and tested route out of London into some stunning scenery. Every so often a lengthy peloton of bikes would pass us and the occasional greeting was shouted out as they went past. 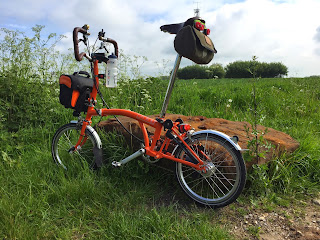 A little after 08:00 Zoom Zoom sent a text to Mark asking if the ride was still on. Mark stopped to phone him to inform that it most certainly was and with this news Zoom Zoom said he was coming. I was pleased about this as Zoom Zoom is a great character and a lovely gentleman.

Mark, Dr Chris and I arrived at Otford at about 09:35 which meant we could go to a coffee shop for some comestibles. Mark and I ordered a coffee and a pretty good carrot cake, while Dr Chris went for the class scone and jam. 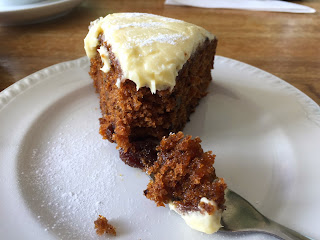 Feeling refreshed and ready for another 50 miles, we headed to Otford station where Zoom Zoom (with a brand new Brompton), James and Brian were all present and correct. James is a veteran of long distance Brompton rides and thinks nothing of taking his bike on pan European adventures. Brian is a fearless Bromptonian who is the same Brian who sustained a complete rear wheel failure on the overnight London to Southend ride not that long ago.

The ride out of Otford station was straight up a hill. This was definitely a feature of the ride and they were aptly named 'undulations' by Brian. There were certainly a great deal of undulations believe me but liking the challenge of a good hill I enjoyed them immensely.

After a few miles the weather turned slightly and haze in the distance hinted at rain. The countryside was stunning and Kent famed for its picturesque views certainly delivered. 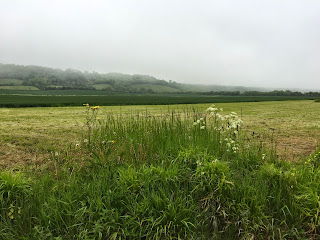 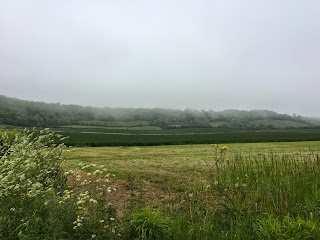 We cycled through lots of small villages with quaint little houses. Lots of the locals were out walking their dogs or coming back from buying a newspaper. Where possible we would shout out a 'morning' as the sight of six Brompton riders disturbing the peace of an historic village might have been likened to Hells Angels marauding through middle America perhaps? 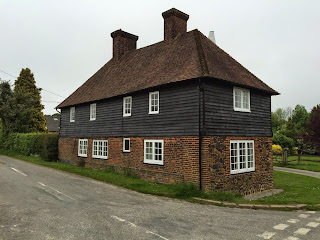 Another feature of out ride through Kent were oast houses. Oast houses with their distinctive hat-like roofs were used for the drying of hops, which in turn were used in the brewing process. 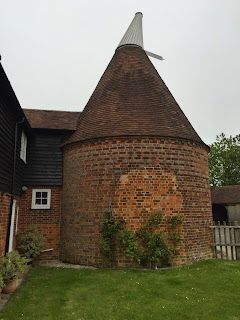 Although located in other parts of the country there are generally associated with Kent and the surrounding area. 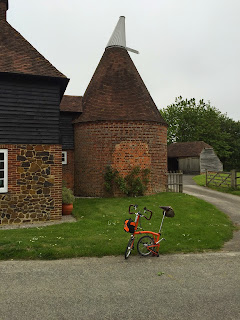 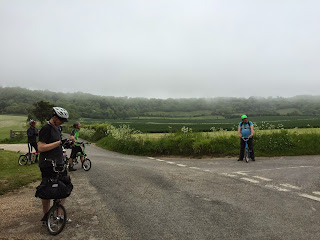 A wrong turn lead us to an expected treasure. I think it was Dr Chris who spotted a National Trust sign informing about Coldrum. Further investigation revealed that we had come across an ancient burial chamber dated to about 3,000 BC. 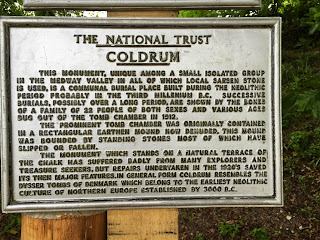 Leaving our Brompton bikes parked, we headed for a closer look. I must confess to feeling a little like a Victorian explorer stumbling upon a great artefact. 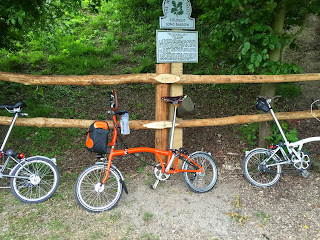 Coldrum is one on the best preserved megalithic tombs in Kent. Looking out to the Medway Valley the four large sarsen stones that make up the the rectangular burial chamber makes for a stunning sight. Out ancient ancestors certainly knew how to choose a prime location. 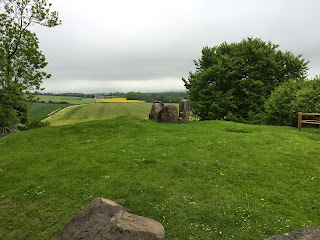 As I came down the stairs and back to my bike I could not help but think I would not have know such a location existed if it had not have been for my trusty Brompton! 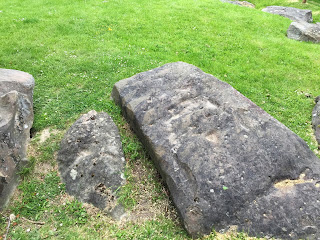 The picture below was taken before we embarked on a section of off-road cycling to get us back on track. As I think of what I can possibly type about this part of the ride, a shiver runs down my spine and little in life prepared me for what was about to follow... 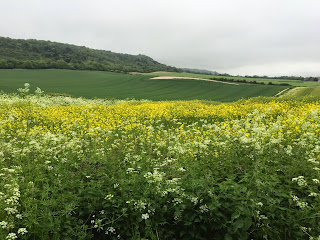 As various navigational devices informed that we needed to go 'this way' I can assure you 'that way' didn't look too promising. What lay in front of us was a forest where I doubt few people had trod in several years. It felt remote...dangerous and I assert we must have been the first ever people to cycle down there on Brompton bicycles!

The ground was muddy with large pot holes. Tree roots got in the way and large stones or should I say boulders lay in wait to catch the unsuspecting Brompton user. It was terrifying. What was worse was the prospect of getting ones Brompton dirty!

I felt for poor Zoom Zoom with his gleaming, brand new Brompton. It was not long before I had my beloved Orange Brompton over my shoulder and walked gingerly trying to avoid mud, pools of water and possibly small mammals. It was awful and it felt like one of those Bear Grylls television programmes were he is dropped at an inhospitable location in order to escape back to civilisation!

At one point in proceedings there was a huge body of water everywhere and the only way to ford it was via small stones. With my Brompton on my shoulder I tiptoed across the stones like a Prima ballerina on points. Making it to the other side someone a considerable distance ahead indicated that the end was near.  With my heart lifted I headed for freedom.

Using the tools of nature I grabbed a stout twig and got to work on trying to removed the caked mud in my wheels. Spinning the wheel, holding the twig at an angle to get the mud off was like the potters wheel in 'Ghost' as strange swirls and patterns formed.

Sadly, this sense of liberation did not last long as having traversed the forest section we now had to cross a section covered in menacing stones and crevasses. The best description I can muster is the arid plains of Tibet. Finally the open road was spotted and I experienced joy. 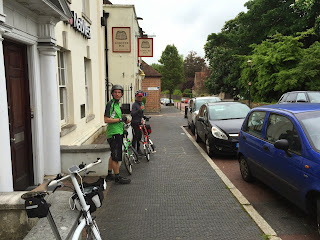 The drama was not quite over as we had to go through a redistricted byway. This started off quite narrow and towards the end was almost impossible to cycle through. 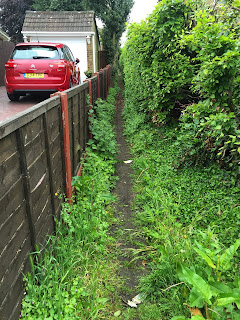 Incredibly a sign indicating that this was a redistricted byway indicated that said byway was for horse and carriage, horse cyclists and pedestrians! 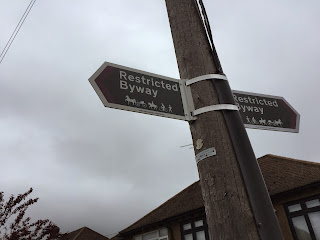 Crossing the ride River Medway meant that we weren't too far away from our lunch stop. With such wonderful views I wished that I had taken one of my big cameras but my iPhone made a pretty good substitute. 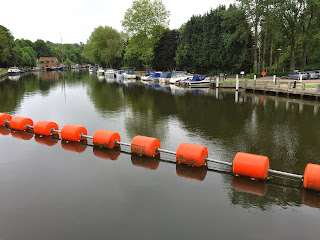 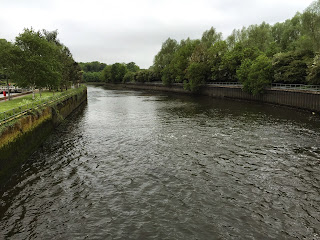 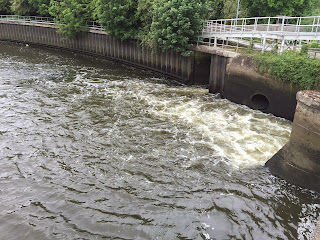 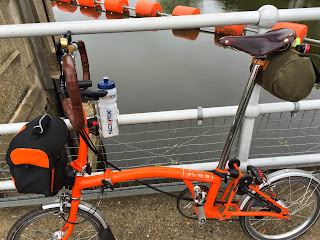 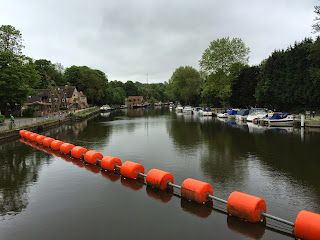 We stopped for lunch just before 13:00 and were able to relax, take on fluids and refuel. With the dreaded Holingbourne Hill still to come in what was already a hilly ride, this was quite important! Brian's rear wheel which had been making a slight noise was inspected and the noise was due to a few loose spokes. These were tightened by James but we all thought that it should not have happened to a wheel so recently repaired. 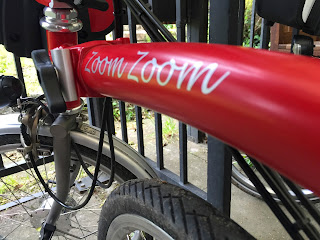 Hollingbourne Hill is just over a mile of climbing with a maximum gradient of about 8%. This may not sound like a great deal but it is a formidable and unforgiving stretch. James was off into the distance as was Mark (well he is King of the Hill after all). I followed and took things as steadily as I could trying to maintain a rhythm. Soon I was using the lower bar position of my beloved P type handlebar which helped me get my weigh forward.

The last little section was very steep but with a final push I made it all the way up without a foot down. Soon after the others followed and Zoom Zoom who was able cope with most hills on his former 3 x speed Brompton, looked even better on his new 6 x speed titanium. 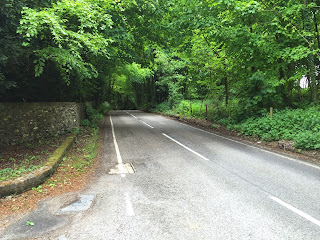 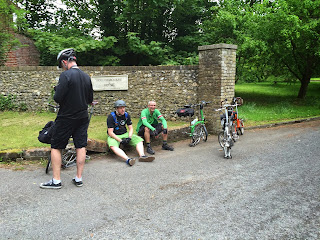 At the top we rested by Holllinbourne House and waited until all had the opportunity to recover. 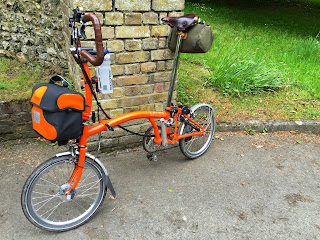 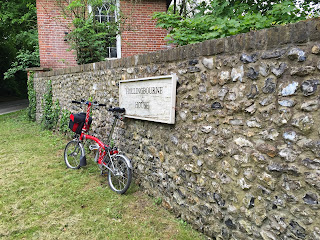 At the top of the hill Brian discovered that the ping he heard going up the hill was a spoke snapping. As on the Southend ride, Brian was unflappable, stoical and calmness personified. He carried on with another 20 miles to go.


Almost immediately after Hollingbourne Hill there was another hill I recall from last year that was shorter but much steeper. If I remember correctly it was so steep I had to walk up towards the end. Thankfully this year it did not beat me.

With the back of the ride broken we pressed for Whitstable. As we approached Graveney Marshes memories of great night rides to the coast came flooding back. On these we approached Whitstable in the early hours of the morning, dawn chorus still playing and the sun making itself known.

The strong headwinds - always a part of the approach to Whitstable - made things heavy going and my speed dropped considerably, perhaps due to the fact that I had cycled almost 80 miles.

With 79.96 miles logged on my Garmin 810 I cycled around at the end of the ride until the magic 80 miles popped up. We had done it. The only thing that remained was to partake in some fish and chips. These were consumed with enthusiasm and near silence.

With a farewell to Whitstable we headed for the station and the train to London. With moments to spare we boarded our train. Saying goodbye to James and Dr Chris, Mark, Zoom Zoom, Brian and I got off at Faversham so we could get the train to Victoria.

At Bromley South we said goodbye to Mark and at Victoria Zoom Zoom, Brian and I parted company too. (Brian made it all the way with one less spoke and in my book deserves Man of the Match). 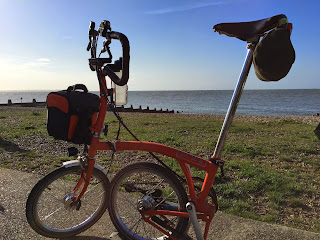 As I cycled home I felt a little more like my old self and was glad that I went on this ride. Thanks to Dr Chris, Zoom Zoom, James and Brian and special thanks to Mark for organising and leading the ride. 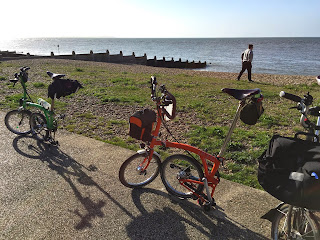