Hills of North London on a Brompton

Today I was up bright and early for the 'Hills of North London' ride. Having tackled some of south London's finest, it was a good opportunity to sample what north of the river had to offer.

The meeting point was the London Eye at 09:30 and I made pretty good time. Weather changeable as ever couldn't really make its mind up.  I woke up to glorious sunshine but by the time I had said goodbye to Mrs Orange and the Orangettes it was cloudy and looking as if it would rain.

The brave few were assembled at the Eye and even though only 09:30 the Southbank was already starting to get busy. Looking skyward I saw a flight of cormorants who looked pretty keen to get somewhere fast. 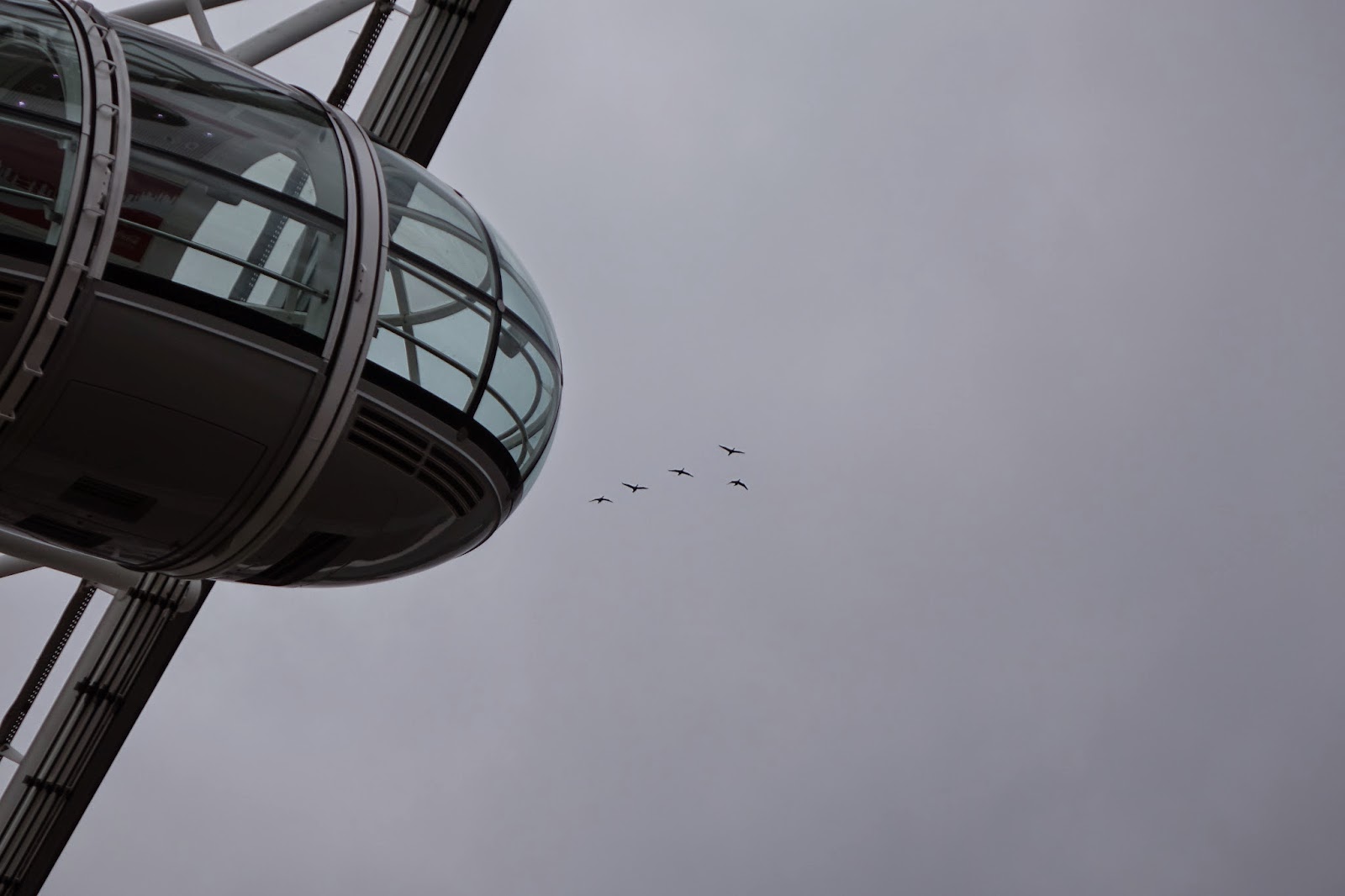 Shortly after 09:30 David - our ride leader -arrived along with Anne. It was good to see Anne again and she hoped that her knee was going to be up to tackling some meaty hills. 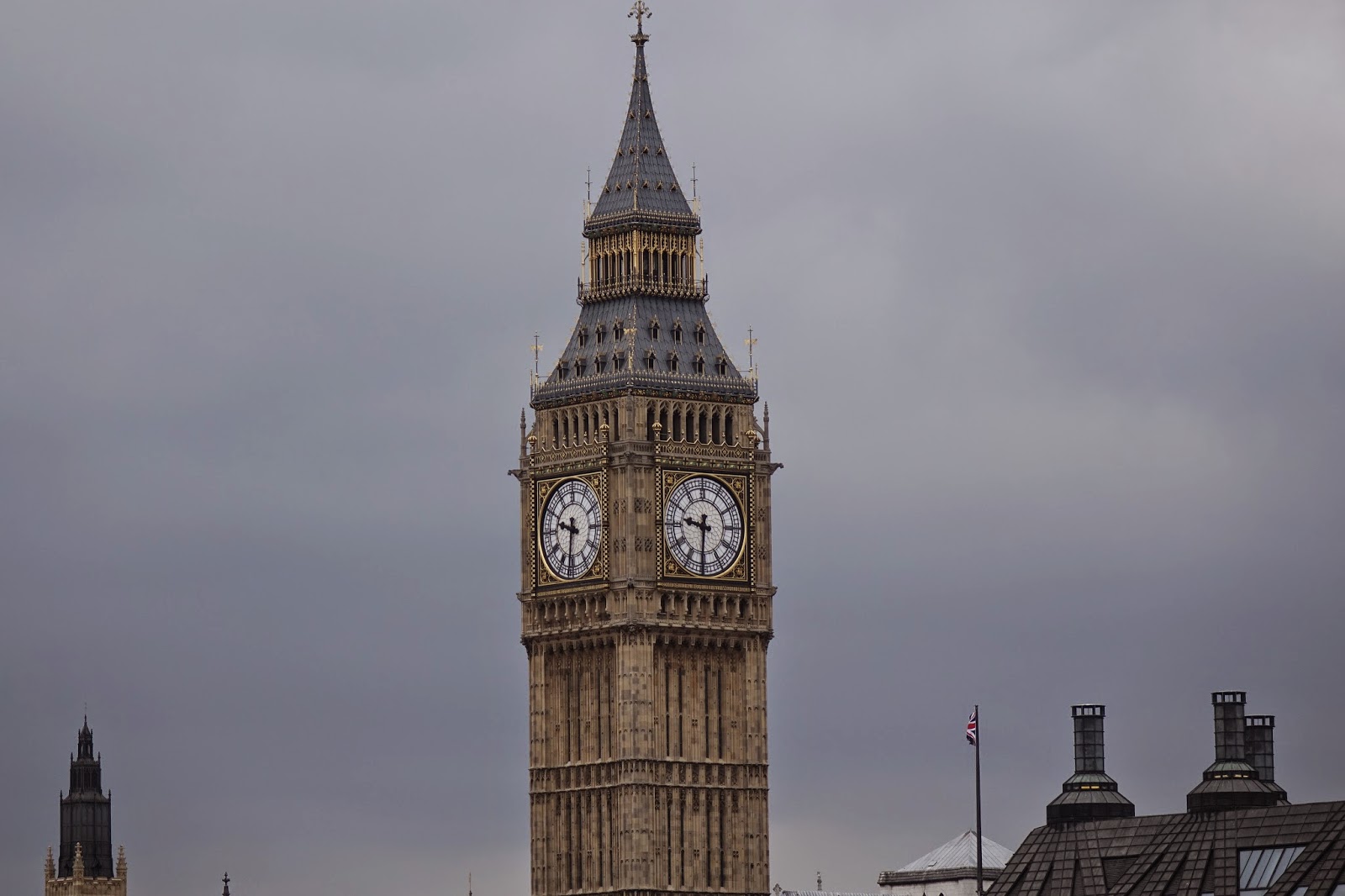 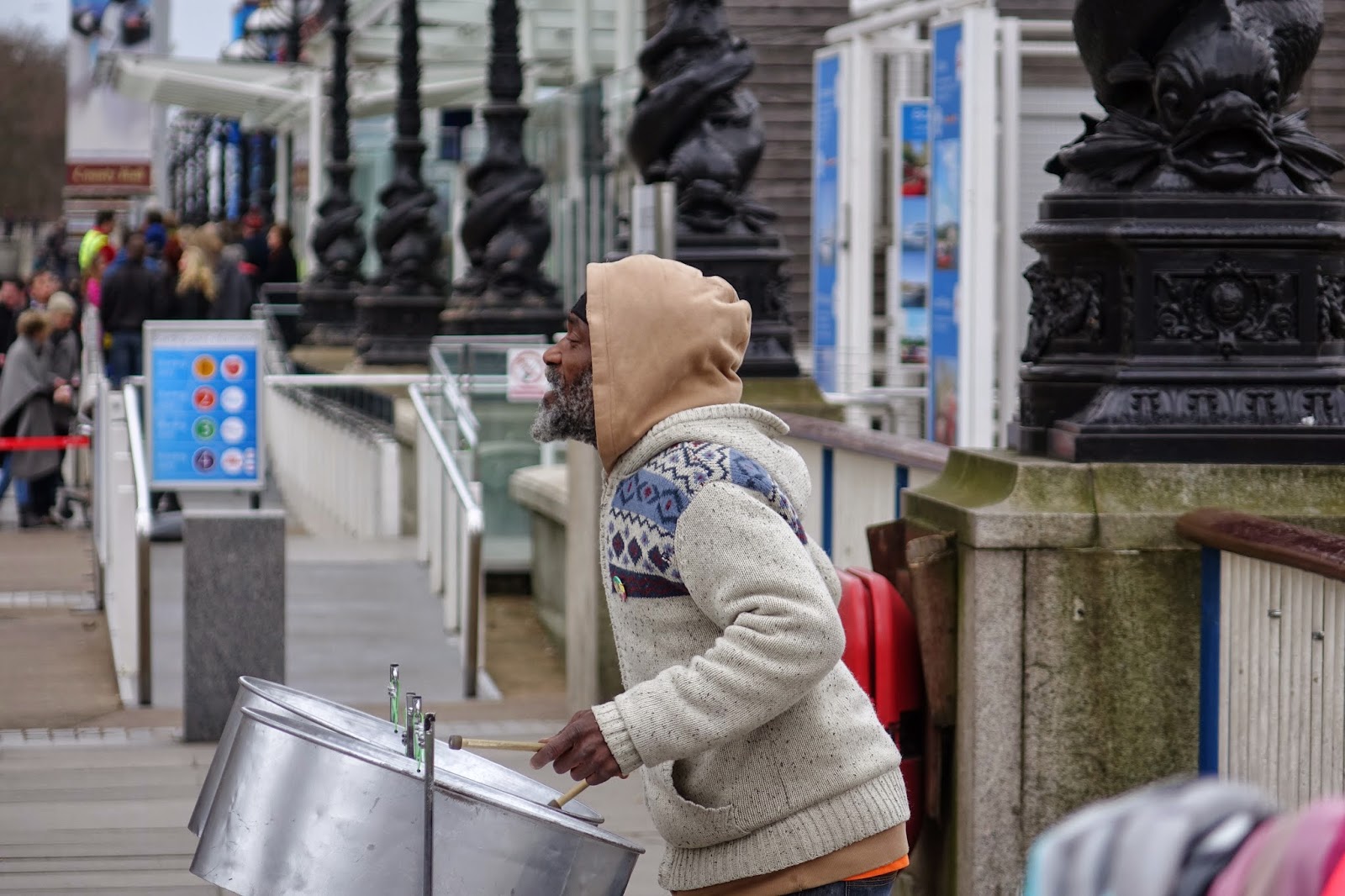 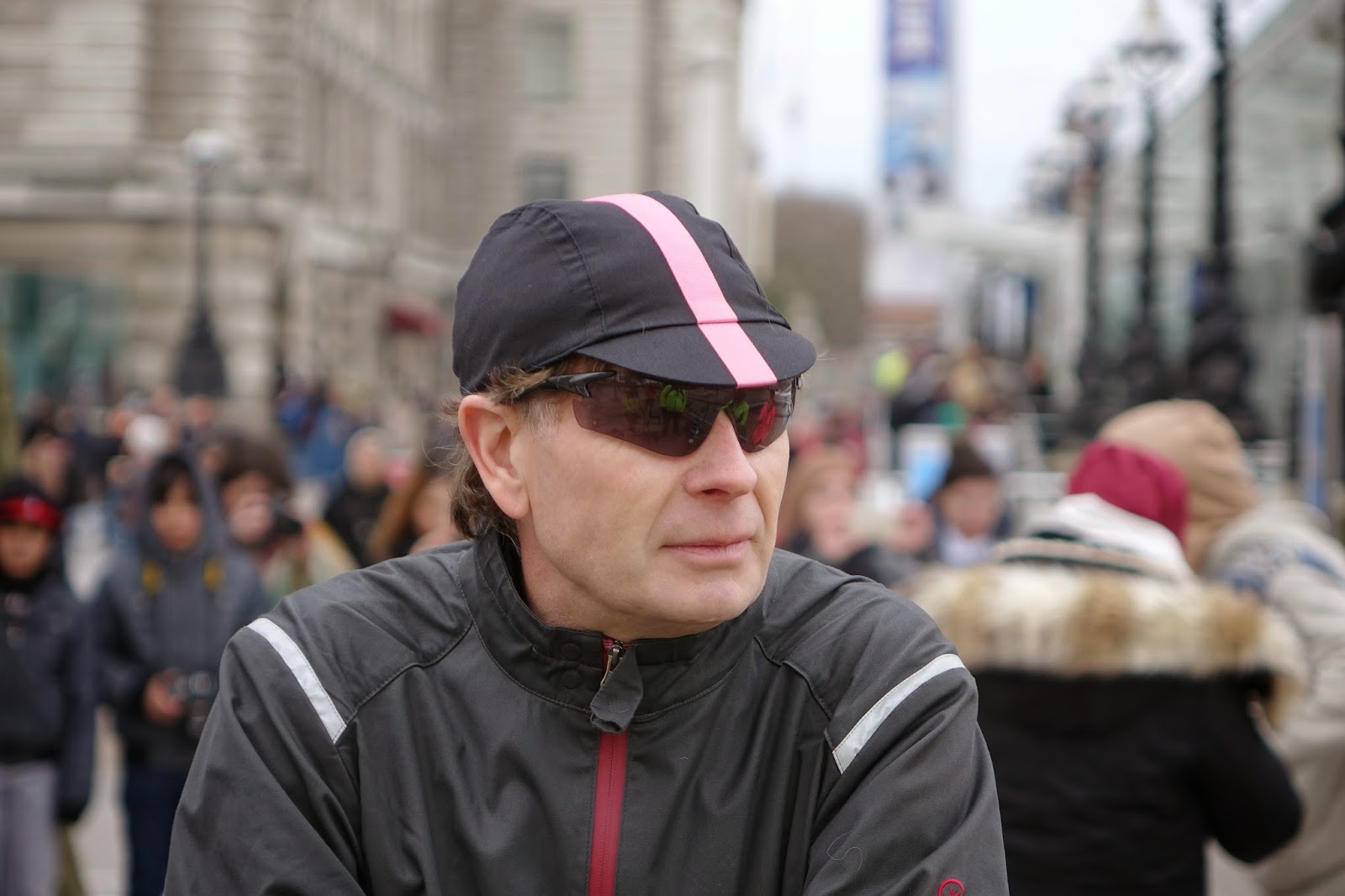 I had toyed with the notion of taking my Titanium Orange Brompton out for its first real outing for ages. Looking at my Brompton bicycles side by side, I just couldn't bring myself to leave my trusty P type at home. I have grown quite attached to this particular bike. It has been my go to bike for just about everything since I bought it. 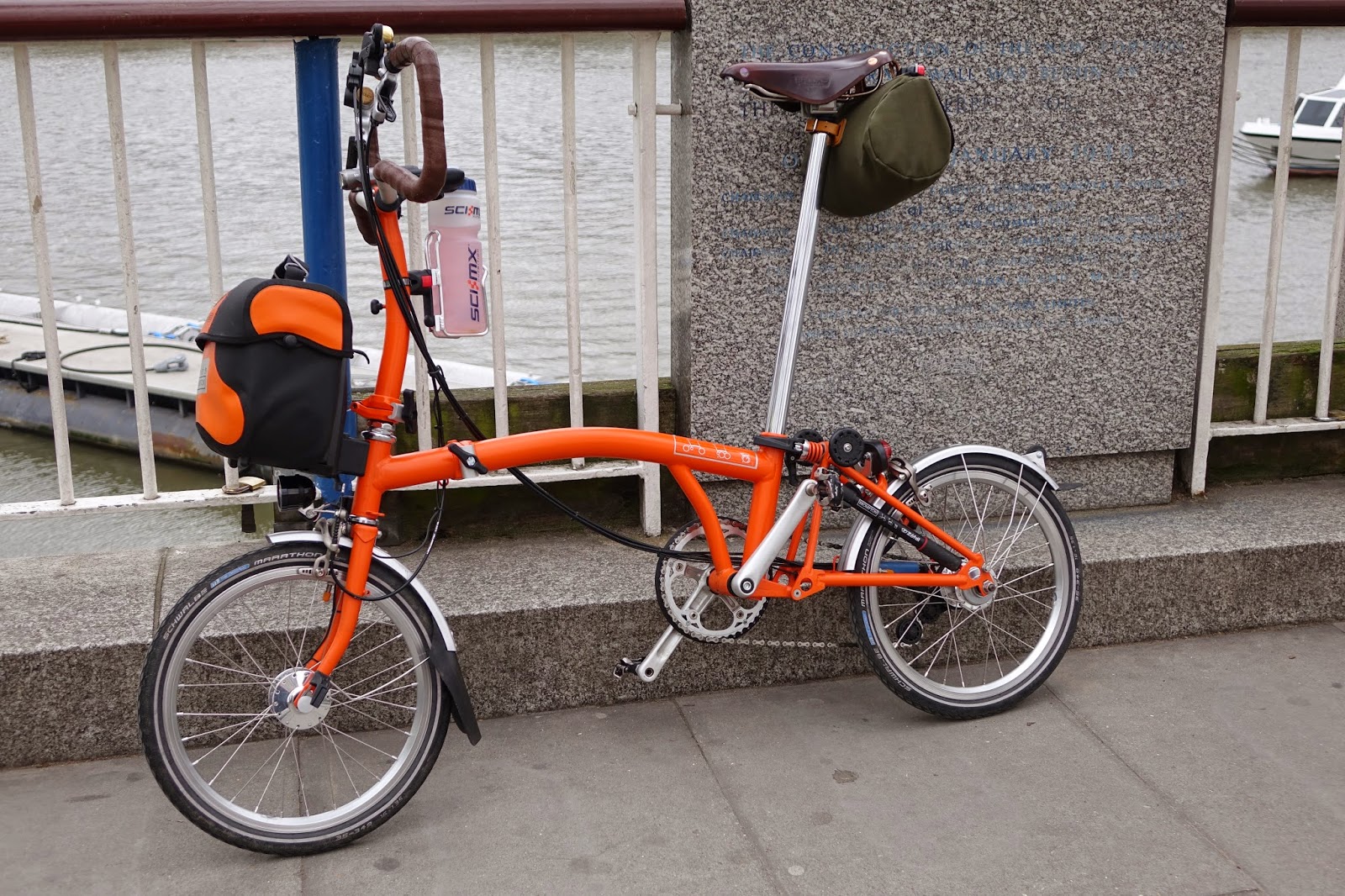 As we set off a few other cyclists were out and I spied a roadie with a rather fetching saddle and bars in Italian livery. 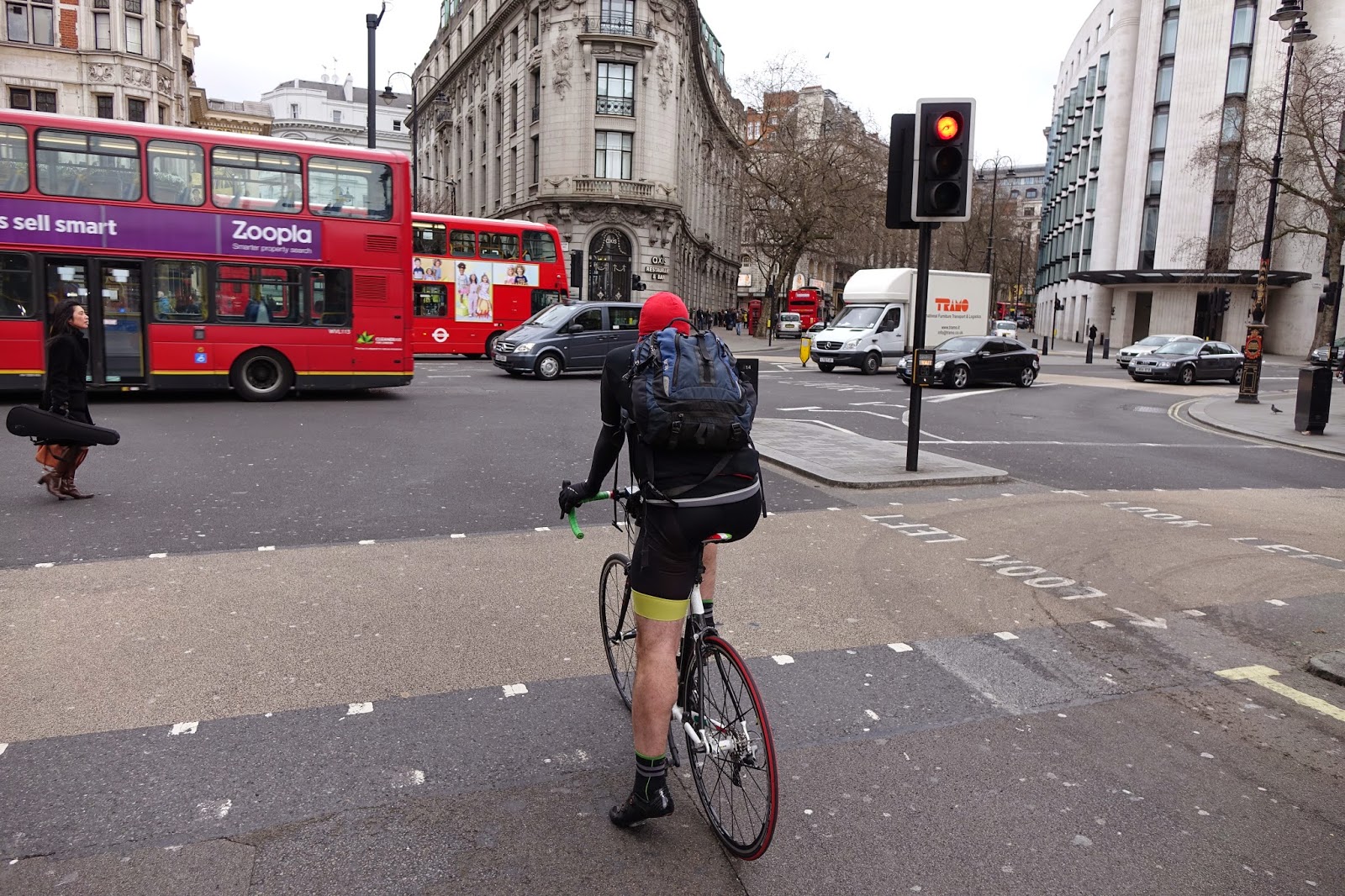 At one set of traffic lights an eating establishment called 'Chicken Cottage' came into view. This sparked a mini conversation about the many chicken eateries across London. There are copious variations of this theme: Chicken Shack; Chicken Shed; Chicken World and my favourite Land of Chicken. 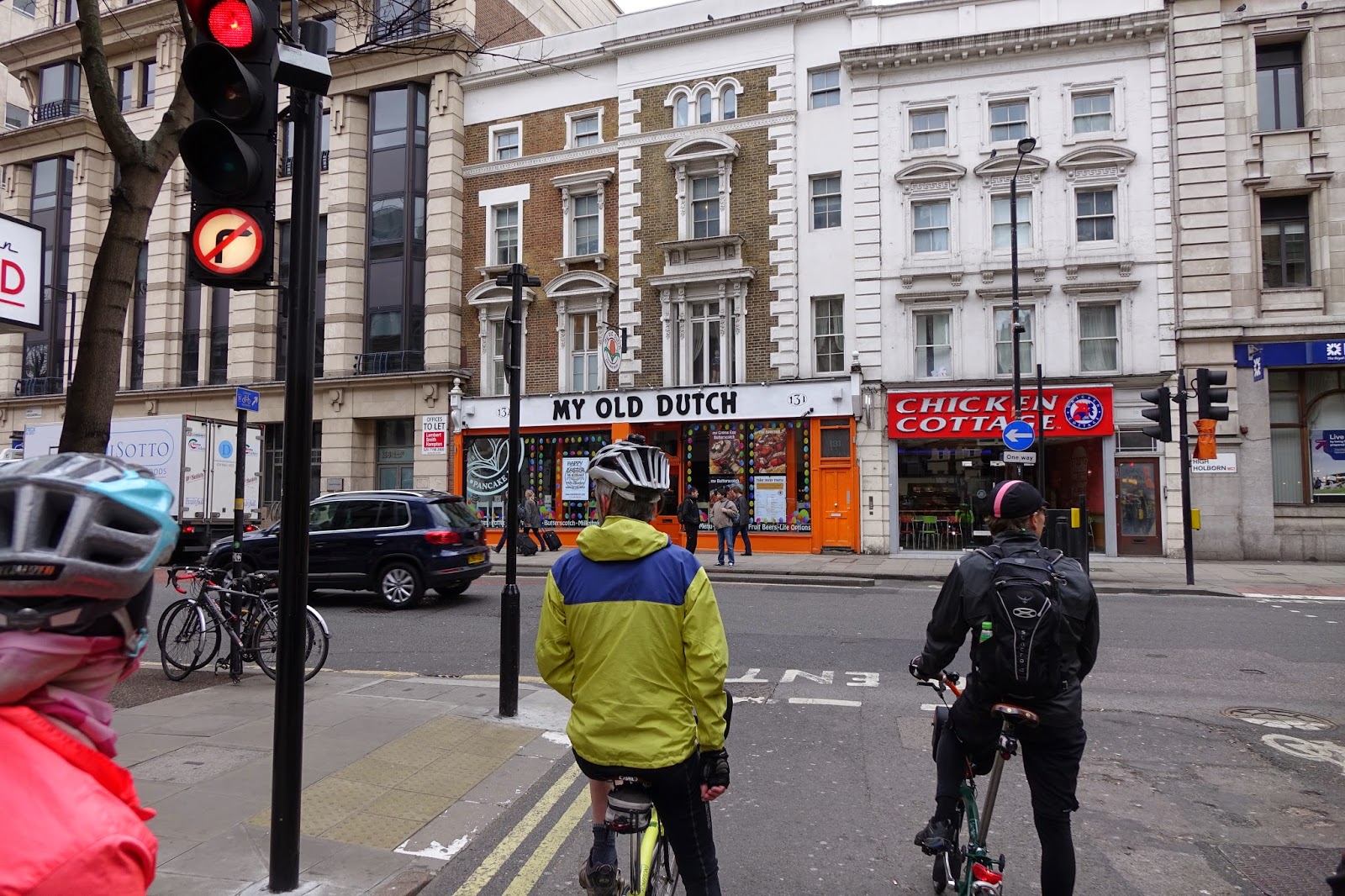 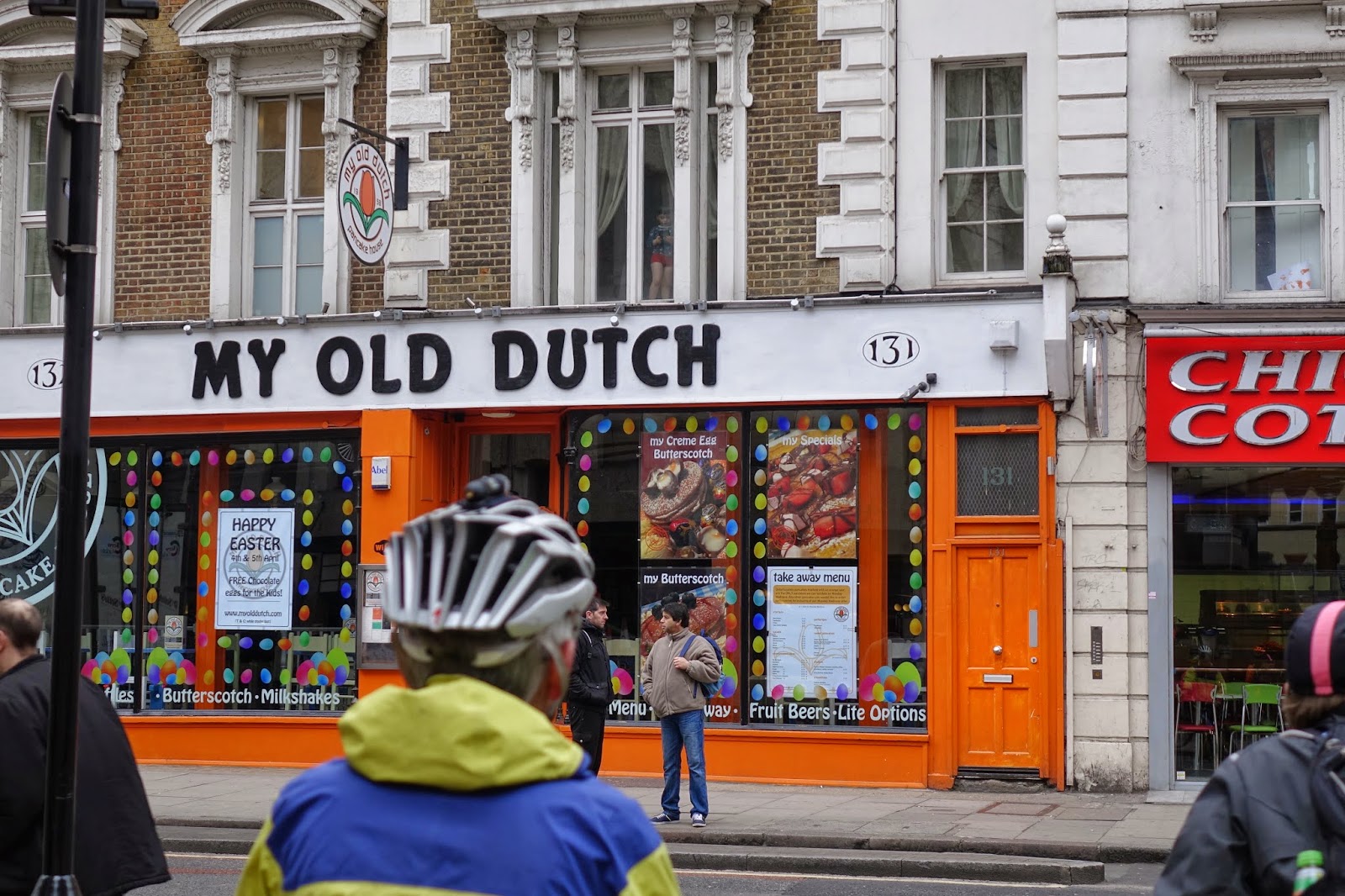 Passing the British Museum and some of the University of London buildings was familiar territory and it brought back lots of childhood memories. 'A friend' once told me how as a 13 year old he used to go to the British Museum frequently after the wonders of the museums of South Kensington had been exhausted.

Almost opposite the British Museum there used to be a magic shop. If you went to this shop you would often see the owner showing tricks to prospective buyers. Apart from conjurers tricks they also sold stink bombs in packs of three for 50p. 'This friend' along with another reprobate would stock up on quite a few packs and take them over to the Museum across the road.

I am sure you can guess what happens next in this shameful tale!? A small glass phial would be crushed under foot and a general sniggering could be heard from a couple of hooligans, up to no good  as the reaction of those nearby was surveyed from afar. 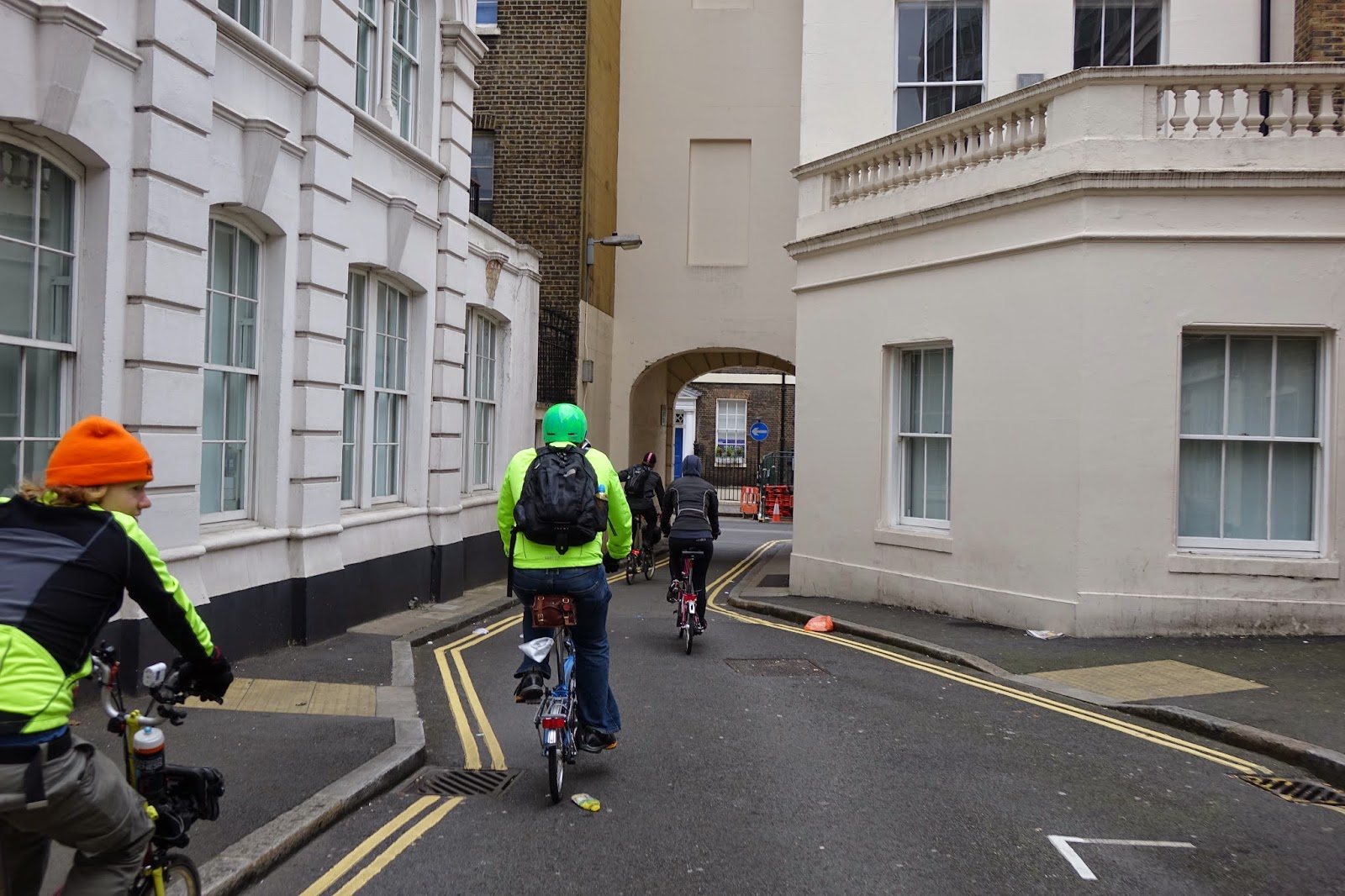 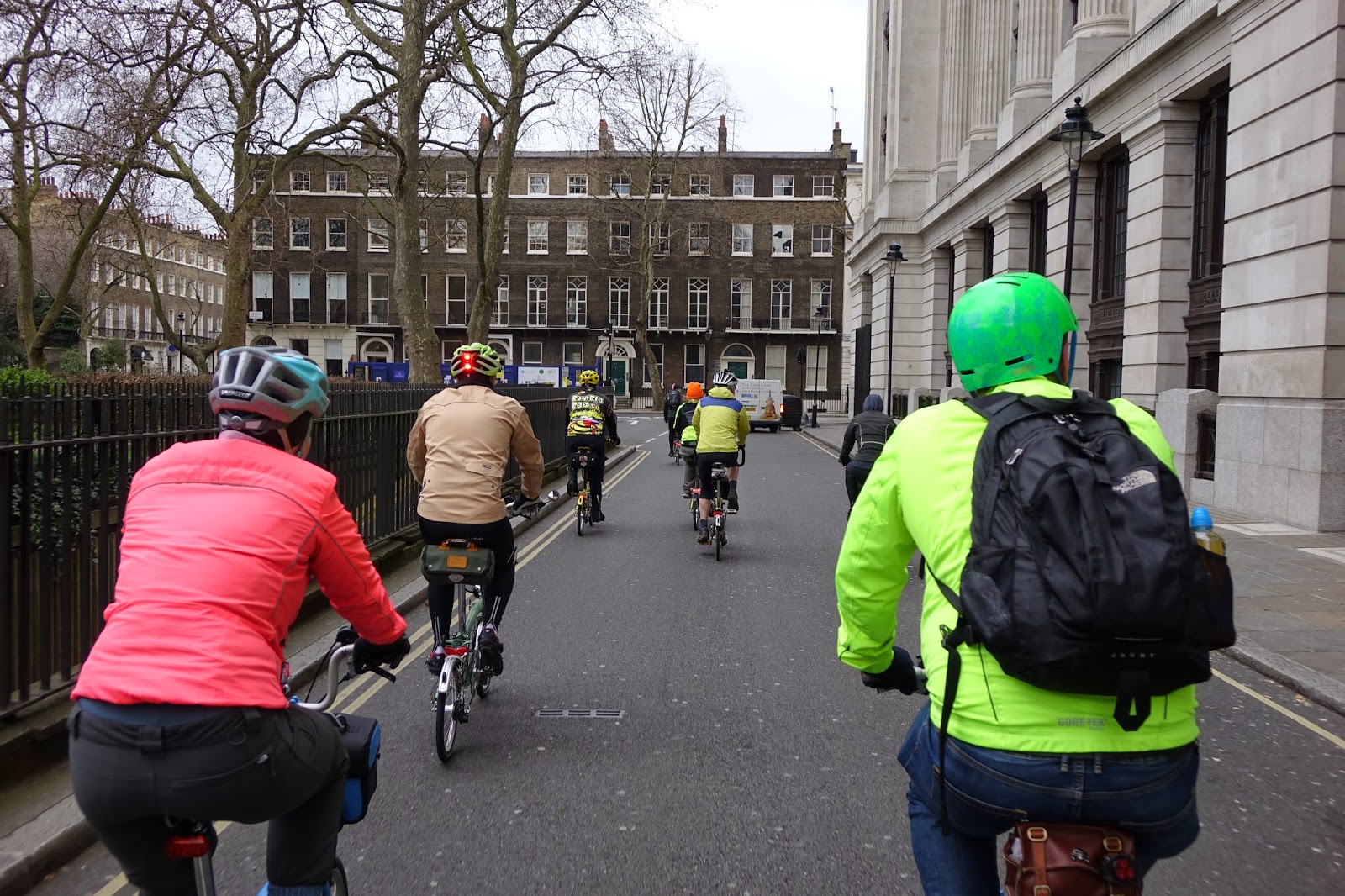 As we cycled on slightly busier roads the natural peloton formed and again the sight of Brompton bicycles cycling in formation was a sight to behold. Onlookers smiled, pointed or took a double take. 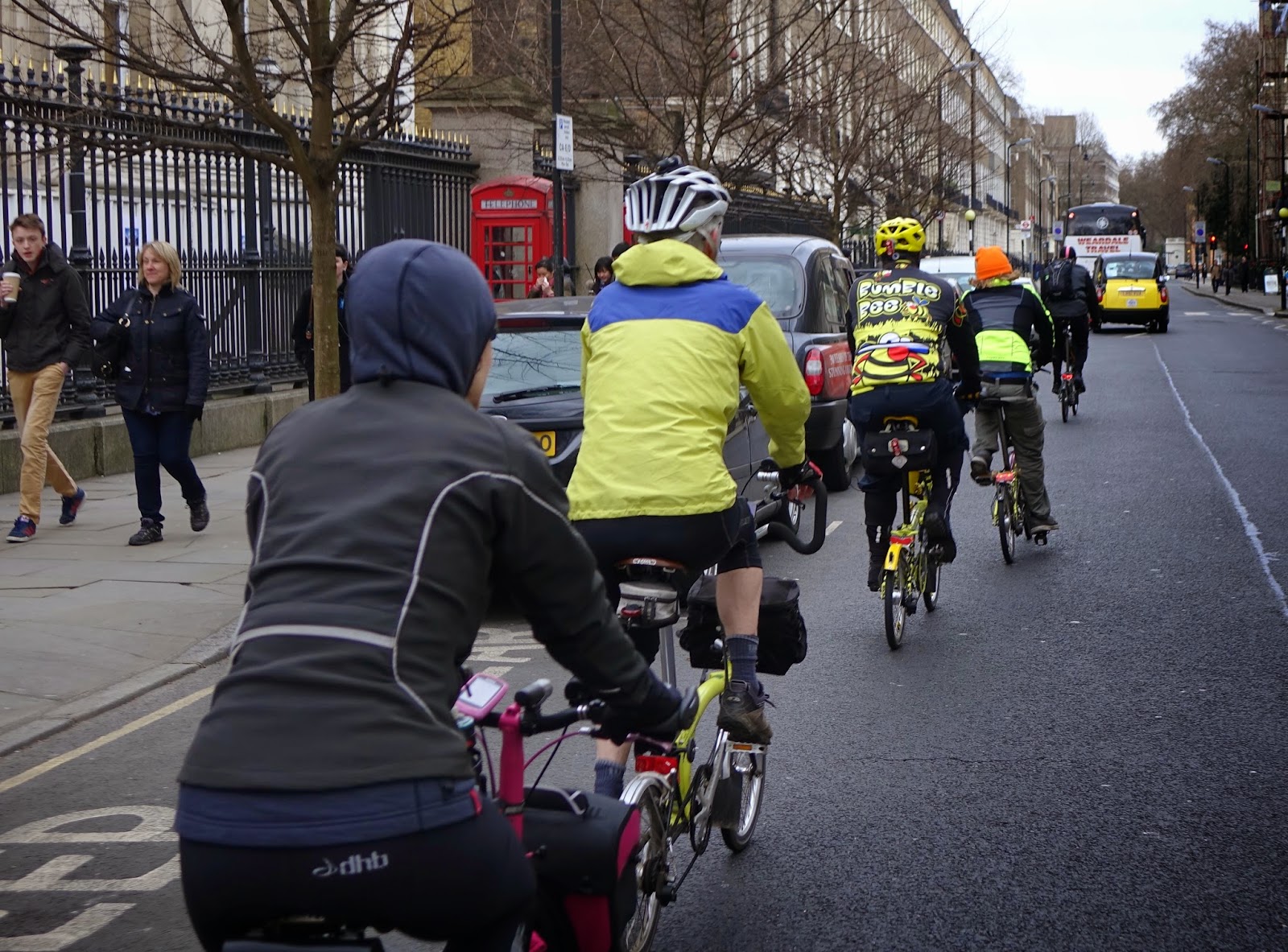 Before long the first of the big hills, in fact the biggest of the day 'Swains Lane' came into view. This has quite a reputation and it was going to be good to see if I could best it or if it would best me! 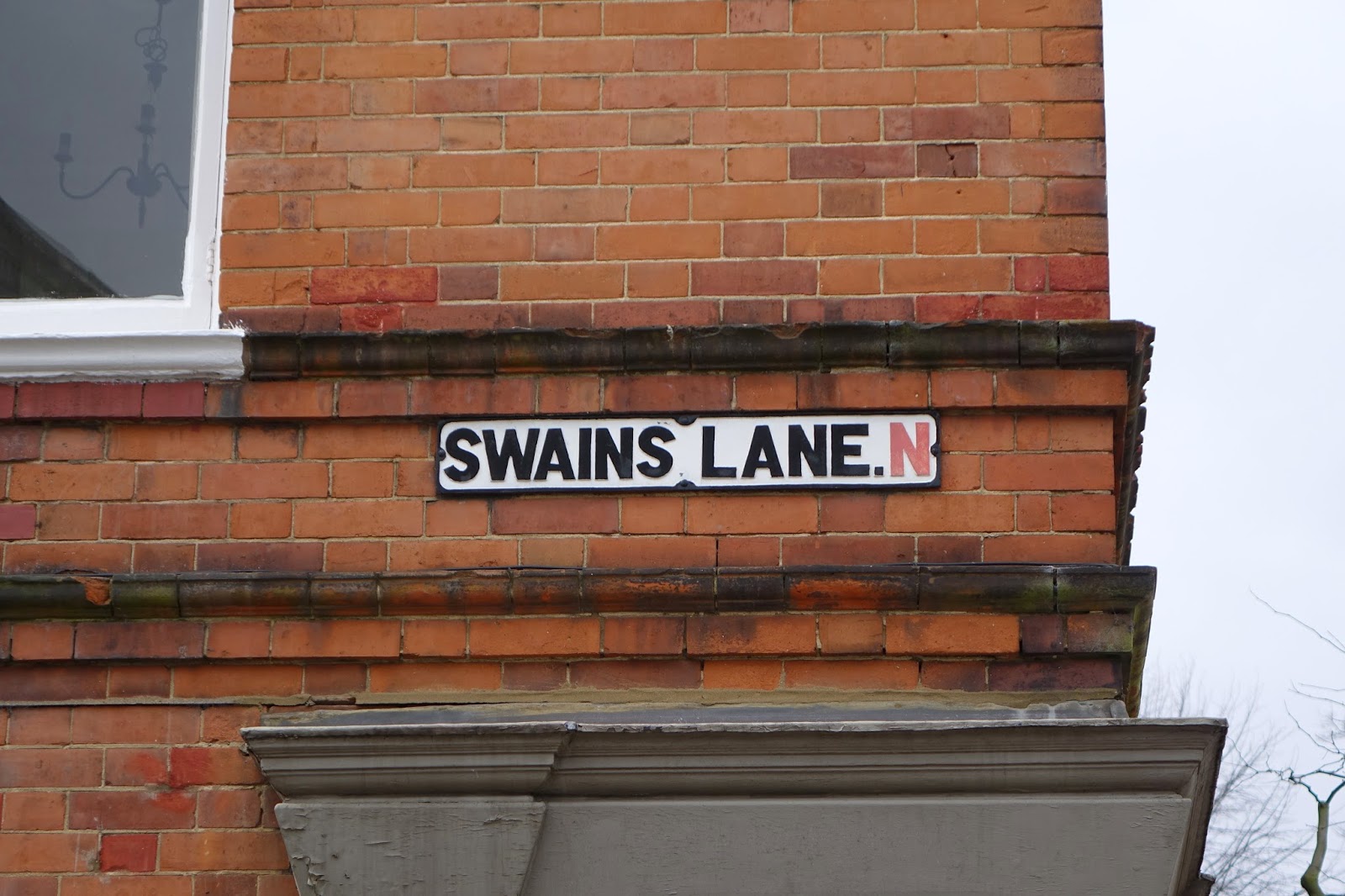 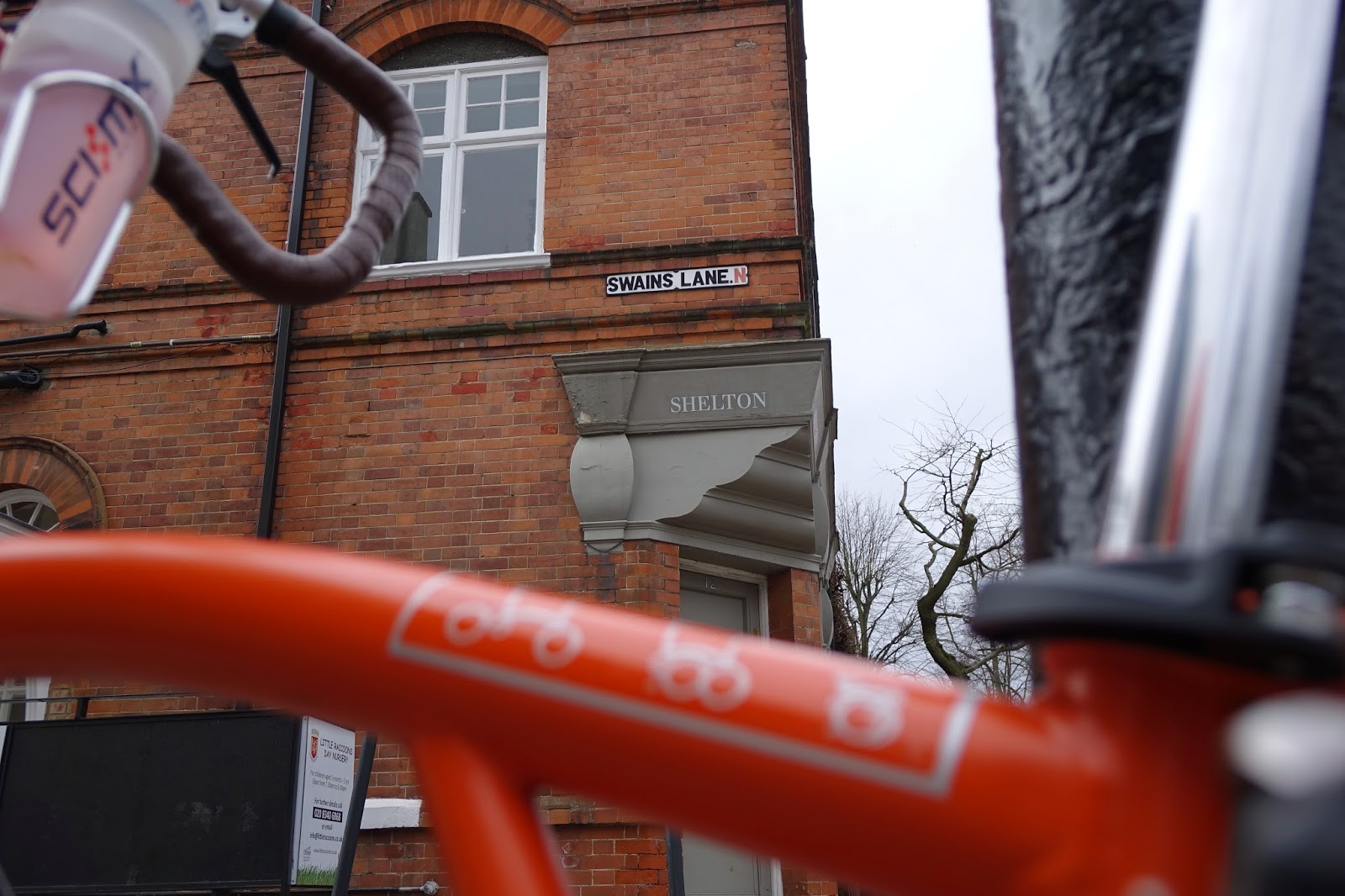 The start was pretty tame but the gradient soon changed and things were quite taxing. Swains Lane is just under 1km in length and has a height gain of 71 metres.  At times there is a 20% gradient and in the book '100 Greatest Cycling Climbs' it is rated as 4 out of 10. 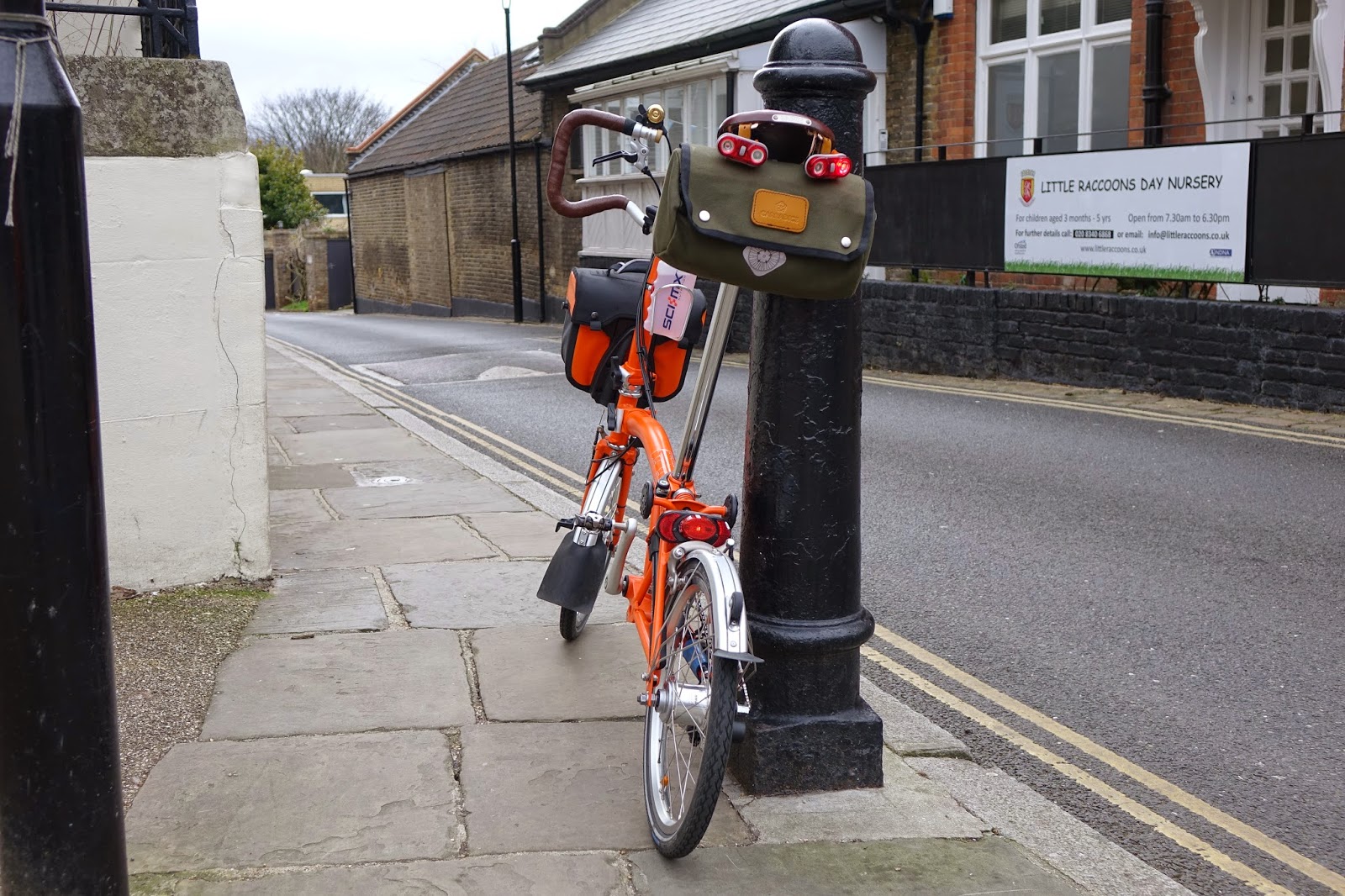 A few years ago I might well have been walking up Swains Lane but today it posed few problems. The only difficulty for me was that it was a narrow road and a large van was behind and wanting to overtake. The van driver was very polite and waited until it was safe but it did slow things down a little.

As I made my ascent Highgate Cemetery could be seen and a tall brick wall to my right added to the feeling that the road was a very narrow one.

David, who was under the weather motored up with ease as did Graham. Anyone who got up without a foot touching the floor did very well. A few walked part of the way - no shame in that - and can always tick it off another day. 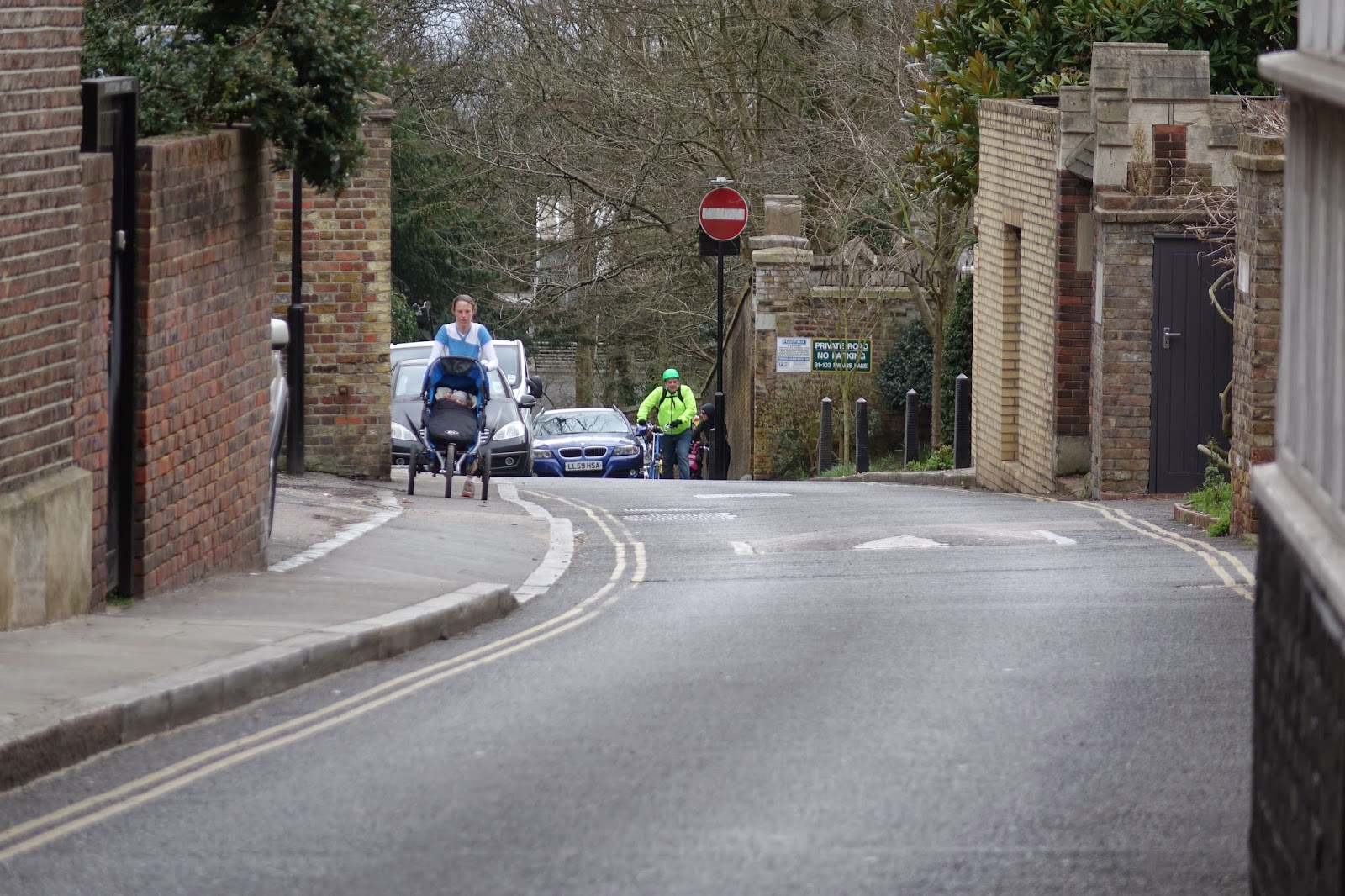 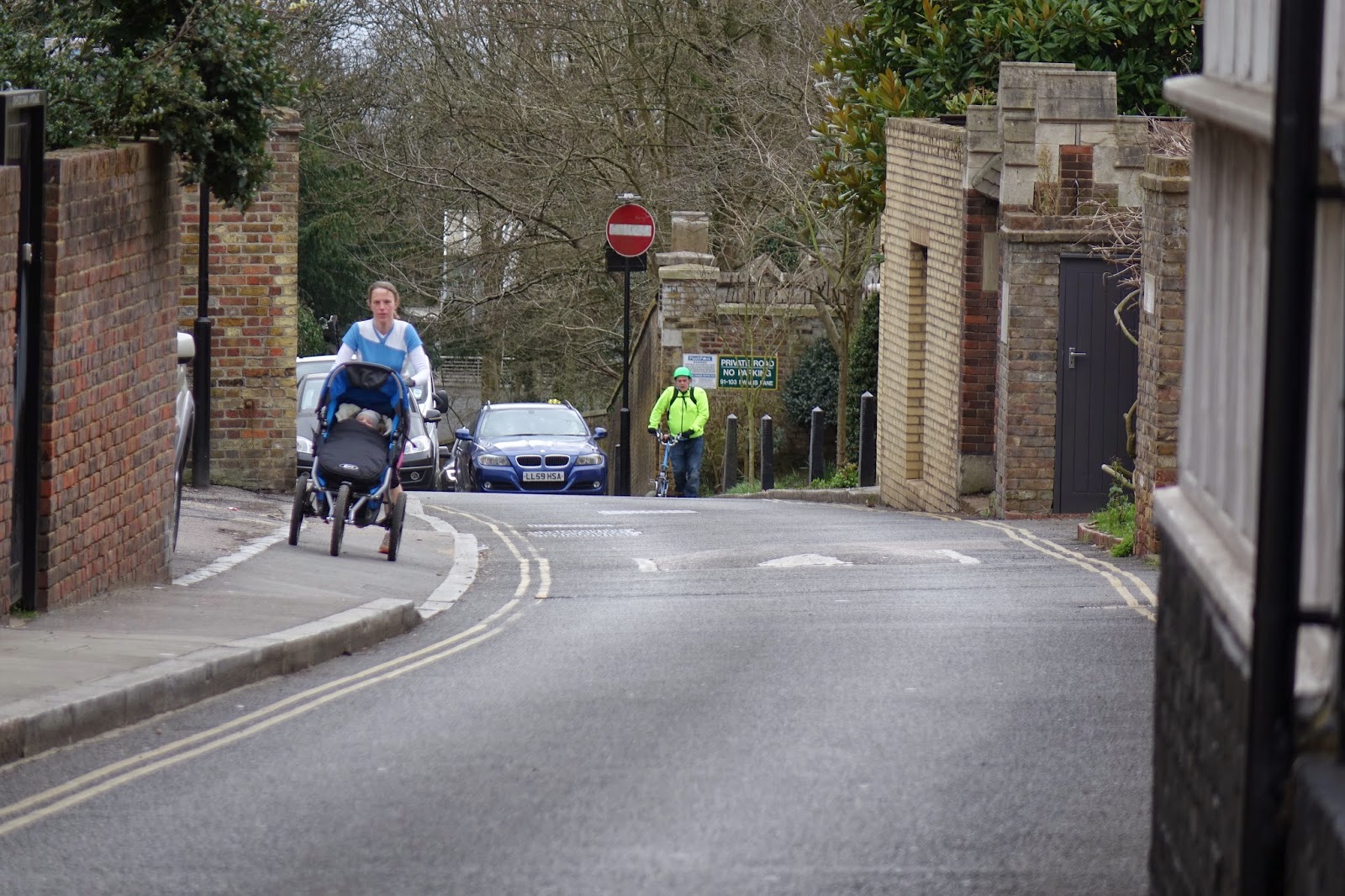 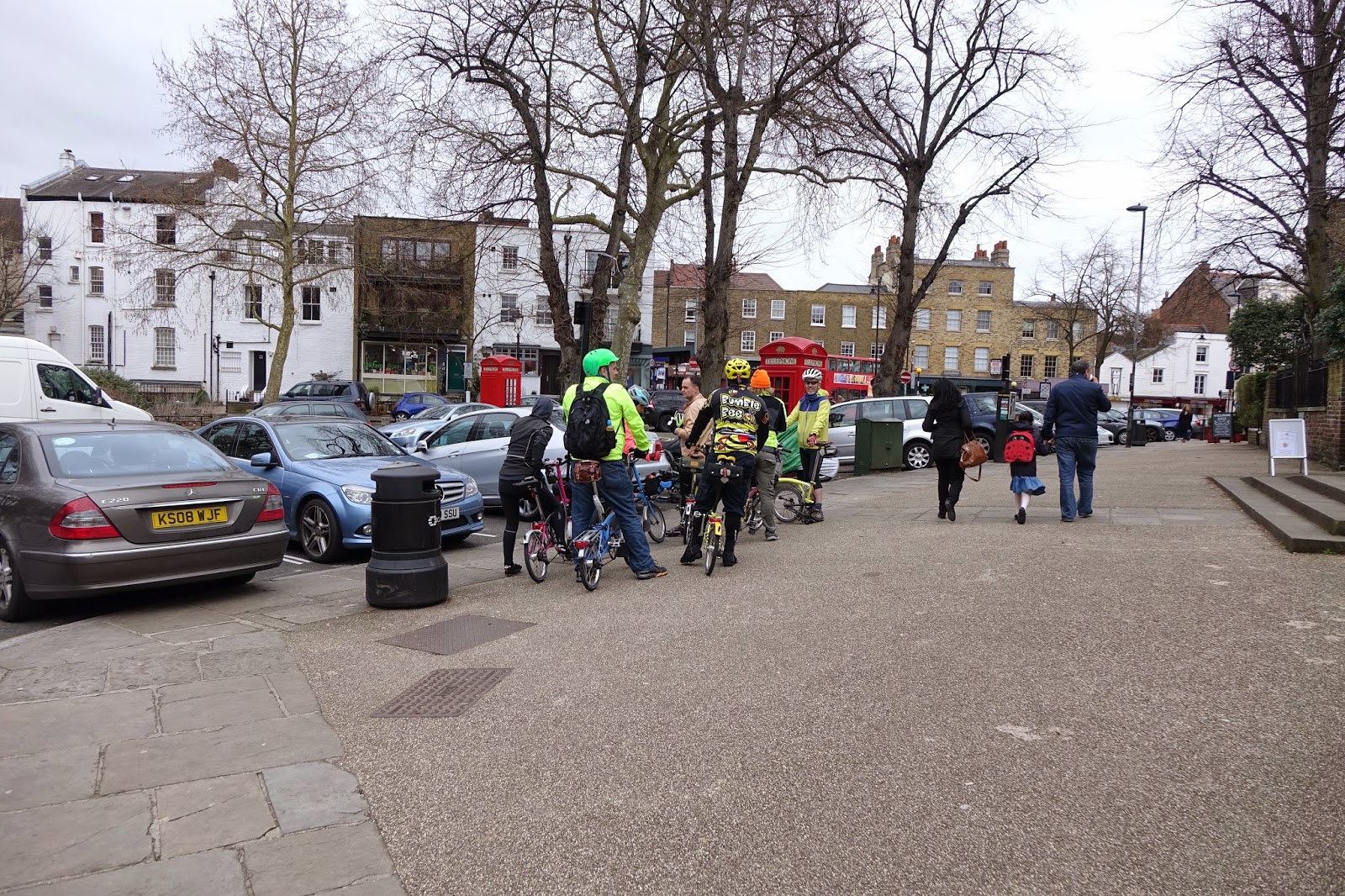 All in I still cycled just over 26 miles today which wasn't too bad. Thanks again to David for another great ride.